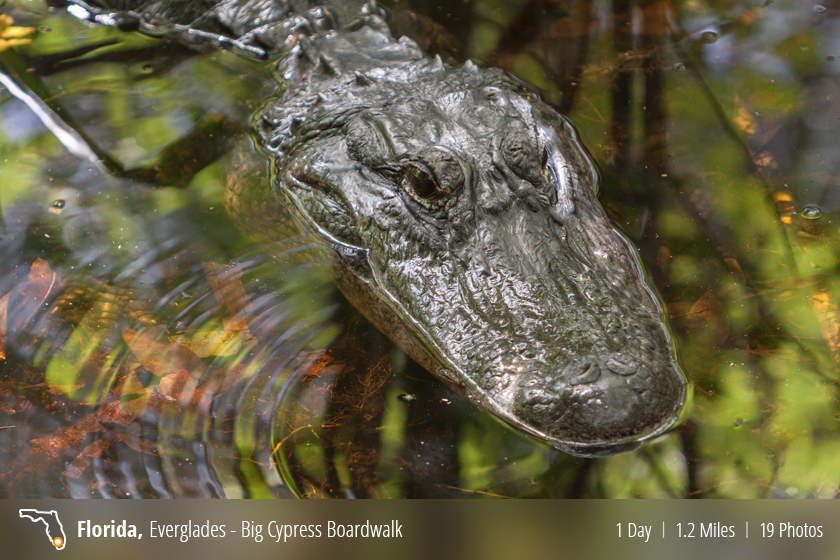 Big Cypress Bend Boardwalk is a 2000 ft boardwalk through the Fakahatchee Strand.

Slated as a “Registered National Landmark” the Big Cypress Bend Boardwalk meanders through the world’s only Bald Cypress-Royal Palm Forest. The boardwalk isn’t too hard to find, there is a rather large sign off to the side of the road. And the Online Guide to Florida State Parks does a good job of mapping out its location along US 41 / Tamiami Trail.

I have been down this boardwalk quite a few times, it’s distance from Naples makes it the perfect half-day trip. However this time I was driving back from a 4th of July vacation in Key Largo and decided to make use of the afternoon voyage home. 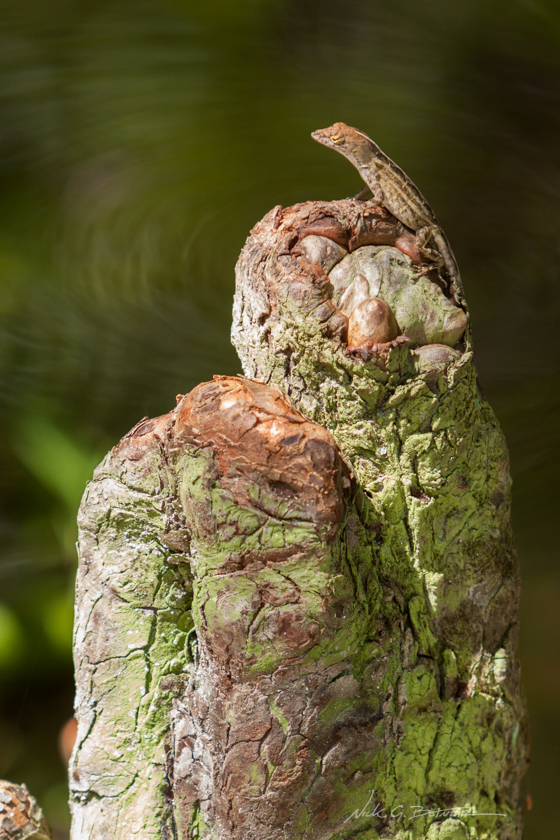 Parking is free and right off to the side of the road. As you first start out there is about 200 yards or so of shell walk. Either side is flanked by water filled channels. 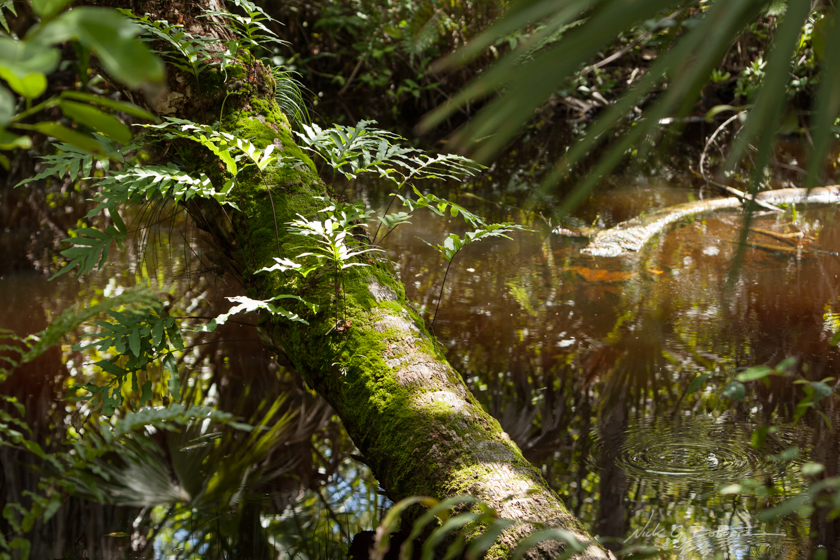 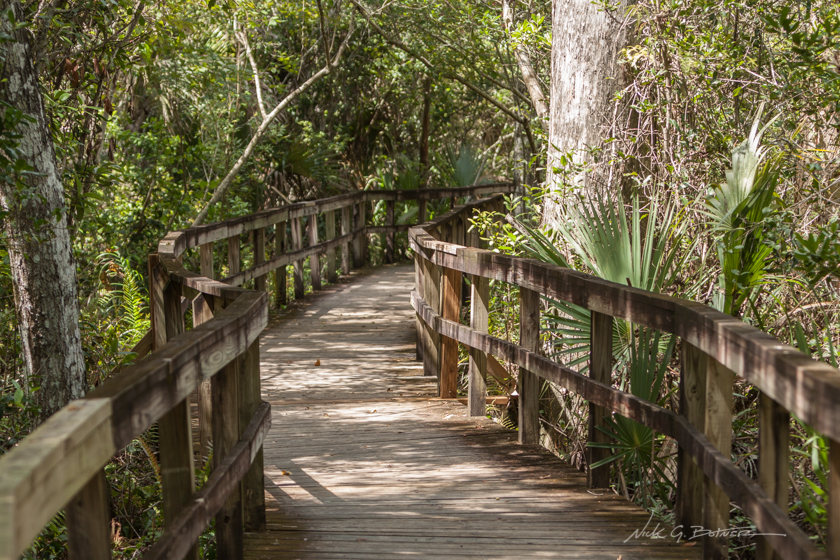 When you get to the beginning of the boardwalk there are some park benches and the monument declaring the site as a Registered National Landmark.

On this trip I was greeted by a couple hatefully leaving the boardwalk who informed me I better enjoy mosquitoes. Thankfully I don’t seem to mind them too much.

Progressing down the boardwalk it was evident as to why the couple were in such a hurry to leave. I was only a few yards down the trail and I was being absolutely swarmed by the buggers. The only place on my body without bug spray was my face and I was doing a good job of inhaling them through my nose and getting them under my glasses, nibbling on my eyelids. 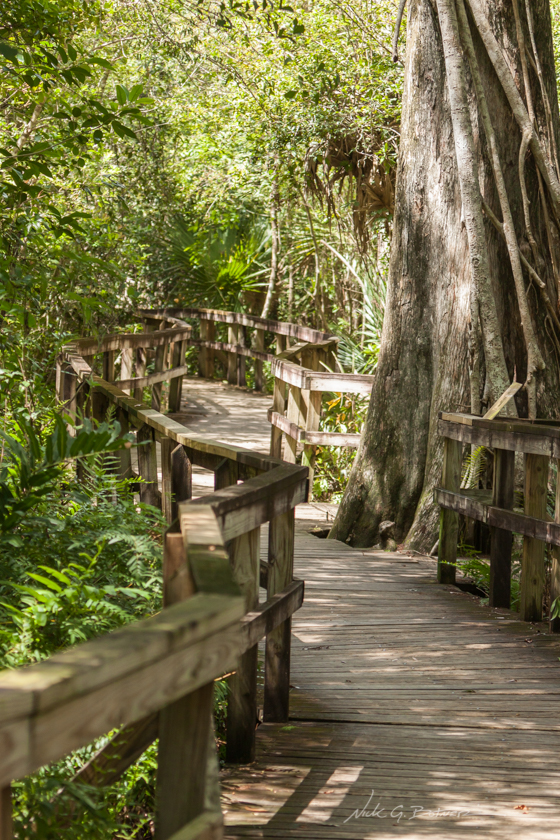 This beautiful and ginormous Bald Cypress is engulfed by the boardwalk. 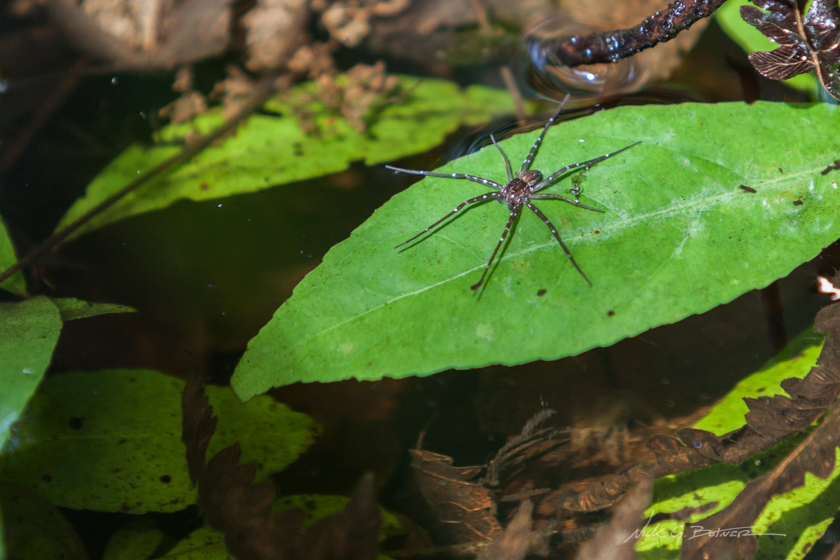 This time of year the boardwalk is surrounded by at least a foot deep of water. Which is also why there are so many mosquitoes.

This little Six Spotted Fishing Spider was actually below the water’s surface. 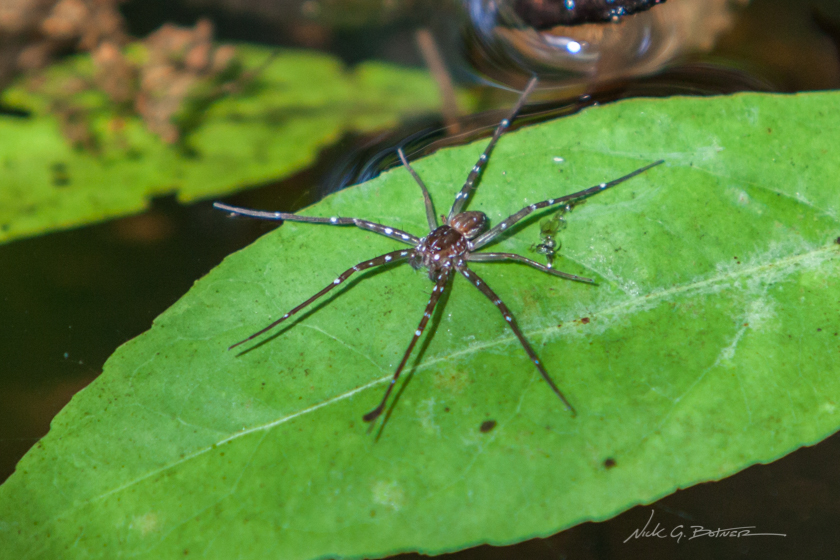 Here is a closeup, it’s still hard to tell, but it is below water waiting for some unlucky prey to swim by. 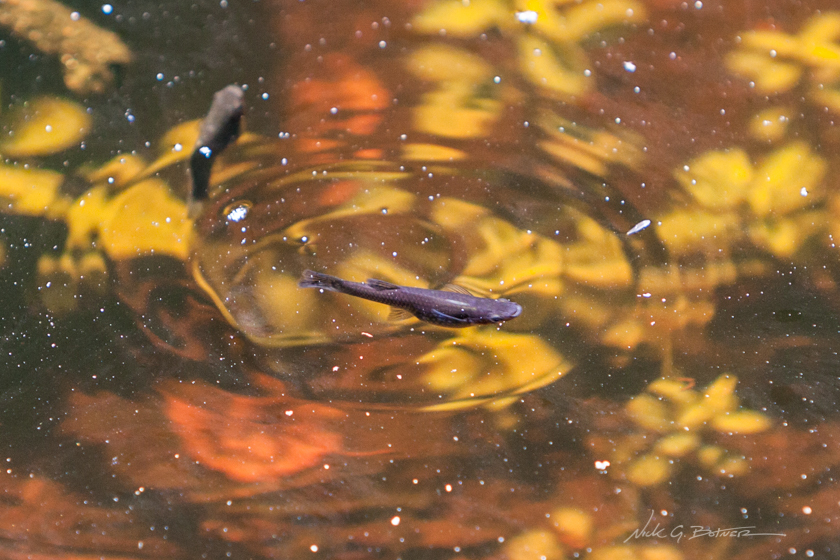 In addition to the spiders, there were plenty of Gambusia or Mosquito fish swimming about. 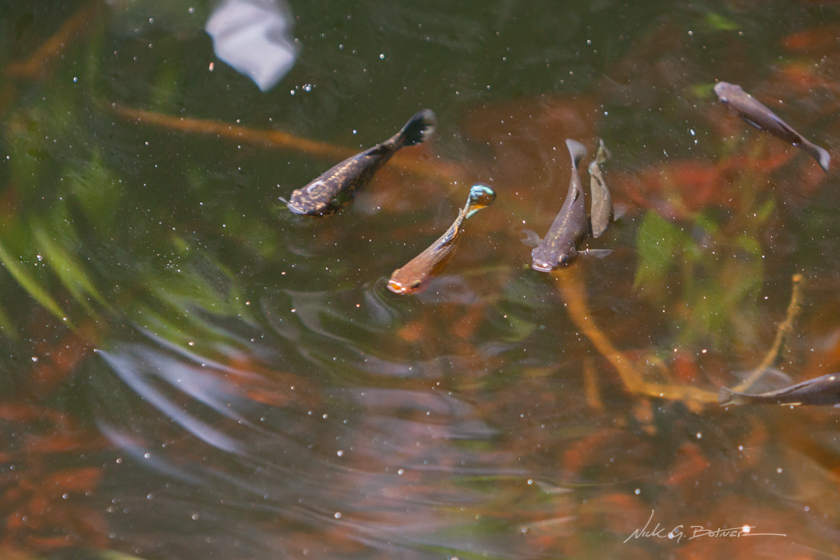 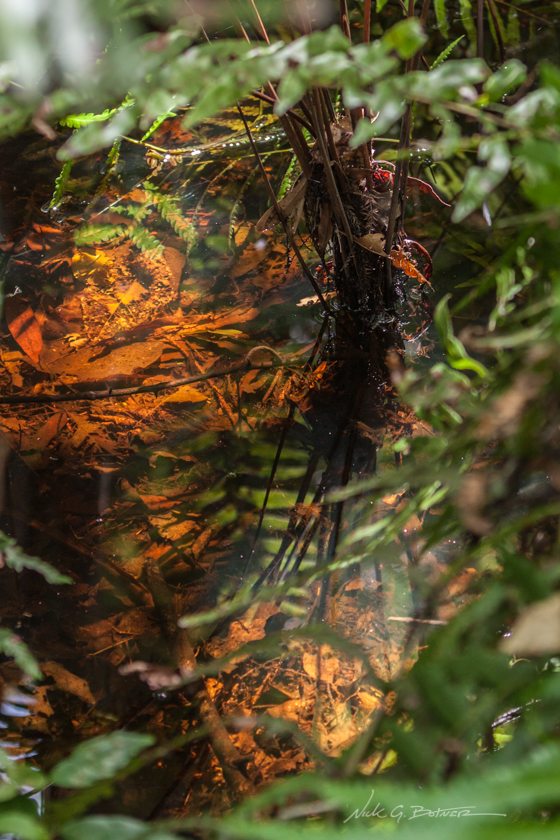 The slow moving water makes for a beautiful red-orange hue created by the rotting plant matter. 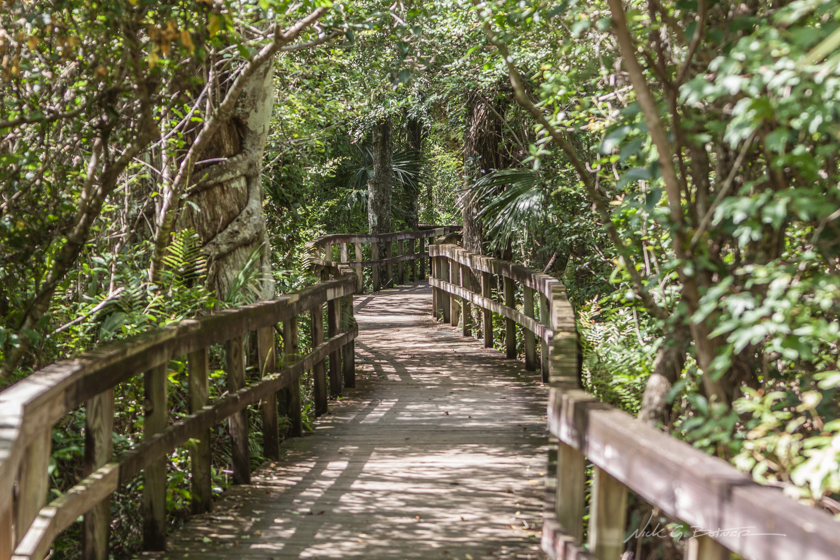 Compared to the Corkscrew Swamp boardwalk this one is much much denser with undergrowth. There are a couple clear areas, but it has a lot more scrub surrounding it. 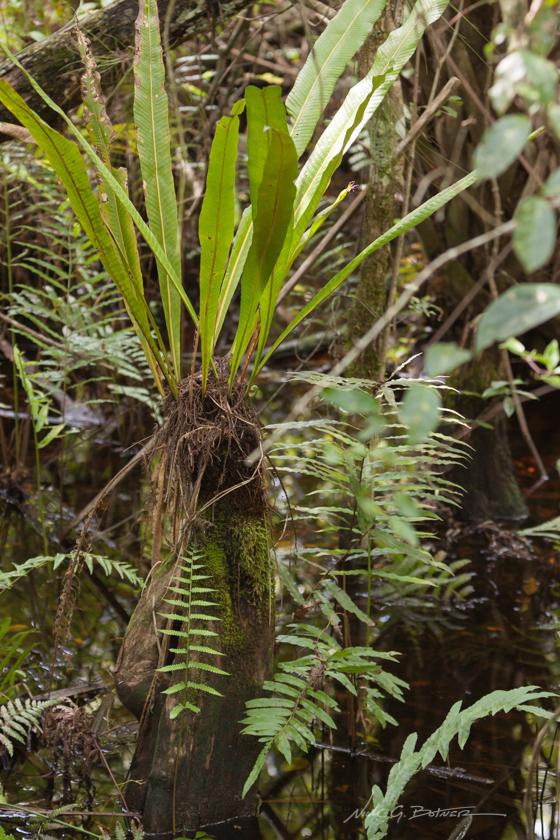 I was hoping this fern on a cypress knee would have turned out better. Just too much going on with all the dense underbrush. 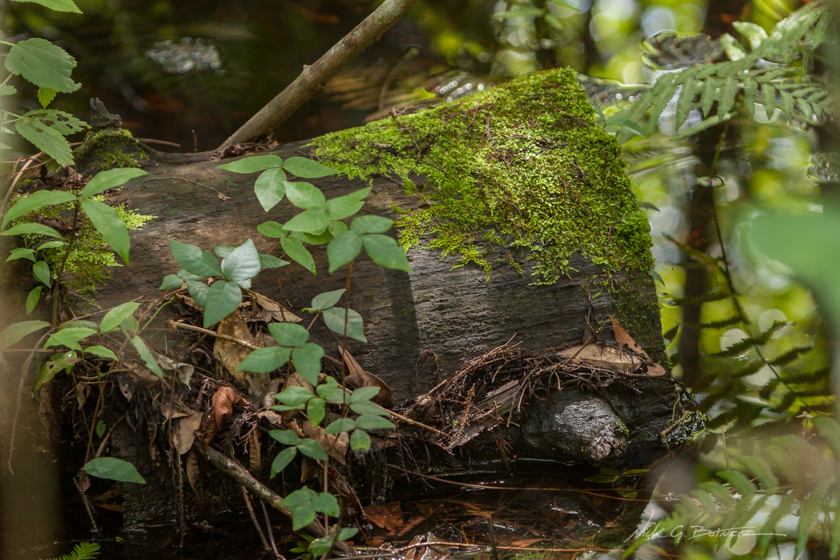 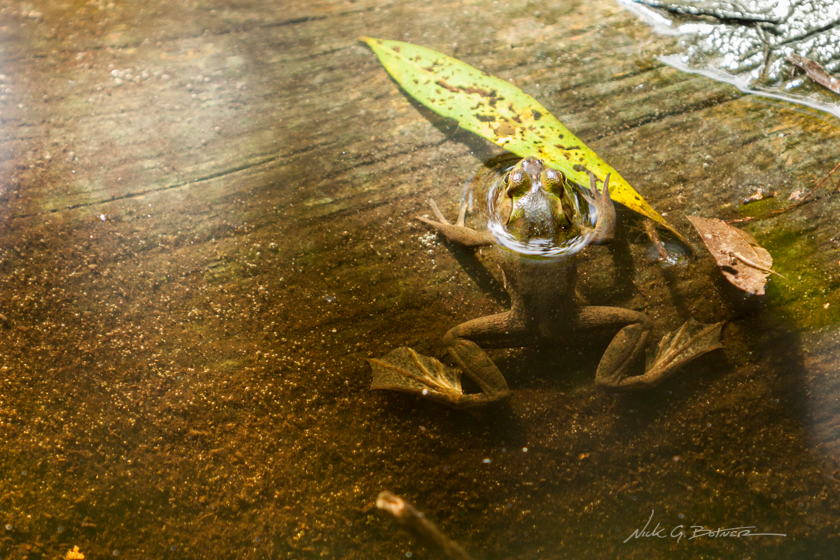 I believe this is a baby bullfrog? 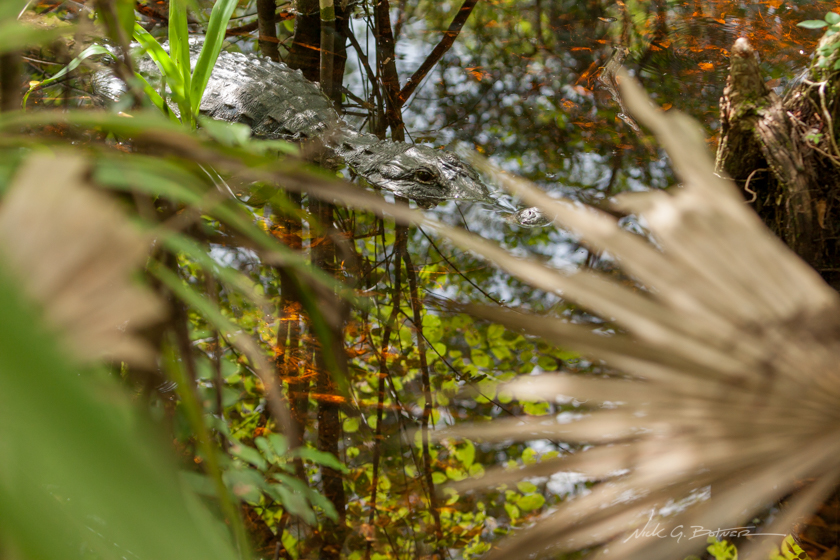 And right at the end of the boardwalk was a little female alligator. 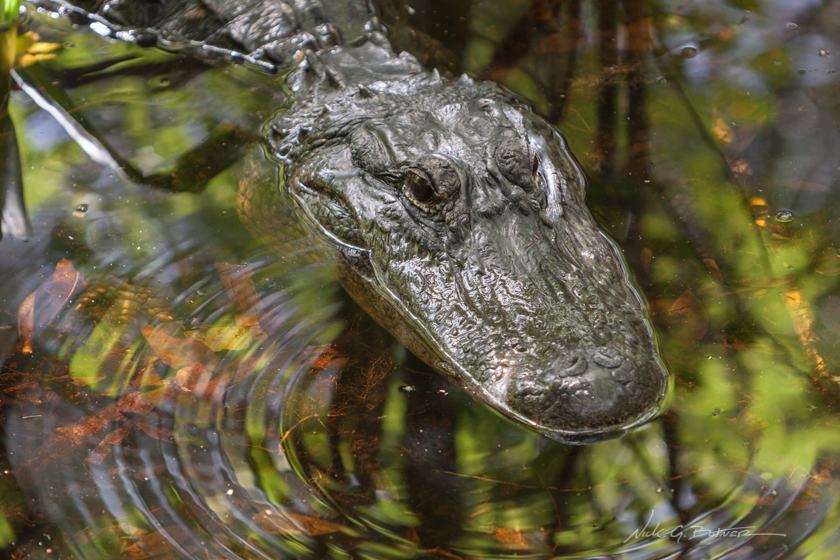 She took notice of me and headed my way. 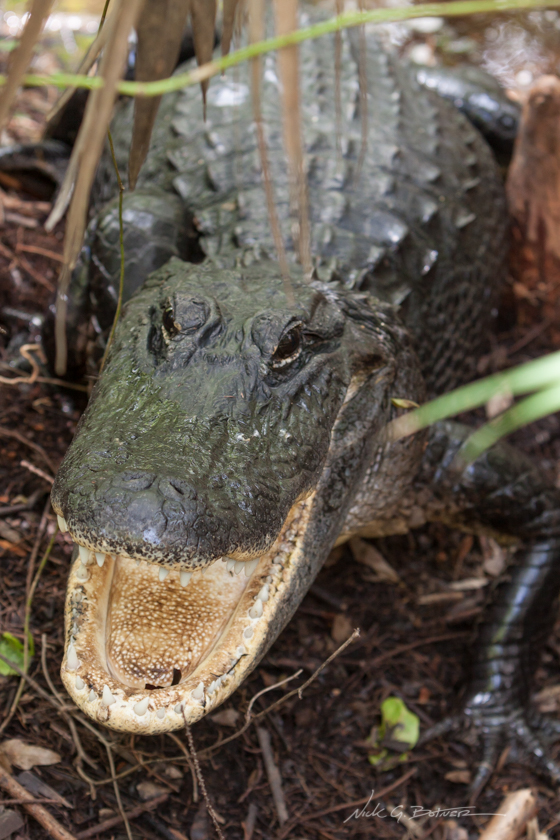 She did not like me being there and came up onto her mound to protect it. 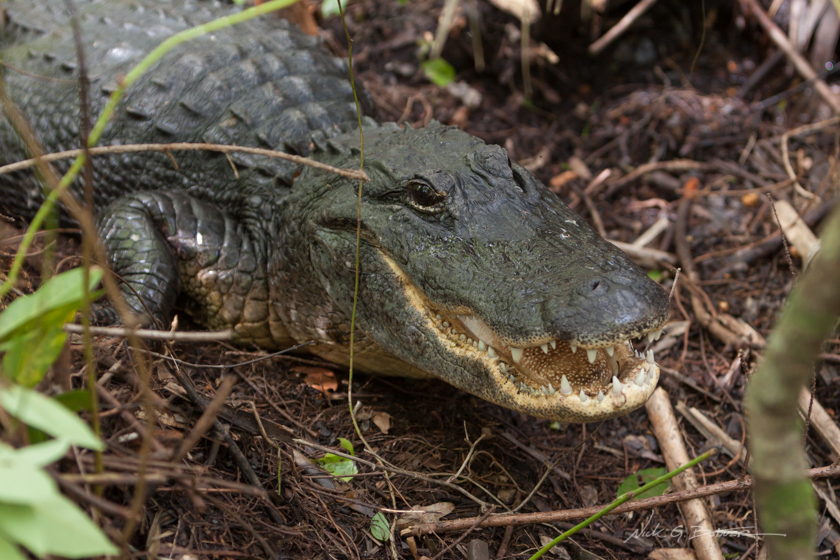 The alligator nesting season begins in Spring. So I am assuming she is protecting here nesting mound. 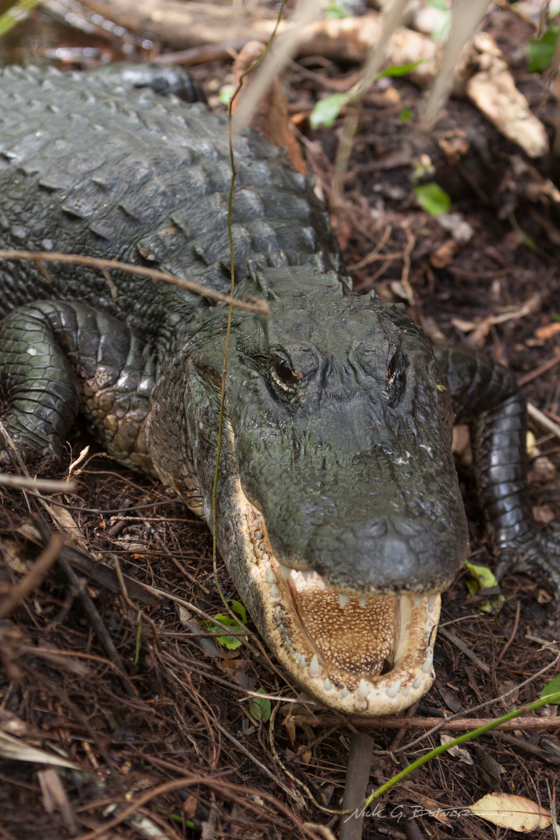 I didn’t want to disturb her any more so I left her alone and headed back down the boardwalk.

To be honest, I was getting absolutely torn apart from bugs by now. My face had been bitten so many times areas were starting to swell up. And I normally don’t have much a reaction to mosquitoes to begin with. So I decided it was time to make a fast retreat.

Once off the boardwalk things tame down tremendously. However, I was still in a cloud of skeetos and decided to have a little sprint away.

Almost back to the car, I saw a trio of young Europeans. The two girls were wearing skirts and skimpy summer tops. I came up to them, I asked if they had bug spray. I told them it’s more than worth the walk, but they were going to need some serious protection. They looked at my face and agreed they would go back to the car to put on more and try to better prepare themselves.

My money was on them making it a couple feet down the boardwalk and turning around. 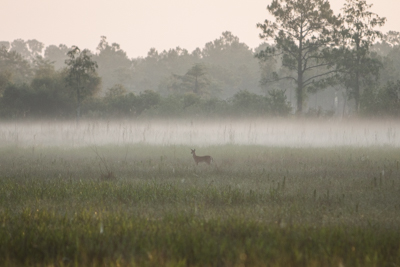