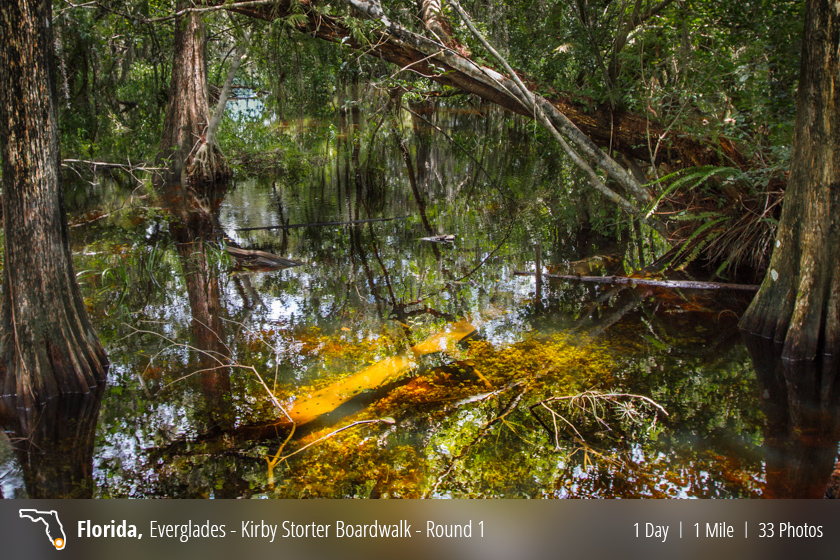 I was headed down to the Keys for the 4th of July and took the beautiful Tamiami Trail over. It had been a few years since I’ve driven all the way across. So needless to say I was a little intrigued when I passed what appeared to be a new (to me) boardwalk called Kirby Shorter.

Of course I was on my way to the Keys for a vacation of drinking rum and boating, so there was no time to stop. However, on my way back to Naples, and without a singe shot (talking cameras here) taken all week. I decided I would stop and check the place out.

Kirby Shorter is located on the South side of US 41 aka Tamiami Trail in the Big Cypress National Preserve. It’s about a half mile to the end, boardwalk’d the entire way. There is no admission cost, and is in all honestly, a rest stop with a gem of a trail.

By the time I made it there, it was mid afternoon. And boy was the sun was bearing down. There were a few German tourists eating a picnic inside of their air conditioned car and a couple tuckers taking a break as well. 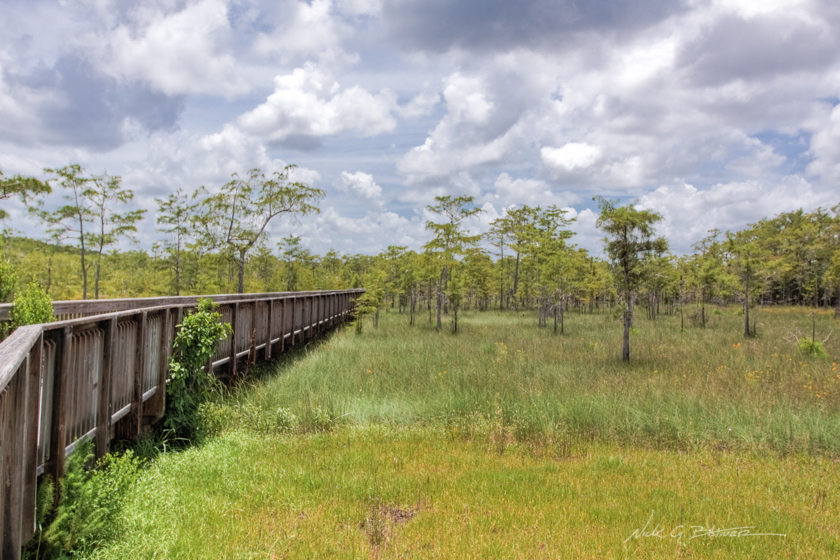 Kirby Shorter is basically a parking lot with a couple picnic tables under chickee huts and this big shiny boardwalk shooting out into the hammock.
While I was taking some surrounding shots a younger photographer also pulled up and was making a b-line down the boardwalk. It was evident that he didn’t have much interest in what was to be seen along the way. I wondered if there was something amazing at the end and I too was just wasting precious time. 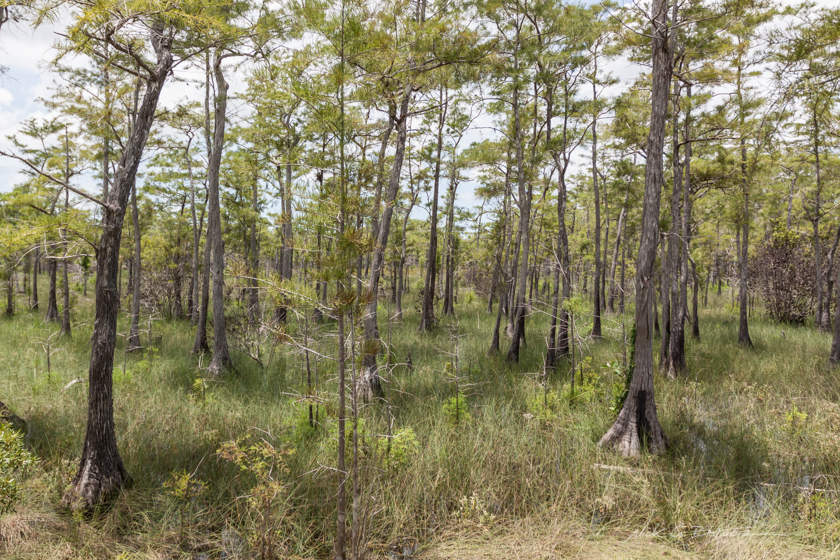 Eh, I let him go run off and do his thing. I was just happy to be outside in the Everglades shooting photography. Besides there was some really beautiful contrasting lights to be seen. 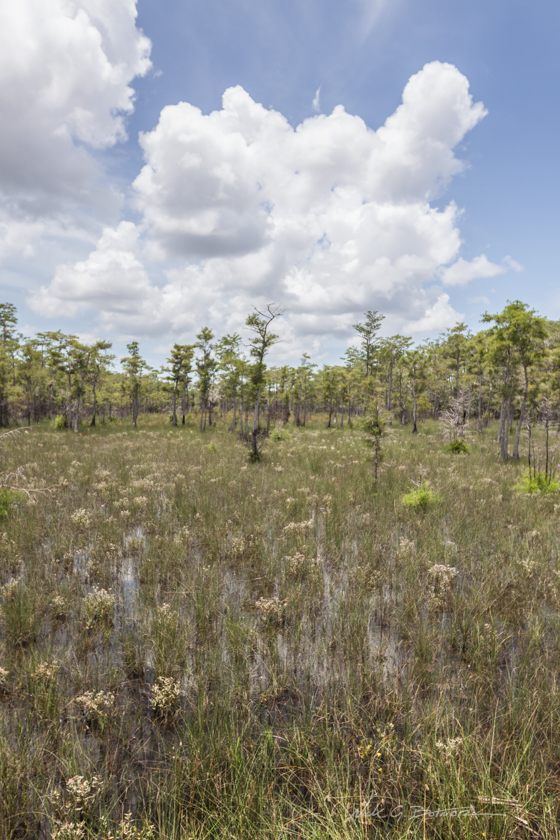 At this time of year, it is obviously the wet season and the water levels are high. Stepping off the raised trail put you right into submerged swamp. It’s not that deep here, but it would make for some awfully difficult walking. 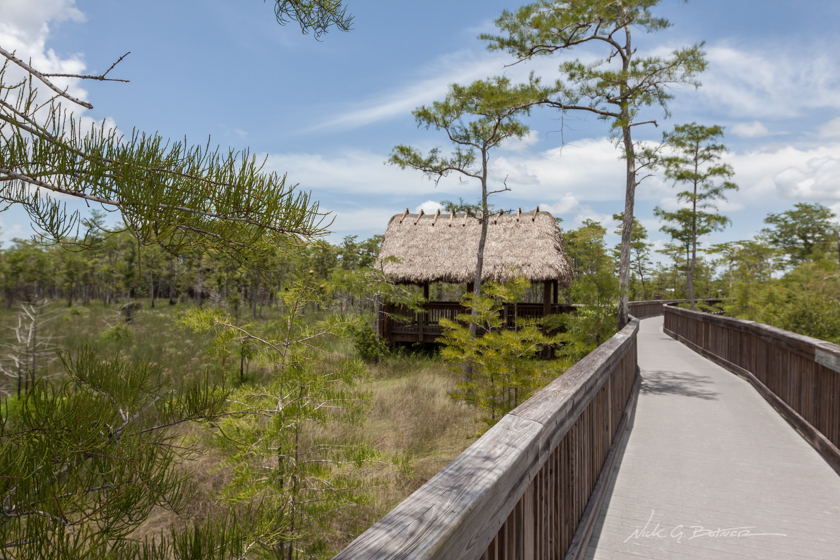 Oh, that’s the chickee hut I took that last shot from. It’s a nice cool spot with benches to sit and relax and take in the surround hammocks. 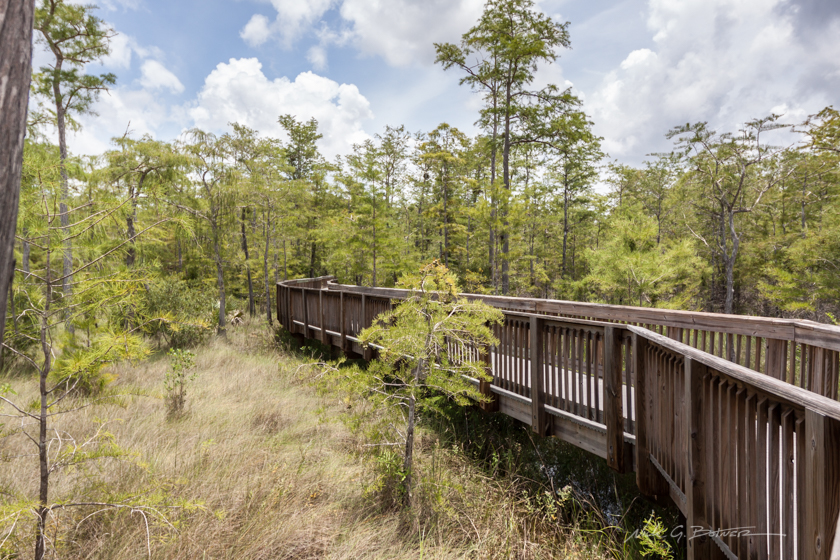 After the brief opening where the chikee hut was, the boardwalk starts to zig a little and snakes back into the hammock. 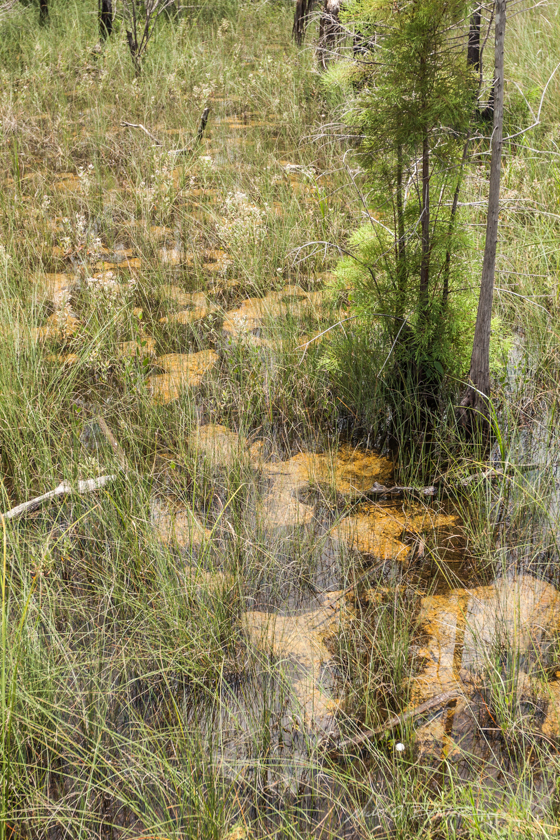 The water is getting a little deeper now and you can see submerged limestone formations just below the waters surface. 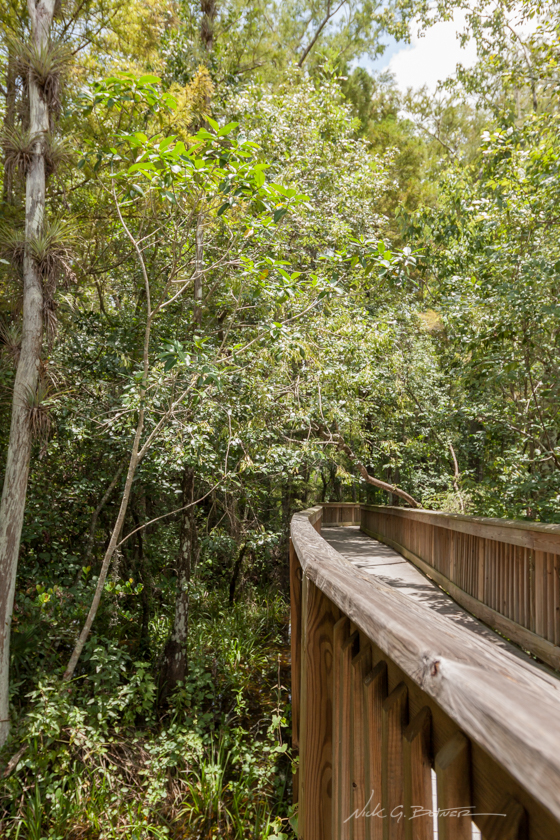 Finally, the boardwalk starts to cut directly into the strand. And by this point, the mosquitoes haven’t even started to bother me. Which is surprising because I didn’t have a drop of repellent on me.

Here is a little panoramic I shot from inside the strand. The water is now much deeper and the undergrowth is all but gone. 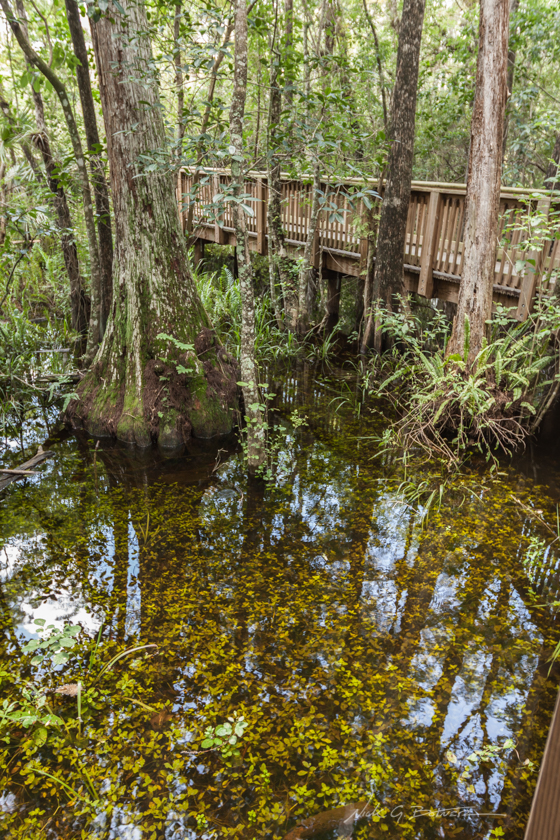 The water was amazing clear and by this point I was now doing my fair share to reduce the mosquito population.

I did see that one other photographer on his hurried way out. He seemed to be quite afflicted by the mosquitoes as he viciously smacked about his face and neck. I figured the nice thing to do would be to say hi and ask him how it was. He made no attempts to stop and said it was “good”.

The mosquitoes weren’t too bothersome. But they were very smart. They would bite you where you couldn’t see them. Every few minutes I would turn my arms over to look at my elbows and see about four of the buggers sucking away on the backs of my arms. Figuring I couldn’t see them, they were too content to fly, so I happily killed them with calm crushing swipes of the hand. 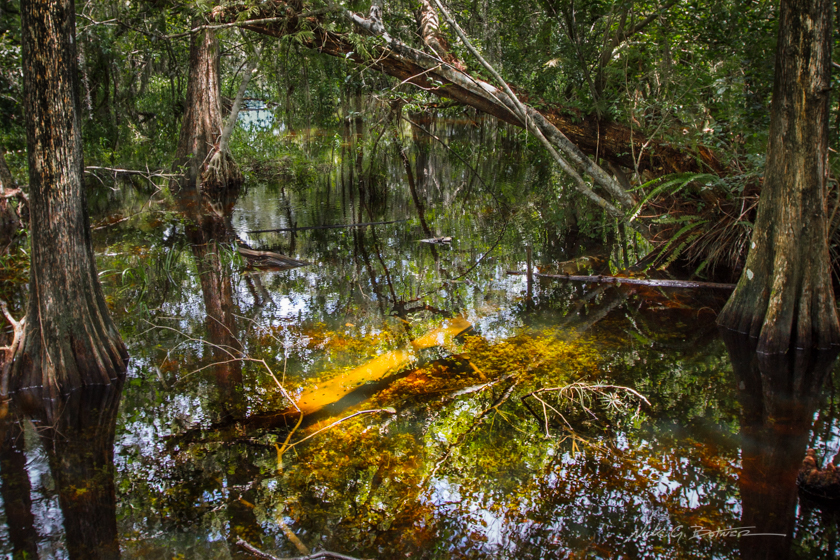 A fallen cypress tree rests at the bottom. The canopy inside the strand is rather thick. So when pockets of light come breaking through, they do wonders to illuminate the orange stained waters.

Of course with it being so dark, any other areas of light can get blown rather easily. I had to do a little bit of post production on this shot to cover them up. Here is where a tripod would have been a big help. 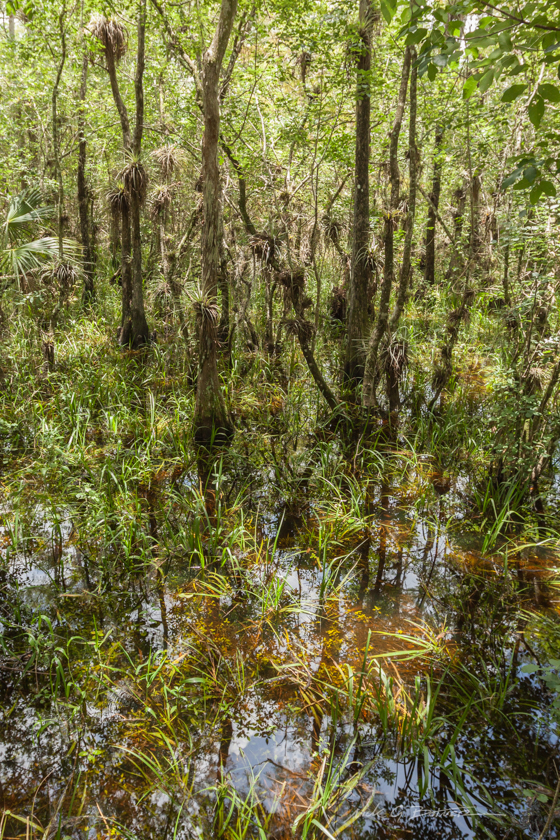 Coming through the strand, things are starting to get brighter again. Grass is breaking through the water’s edge and tiny airplants are growing mid-shaft on trees. 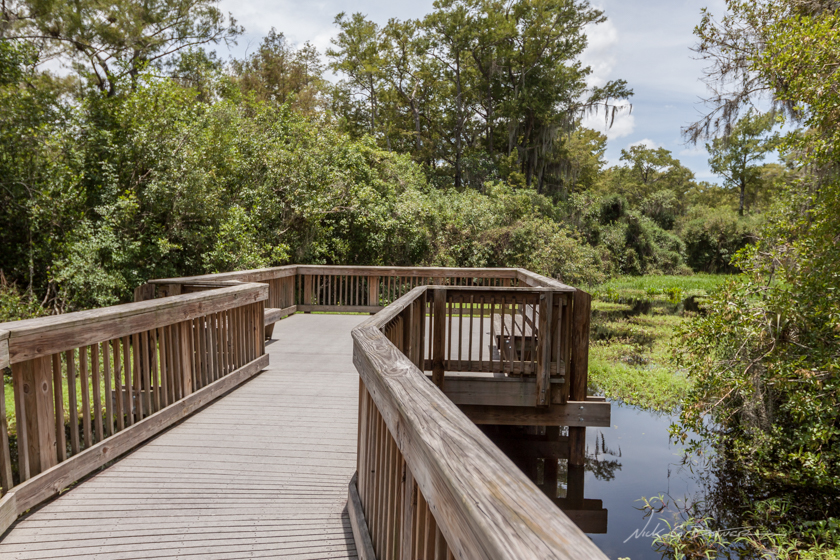 And here is the glorious end of the Kirby Shorter boardwalk. It breaks out into a slow moving shallow river. With an observation area that gives you view up and down the cut between strands. 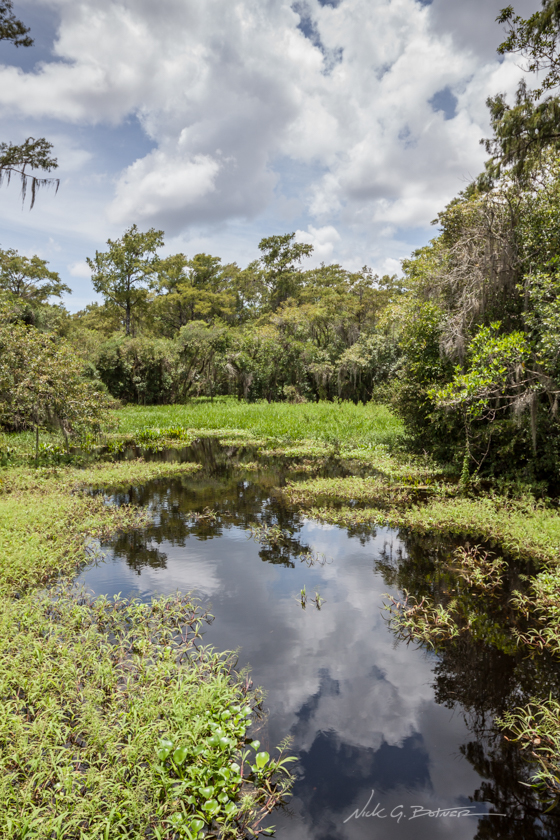 Looking South, you can see a little ways before the view is again cut off by the strand. 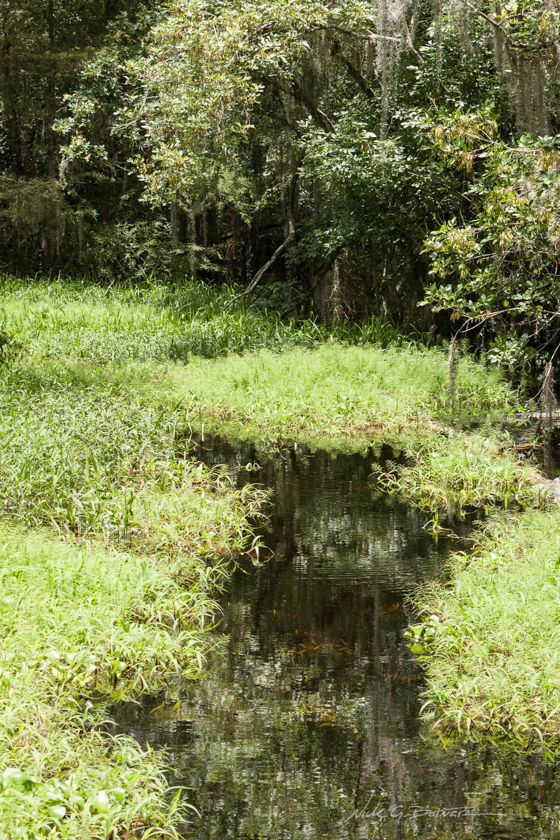 The view facing North, doesn’t lend it’s self to much.

And I was a little surprised to see that there were absolutely no alligators or turtles to be found. I still wondered what/why that kid was making such a hurried run? Maybe it was an art project he had to get done and hated the mosquitoes? But this is a little too far for someone to make a 15 minute stop and rush through. Oh well. 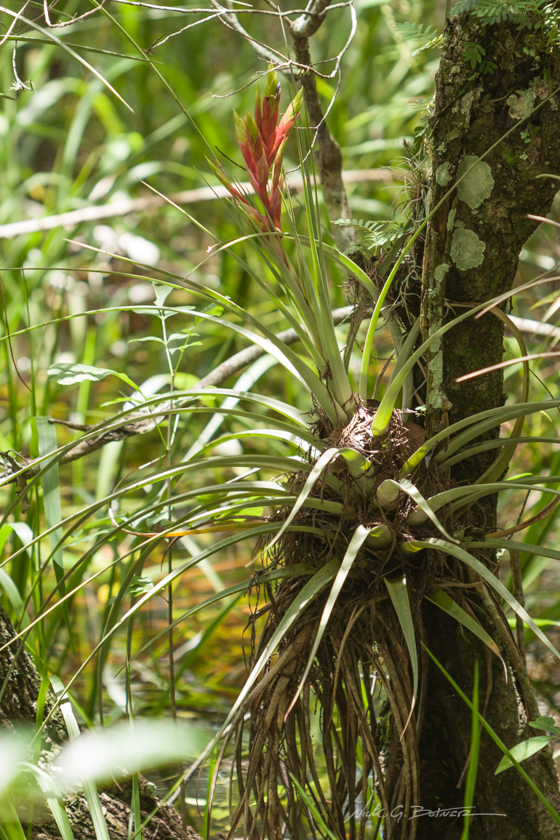 The one thing I do like about boardwalks that do not loop around, you sometimes get to see things on your way back  that you passed over on your way out. Maybe the lighting changed, or that one tree was in the way and you would have never seen it. You never know.

I found this beautiful airplant tucked back into the strand and only saw the red tip peaking between the trees. It was enough for me to investigate and get a much clearer shot. 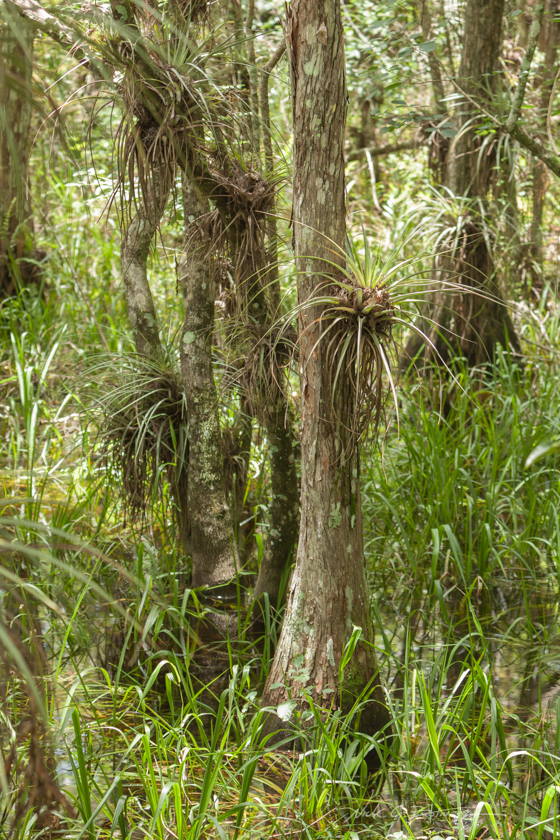 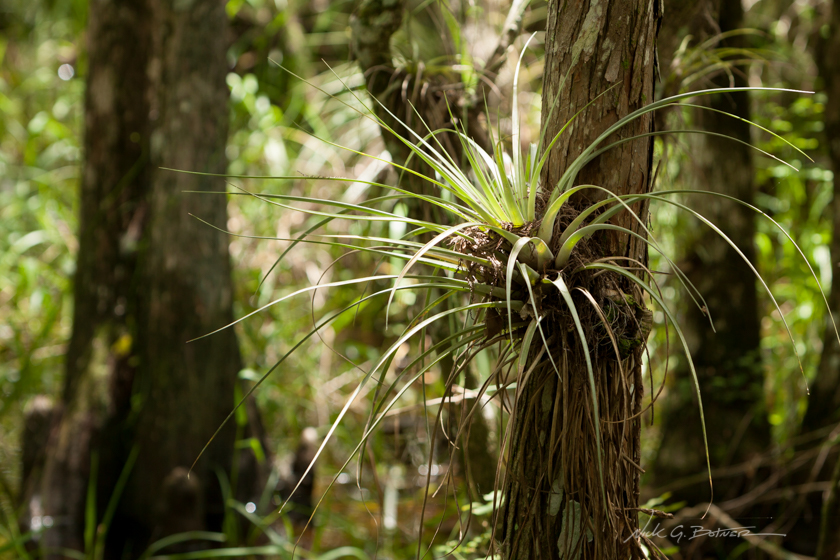 There is something to be said about an airplant in darkness with a spot of light breaking on it. 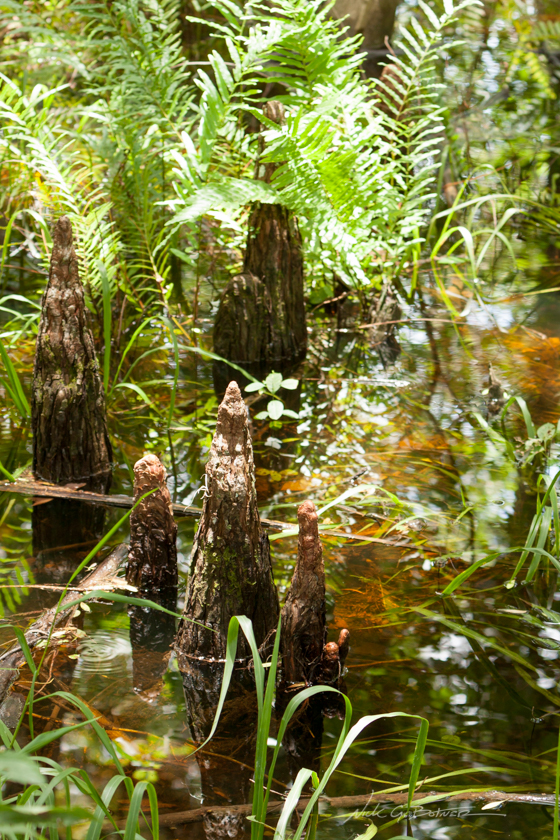 The same goes for cypress knees and ferns! 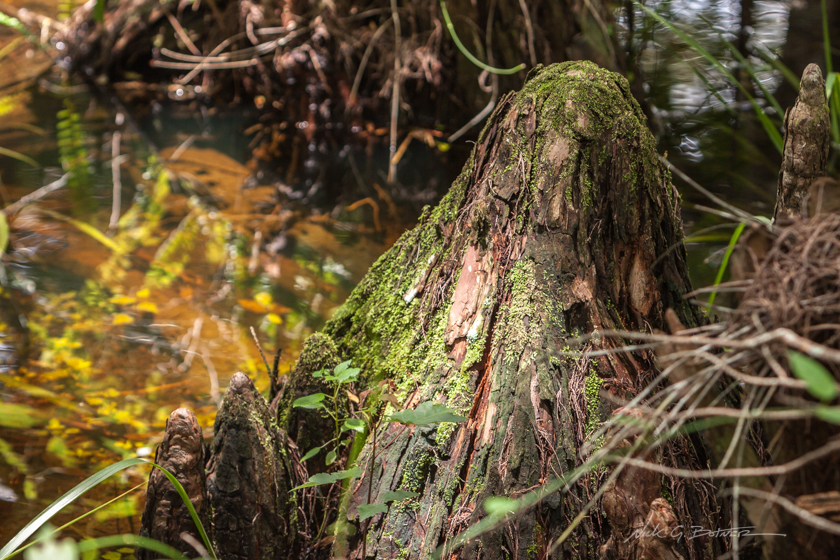 See what I mean. Mmm mossy cypress knee, how I love you. You’re so Fern Gully. 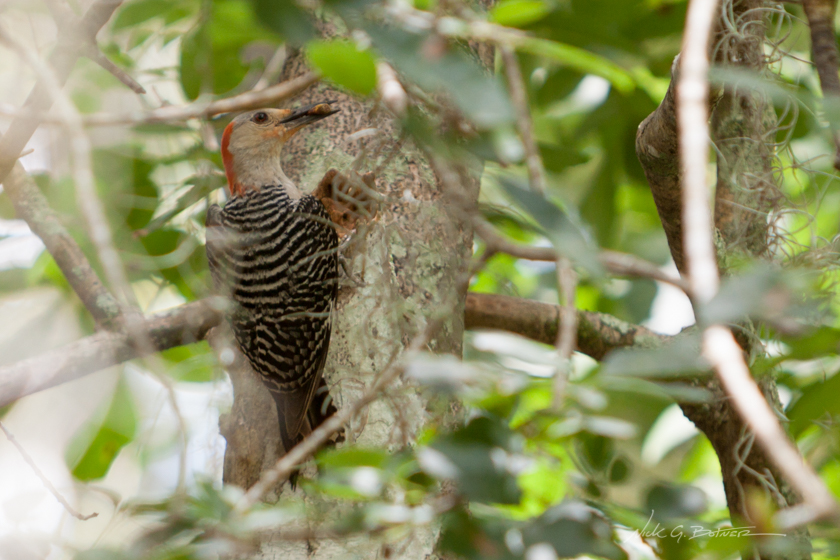 There were a few birds out there. But they were being difficult to shoot. This was the best I could get of an overly hyperactive woodpecker. 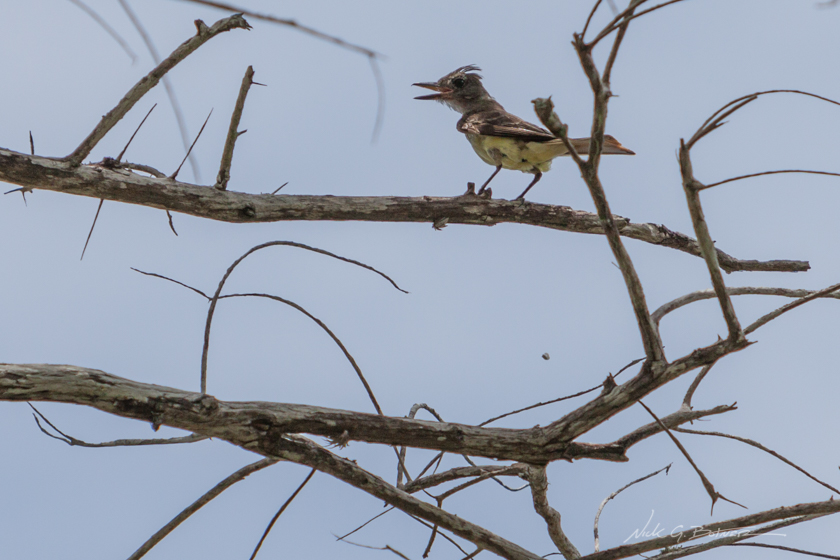 And yes. You will notice a floating article in this shot. Or I should say falling. Lovely. 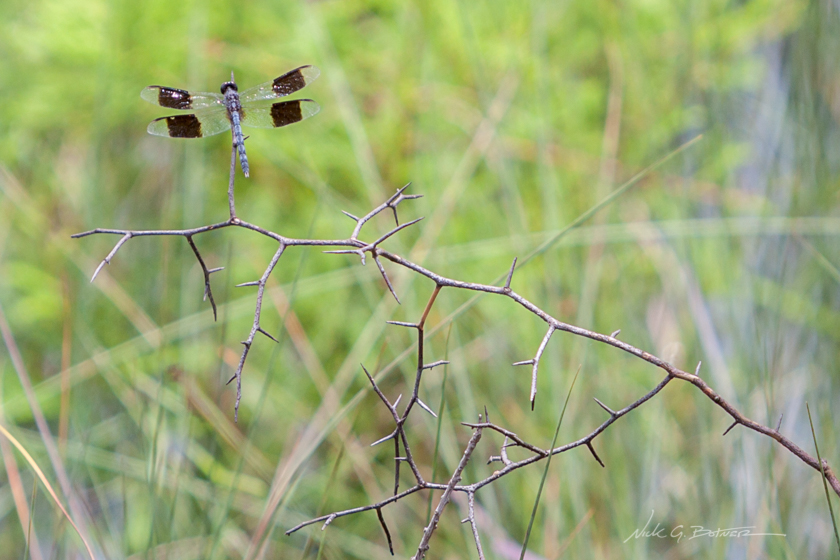 I did fine a sole dragonfly. Probably resting from all the mosquitoes he’s been gorging himself on. 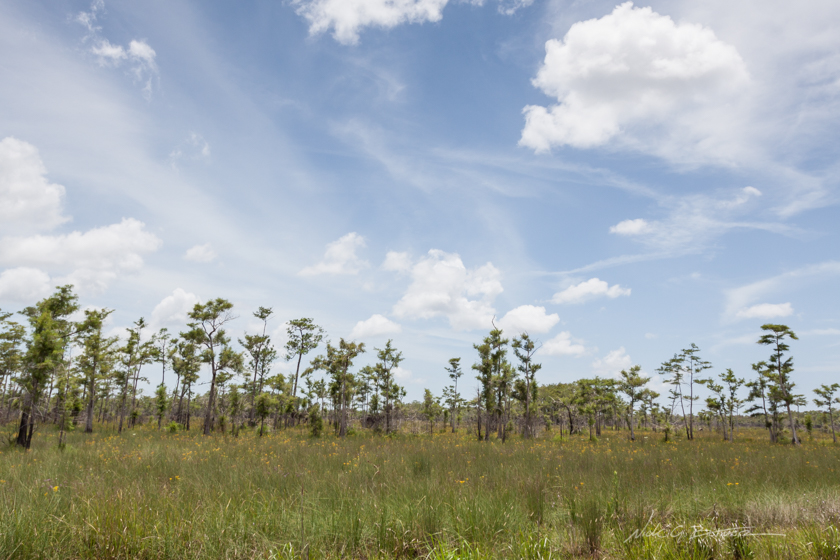 Back off the boardwalk and walking along the parking lot’s edge, I wanted to try to capture a bit of the scenery. 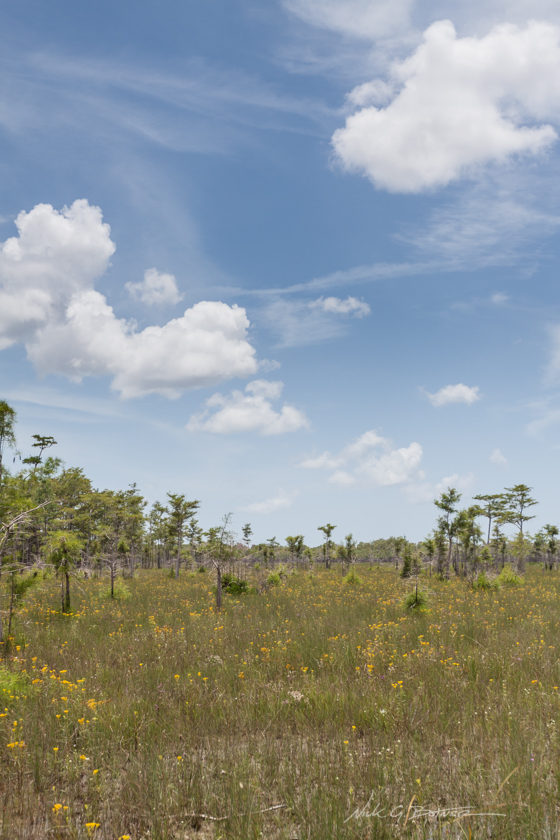 Everything is green and the swamp flowers are all in bloom. 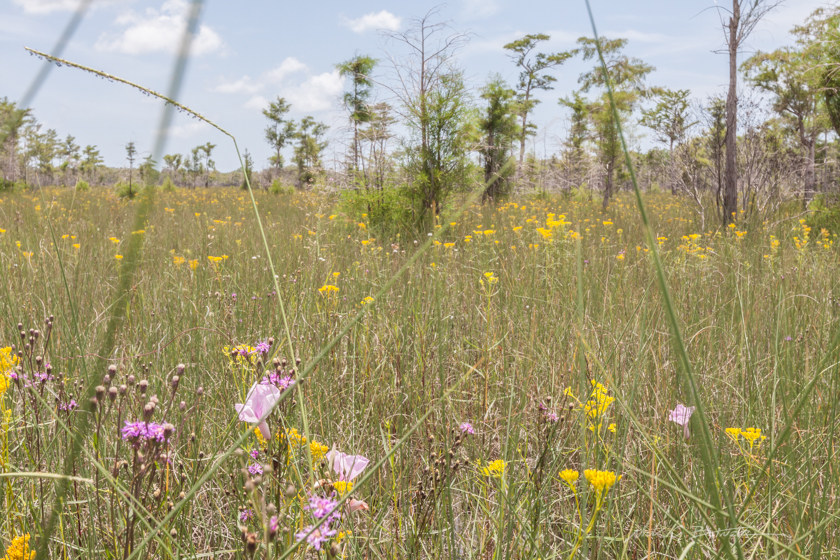 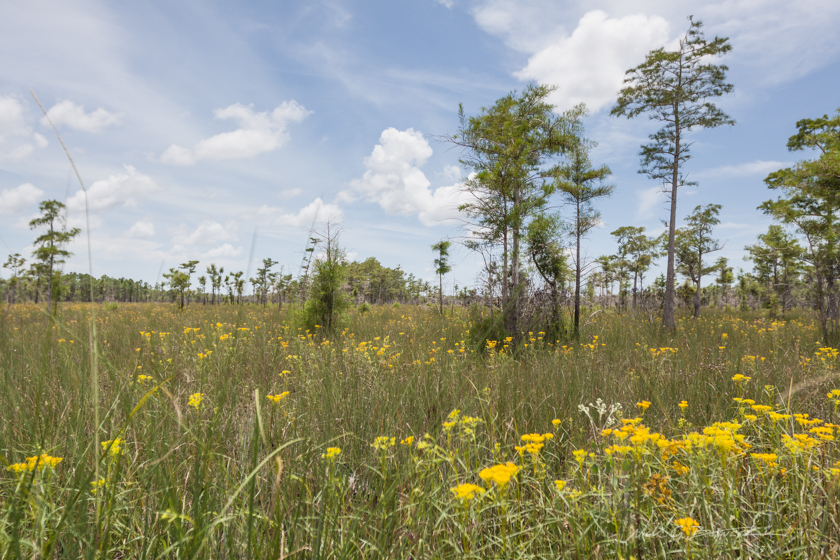 And that’s about it for Kirby Shorter.

It’s a very nice facility, just a little short. However, this is a perfect kind of place to stop on your way to or from Naples/Miami and have lunch or just take a break. The boardwalk isn’t that long and it will take you thorough several ecosystems. Giving you a real quick and intimate experience with the Florida Everglades.

Thanks! I hope you enjoyed. – Nick 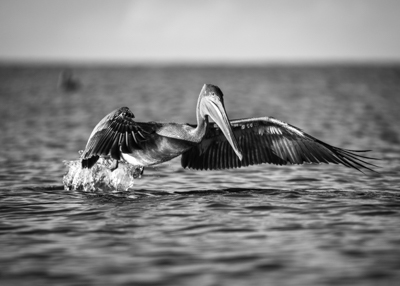