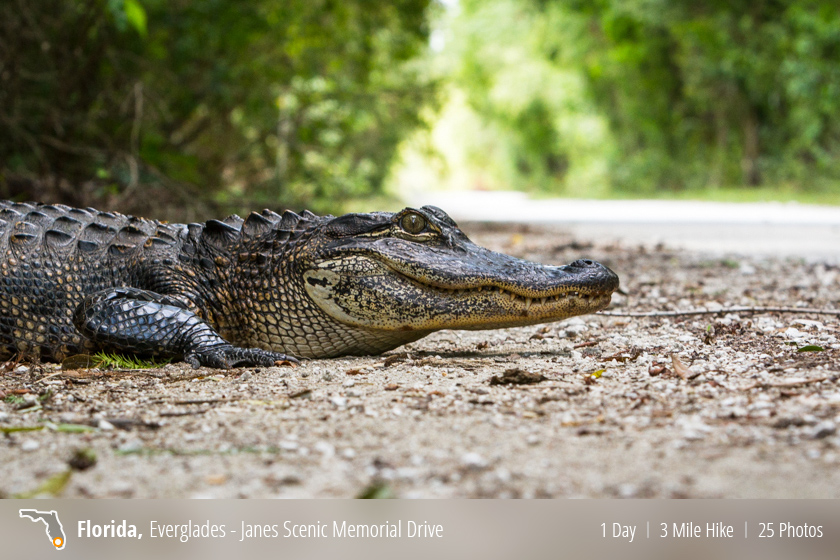 In the heart of the Everglades, off of State Road 29, there is an old dirt road called “Jane’s Memorial Scenic Drive”.  Stretching 11 miles, this road runs through the Fakahatchee Strand State Preserve, and ends at the edge of the the Picayune Strand State Forest, the site of the now infamous “Swampland in Florida” scam. 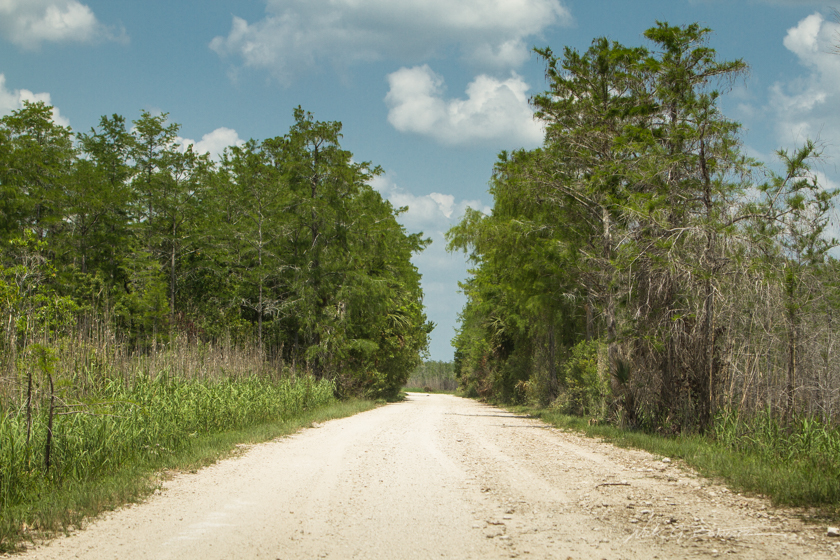 The drive was originally developed back in the 40’s and 50’s as a logging trail in order to access the ample supply of Bald Cypress. While the route is easily traveled by most any vehicle, prepare for a good wash-down afterward. As seen above, it’s a “hard-packed” (dirt/rock) road and will leave your vehicle in a thick coating of limestone and calcium carbonate (seashell) dust. 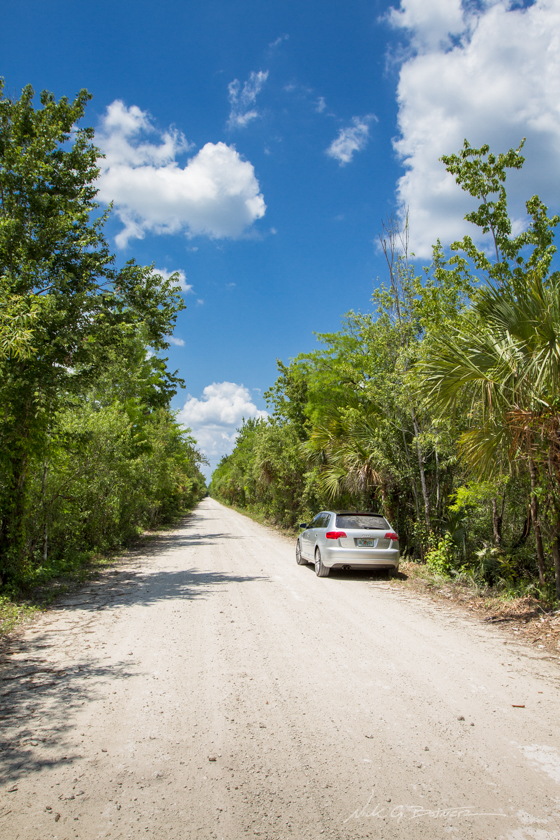 Back in Copeland FL, where the road is more easily accessed, the environment is primarily prairie and marsh. It’s not until a few miles up that the surroundings begin to change and nature starts to close in on you. 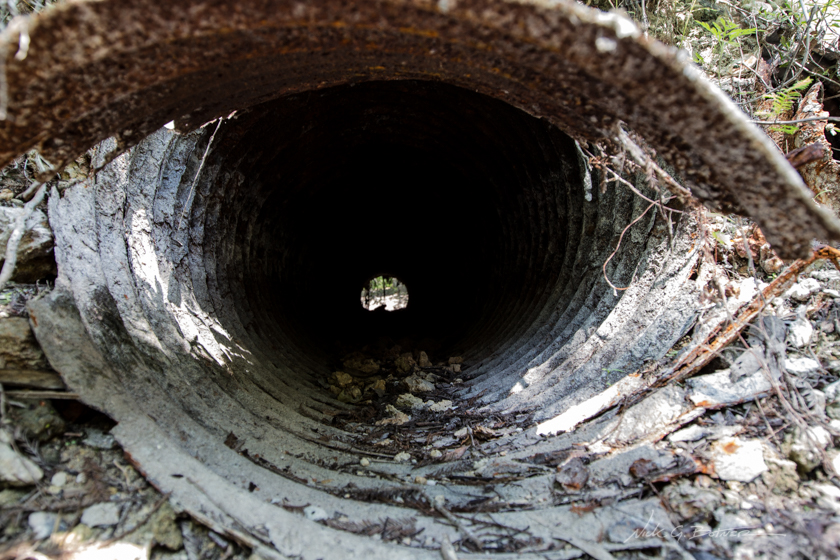 My visit was during the dry season. And as such, I spent a lot of time exploring places that would normally be waist deep in water. I was really looking for some kind of photographic treasure exposed by the extremely low water levels. 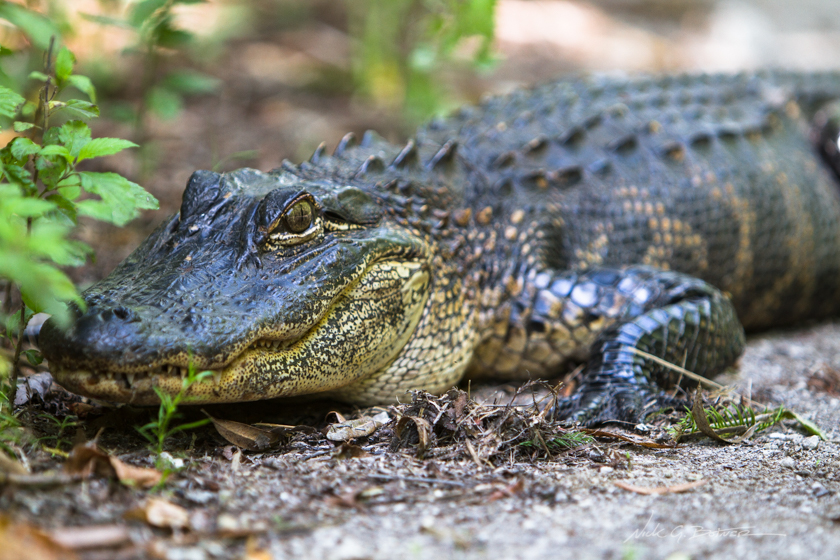 Almost halfway down the drive and I hadn’t seen much in terms of wildlife. I was getting back in my car when I happened to look down the road and saw this little guy pop out from the bushes and start walking down the road. 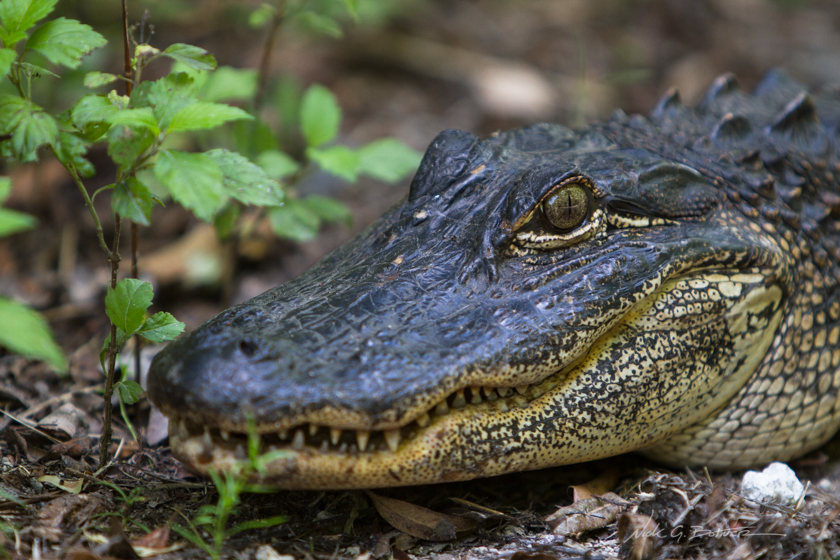 Surprisingly, I was able to get in close contact, just as long as I didn’t try to go behind it’s line of sight. 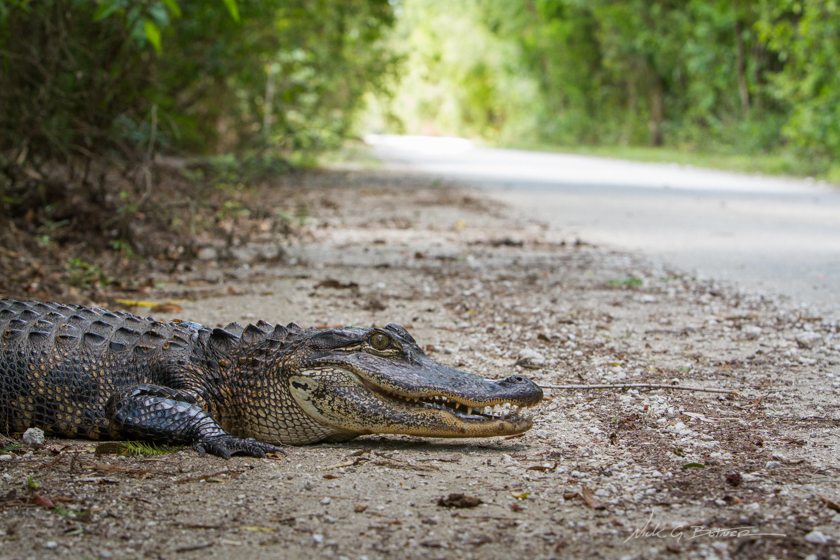 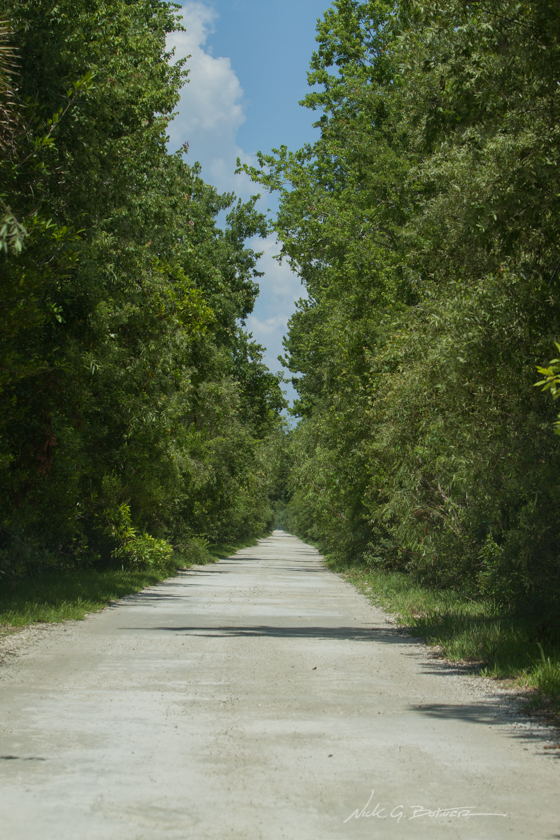 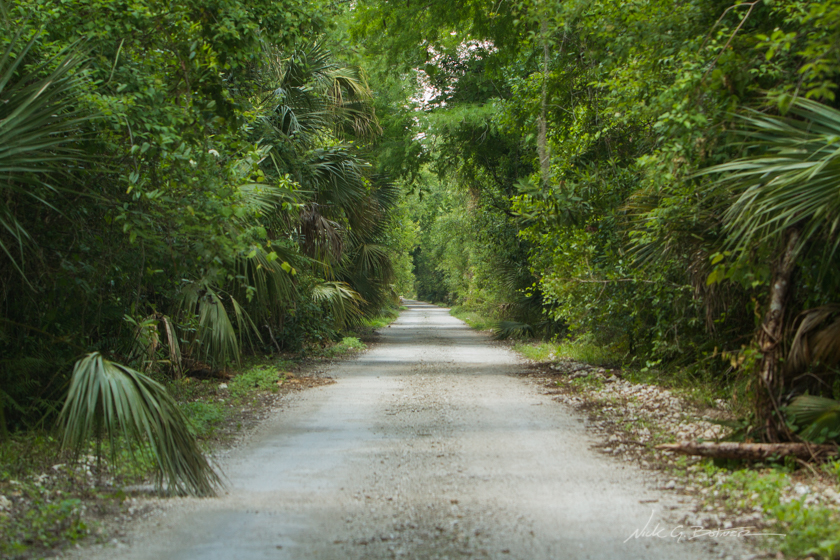 With the weather being as nice as it was, I opted to roll the windows down so I could smell the surroundings and listen to the birds sing. Unfortunately, this also meant that Horse flies, size of small hummingbirds, would take it upon themselves to dive bomb into my car and become entrapped in the space between the window and dashboard. As much as I wanted them to find their own way out, have several of them in the car with you does become a bit distracting. 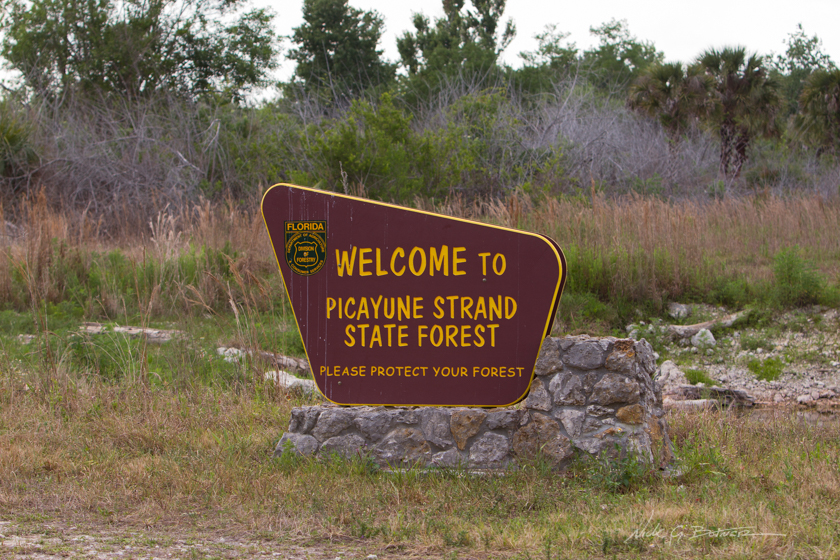 Making it all the way up to the Picayune Strand entrance, I figured I would get out and have a look around. 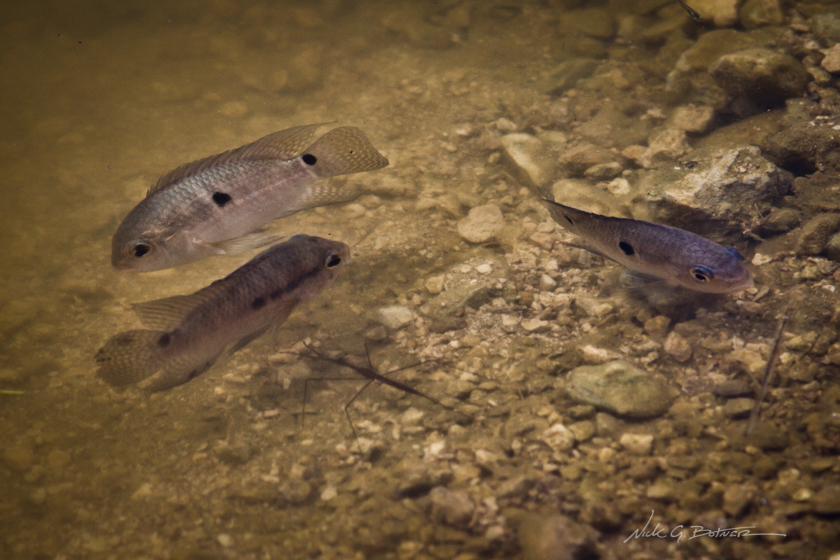 Separating the Fakahatchee from the Picayune is one of the many man-made canals from the old Swampland for sale project. 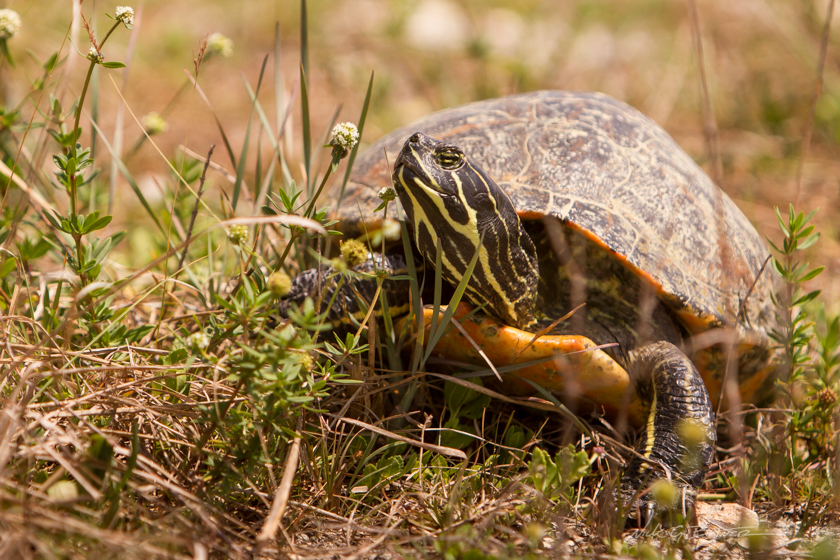 I caught some shots of this cooter turtle making the trek over the road to the adjacent canal. Here you can see him looking at me trying to tell me to get the heck out of the way. 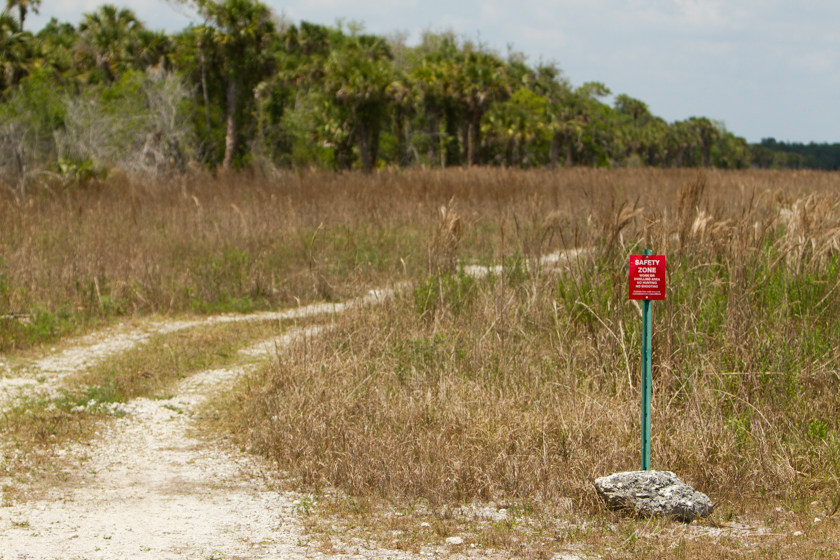 About that whole “scam” thing. In the 60’s a developer purchased 57,000 acres in an attempt to make the largest subdivision in America. People were flown in from all over the world and hard pressed to buy 2.5 acre lots. Unfortunately most of the land would become sub-aqueous in the wet season and the project ended up going bankrupt. Thus earning the notoriety of the infamous “Swampland in Florida” scam.

In 1985, a move was made to purchase the southern Estates with Conservation and Recreation Lands (CARL) funds under the “Save Our Everglades” program. This meant acquiring property from roughly 17,000 landowners. While most has been purchased, with the help of the federal government, there remains a select few, still holding out to this day. It’s not particularly a good idea to go out exploring the area unless you have a gps, or local knowledge on how to make it through all the unmarked roads. Either or, I’ve herd some interesting stories from this area, enough to make me pass it up . 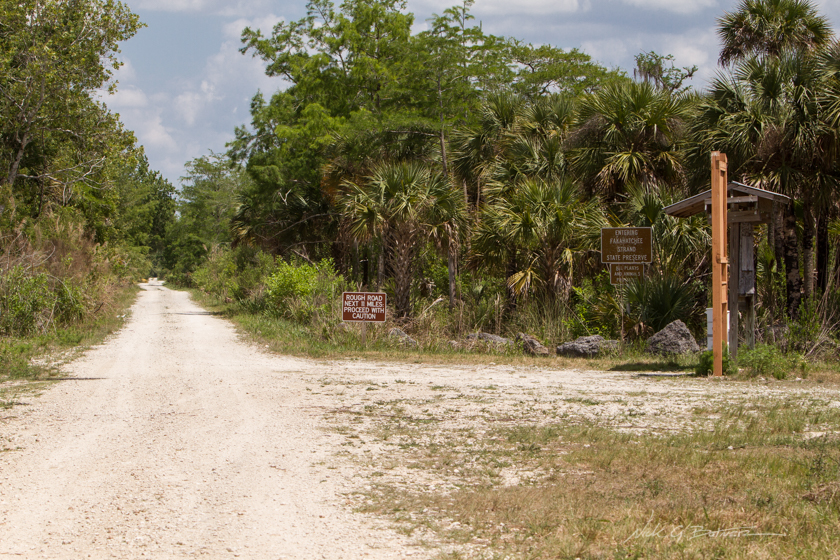 Not quite done with my “Nature Time” I turned around and started my trek back down Jane’s Scenic Drive. 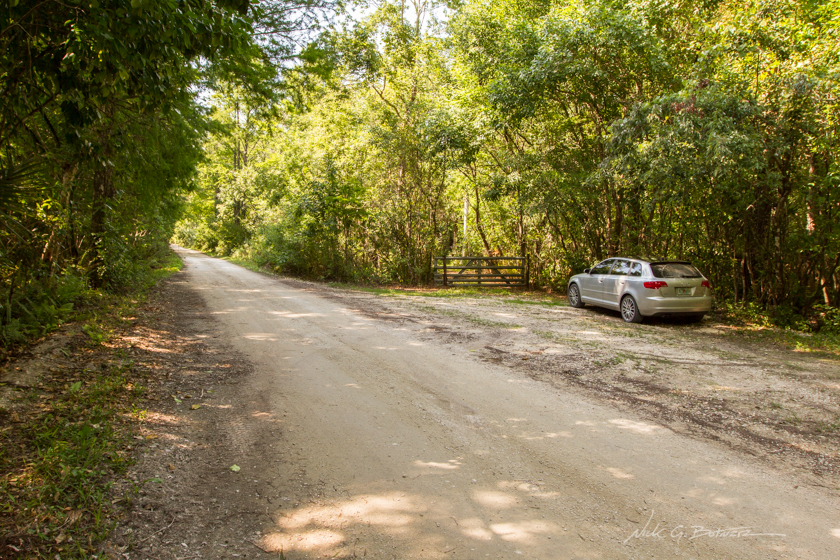 Let it be known, if riding in a car and looking out the window the whole time isn’t your thing, don’t worry. There are old logging trails called “Trams” that will take you deep into the forest. There are quite a few of them, and some are more popular than others. I picked one that looked like it would have a nice mix of hardwood and swamp and headed out to explore it. 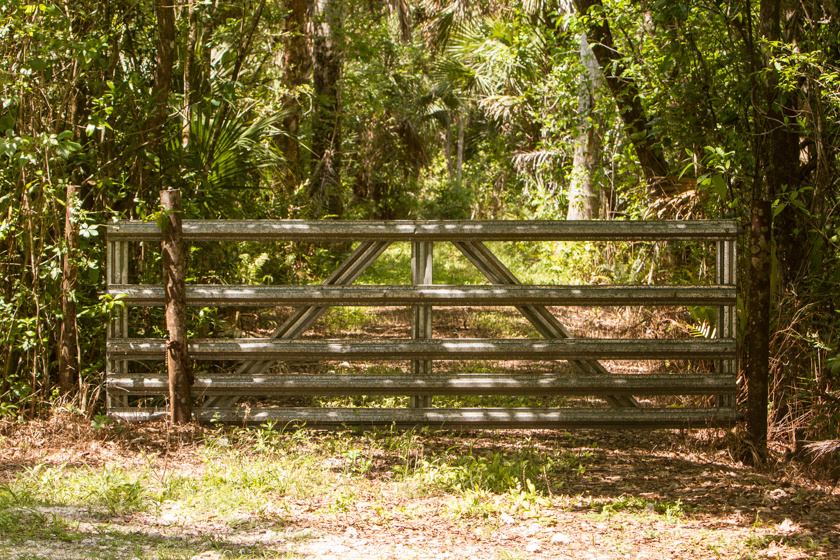 Finding the trams isn’t hard. They are easily marked by a metal access gate of which you can just walk around. How well the gate is kept up is a good indicator as to how accessible the tram will be. 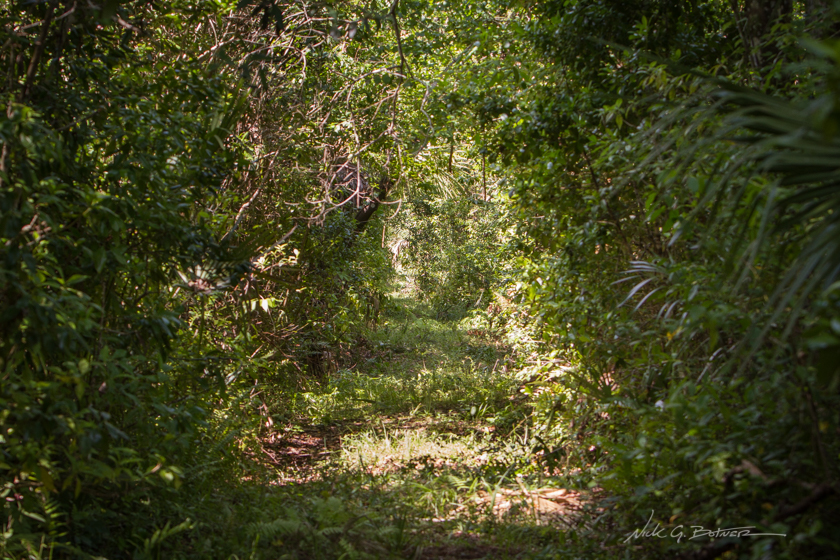 On average, the trams are still wide enough for an ATV to make it through. 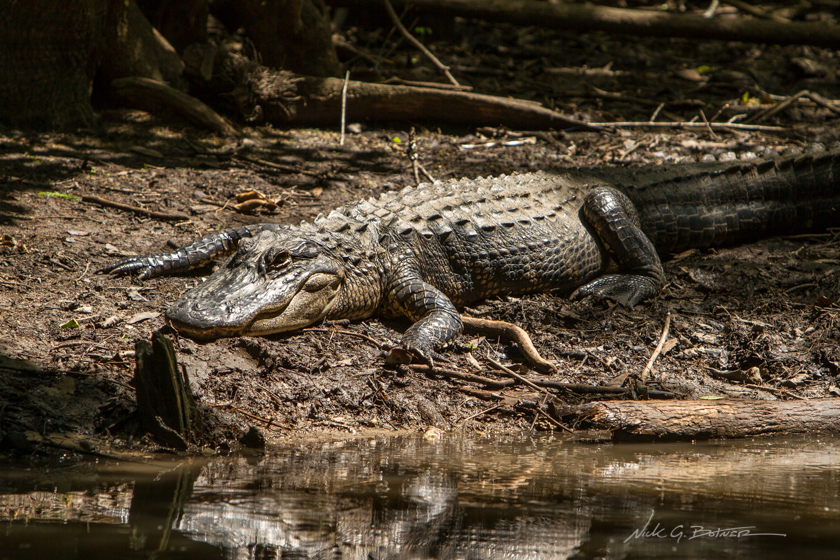 Off to the side of the trams are the drainage canals. These were created when construction needed fill to build the tram and also to help keep water off in the wet season. Since my trip was in the dry season, alligators, like this one, are reduced to sunning themselves next to whats left of the water. In this instance, the only body of water for a few miles was a 15 foot puddle of mud water.

I took this opportunity to get off the tram and into the dried mud for some better photos. I’d say I was able to get almost to the waters edge (across from the gator) before it decided to leap into the water directly at me. It was quite startling, but that gator wasn’t going to take any chances with me and wanted what little protection it had. I think I was already back up to the tram before he made it completely into the water. 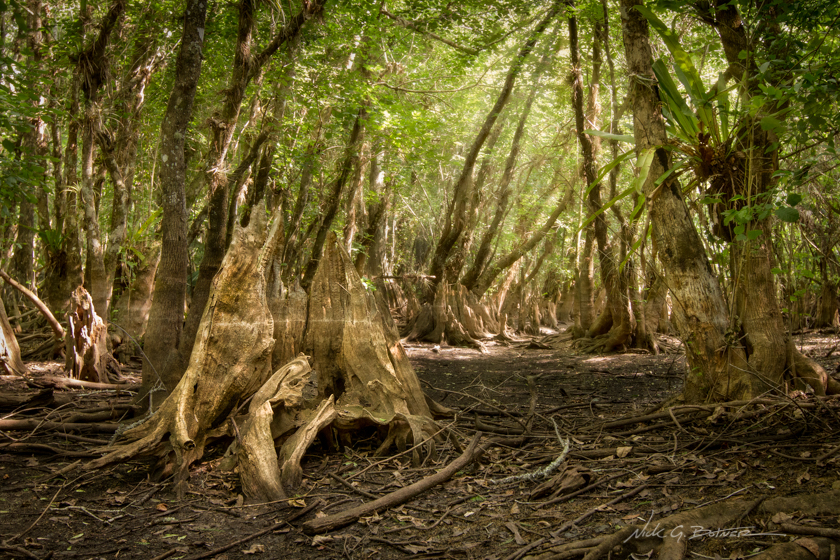 Off the beaten path, you can see just how low the water level really is.

Here’s looking back at where the gator is now hiding. 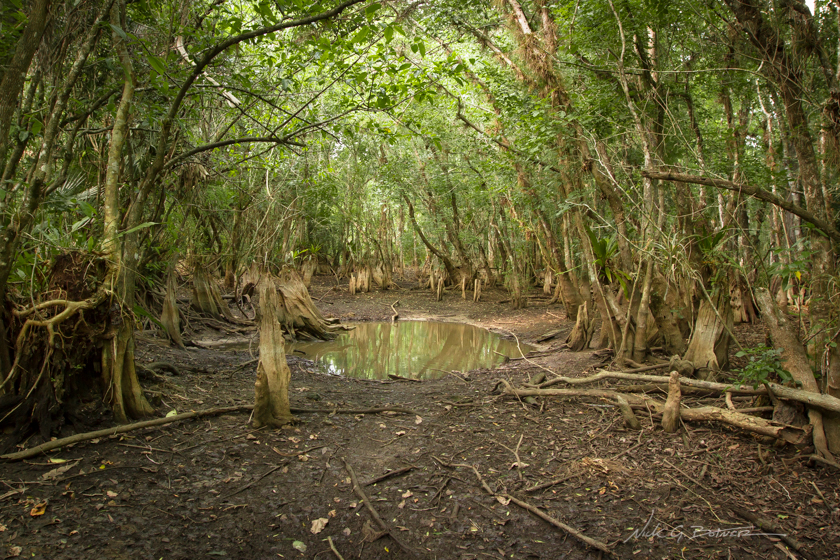 Around from the other side as well. 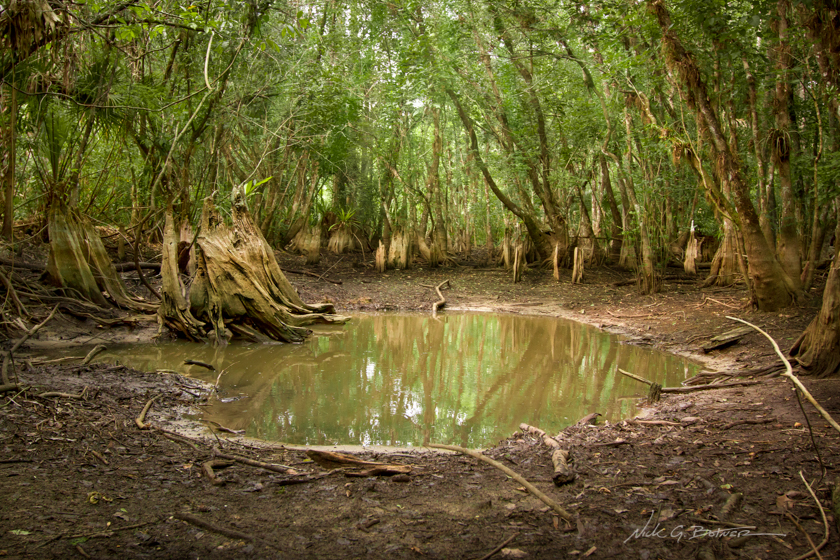 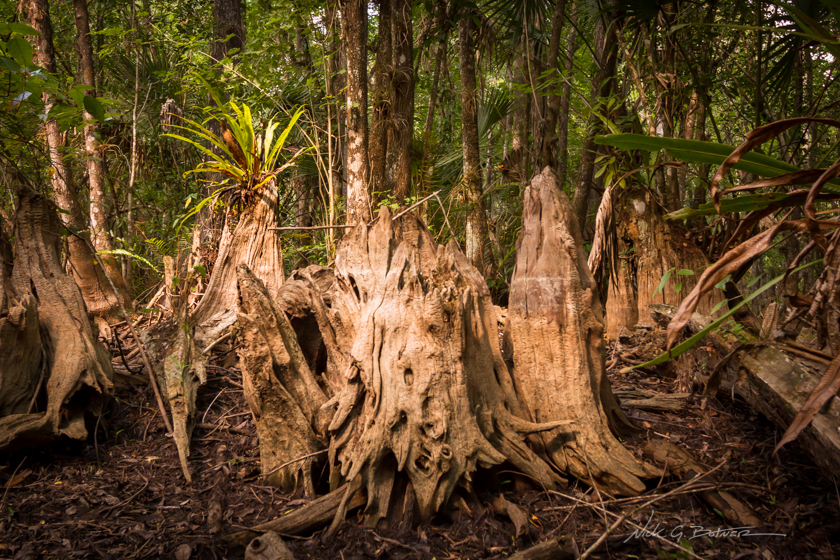 The sunlight peaking through the canopy, onto the bald cypress stumps, made from some interesting photos. 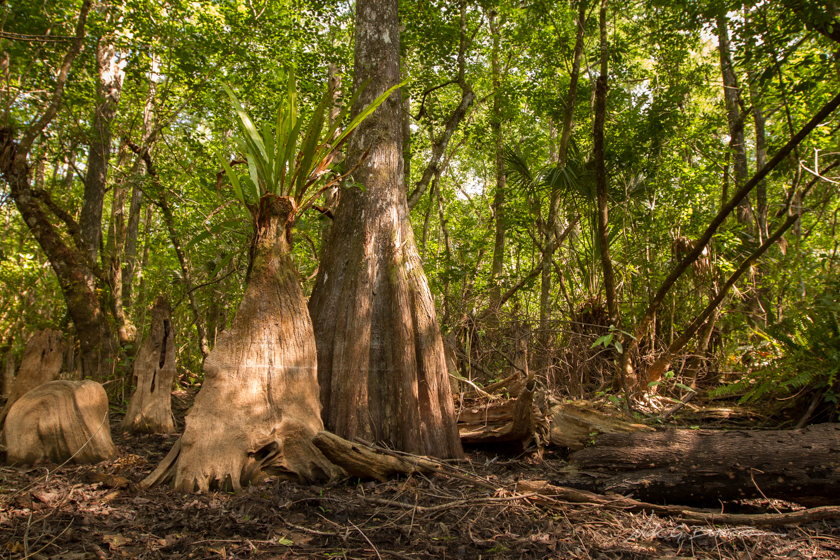 Golden leather ferns can be found sprouting on top of cypress knees. 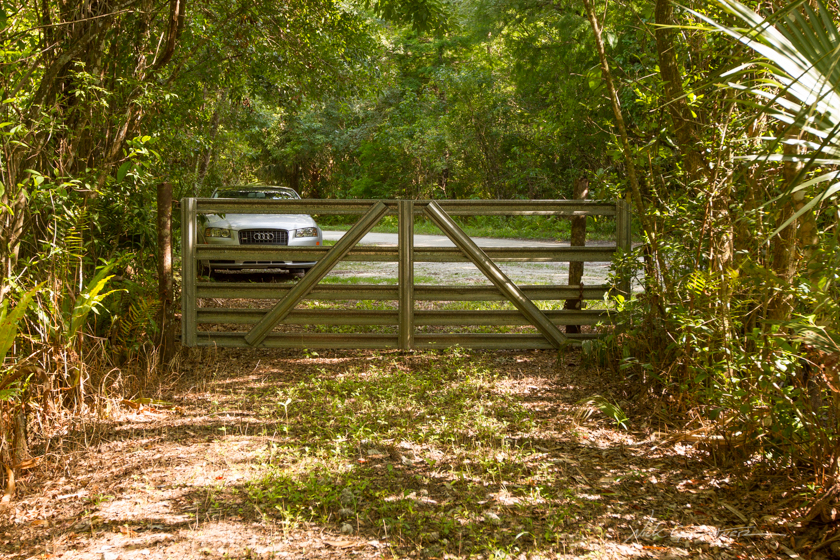 And after a few miles down the trail, it was time to head back and make sure I still had a car to drive home in.

If you ever get the chance to head through Jane’s Scenic Drive, take it. Early in the morning will give you better chances of seeing any animals. But even if it’s in the afternoon, the drive will definitely give you a sense of how Florida used to be navigated. 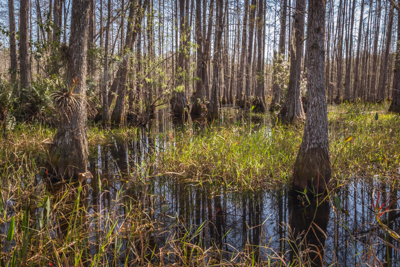