By nick May 7, 2012 Florida, Nature Experience, Swamp Walk One Comment
1 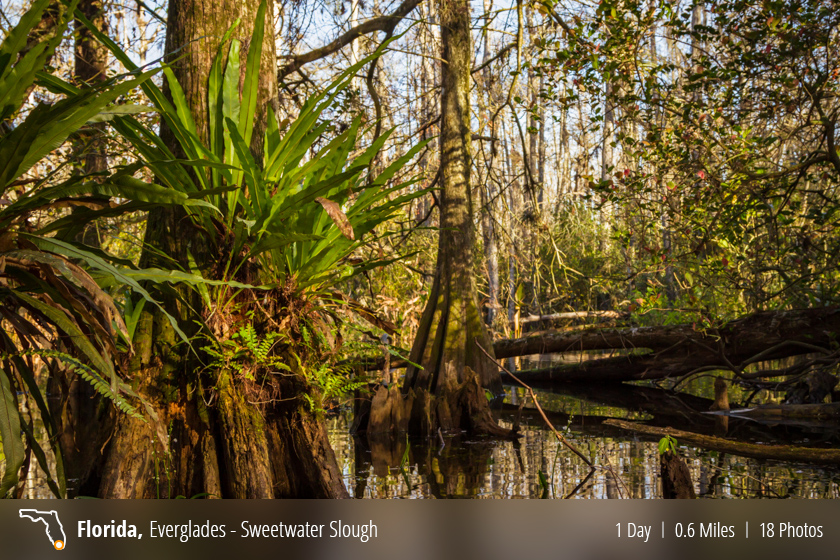 After my tiny taste of swamp walking back in the Okaloacoochee Slough, I was itching to get some serious swamping in. Having passed by the location once before, I decided my first real swamp walk was to be held in the Sweetwater Strand off of Loop Road.

I knew it would take me about an hour to get out there from where I lived, and I wanted to be there at first light. I wasn’t worried about parking, since it was just off the side of the road in the Everglades. But I wanted to get that soft sweet morning light coming through the trees, so I was up by 5am and on the road in no time.

To my surprise, as I pulled up, there was already a Lexus SUV right where I wanted to be. As I drove past, I could see it was an older gentleman surveying the surroundings.

Since there was plenty of room, I just pulled up a bit further and parked it on the side of the road. I figured I should go say hi since we were both at the same place out in the middle of nowhere.

As I walked up, we exchanged your typical pleasantries. The man then asked me what I was looking for, as I was obviously scanning the area for an entrance. I said “Adventure”. He laughed and asked where I was going to find it. I looked around and pointed out into the swamp, “Out there.” He laughed again, a bit nervous this time, and questioned “Adventure in the swamp?” I responded a bit less cryptic this time and informed him I was going to be going out into the swamp alone to take photos of the things I find. As I said this, a gator swam by us and I casually nodded to the man and confirmed “Yup, that kind of adventure.”

After a bit more talk the man had convinced himself I was insane. But that wasn’t going to sway me from my coveted adventure time. I headed back to my car and suited up in my waders and camera gear. I had a backpack with a few remote flashes and adjustable clamps. The plan here was to use both natural light and off camera flash to really highlight some of the natural beauty found in the Florida Everglades, only this time in waist deep swamp water.

As I was about to get going, the man drove up and told me “I just got off the phone with my wife and I told her what you are going to do, she said if your mother only knew what you were doing she would be worried sick.” I fully agreed, which is why I didn’t tell her about this till afterwords. 🙂 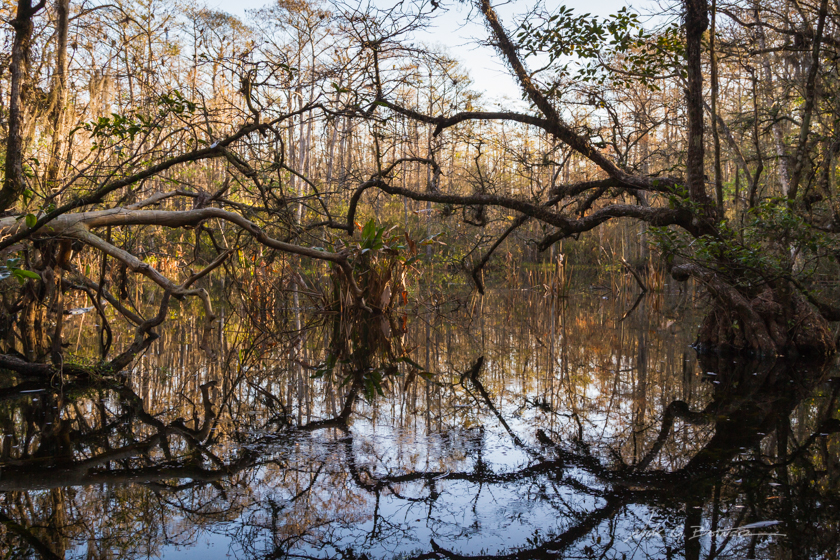 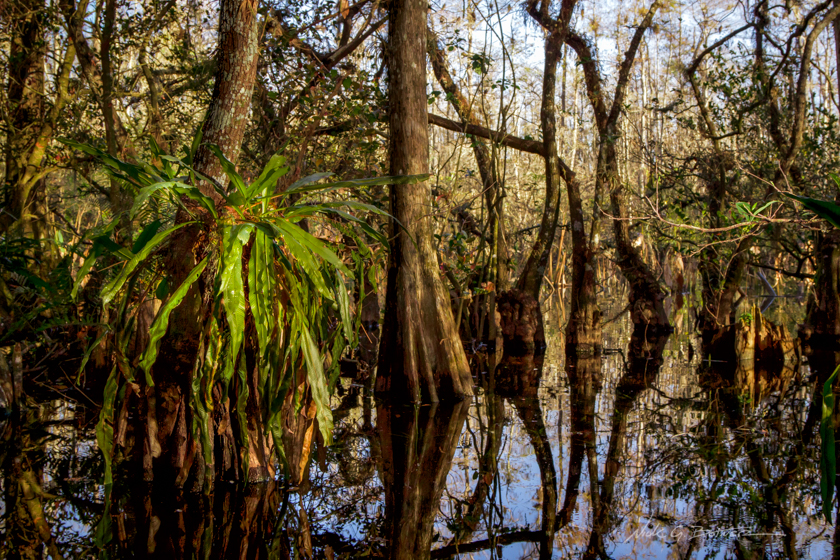 The water was cold. And the footing quite unstable. But the waders were working perfectly and it wasn’t long till I found my first subject, a chunky strap fern. Utilizing the branches from the adjacent trees I clamped my flashes up and calibrated their power settings. It took a bit of time to dial things in, but I think I got the effect I was looking for. 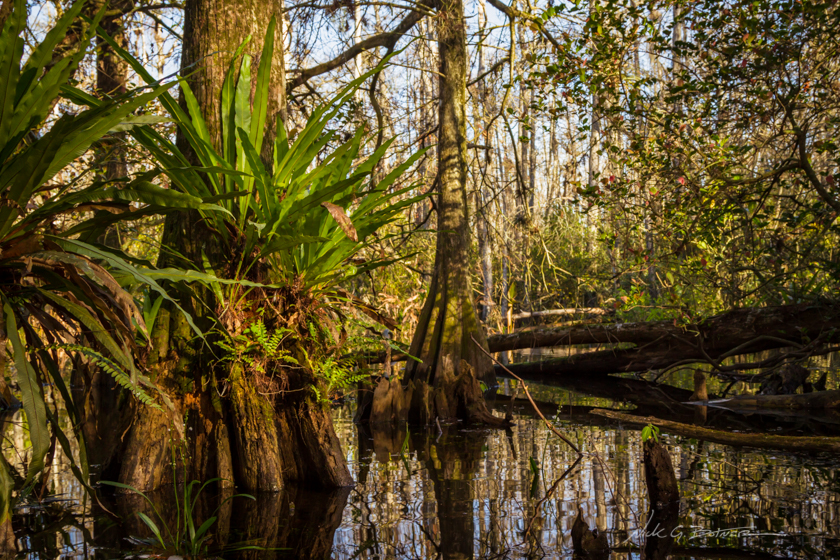 More strap ferns! Again, the surrounding lighting is natural, but the light on the subject is all off camera flash being remote controlled. Because the background is a small lake getting direct sunlight, this shot wouldn’t be possible if it wasn’t for the flash to come in and illuminate the subject. It would be either black or grainy with a blown background. 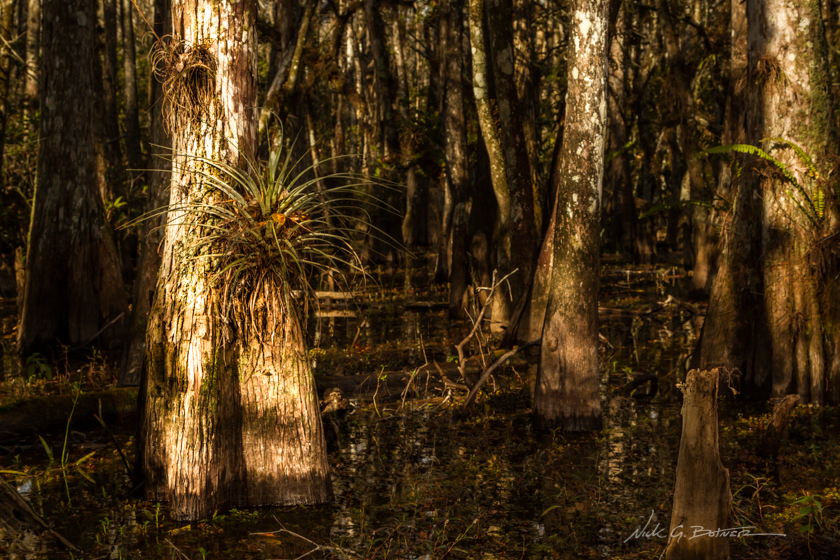 A little further in, water depths reduced to about knee level. However now there was much more aquatic vegetation restricting motion and visibility. 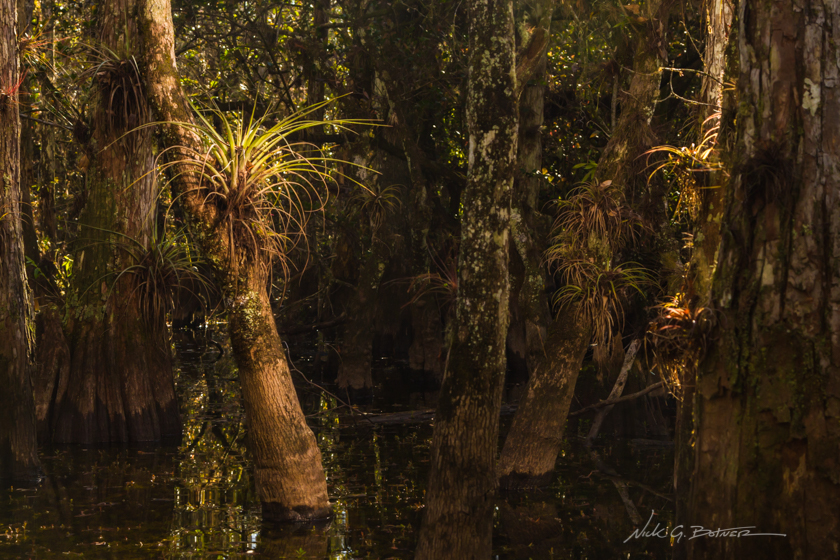 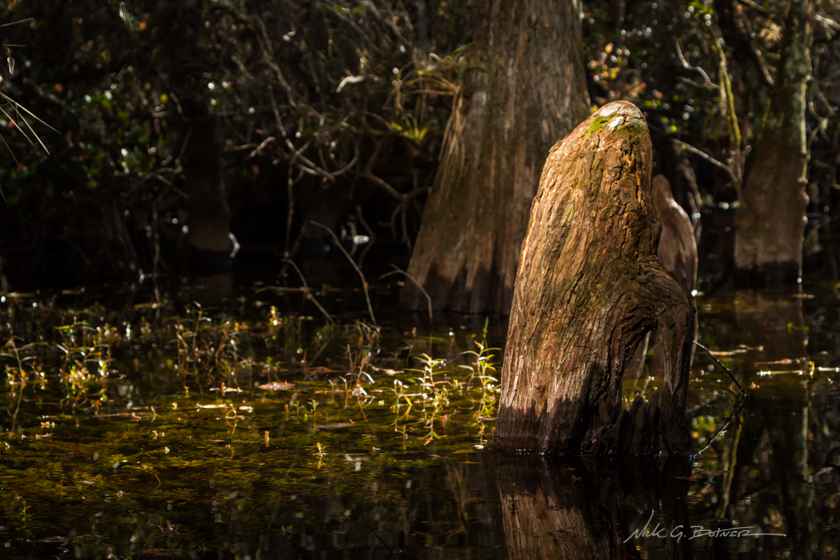 I found an interesting cypress knee and used the rising sun as a back light. From the front I snooted a flash to hit the top of the knee as to light it up from it’s background. 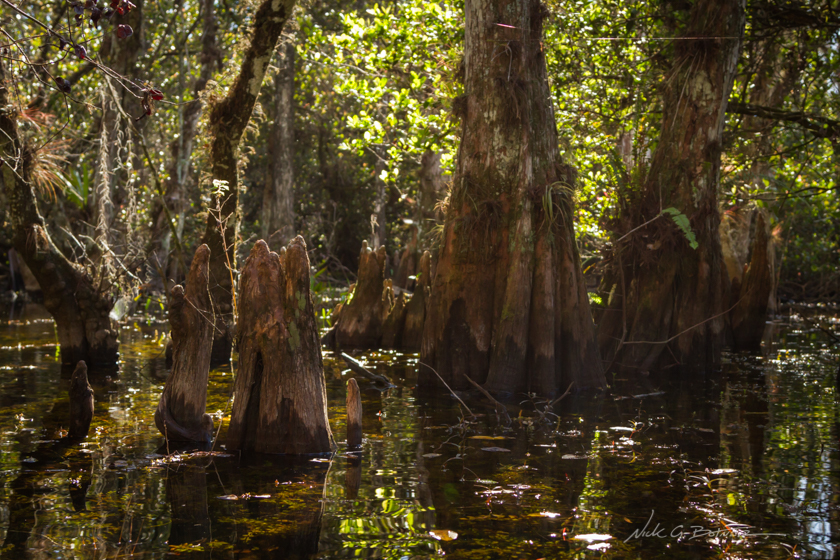 More back lit knees and trees. 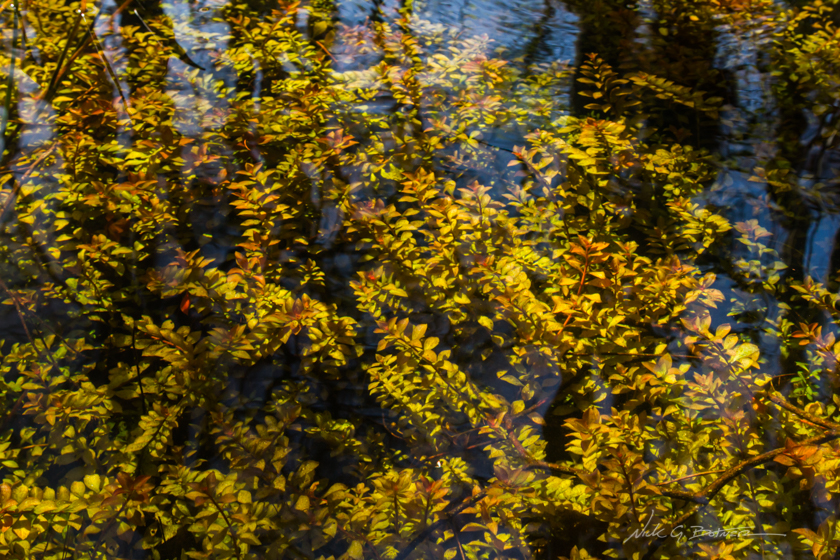 Walking through this is a bit cumbersome. 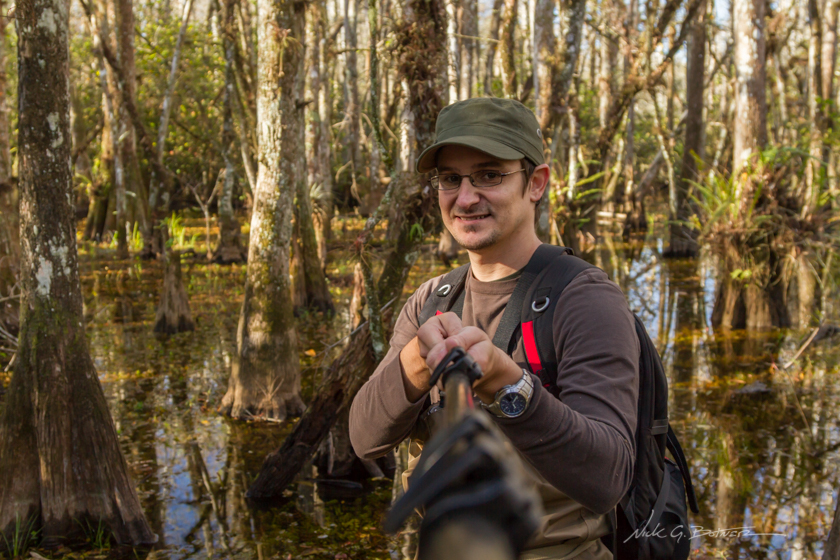 Since most of the shots involved me crouching down into water, I was using a monopod to help with the camera stability in low light. I decided  I would take a picture of myself with the delay. It took a bit time to get the shot. I had to focus on a tree at equal distance and then extend the camera out before the timer went off. And even then the background wasn’t always in perfect composition.

With all the messing back and forth between the camera and myself, It wasn’t until a branch hit me on the head that I looked up and saw what was causing the disturbance directly above me. 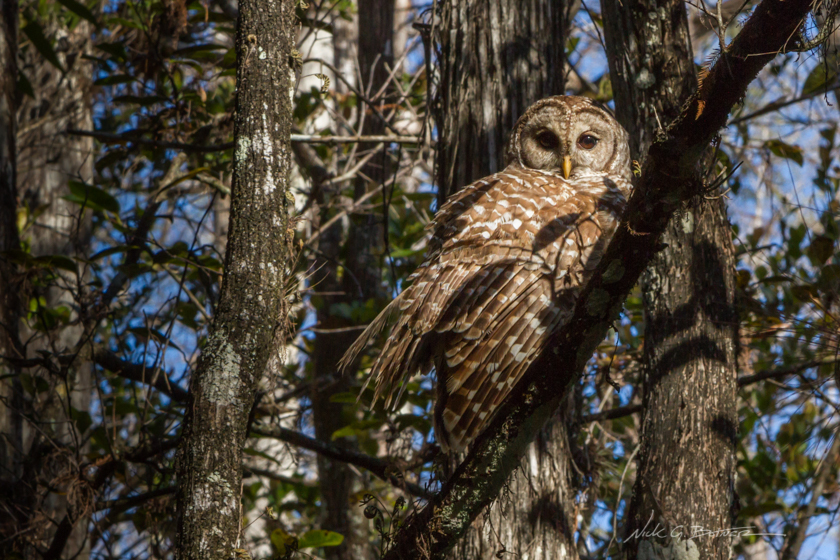 This Barred Owl was watching me the entire time. It was so well camouflaged that I didn’t pick it out until it flew to the adjacent tree. What I thought was remarkable is the owl would drop all its feathers down and imitate an air plant. The shot above is halfway between air plant mode and regular. 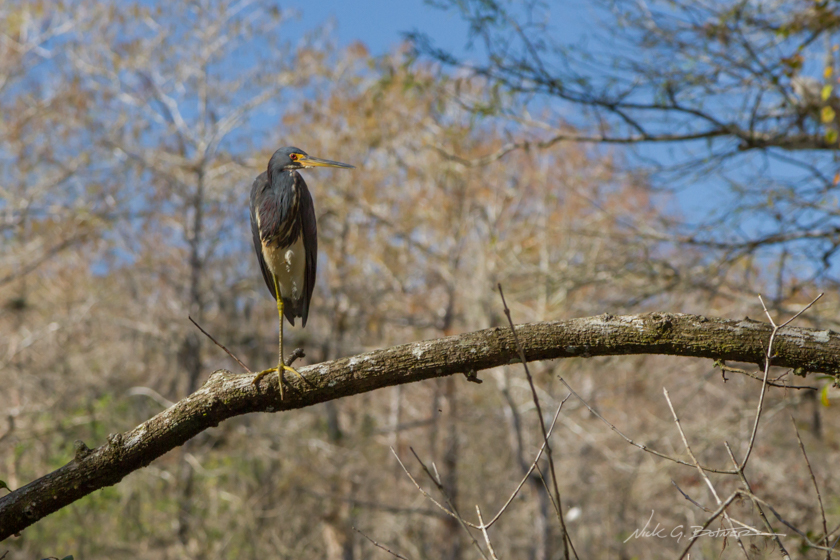 Having spent a few hours messing with flashes, clamps and monopod settings, it was time to start making my way back to the car. Plus the afternoon light was starting to get a bit hot for the shadowy swamp. This Tricolored heron watches me stumble around for a decent shot. 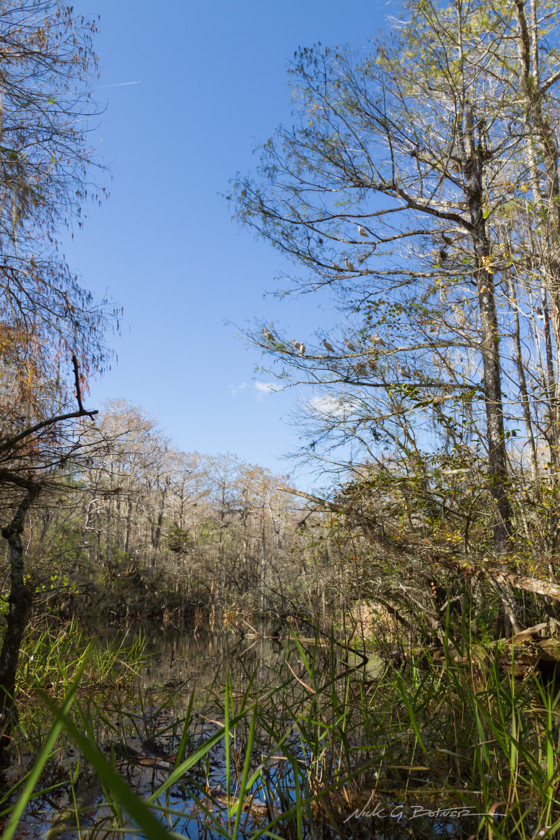 At the lakes’ edge, a flock of white ibis rest in the cypress trees.

The lake was an “off limits” area for me. I have a rule where I have to be able to more or less see the bottom and I need to be in the middle of obstructions so I know I am not completely vulnerable. All that open deep water is perfect for hiding gators to take advantage of me. Plus I could see the gators out there watching me, and then slowly ducking under water. so I happily stuck to the trees and more shallower parts of the swamp. 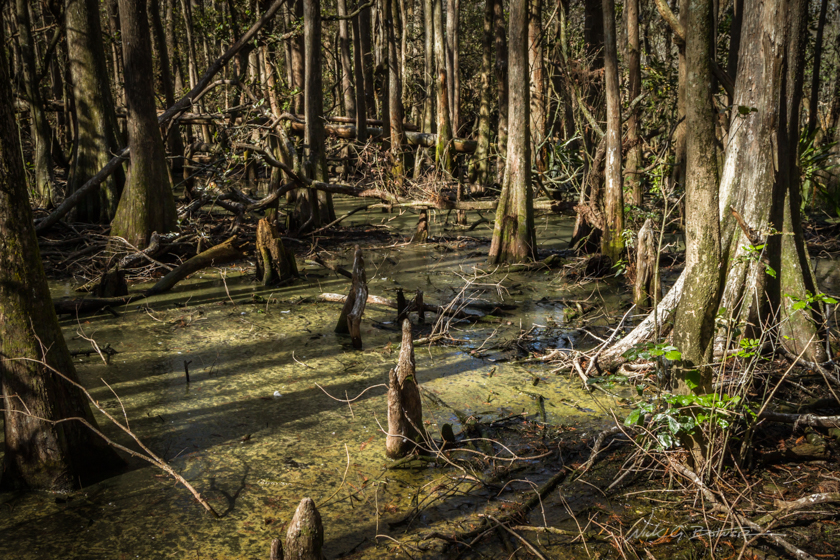 Some of the more slimier swampy parts. Lots of rotting trees under water make it for difficult walking. I was getting close to the car and becoming lazy in my swamp walking techniques. I stopped following some of my core rules and almost ended up with a camera under water. That brought me right back to focus. 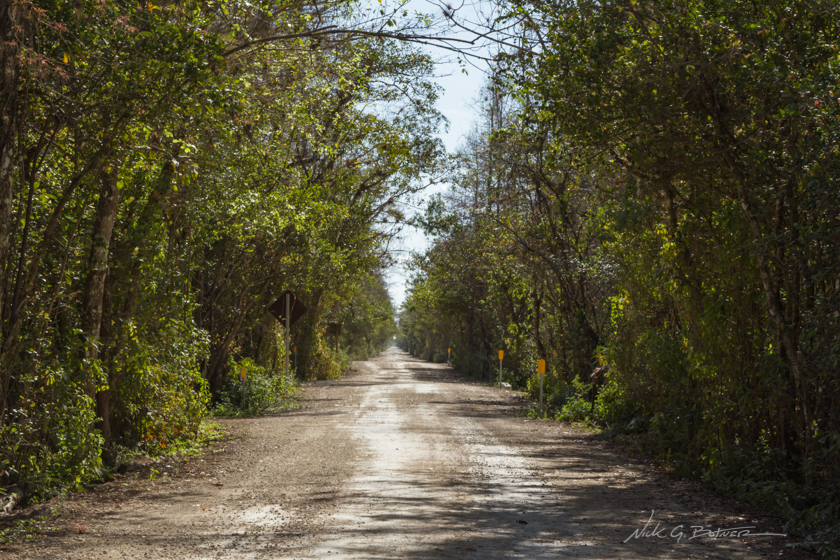 Back on the road! Here you can see all the traffic and congestion. 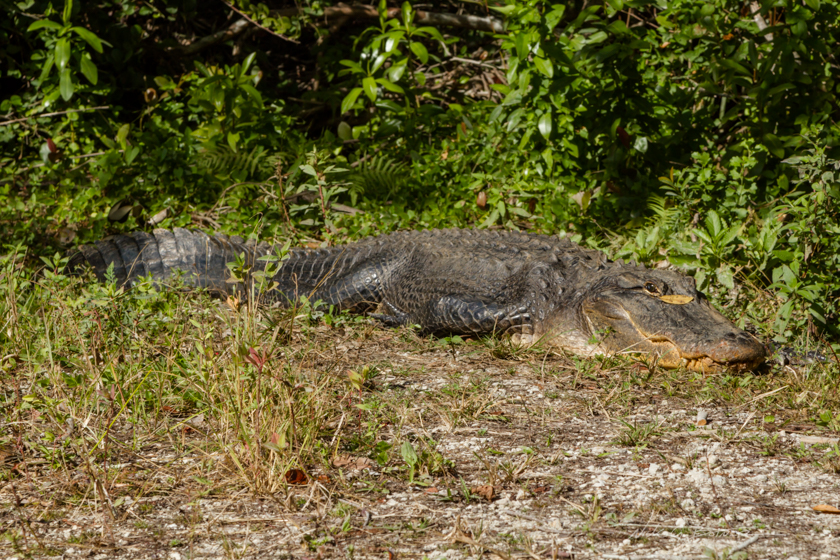 Most of the gators were out of the water by this point. Trying to sun themselves along the road in an effort to raise their cold blood temperatures. This little 6 footer looked like nothing could bother him. I figured I should go take that leaf off his face for a better shot. 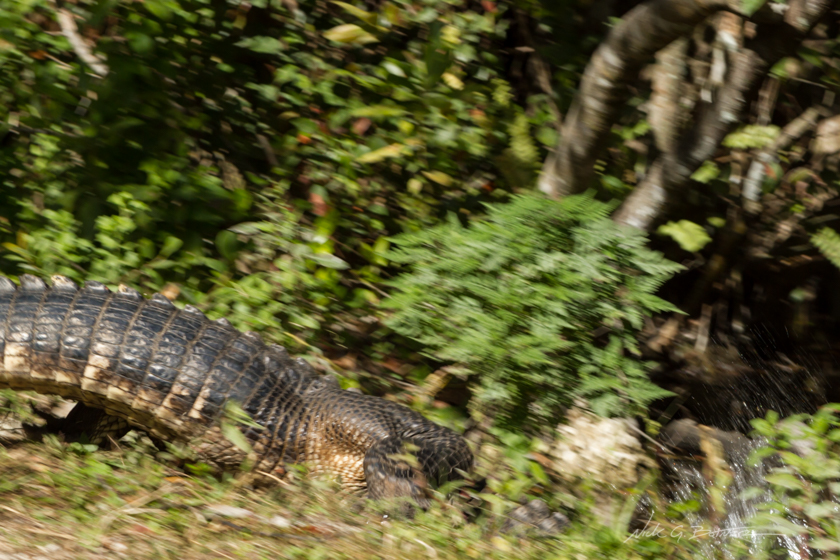 He wasn’t having any of it and exploded into the nearby water. As slow as the look, you should note they can move very quickly when they want to. 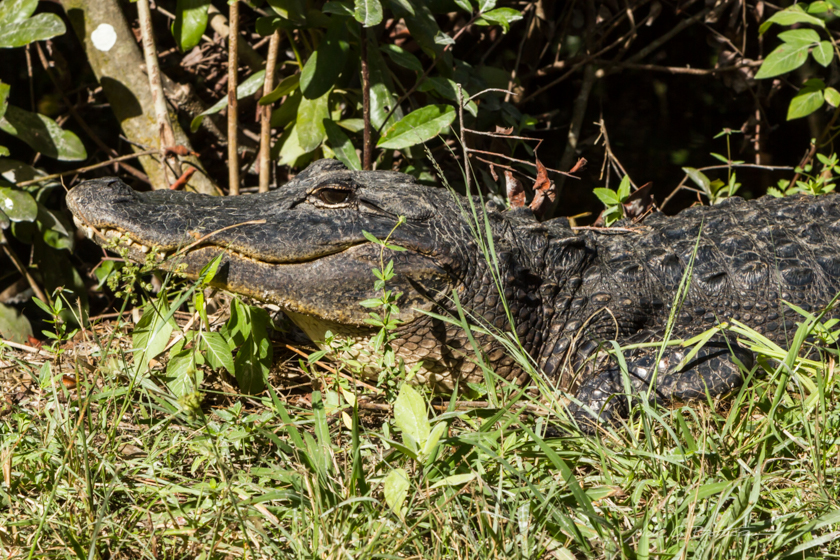 Loop Road at this point was practically lined with alligators sunning themselves. 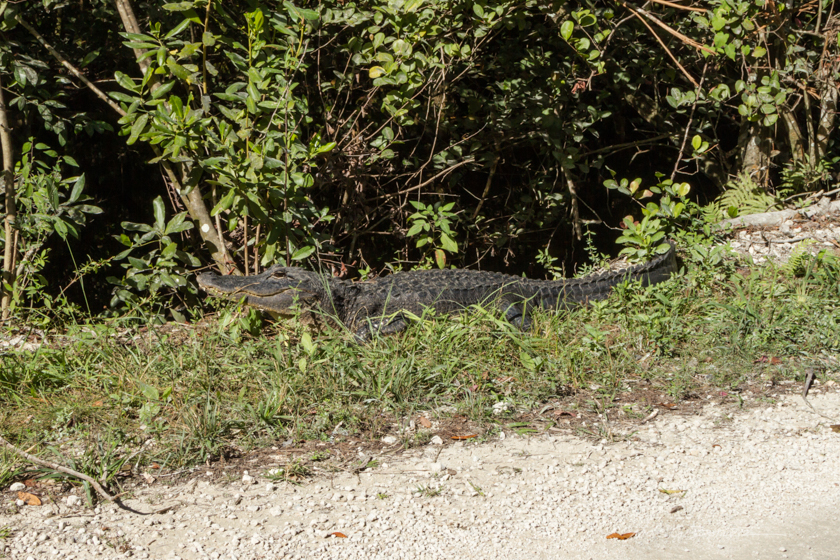 For reference, here is a little guy on the side of the road. That’s about 8 feet from me. And they were everywhere. A tourists dream for sure.

All in all, the adventure was a complete success. I learned a lot about flash, learned how to quickly set up expensive camera gear in waist deep water and got to see a barred owl.

Here is a little map of the area I went to. The ground covered is nothing compared to what I normally cover when hiking. But that’s because most of the time was spent stepping over fallen trees and messing with flash. Hope you enjoyed this little glimpse into the uncharted everglades! 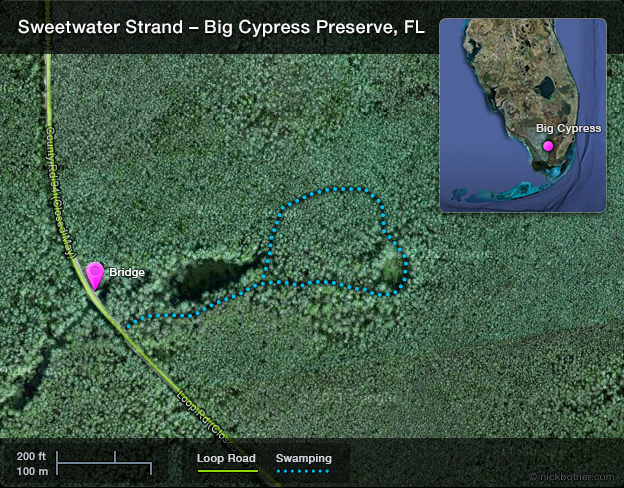 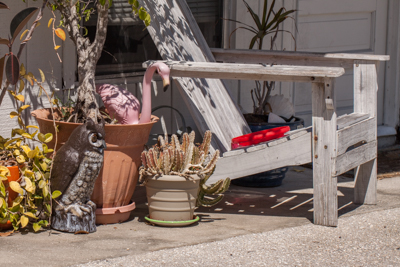 Back Streets of Downtown Naples, FL

Back Streets of Downtown Naples, FL