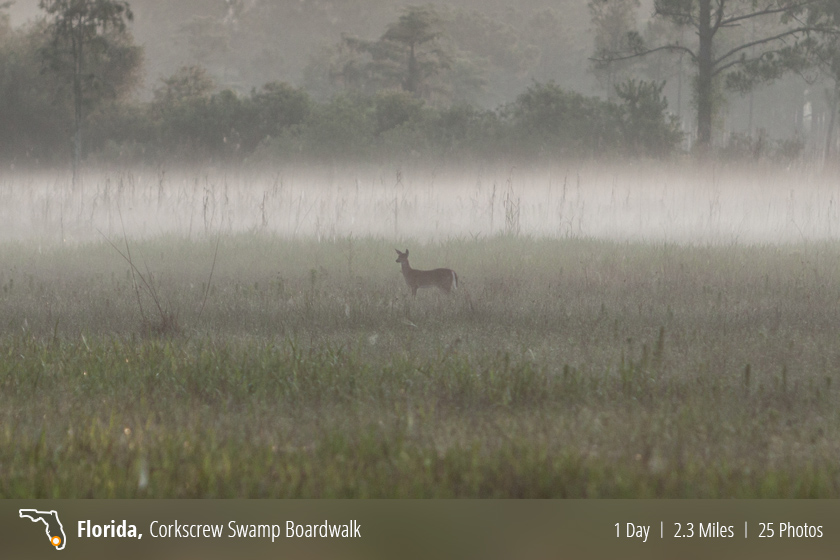 Located in South West Florida, 14 miles inland from I-75, Corkscrew Swamp Sanctuary boasts the longest boardwalk (2.25 mi) in any US park. It’s also home to over 200 permanent/temporary birds and has the largest forest of ancient bald cypress in North America. The Sanctuary is owned and operated by the National Audubon Society which it acclaims as their crown jewel of sanctuaries.

It was a muggy Sunday morning. The Sanctuary opens at 7am. We arrived at 6:45am to gear up and get ready.

When we entered the lobby, the gentleman on staff informed us that there hasn’t been any rain in quite some time. He went as far as to tell us the conditions were extremely dry. Usually there is almost two feet of water out there. Without all the water, there isn’t going to be much wildlife.

We caught a break on the price and went in anyways.

The entire trail is a loop with a split down the middle. You are supposed to go one way, but since we have been here before, we went the reverse and headed to where the good stuff “usually” is. 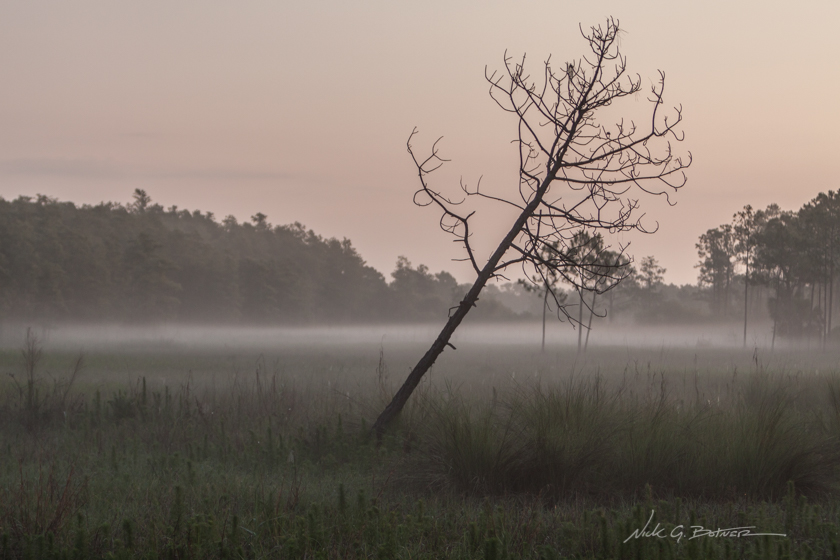 The main entrance sits in a slash pine forest. But as you get on the boardwalk you first trek over the grass plain. This is the crossing of the plain, and as you can see there was still some slight fog on the ground. 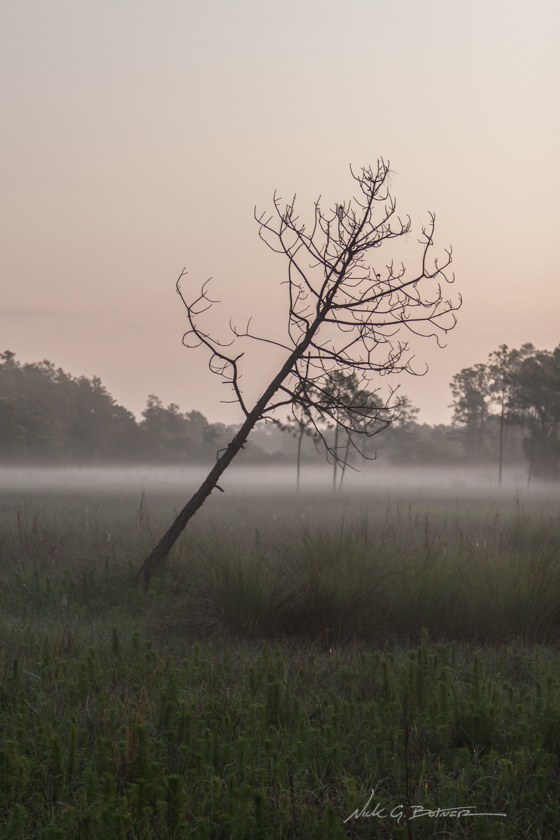 This loan pine was pushed over from a hurricane. 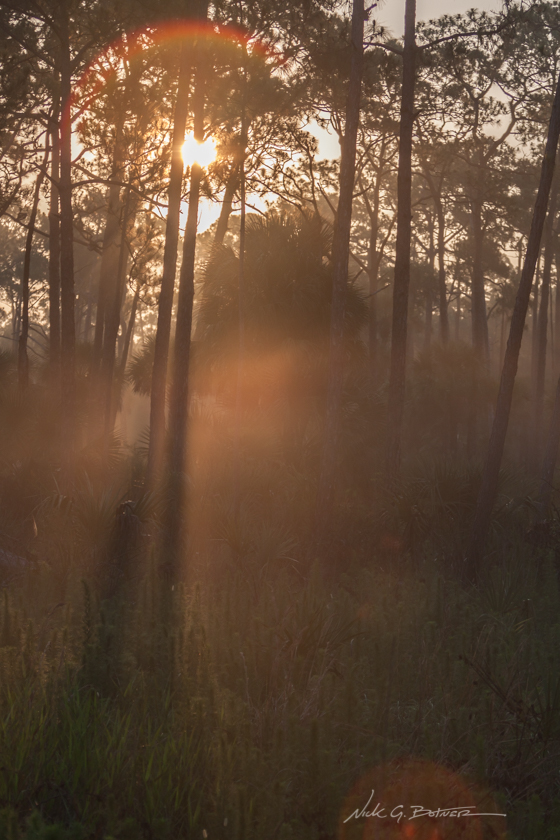 Looking back into the pine forest, the sun is starting to peek through. 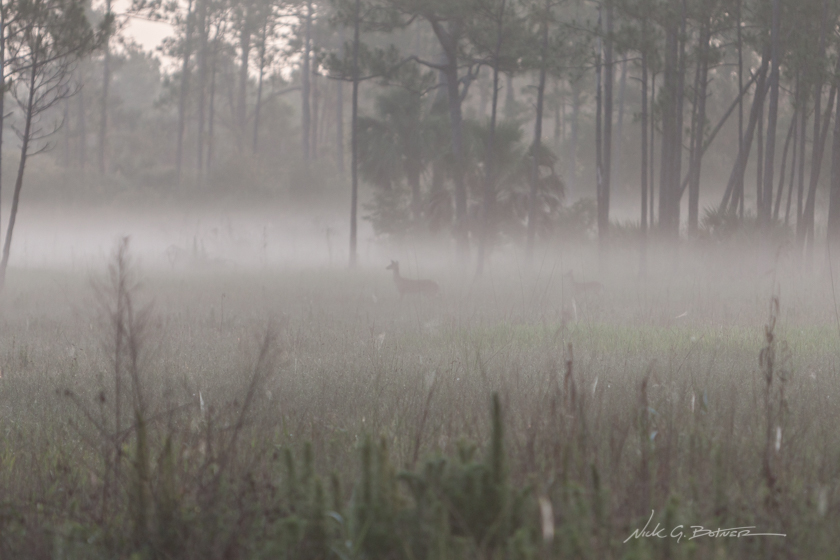 Almost missed it, but of in the distance, a mother white tail deer and her fawn were feeding. 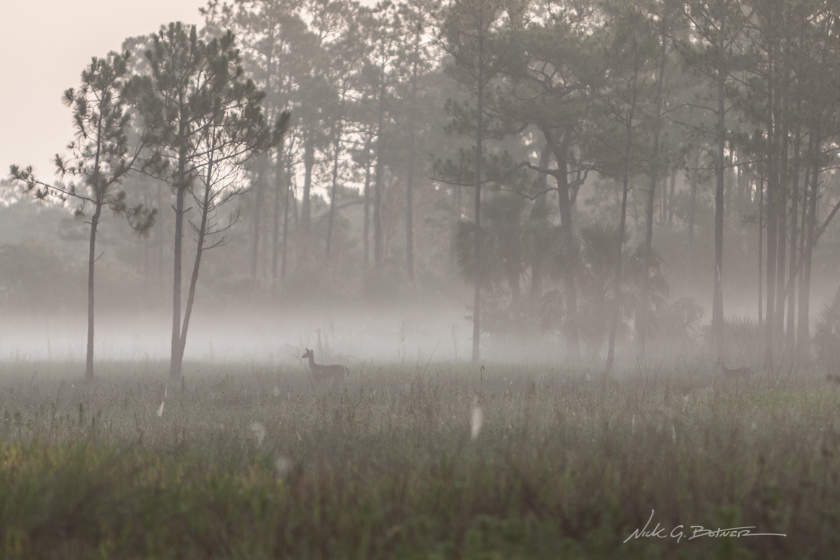 They made their way out to the middle of the grass, but decided to turn back around. 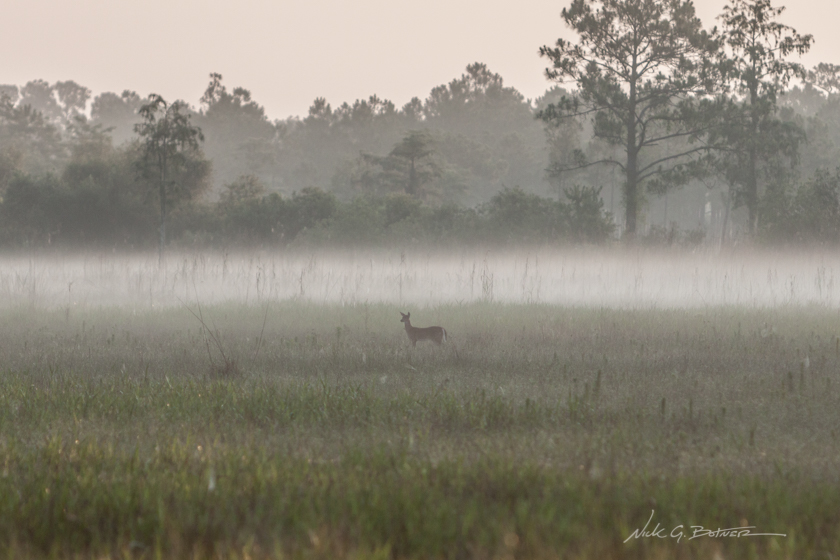 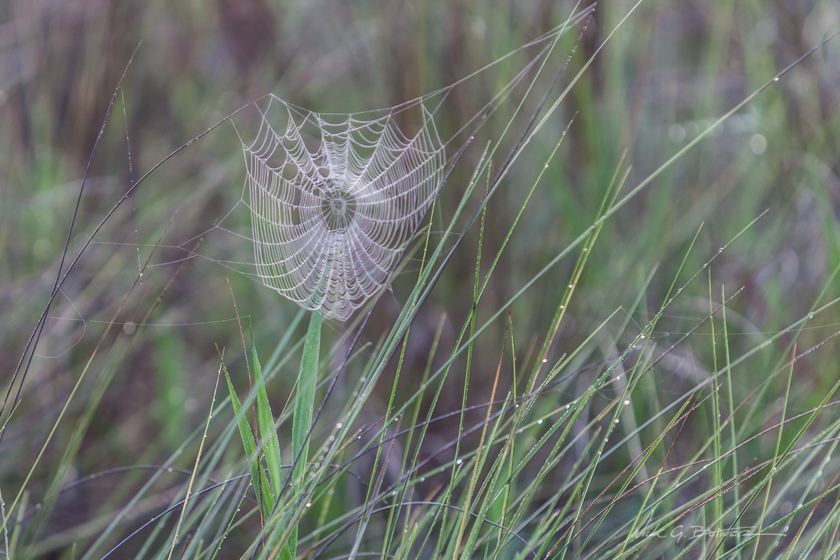 You can see how wet things were from the previous night’s dew. 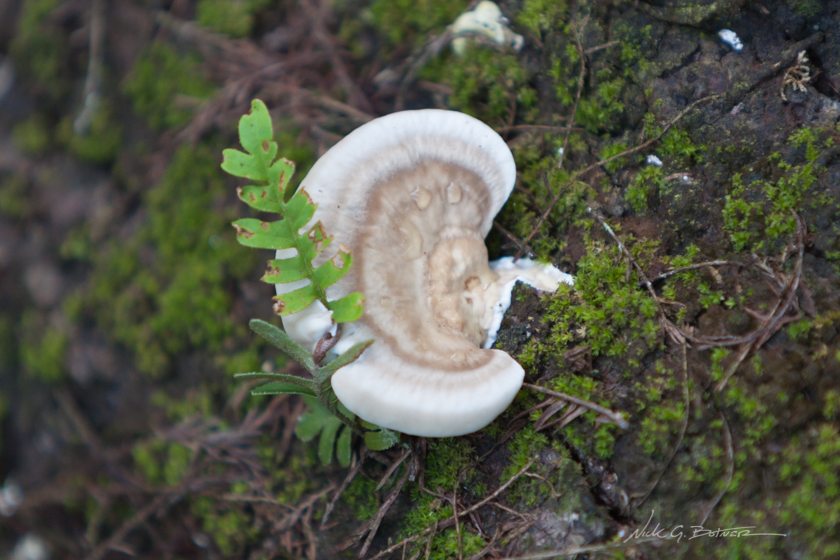 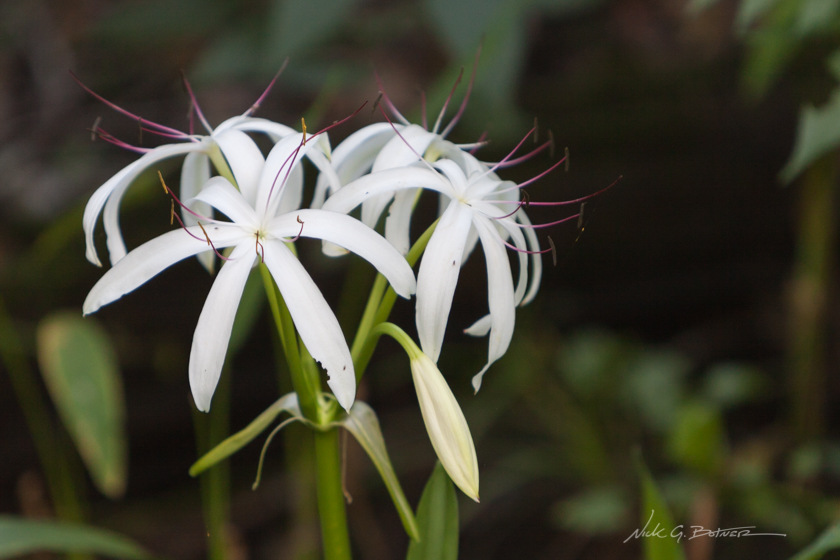 There were quite a few Swamp Lily (Crinum americanum) blooming once you got past the plain and into the cypress forest. 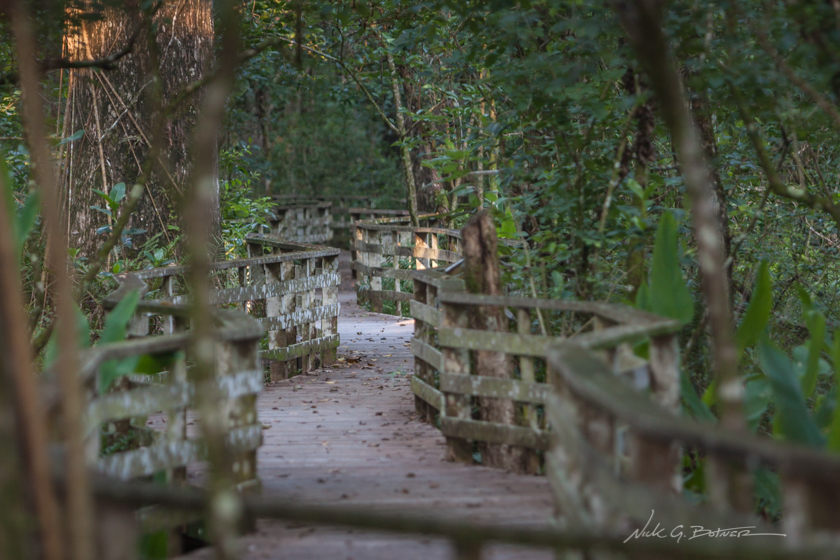 Conditions in the cypress forest are still dark. In this shot, part of the boardwalk is spotlighted by the breaking morning light. 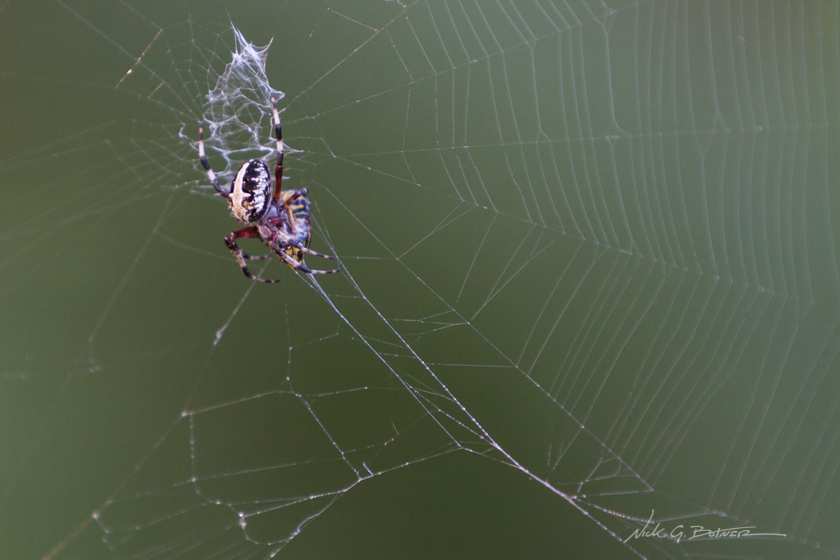 I’m not much of a fan of spiders, but this one is eating a hornet. Which is fine by me! 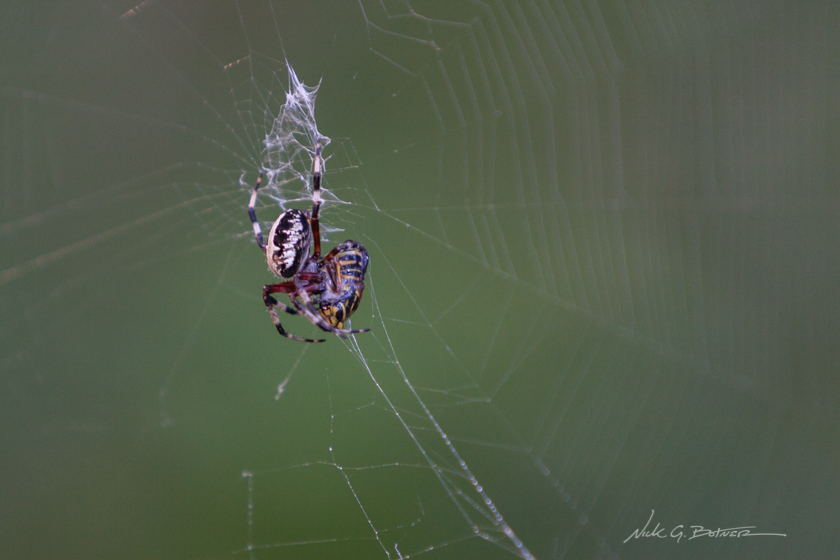 Thankfully he wasn’t hanging over the boardwalk, but off to the side.

Speaking of which, I was given the pleasure of going first since I didn’t mind running into spider webs. We were the first ones on the trail and that meant the path was yet to be cleared.

There was one moment I was looking off to the side. My friends had ducked past a large Golden Orb Weaver web. While I, plowed right through it. I guess I had the whole web draping my head to my shoulder. One of my friends made a horrible face which made me think I had the spider on my head. He was just grossed out. Unfortunately I wiped it all off thinking I was in danger. But I got yelled at because they said it would have made a great shot…I wasn’t too bothered by ruining their shot this time. 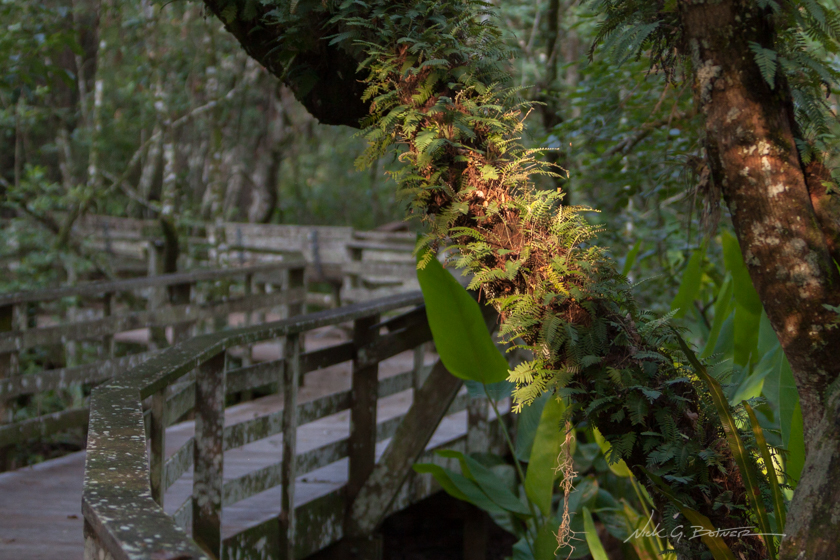 Usually by now you are seeing a lot of alligators and other birds.

Aside from the small hyper birds who wouldn’t sit still long enough, all we had were textures, flora and insects. I was trying to capture the warm light on the ferns. It’s ok, but nothing special really. 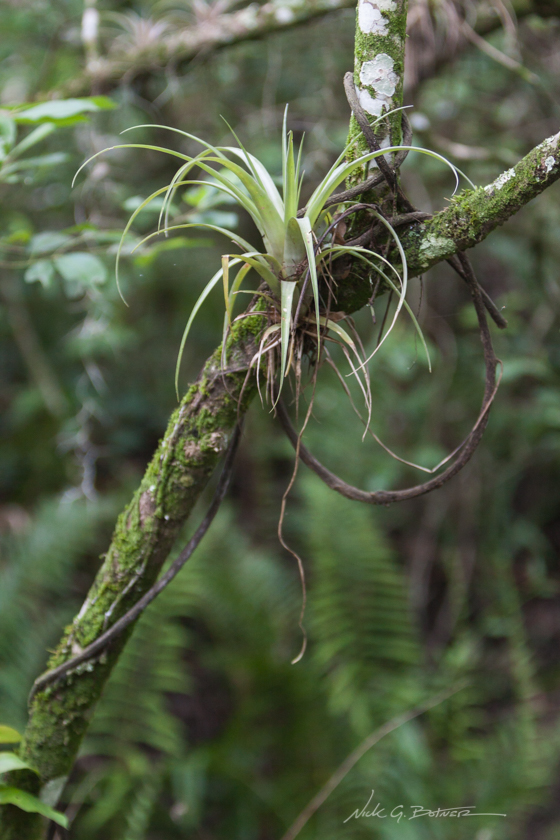 This is actually my favorite shot from the trip. It’s a Florida airplant (Tillandsia Simulata or Bromeliaceae), and there is some kind of vine wrapped around the tree. If it wasn’t for that vine, I probably wouldn’t have taken the shot. 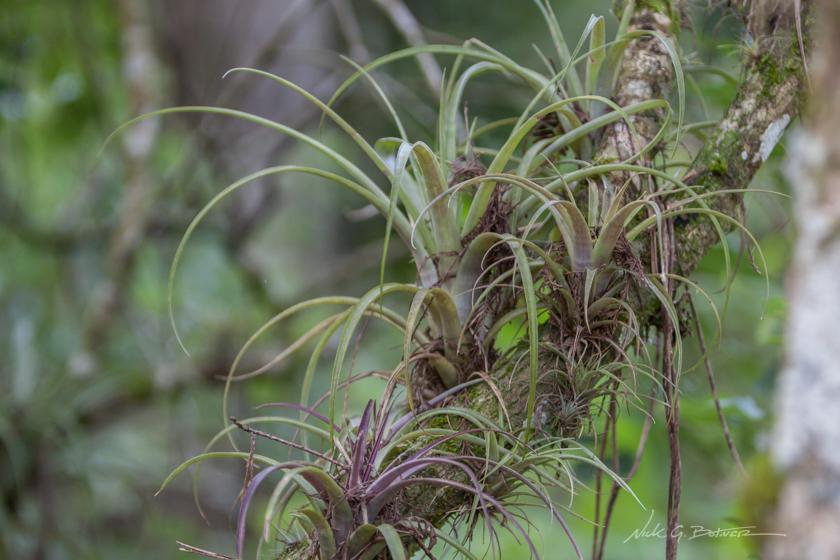 I actually deleted quite a few airplant photos. I only saved this one due to the mass quantity and that purple looking one near the bottom. 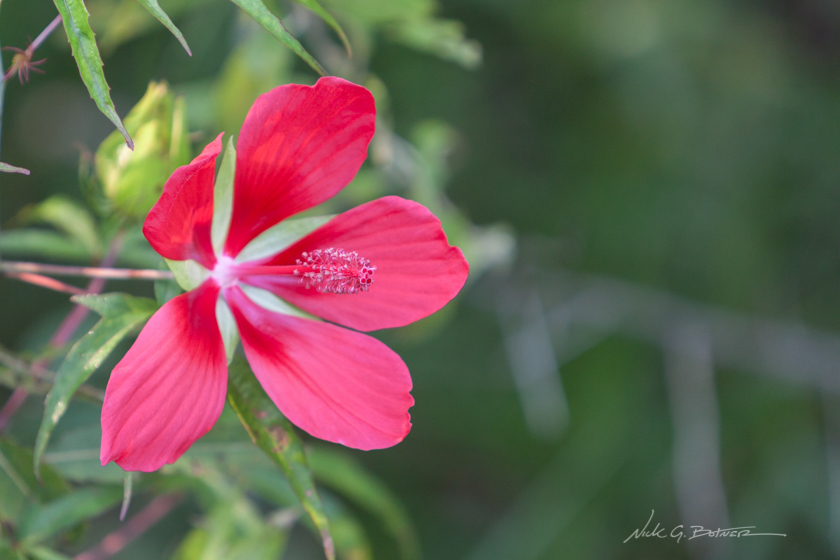 It’s a real pleasure to see a hibiscus growing naturally in the wild. I never really cared for a hibiscus in a garden. It’s just too boring for me. But to catch this in its natural environment is a treat.

It’s called the Swamp Hibiscus (Hibiscus coccineus) aka Scarlet Rose Mallow, Texas Star or Scarlet Hibiscus. It only blooms in mid to late summer and early fall. I’ve been to this place a lot and I have never seen this flower in bloom. Of course the swamp is all dried out right now. But at least I get to see this. 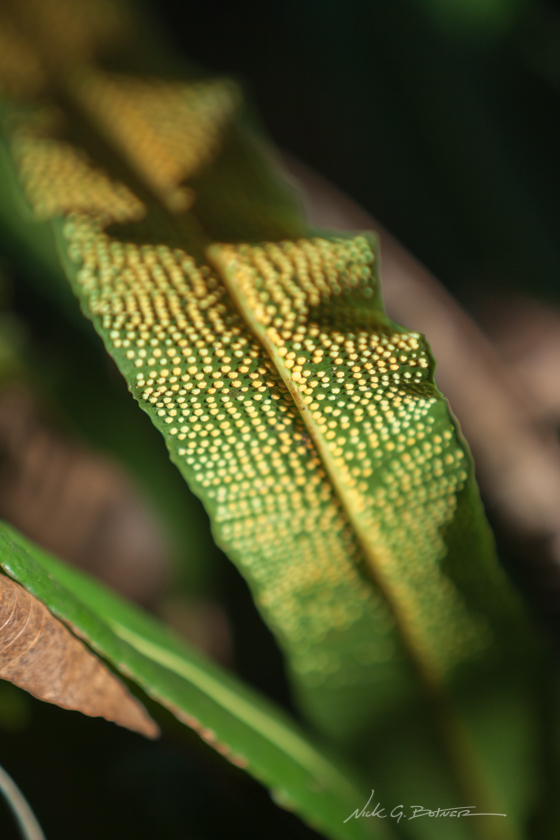 Ahh the Golden Leather Fern (Acrostichum aureum) I have a special place in my heart for ferns. And the bigger the better. These Ferns can grow up to 6ft tall and they as wide as they are tall.

In this shot you can see the golden spores underneath the blade. I would estimate that blade to be almost 4 inches wide. 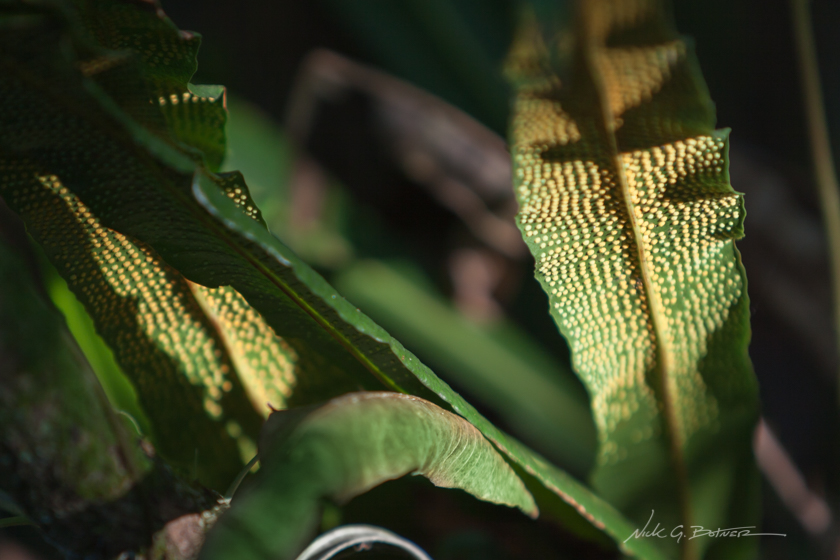 Getting a little more dramatic with the shot. I am highlighting the spores as they are revealed through the morning light. 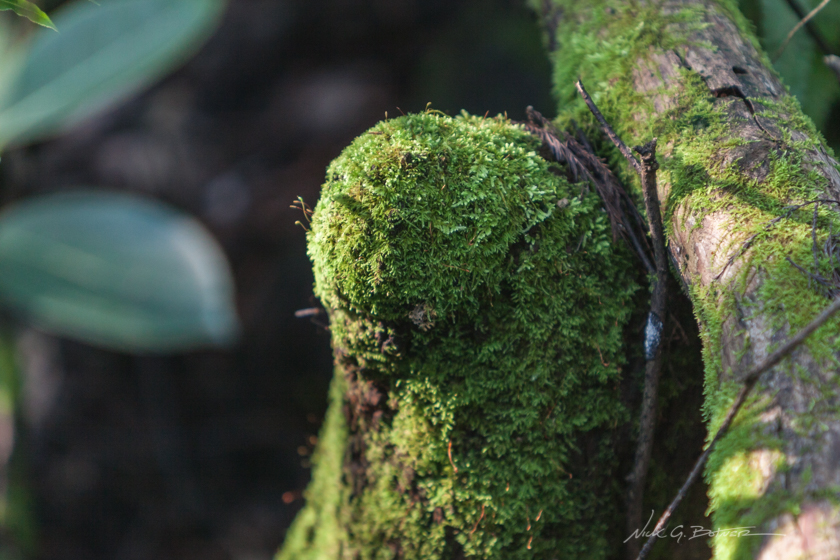 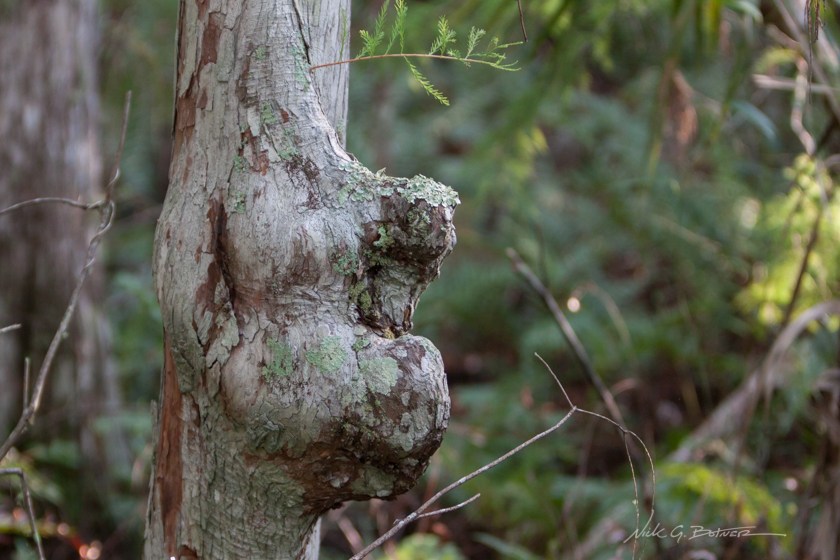 This cypress is probably too young to be a Seminole Pointing Tree. But it was interesting to see such a growth coming out from the side. 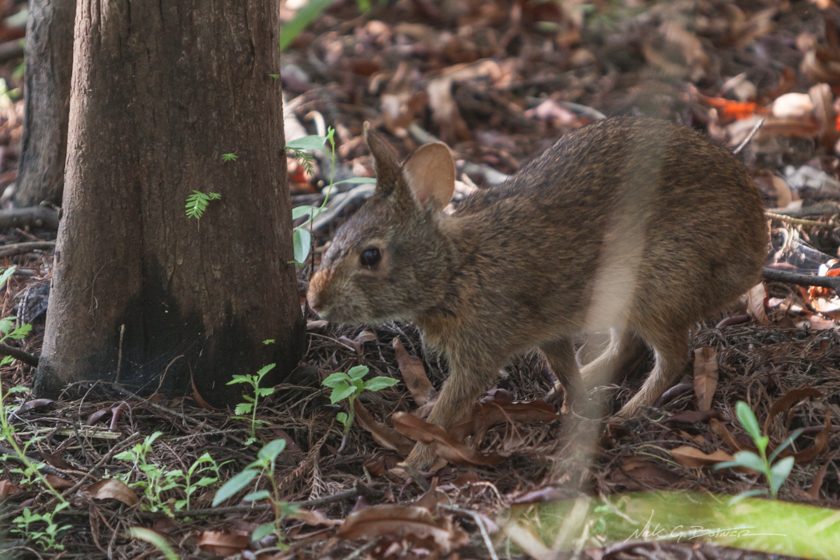 I did manage to catch this little Marsh Rabbit (Sylvilagus palustris) off the side of the trail. I think I stopped to retie my shoelace and there it popped out. 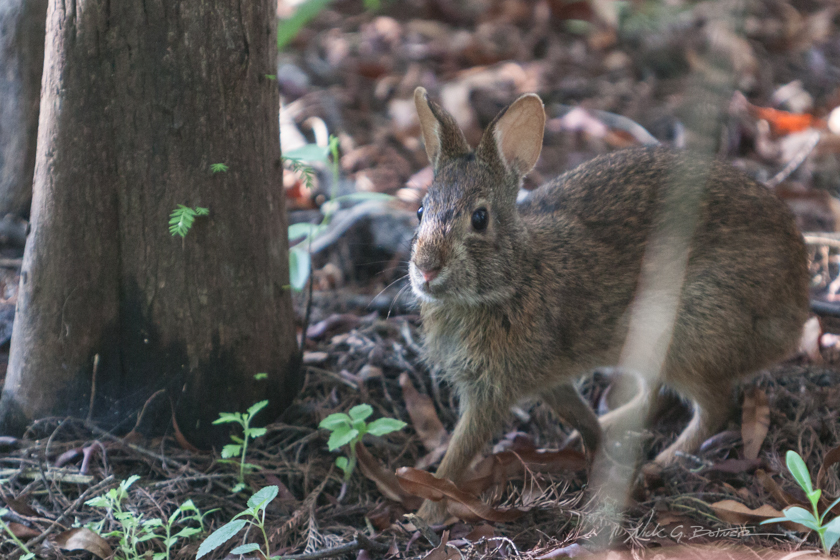 And it saw the flash!~ 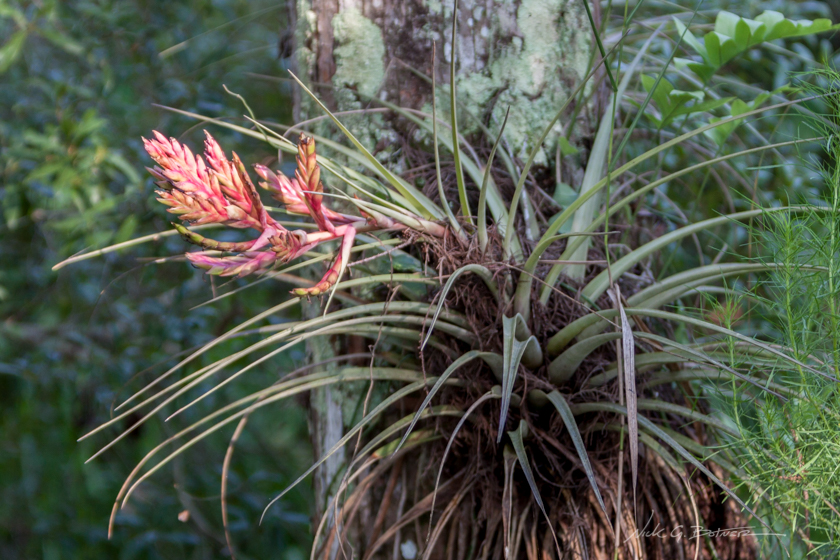 Almost done with the walk, I finally get a decent airplant in bloom! 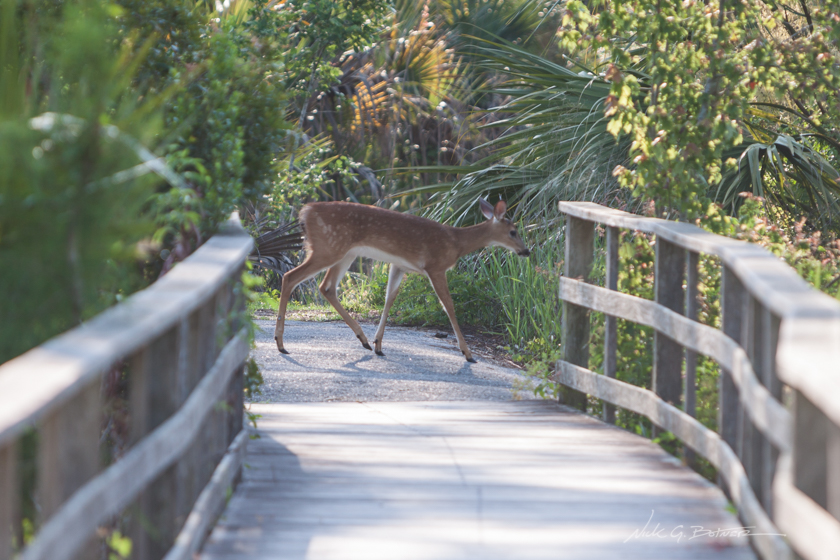 And what a treat. This is the end of the boardwalk. That same mother and fawn who were grazing in the grass plain a couple hours ago are now passing through the exit of the trail.

I did miss the mom coming through, damn me and my looking up. But I got the baby in perfect stride.

The funny thing is, is when you get off the boardwalk, there is a sign that says “Animal Crossing”. In all my years I have seen that sign and wondered what it would be like to actually see animals using the crossing. I guess I finally got lucky.

In case you would like to visit Corkscrew Sanctuary, which you should. Here are some links on the trail and the official site.

A map of the trail and how to get there

Thanks for looking and I hope to head back again when there is some actuall water on the ground! 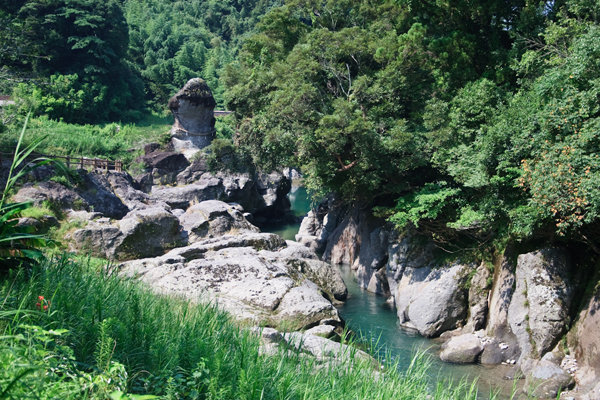