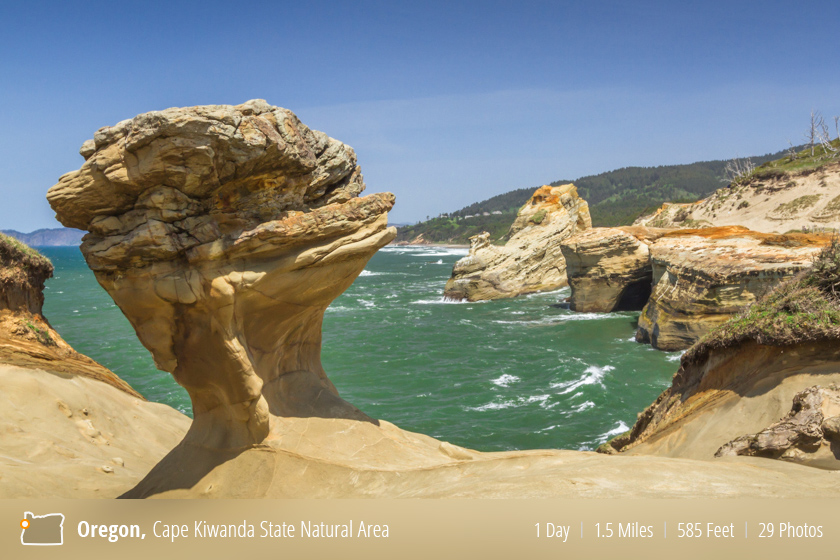 When I last wrote about my trip along the Three Capes Scenic Route. It ended with me barely catching sunset at the third and final cape, Cape Kiwanda. This time, I went back to Cape Kiwanda and devoted an entire day to exploring and enjoying some of the local fare.

As with a lot of popular spots along the coastline, you will want to arrive a little early. The parking lot is shared with the Pelican Pub and Brewery. So after a long day on the beach, you can stop in and get a bite to eat and perhaps cold beer.

Ok, enough with the promotions, on to the photos. 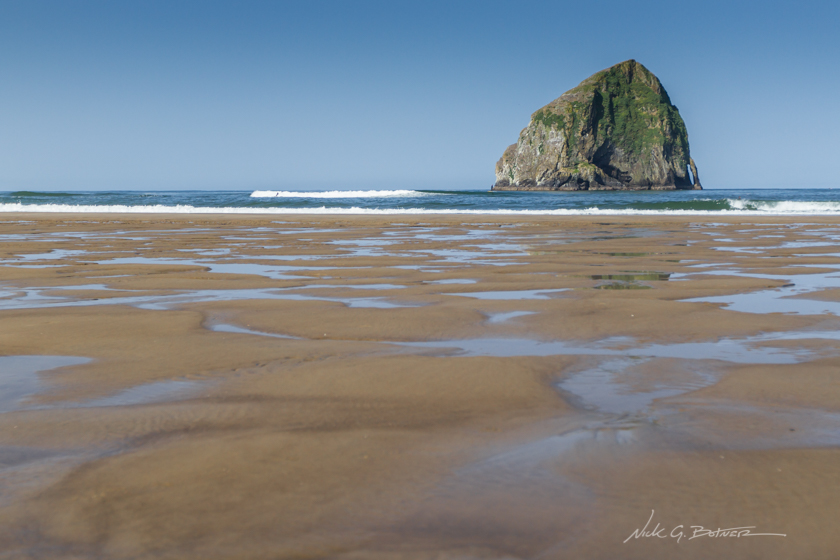 As soon as you arrive, the first thing you will notice is the massive monolith, Haystack Rock. 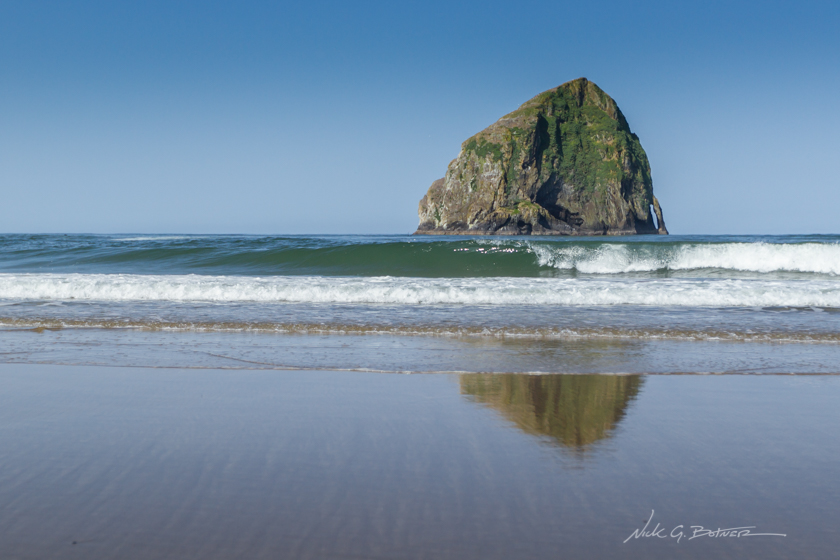 The Haystack Rock is 327 feet tall and is claimed to be world’s fourth largest monolith that can not be reached by land. 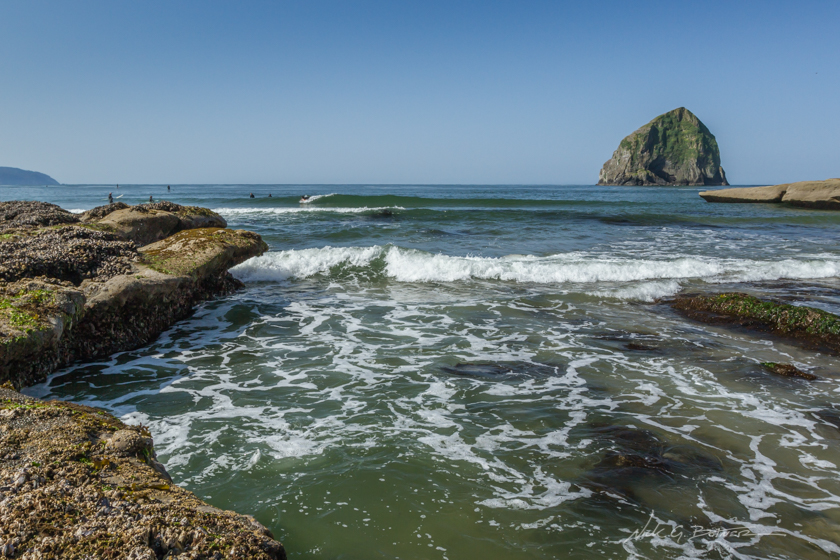 It’s really hard to take a photo and not include it somehow. In the photo above, surfers catch an early morning swell. 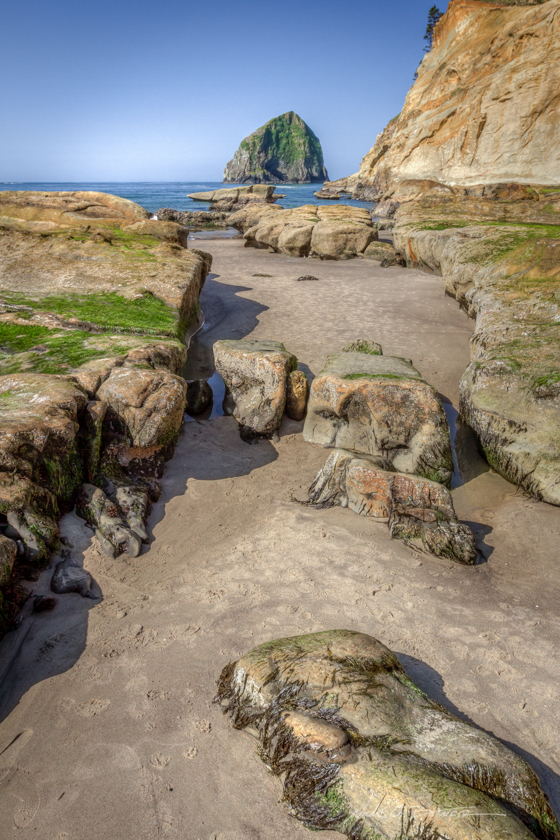 One of the best things about visiting the Oregon coast is checking the rocks at low tide. 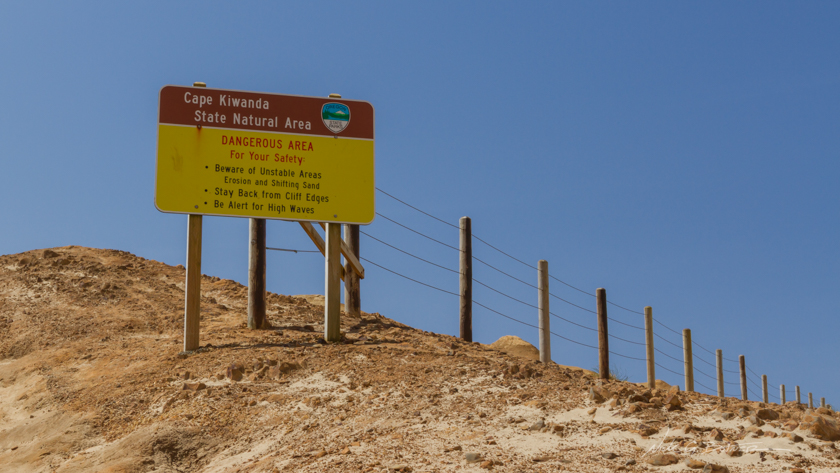 On towards the cape! After a short stroll along the beach you make your way to the cape. There is a path up the beach that leads you towards the giant sand hill. But if you like, you can hoof it out onto the cape itself. 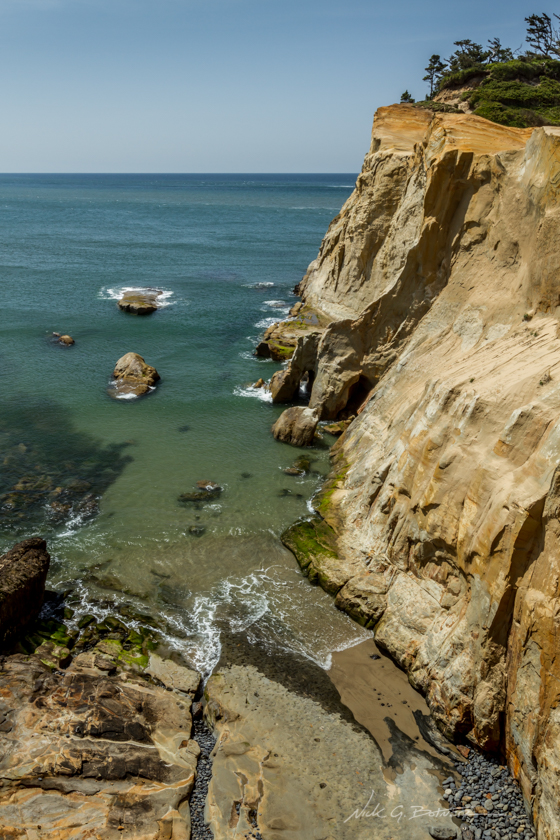 A trail leads you along the cliffs edge. 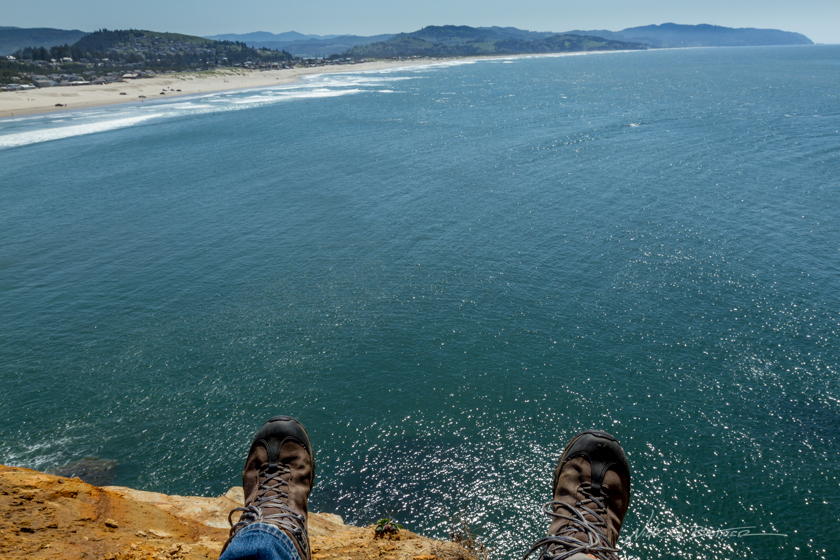 Sitting along the cliff, taking in the view of Pacific City. 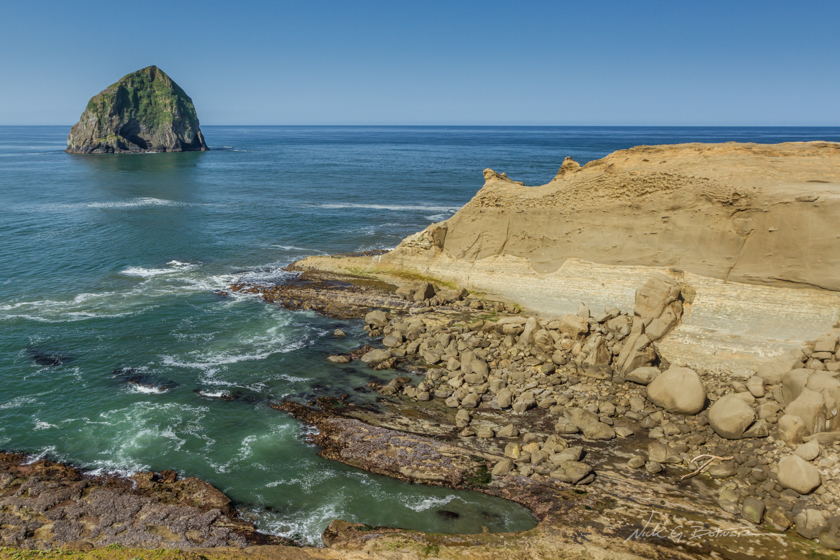 Almout out towards the end of the cape. 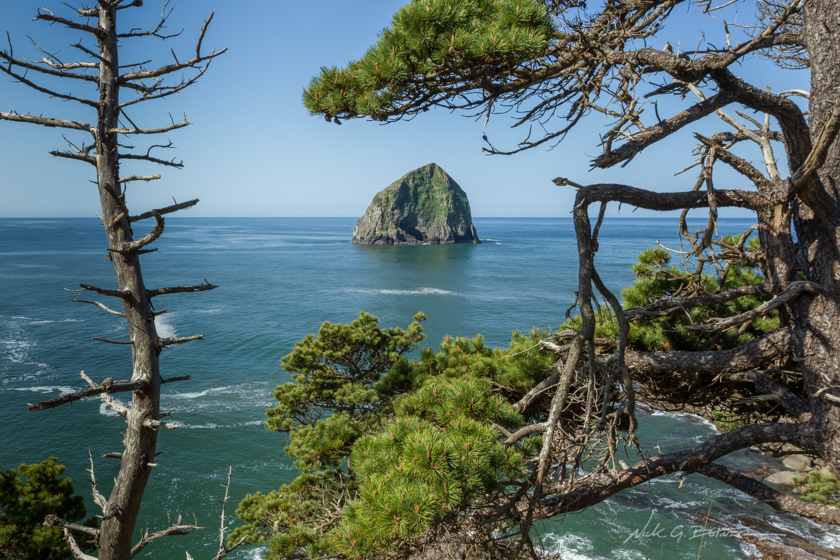 So many monolith photos. You should have seen all the ones that did not make the final cut. 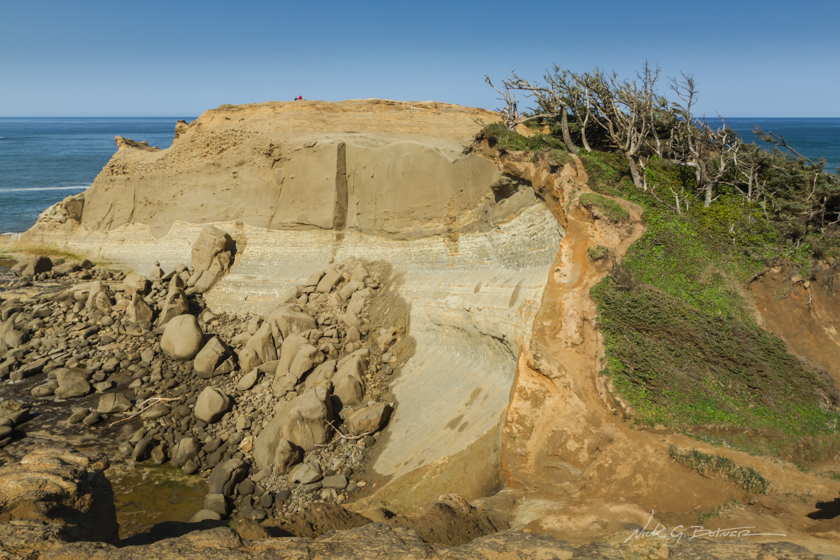 It’s a little hard to see, but the trail to the end of the cape is right along the ridgeline where the foliage ends. 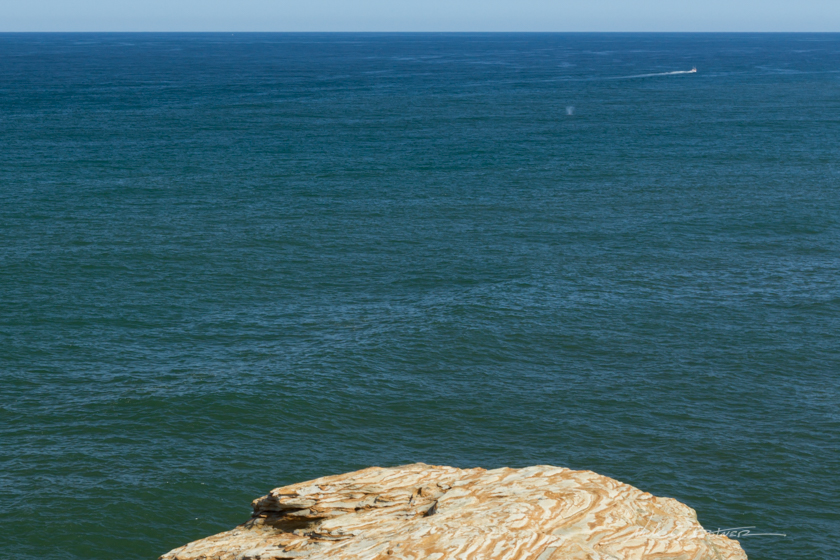 Out on the cape, this time I could see a small pod of whales. 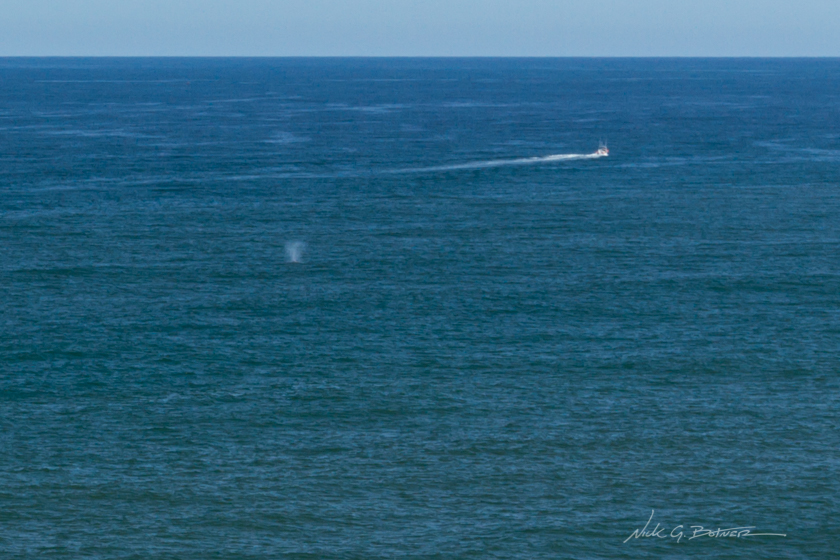 A little bit of zoom on the whale action. 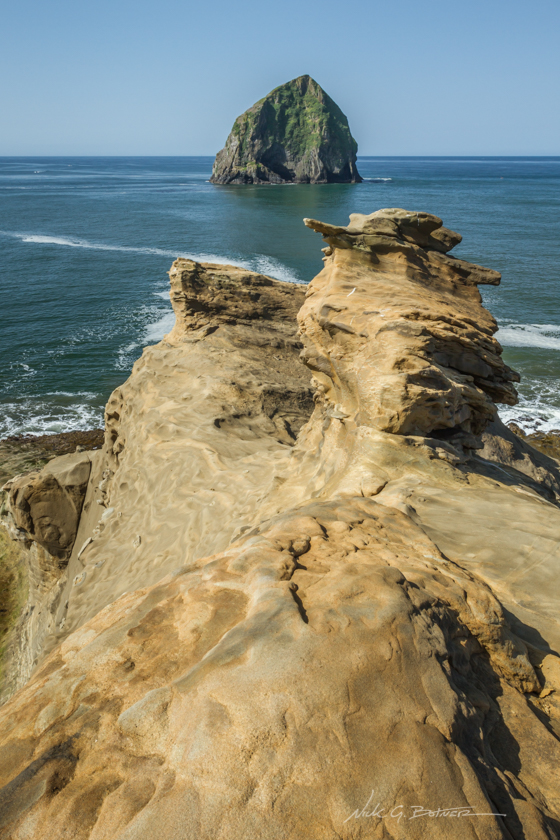 The final steps towards the end of the cape. 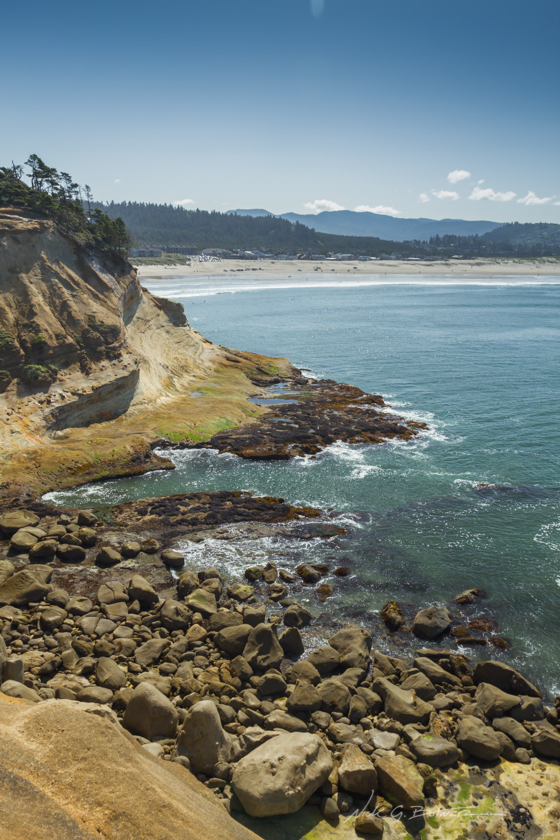 Looking back at the beach, you can see where the cars have parked on the shore’s edge. 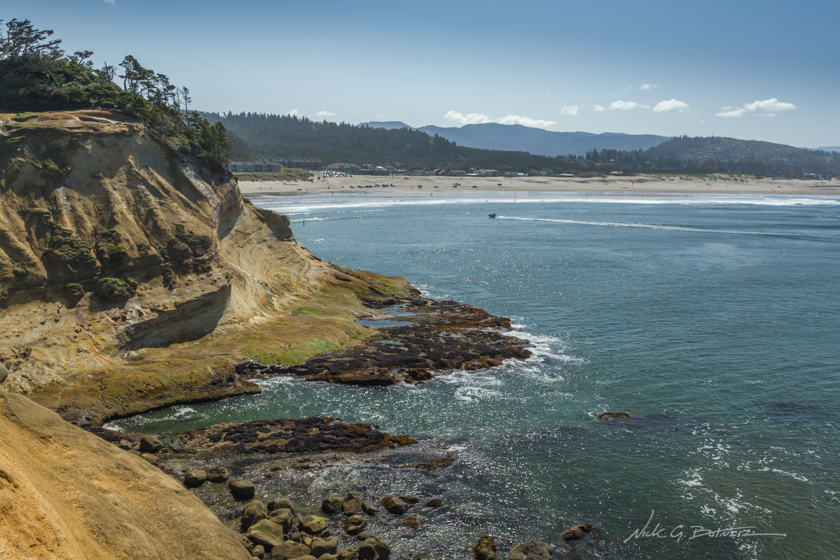 One of the Dorry Fleet heads into the shore. 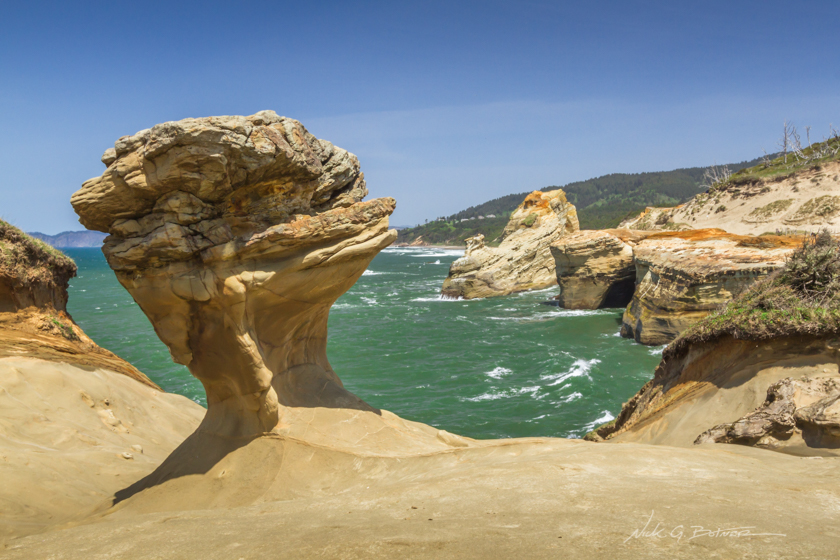 You might have seen this rock formation before. Looks like the bust of a smug man, facing camera right. 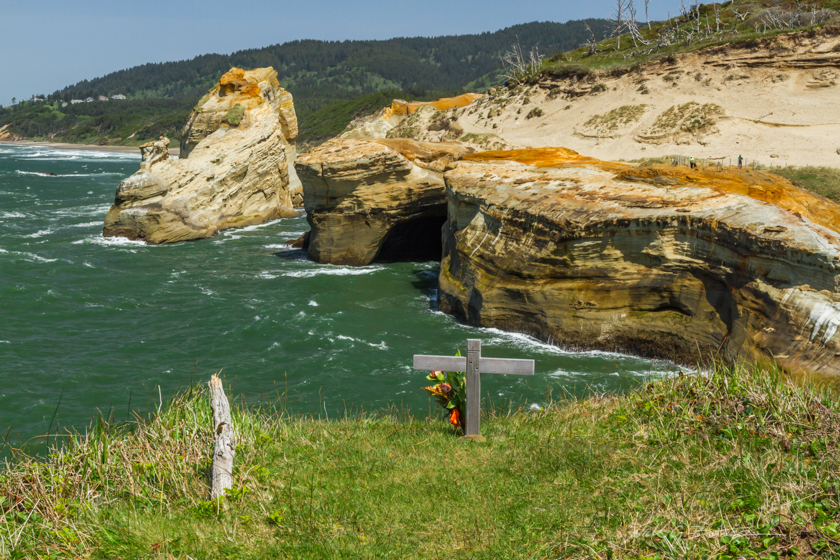 Memorial on the cliff’s edge. 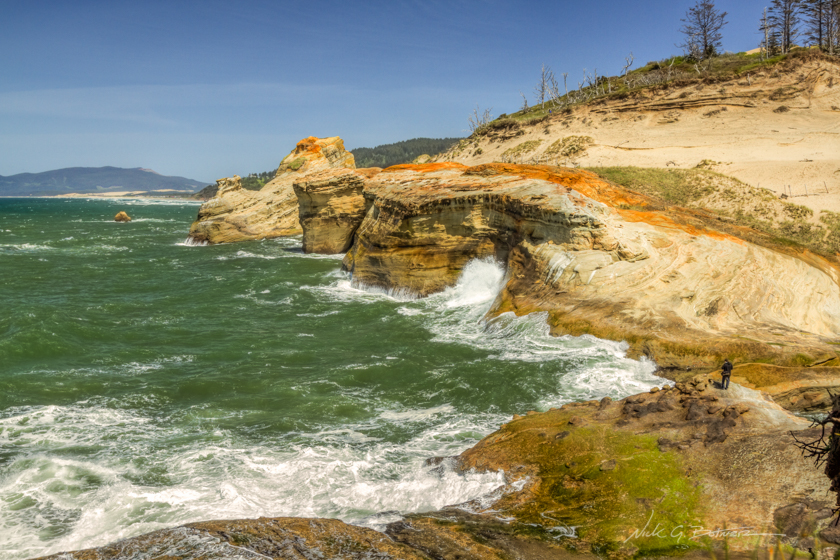 I wasn’t the only one out on the cape. If you look close you can see another photographer capturing the breaking waves. 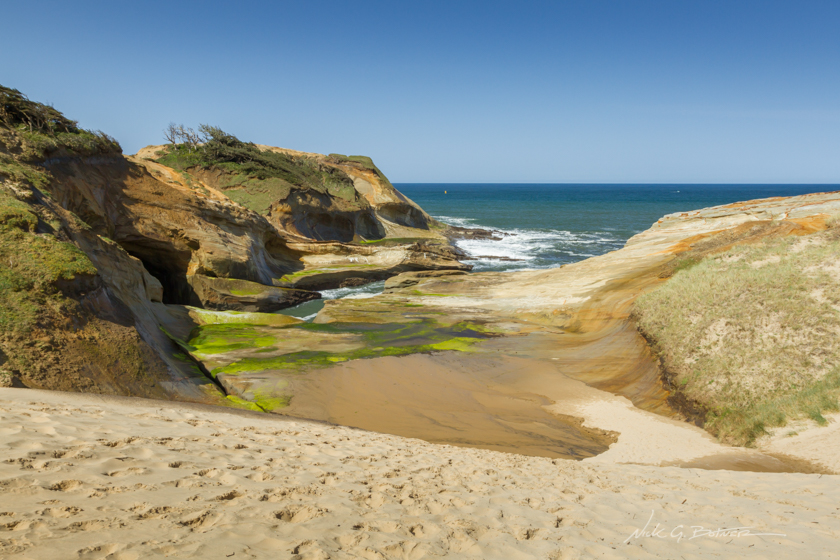 After you explore the cape, make your way along the shore’s edge towards the north. There is a little bit more to see. 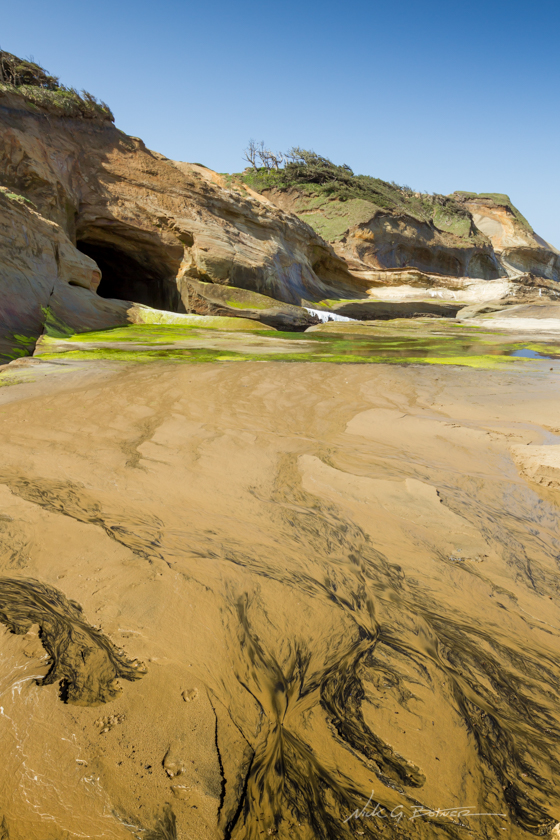 Low tide enabled me to make it out to some of the sea caves. 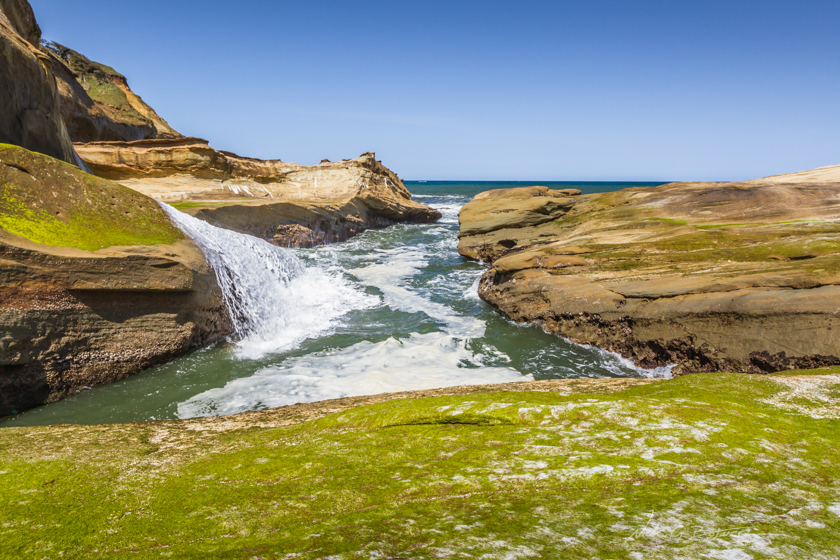 Normally, where I am standing, is under water. So it was a welcome chance to get some interesting wave action as they rolled into the sea caves. 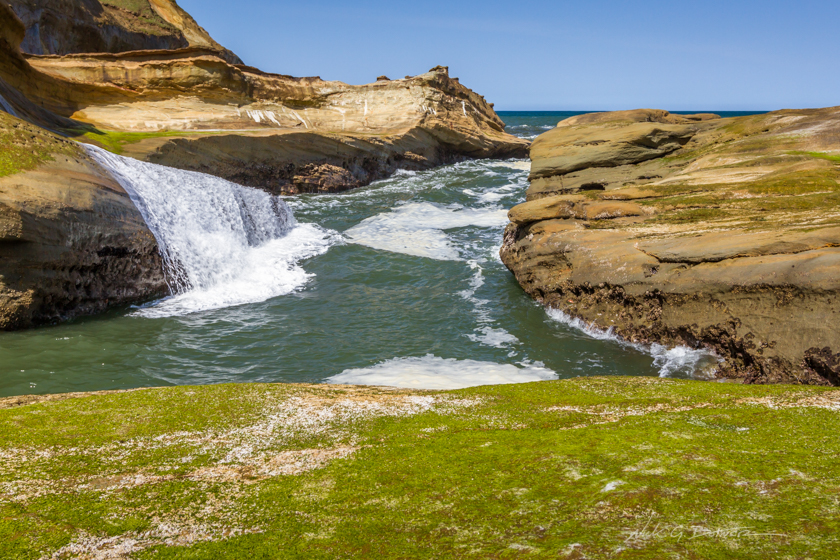 I spent a good while here waiting for the perfect wave/water action on the rocks. 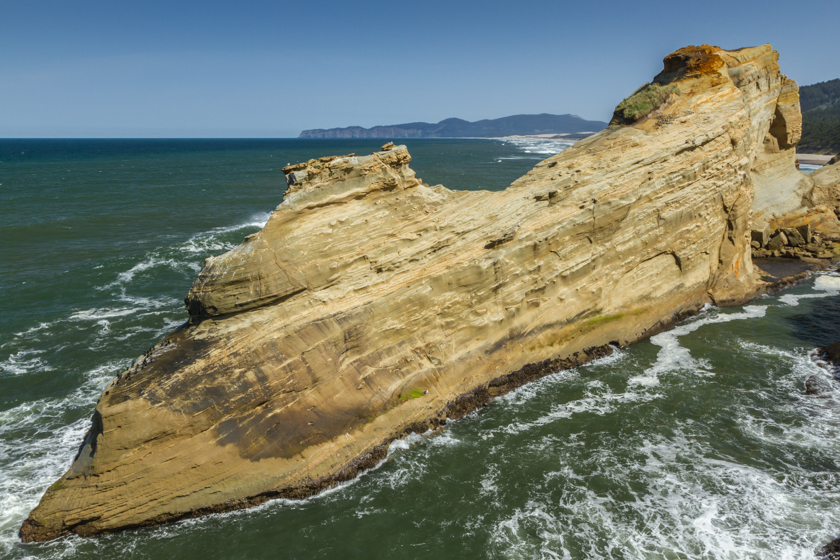 Further up the beach, one of the more impressive rock structures.

Looking back at Haystack rock. 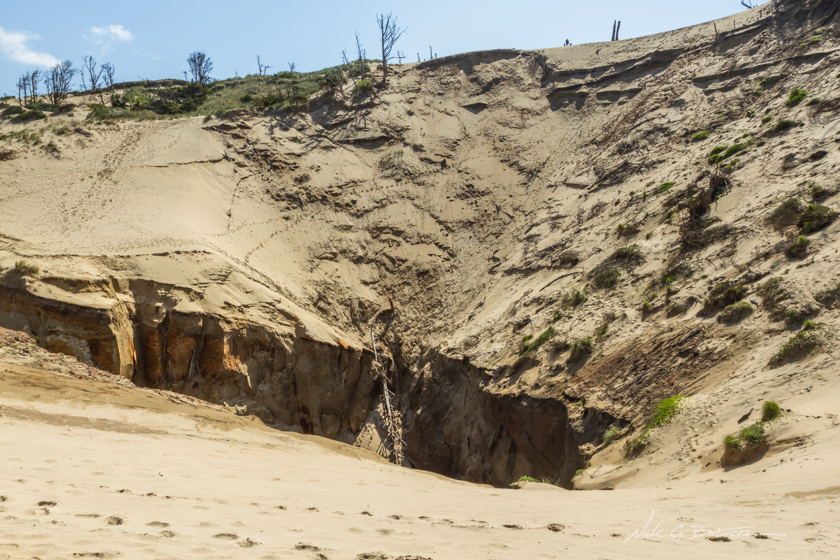 Finally, I have seen all there is to see along the coast. Now it’s time to check out the giant sand hill/mountain. The backside looks like the sand monster in Star Wars. 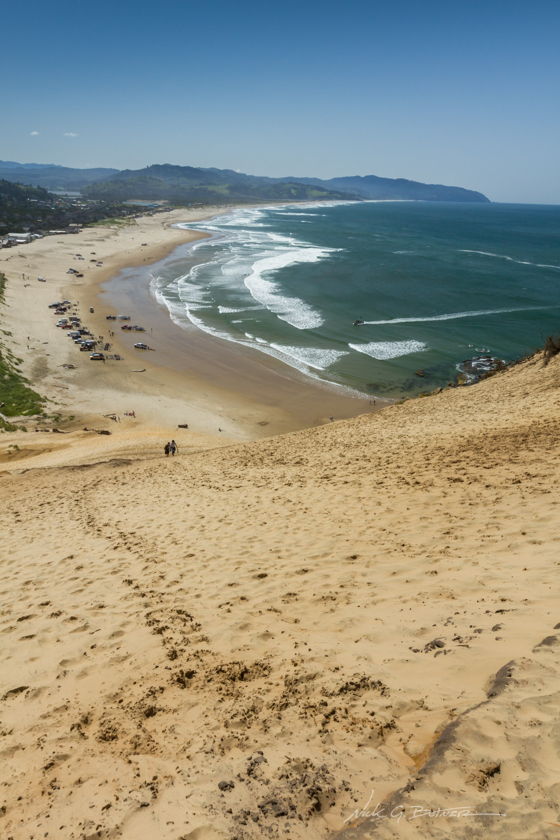 A view looking south from atop the sand hill.

Most people walk straight up the hill for the view and then run down. I recommend going along the coast, then the trip isn’t as steep and you get to see a bit more along the way. 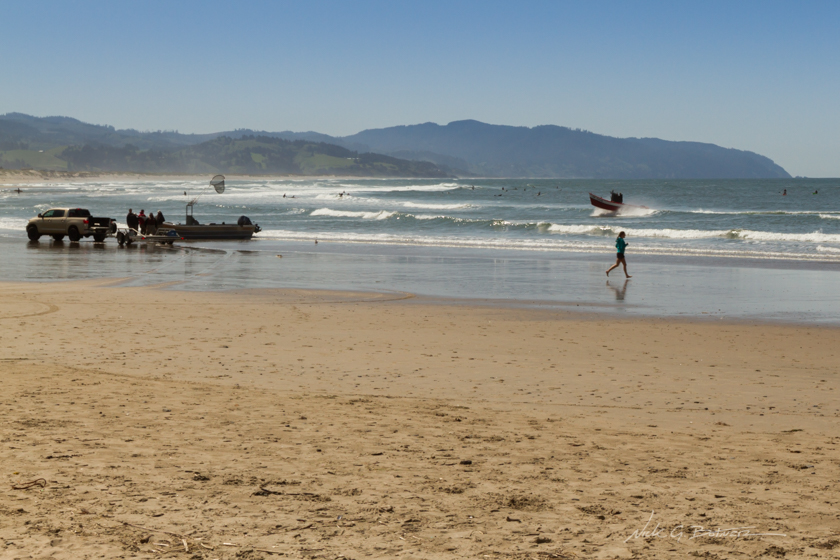 Another Dorry comes flying into shore. 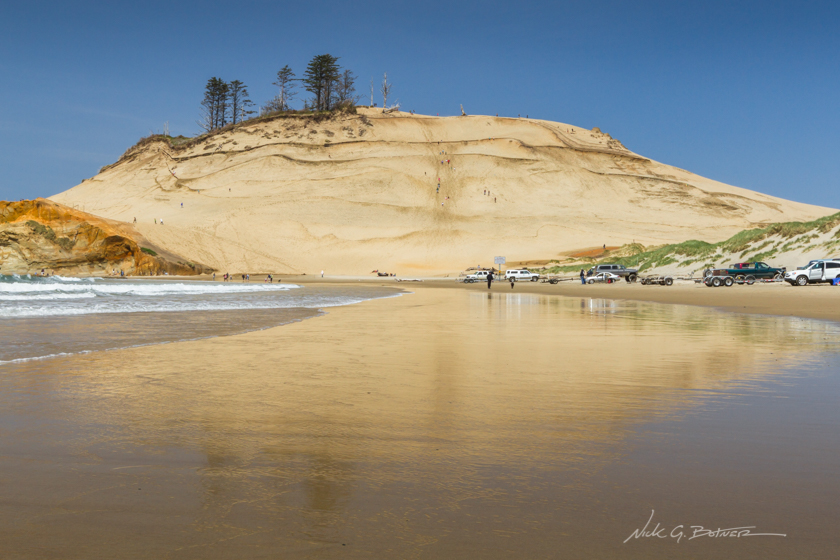 Finally, a shot of the giant sand hill. This gives you a better idea of what I was talking about.

So if you ever find yourself in Oregon and want to spend a day at the beach, along with a little bit of exploration, then I highly suggest you make a trip out to Cape Kiwanda. You won’t be disappointed. Unless you hate sand. In that case, why are you even at the beach!~ 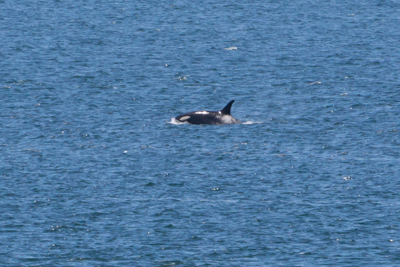