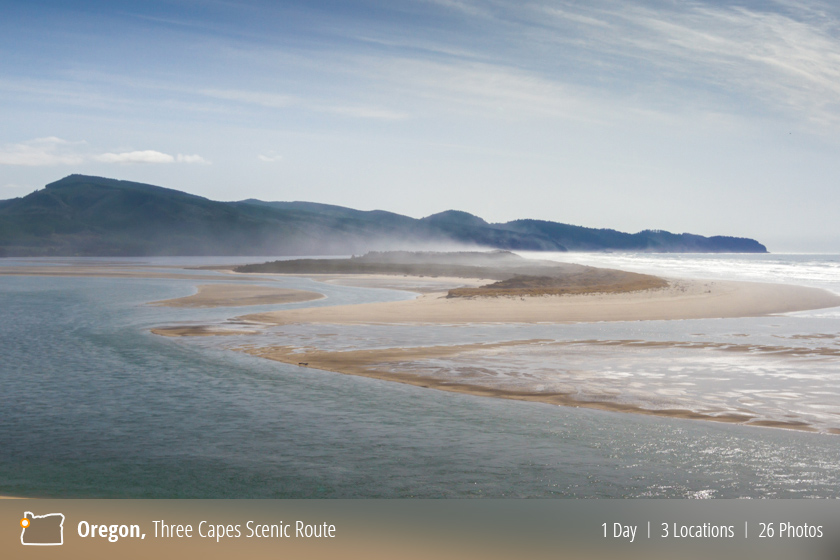 Touted as one of the best scenic drives along the Oregon coast, the Three Capes Scenic Route offers not only spectacular views from the road, but also stunning parks along the shores edge.

The route is comprised of (from north to south) Cape Meares, Cape Lookout and Cape Kiwanda. All three have their own distinct qualities about them. I will be doing my best to give a quick overview and show you some of the pictures from my trip. 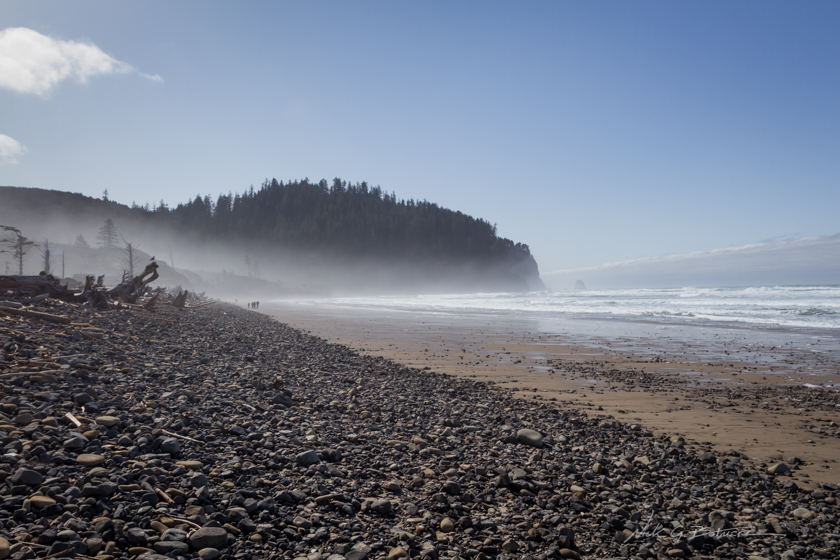 Starting from the north, the first stop on the list is Cape Meares. It’s a beautiful little town where you drive through some residential streets to gain access to the beach. 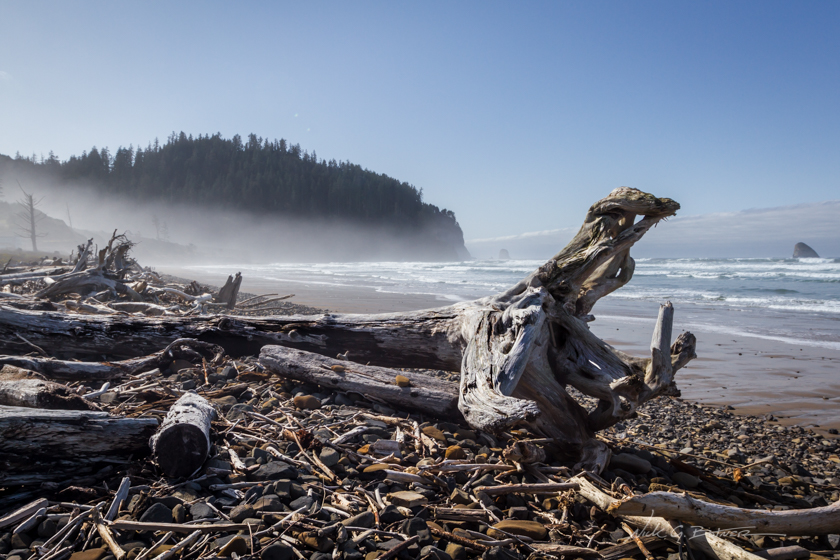 Once on the beach, large sun-bleached trees stack up along the bluff. 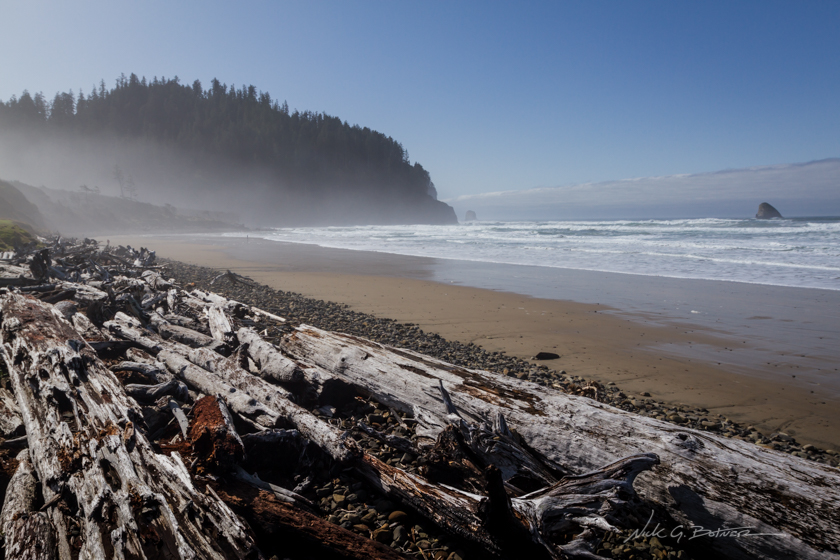 Aside from the charm of the local residents and the plethora of driftwood, Cape Meares is more of a recreational beach with surfing and walking your dog as the main attraction. 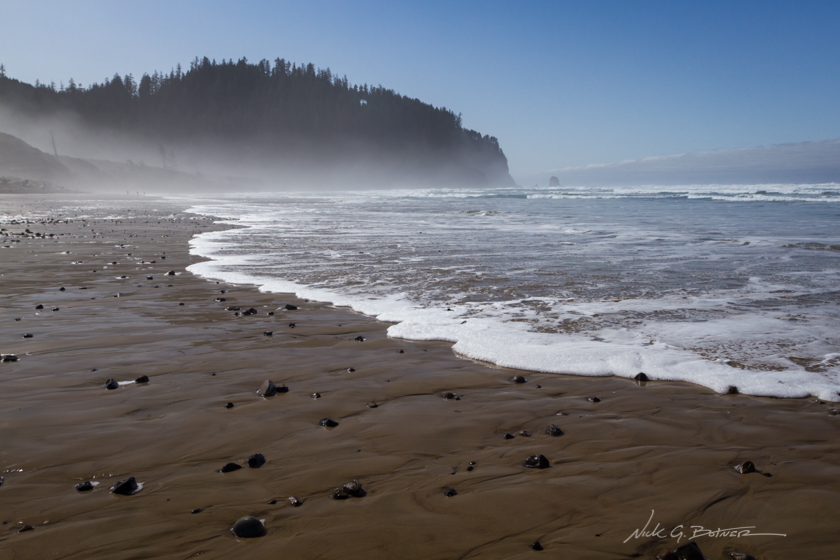 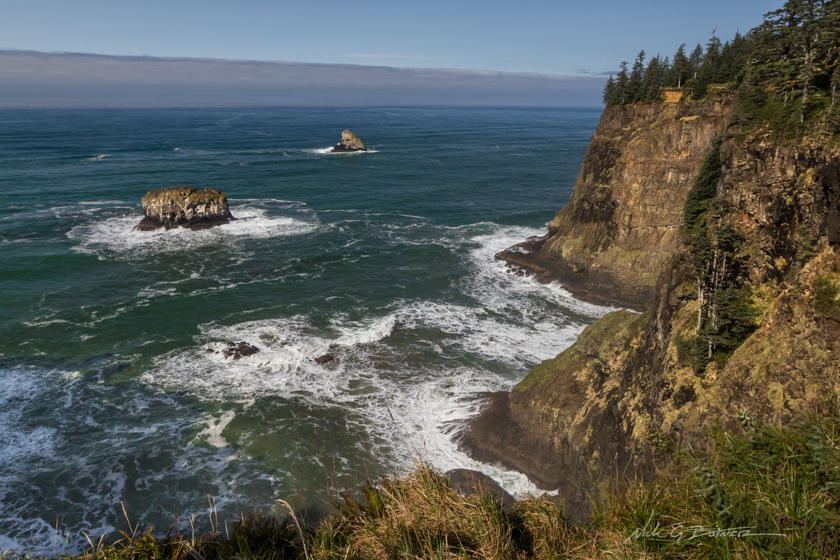 Back on the road and headed south, you can access Cape Meares State Park via the Lighthouse Drive. Unfortunately, the viewpoint is the same location as the lighthouse. Meaning, if you want a photo of a lighthouse in the background, you will need to do a little hiking to get the viewpoint you’re looking for. The viewpoint above is the first one as you enter the park, the lighthouse is further down. 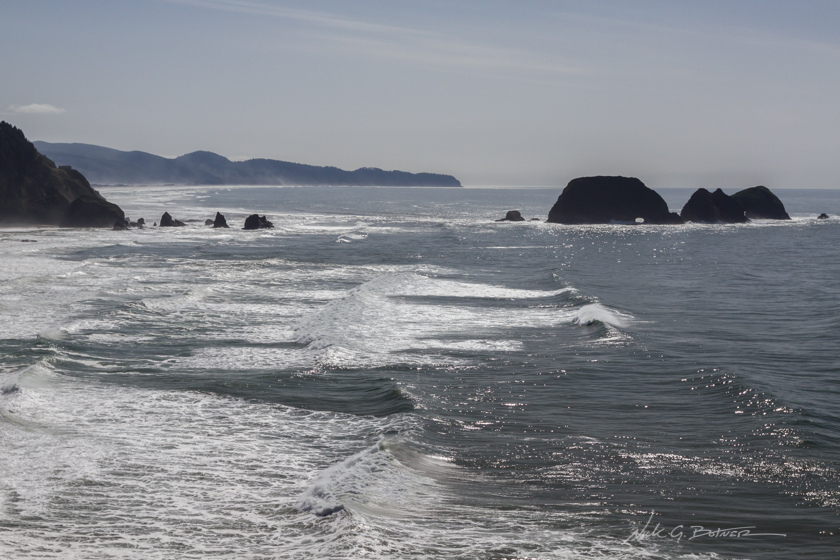 Looking south from the state park, you can see the Three Arch Rocks National Wildlife Refuge. 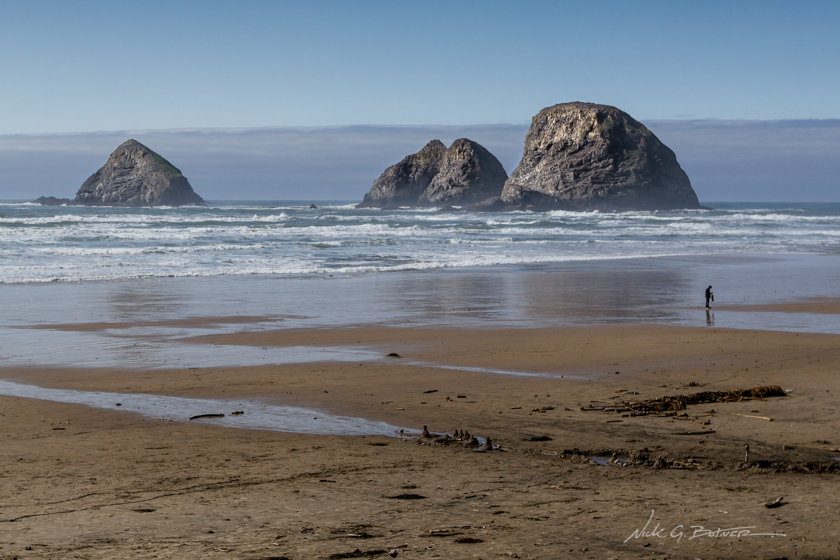 In order to get another look at the Three Arch Rocks, I had to get back in the car and drive a little further south. It’s not too far down, but there is a side road that leads to a parking lot with beach access.

Aside from the rocks, there wasn’t much else to see. So it was back in the car and onward with the scenic route. 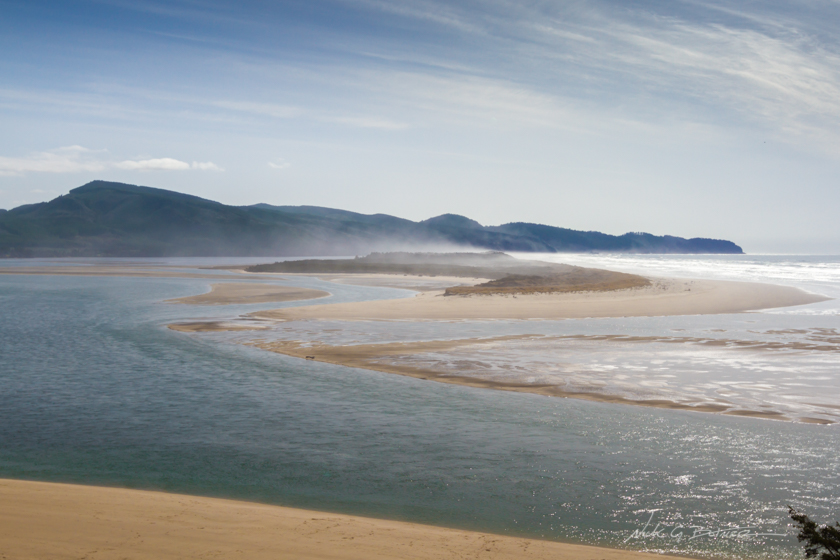 As the road heads south, towards Netarts Bay, you are given a brief window into the pass and tidal flats.

On my trip, there was a really nice man parked at this spot painting the vista with watercolors. We chatted for a little while and he showed me his other watercolors. Before leaving he also pointed out the pair of seals bathing on the shore’s edge. I almost missed them. Can you see them in the shot? 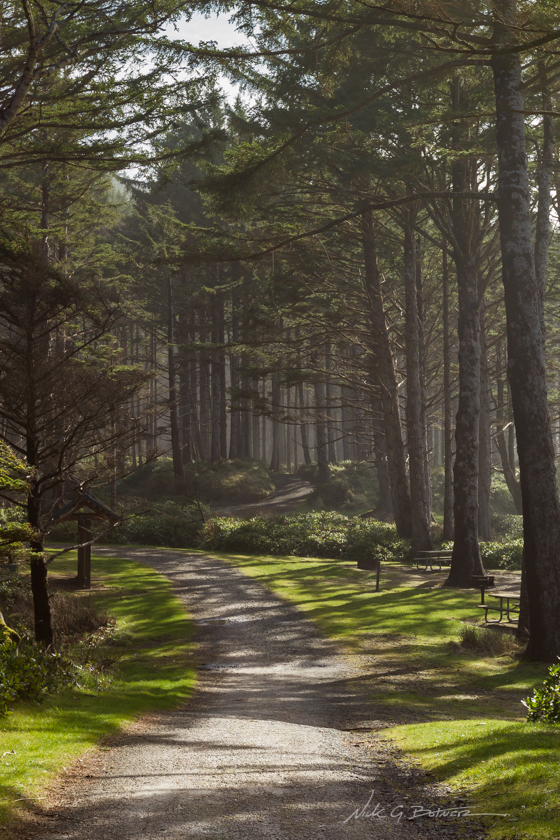 After making my way around Netarts Bay, I came up to Cape Lookout State Park. It’s pretty easy access with the parking lot close to the beach and wide graveled trails leading towards the cape. 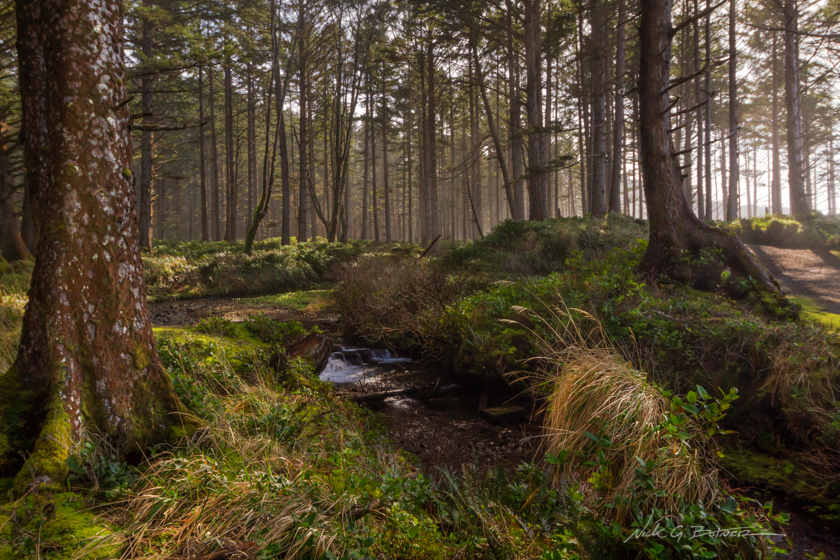 Before heading down to the beach, I wanted  to check out a little bit of the trail. The shot above is my feeble attempt at capturing the bubbling brooke that runs through the forest. 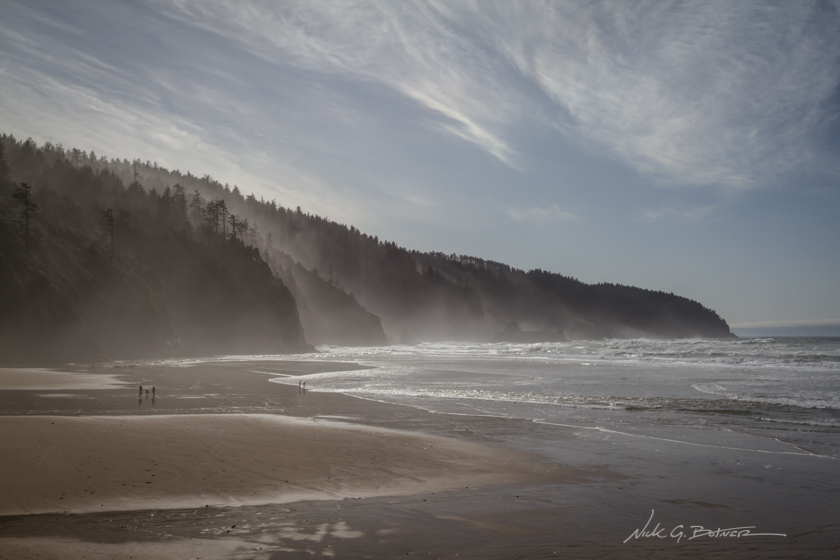 Quickly stepping out to the beach, you can see Cape Lookout in the immediate background. 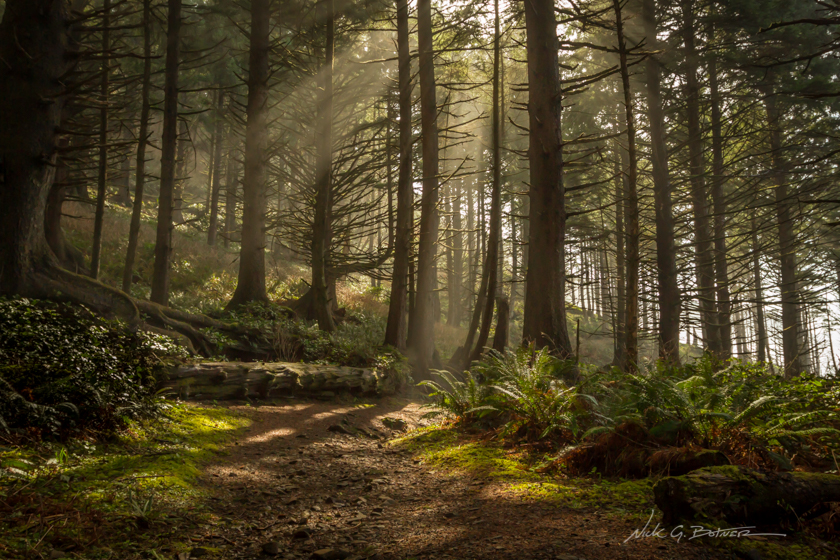 Wanting to explore more of the cape, I headed back to the forest and continued along the coastal trail. 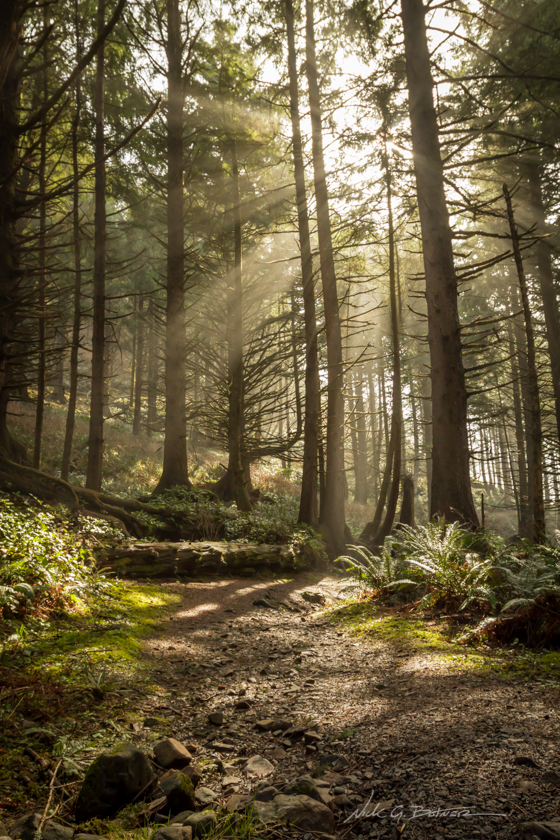 In combination with the large waves, the strong winds were pushing the sea spray into the forest. Every now and then you could see some rays of sunlight illuminating the salty mist. 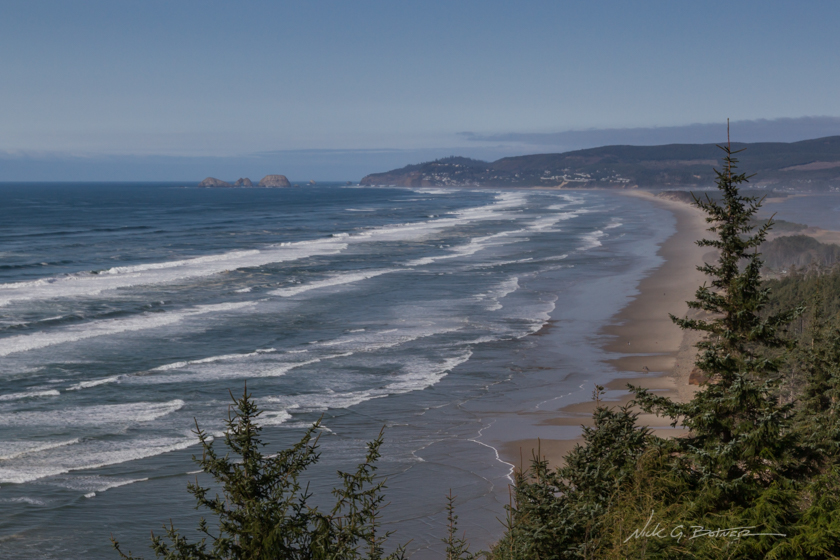 As you hike along the trail, there are a couple points where you get a view of the ocean and Three Arch Rock.

Previously, when I was talking to the watercolor man, he showed me one of his paintings of Three Arch Rock. He asked me if I could make out what the rocks looked like. I felt bad, but from his watercolor I couldn’t tell. I gave up without any guesses, and he excitedly explained they resemble two turtles kissing.

Now that I am at the lookout, I can totally see what he meant. Thanks watercolor man! 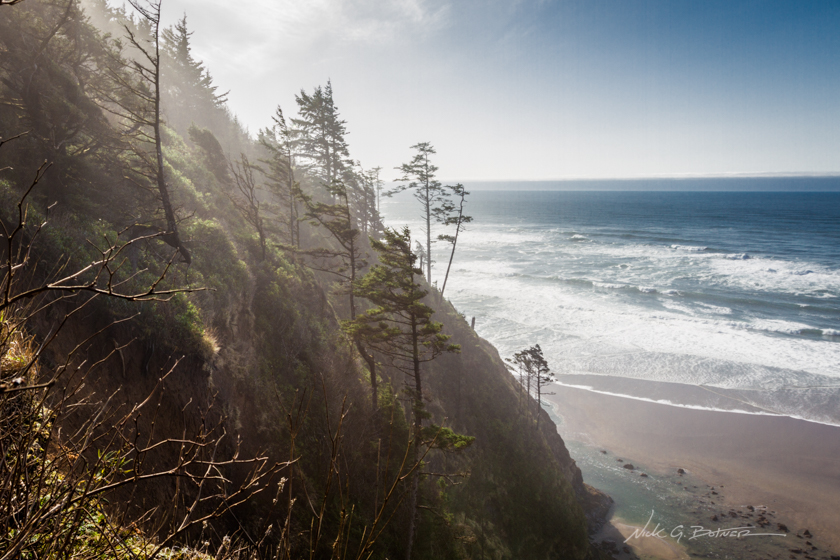 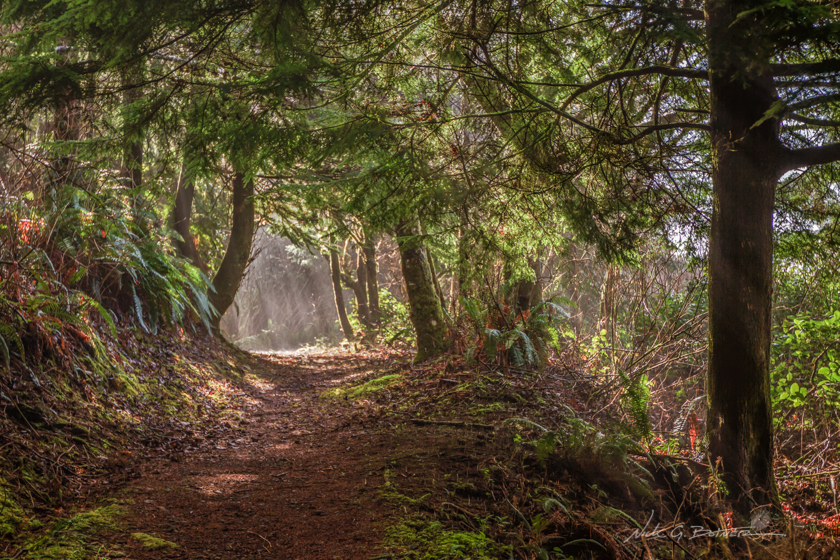 Back on the trail and headed further south. 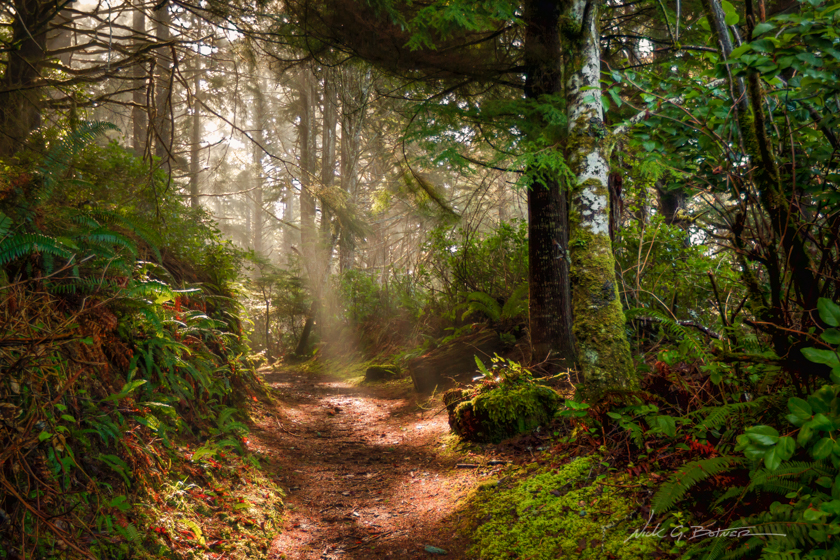 This has been my desktop background for over a year now. I can’t get over the way the sun breaks through the trees. 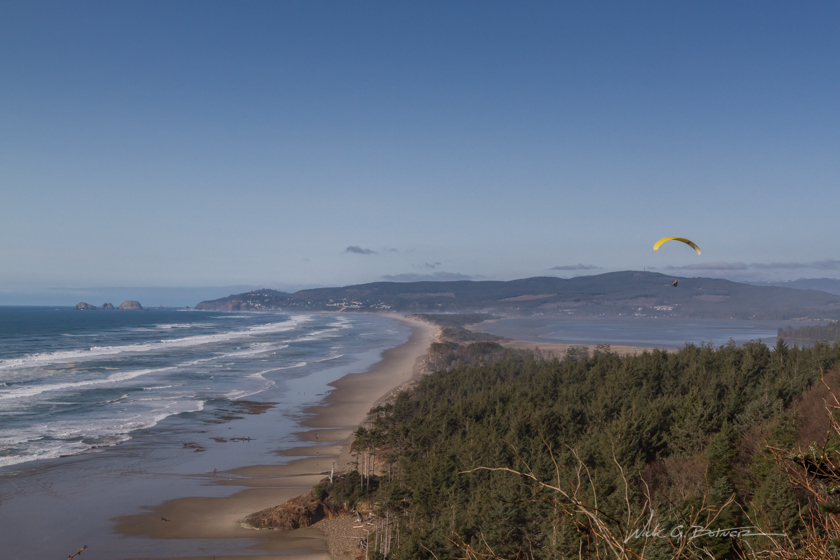 Walking ever further down the cape, there was one last lookout before the trail headed back into the forest. While I sat there trying to capture the view, this motorized paraglider zoomed overhead. Turns out just a little further up the road is a pull off where people, like the one above, launch their motorized paragliders. 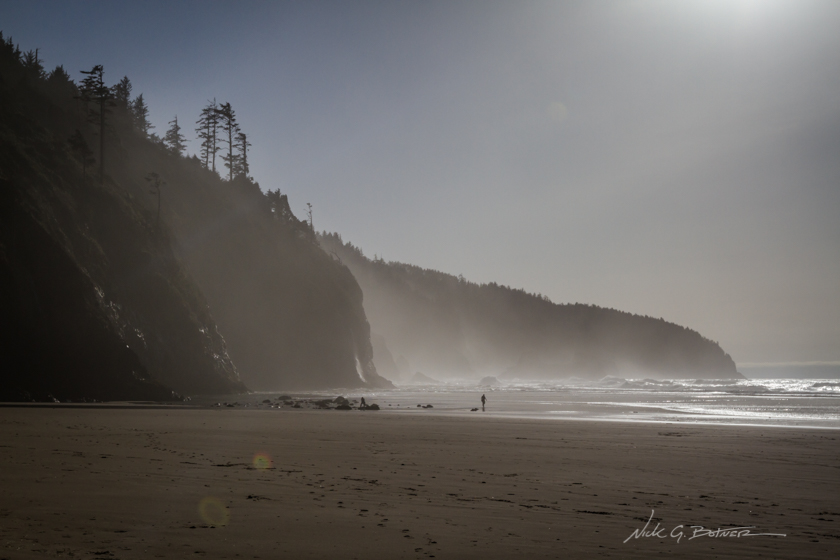 Having seen all I wanted, I headed back to the beach for the final stretch towards the car. 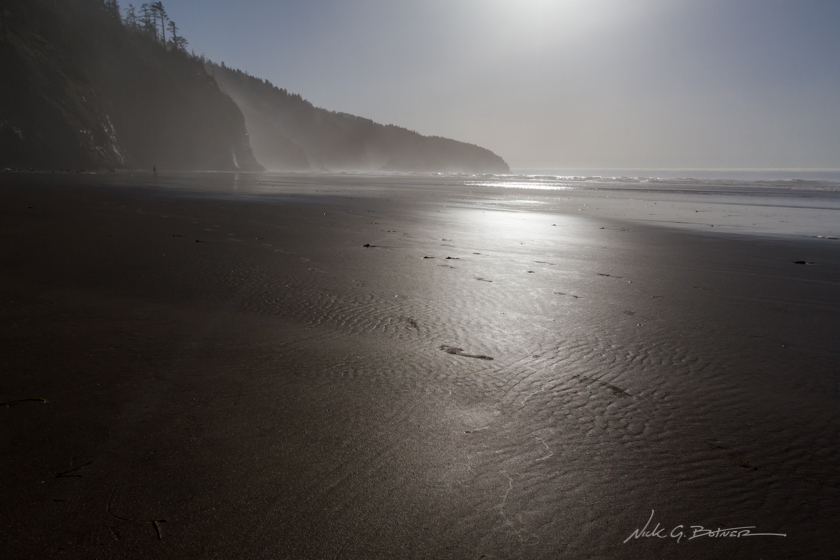 Here’s my attempt at being dramatic with lighting and footsteps in the sand. 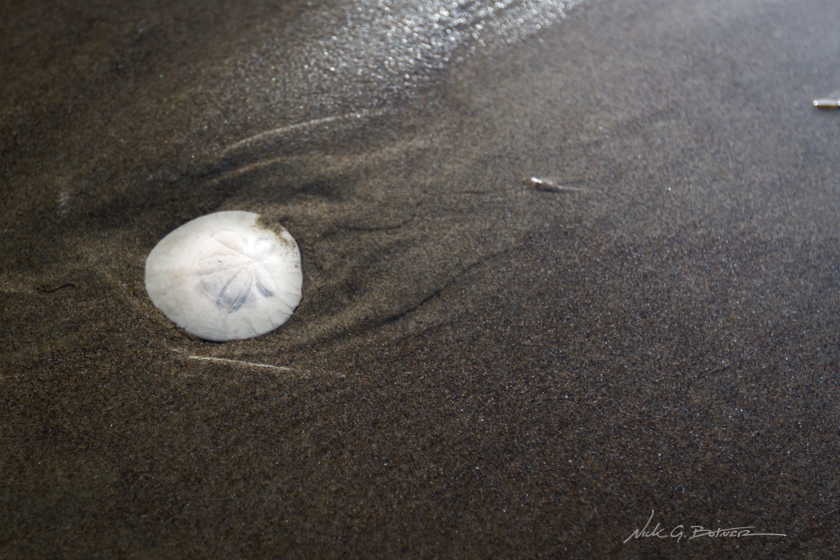 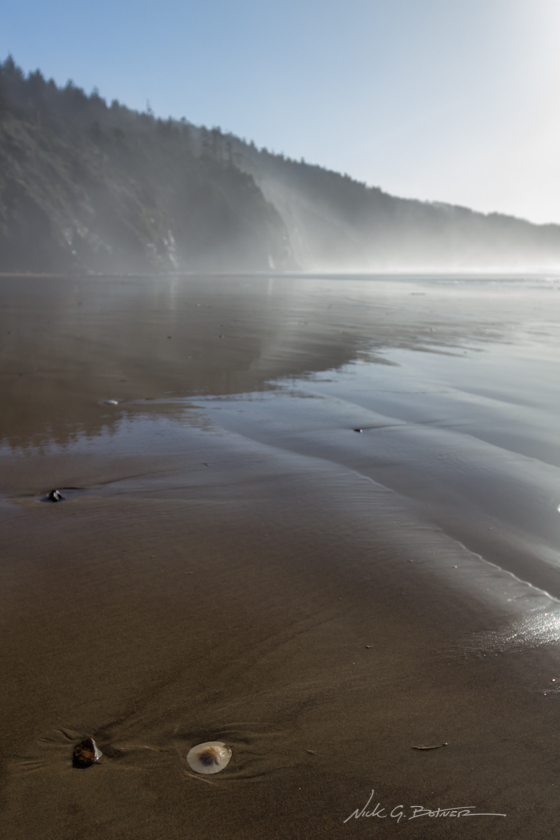 One last look at Cape Lookout before heading back to the parking lot. 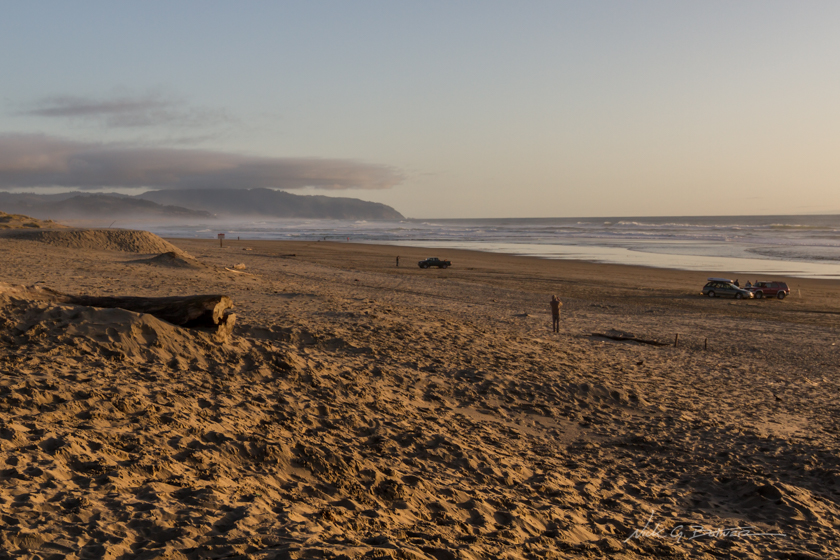 With the day quickly coming to a close, I was able to make it down to Cape Kiwanda just in time for sunset. 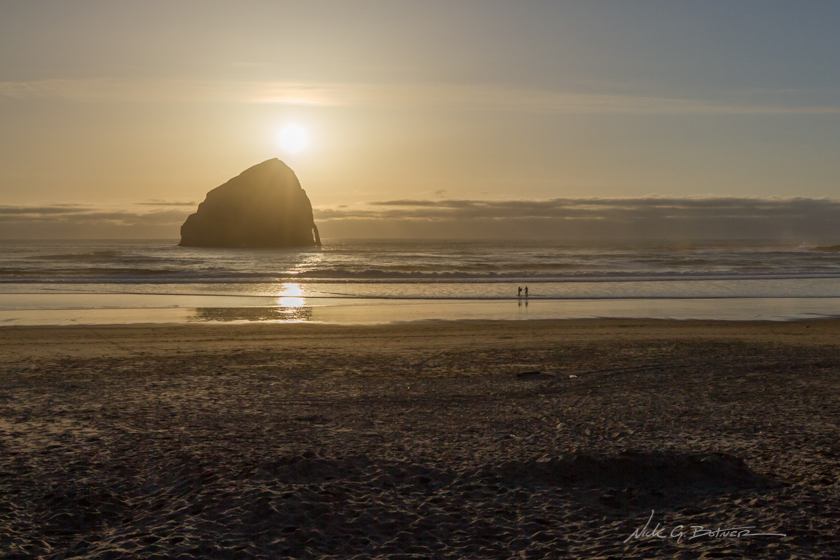 While there was no time to explore the actual cape, I did get to sit back, relax, and enjoy the beautiful sunset over haystack rock. 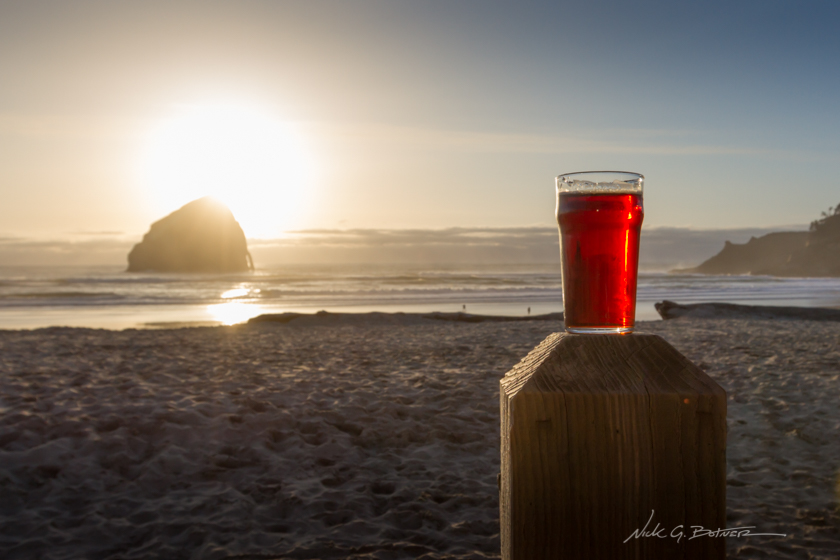 Which also included enjoying a lovely craft beer from the Pelican Pub and Brewery! 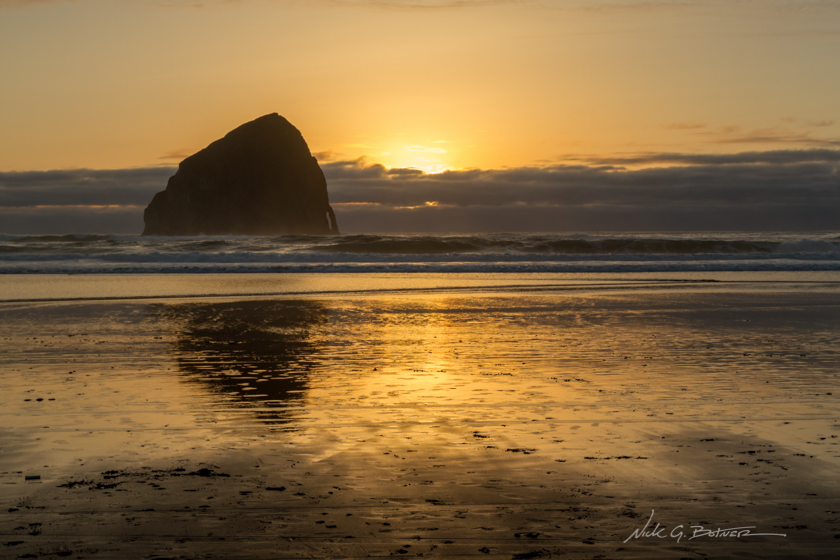 Final moments before slipping into darkness.

Having spent the entire day traveling along the Three Capes Scenic Route, I would have to say I wish I had spent a little more time at Cape Kiwanda. Not to say that Cape Lookout wasn’t a great experience, but now that I know the route, I would adjust my time a little better.

If I were to do this again, I would use Cape Meares as an introduction. Then hit the lookout at Netarts Bay. Followed up by a walk on the trail at Cape Lookout so I could see the Three Arch Rock. And then head down to Cape Kiwanda and explore along the dunes and rocky coastline.

Here is a map of the route along with the highlights and the return path incase you didn’t want to go back along the coast. 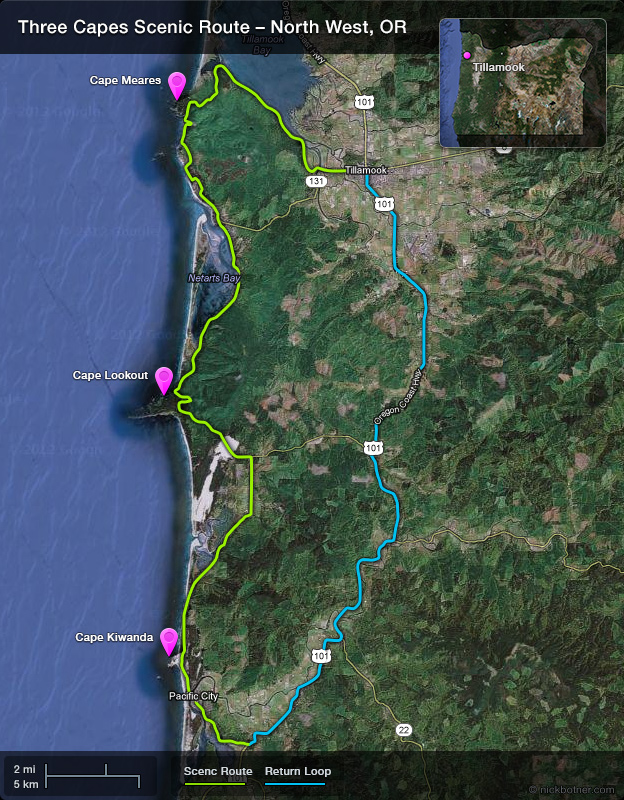 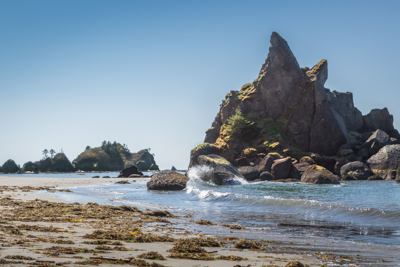