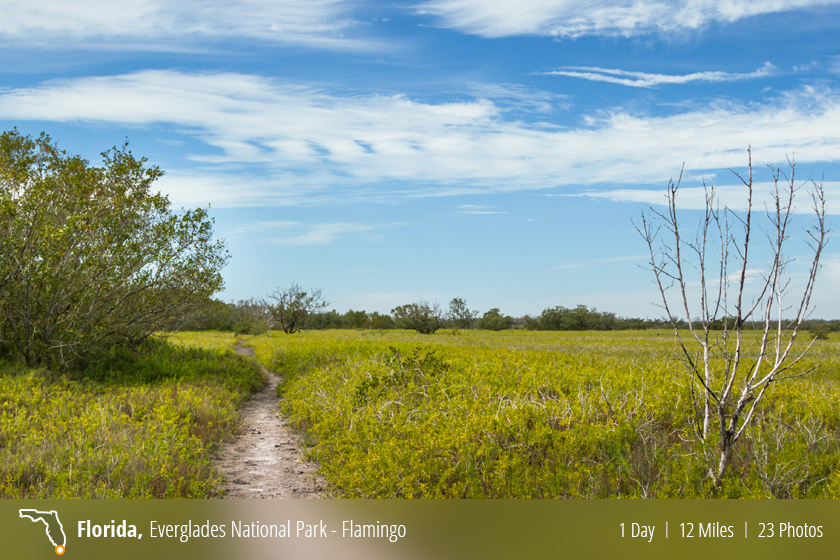 One Thanksgiving, when I was visiting my family in South East Florida, I decided I would make a side trip and head down to Flamingo in the Everglades National Park. The last time I had been to the park was when I was a small child. So knowing I would be moving to the Pacific Northwest soon, I wanted to check things out one last time while it was still convenient.

I didn’t really plan on the drive from the entrance of the park to the trailhead in Flamingo to take as long as it did. Speed limits on the road are slow and there are ample rangers patrolling it. But that didn’t really matter. The weather was amazing and the views were stunning.

After a little over an hours drive through the park I finally got to the trailhead. Looking at the maps the ranger gave me. It would be roughly six miles out to the turn around point. Which means a 12 mile hike that I would need to complete in four or five hours. Seemed doable. 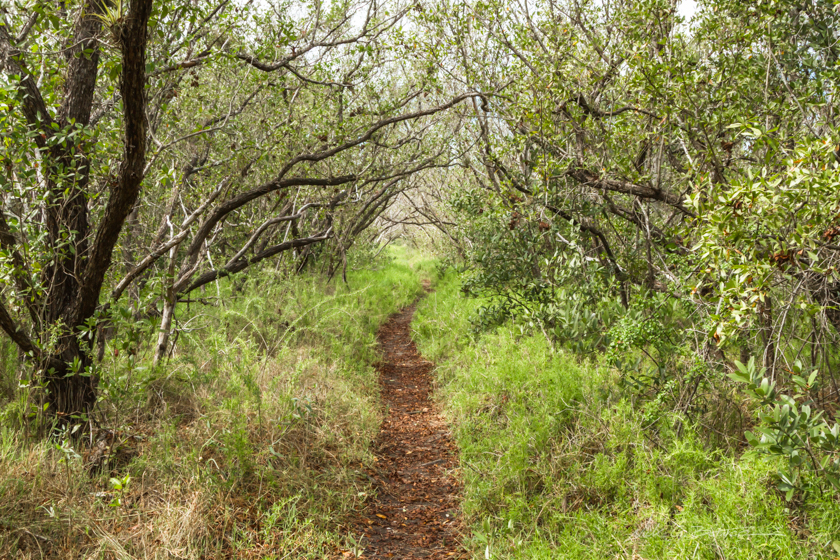 The trail starts out close to the water’s edge with mangroves over arching the path. 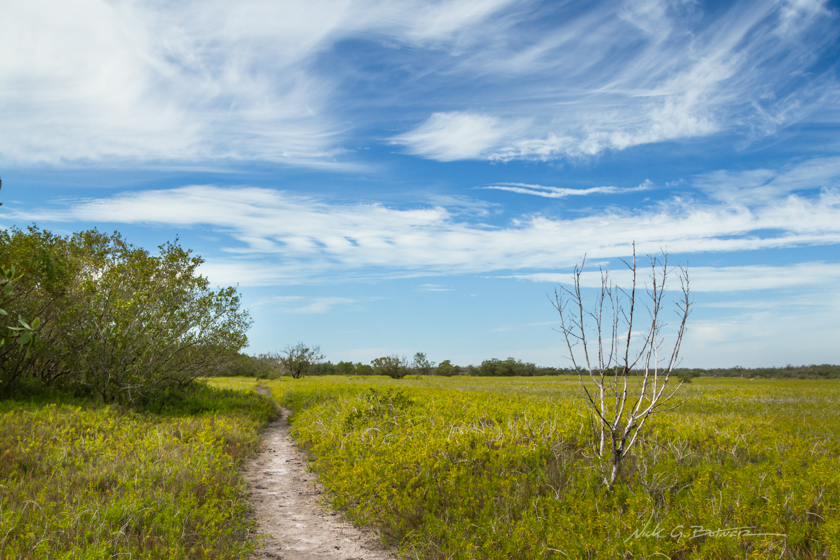 However the path starts to break away from the water and you are now in a prairie of sorts. 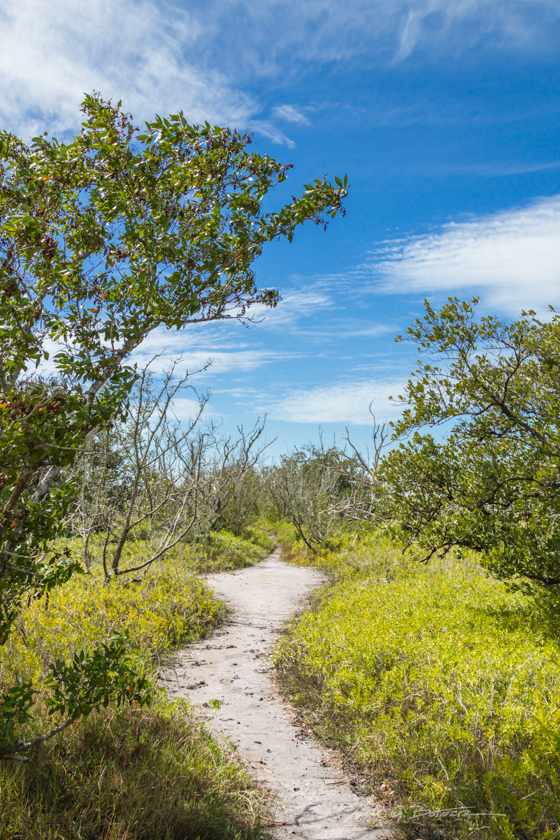 Seeing as how this was the dry season, most of the trail was dry as a bone. You could tell from the cracked mud that parts of the trail, like the photo above, would definitely be slightly submerged. 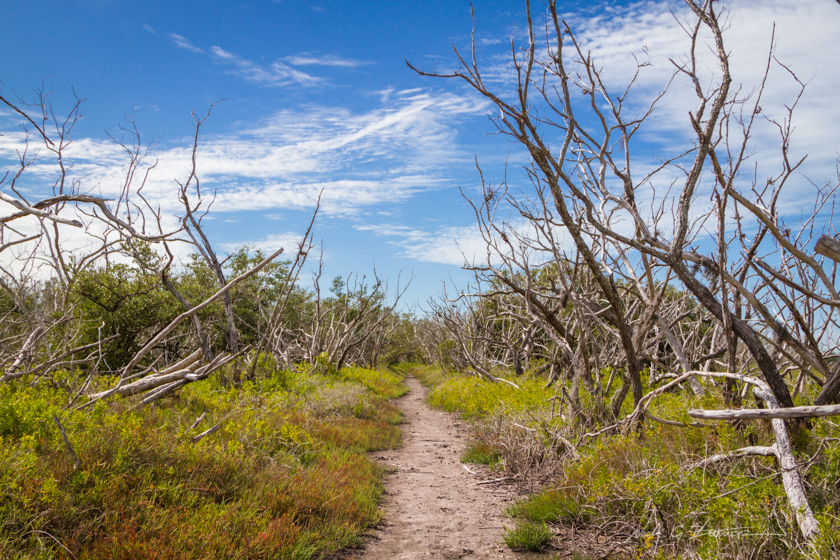 I don’t know why, but I always enjoy seeing a forest of dead mangroves. I know it’s not good, but it makes for good photos. At least I tend to think so. 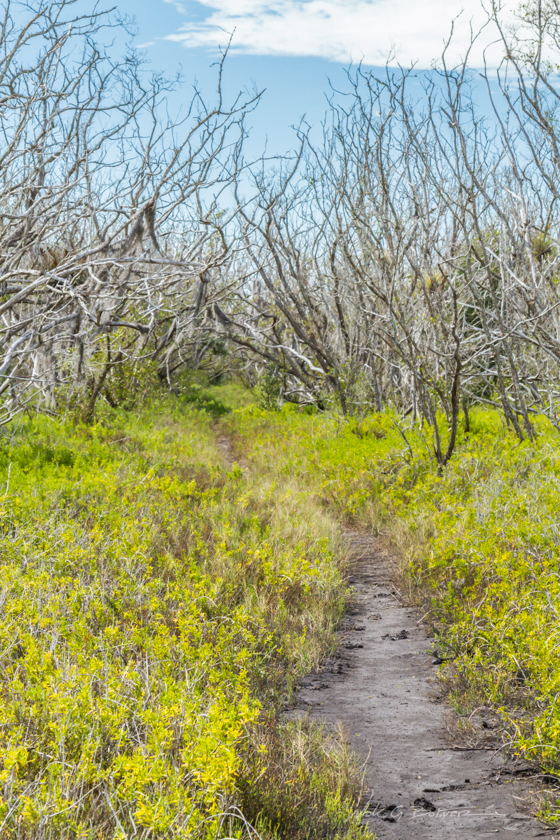 Into the dead forest we go. 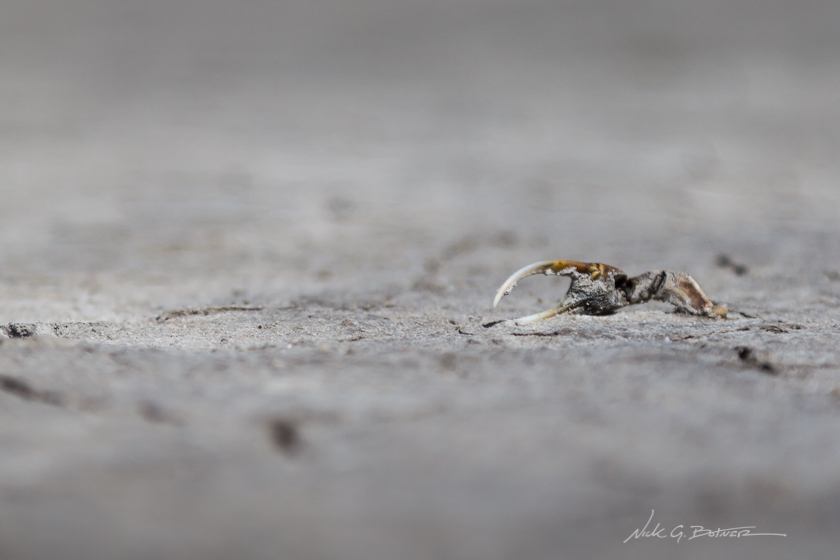 Along the trail there were tons of fiddler crabs. Of course they always ran away before I can get a good photo. So I have to settle for their dismembered body parts. 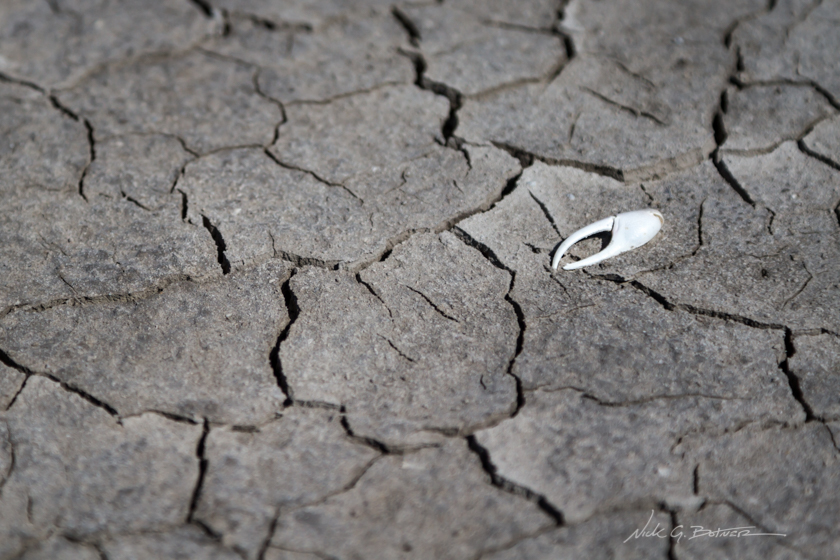 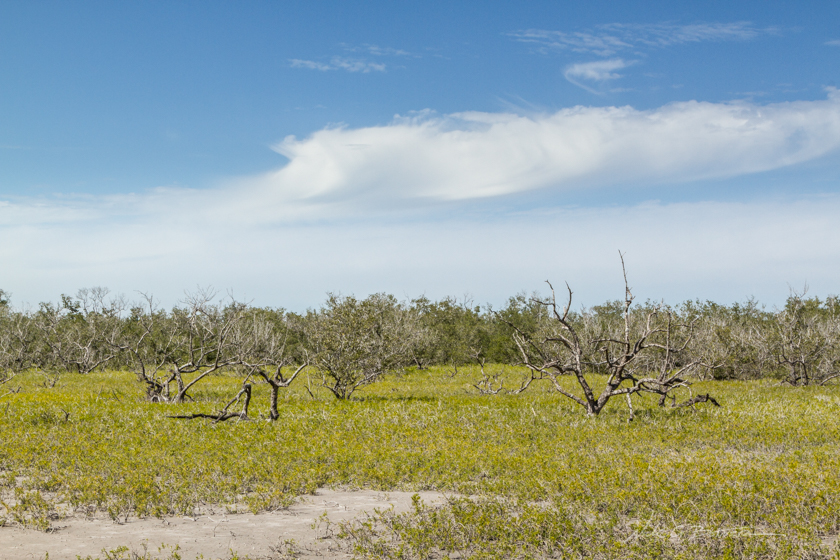 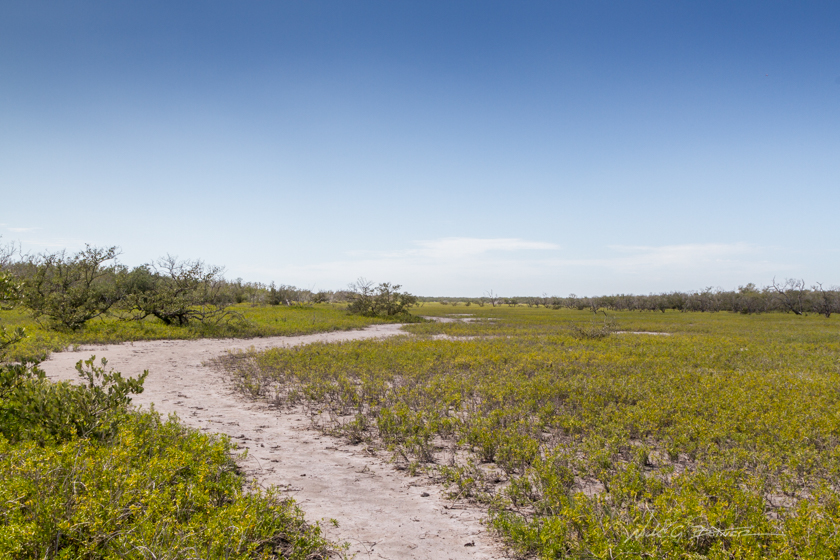 Getting closer to the end, the trail really breaks out of the mangroves. Views like the one above were common for the next couple miles. 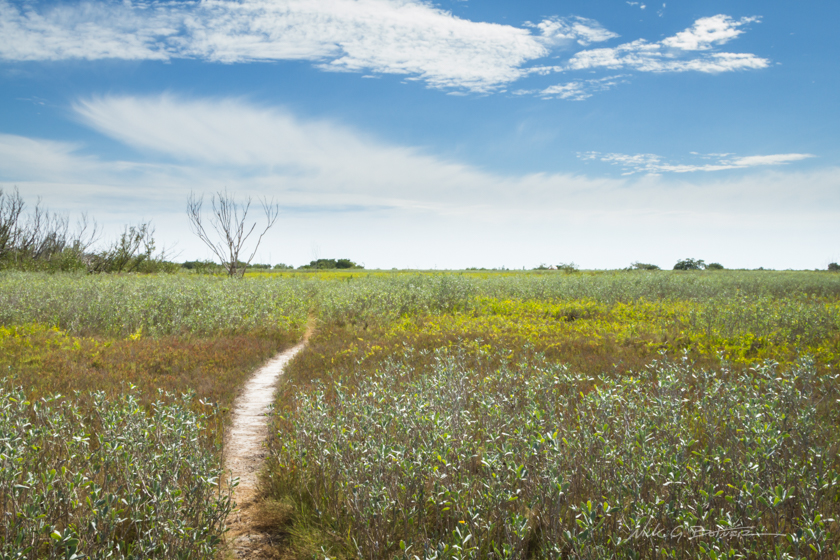 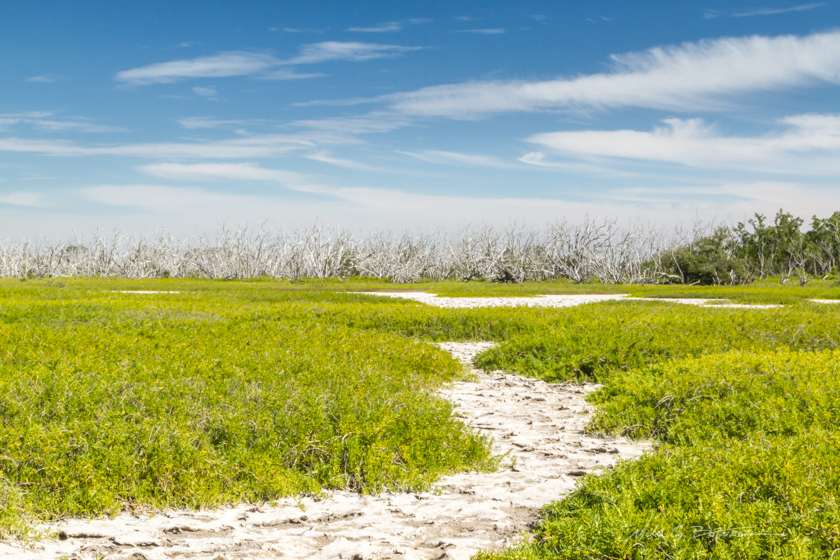 Looking south, you can see more of a dead mangrove forest. 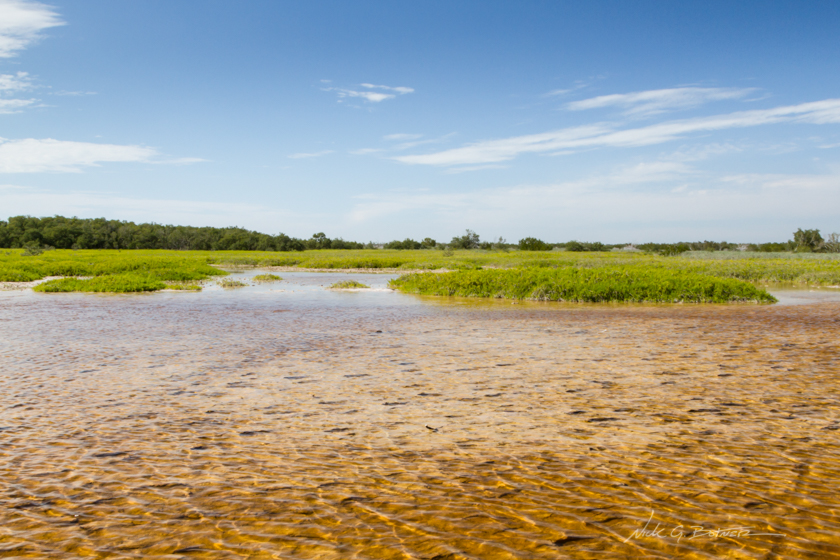 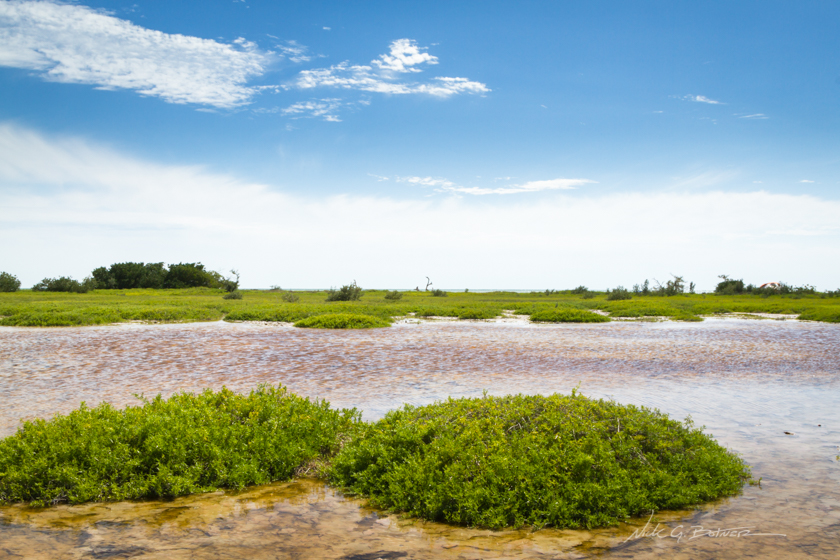 That mud was looking like it could be deep. So I took off the socks and shoes and rolled up the pants as far as I could. 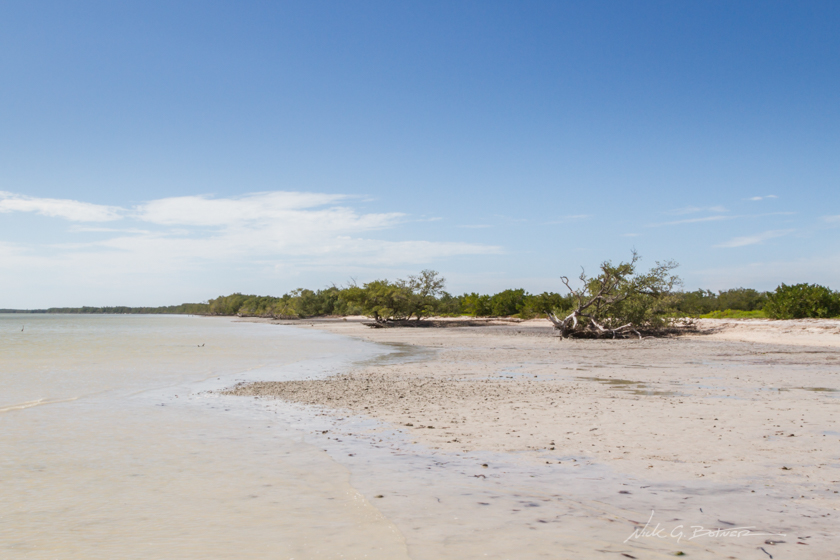 Out on the shore, it was low low tide. And the beach was rather muddy to be walking on. 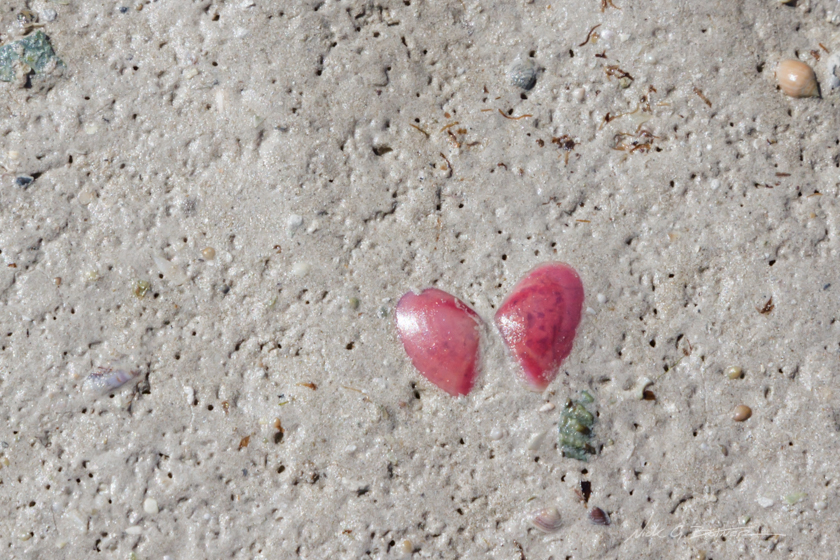 This pink coquina caught my eye. You can also tell how porous the mud/sand is with all these little holes. 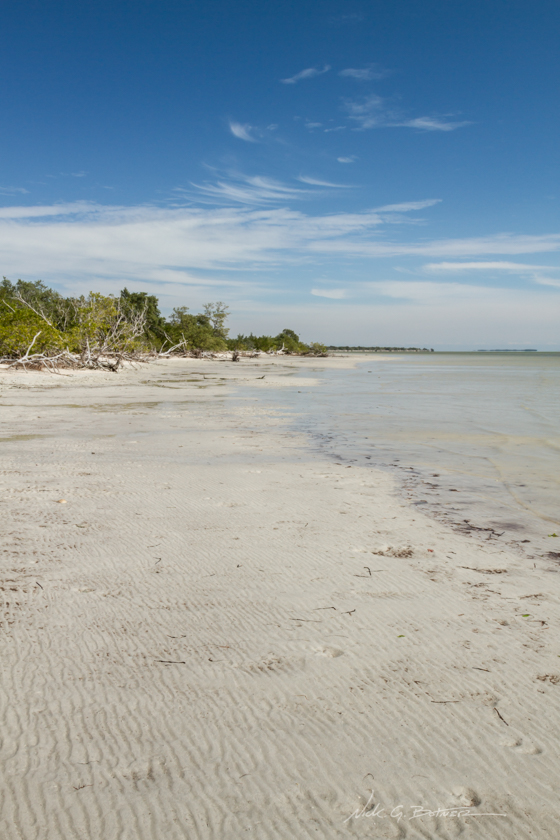 Looking south, down to Flamingo. I traveled about 300 yards more before deciding to turn around. 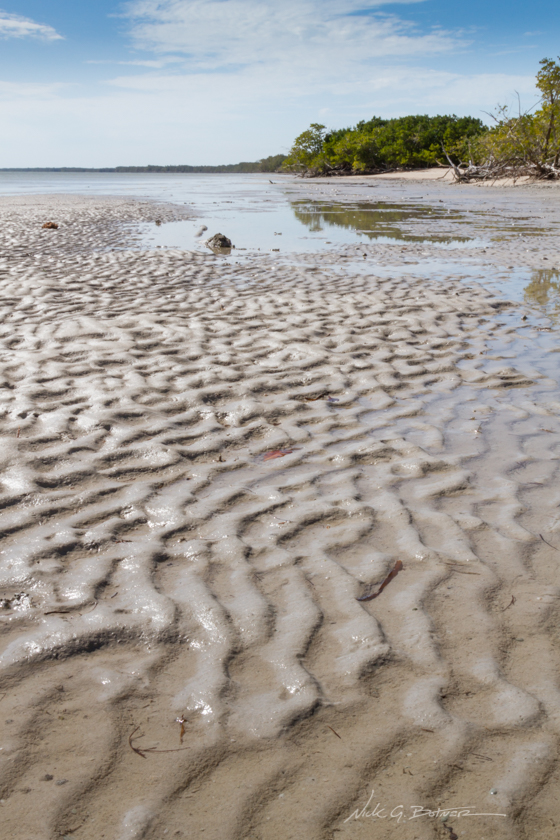 Looking north, I tried to capture the textures of the mud.

The slope on the beach was so gradual that you could quite possibly walk out into the gulf for a long time. However, being barefoot was dangerous in these conditions. The mud is too soft and easily hides sharp rocks and shells. If one isn’t careful, they will end up with a nasty laceration on their foot. And no one wants to hike six miles with a bleeding foot. 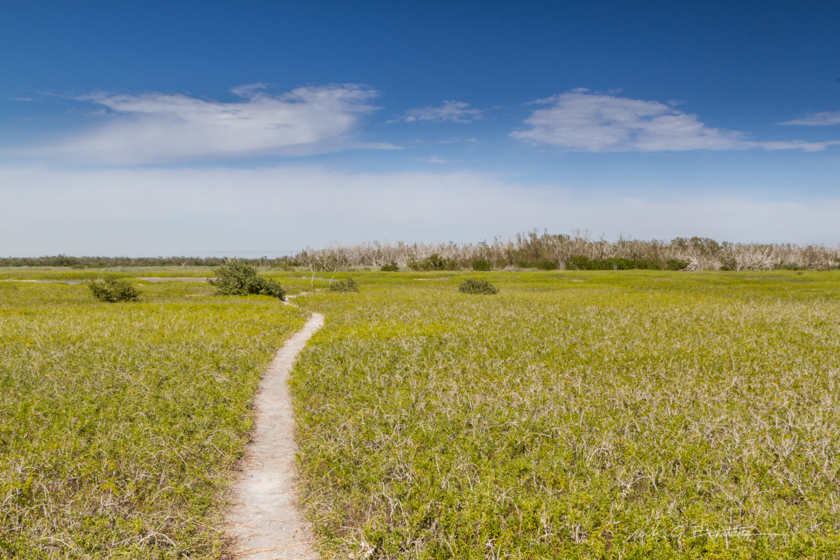 Looking at the time, I knew I needed to head back. So I forged my way back over the salt river and found my shoes and socks.

I was a little later than I wanted to be, so I ended up jogging half of the distance back. At one point I became a bit tired and too distracted that a tree root caught my foot and I went flying down the trail. Somehow I landed on my side and managed to avoid injuring myself. Well other than my pride.

Back near the trailhead there is an old boat, or what remains of it. And by the looks of it, it’s been there for quite some time. I don’t typically take photos of junk, but these came out kind of interesting when I applied some post production to them in an effort to make them look even older. 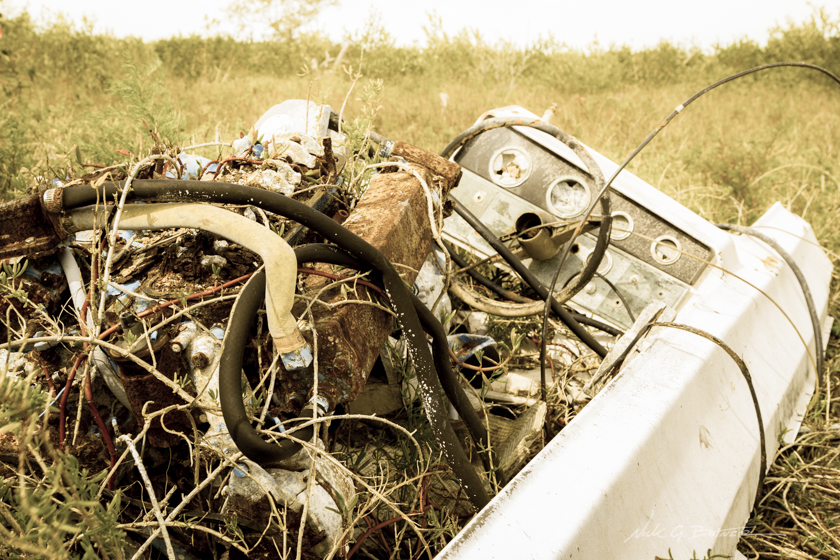 All that’s left is an engine and a steering wheel still attached to a partial helm. 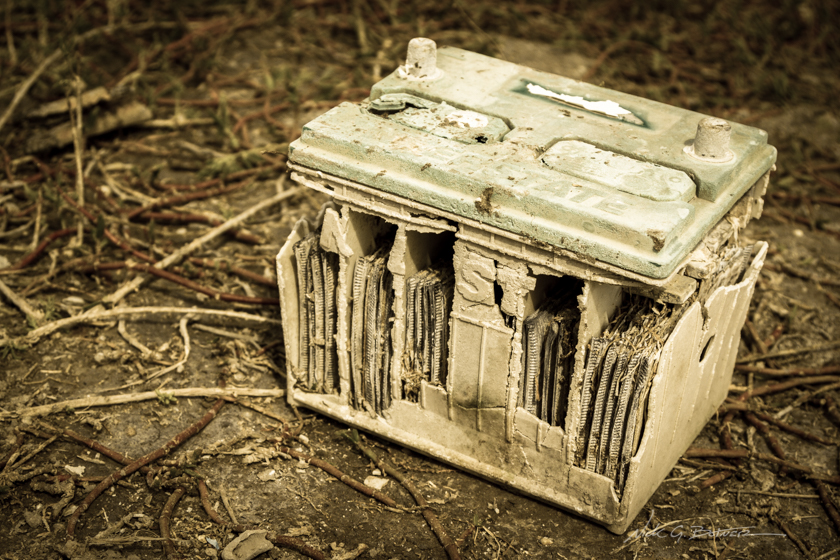 A corrosive battery was still kicking around as well. 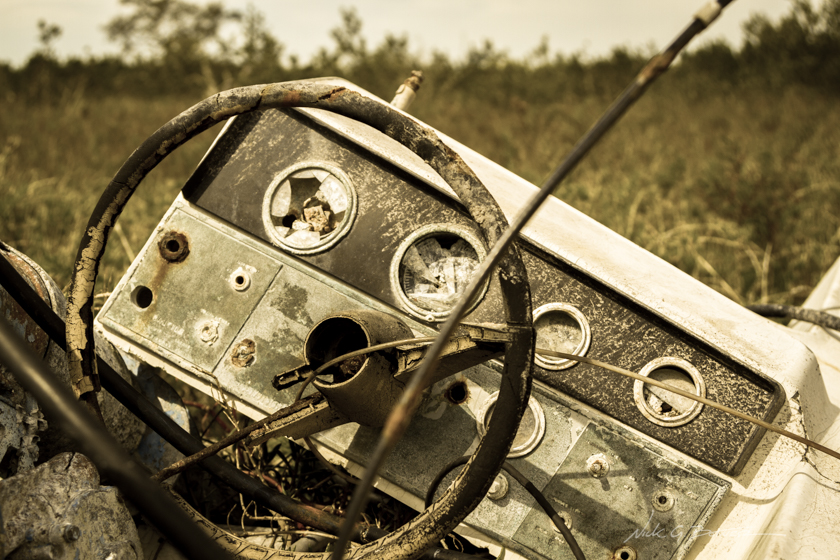 All the gauges have been busted out by rocks. Damn kids. 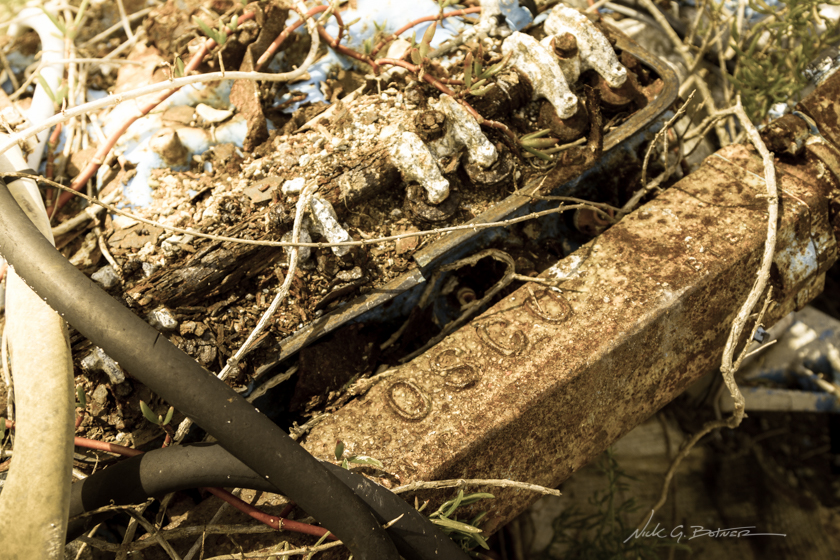 Close up of the engine block. 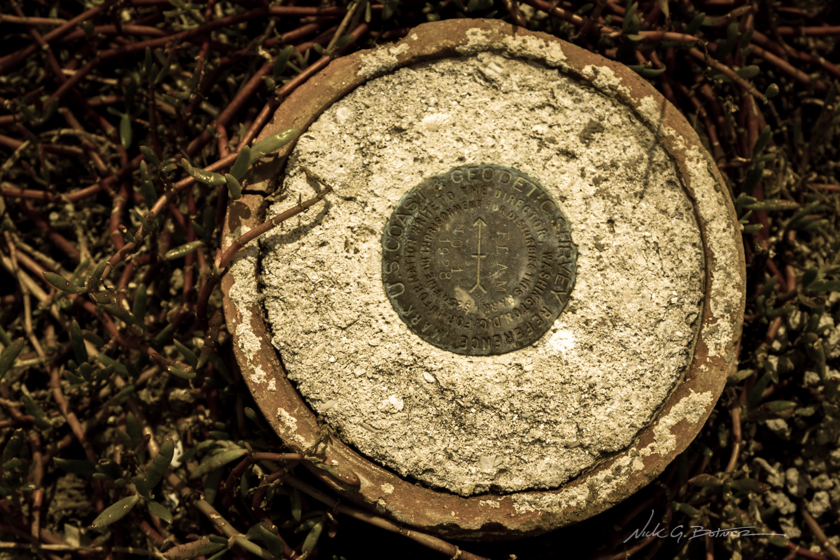 I also found this survey marker close by.

So there you have it. It’s a long hike out, and most of it is in direct sun. So if you are planning on making this hike I would recommend you tackle it in the winter time when the ground is dry, the weather is cool, and the mosquitos are in hibernation.

There is a camping spot out there as well, so if you are into backpacking you can make your way to that beach I went to and set up camp.

Here’s a little map I created. I’ve outlined the details for your reference incase you plan on making this hike as well. 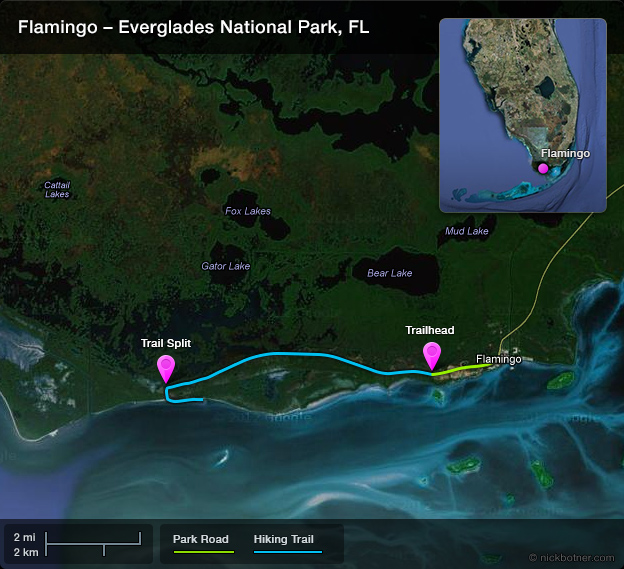 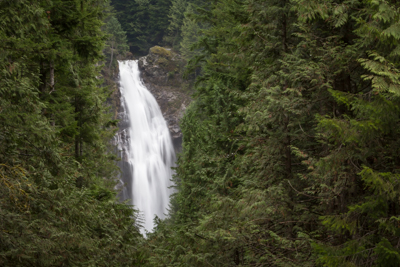