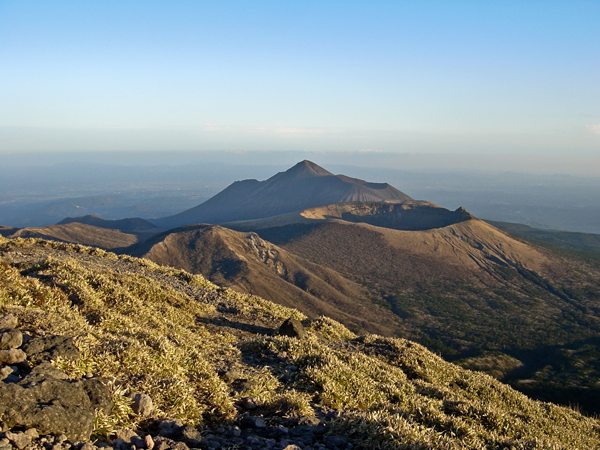 In an effort to rebuild my blog, I am starting to repost the Nihon no Jinsei series. I am looking to see if some of my family still has the text that went along with these photos. So until then, please enjoy the photos alone.

This installment was my hiking journey up the Kirishima Volcano in Ebino Japan. One of the most memorable experiences I had while in Japan.

Right next to Ebino is Kobayashi, an isolated little town in the southern island/portion of Japan called Kyushu. In the city itself there isn’t much excitement. A few tiny Karaoke bars. One little supermarket with a 100yen shop attached. And a fierce little Karate Dojo for Shorinji Renshinkan Karate-do. I guess most people spend their time eating spicy ramen, renting videos, drinking shochu, singing karaoke and beating each other up in the name of their sport. Hah!

But just on the outskirts of that town, up some rather twisty little mountain roads is a string of volcanoes that you know is there. But you cannot appreciate them until you actually go up one of them and see the surrounding area.

Thankfully I was given that chance. Even though it was getting close to sunset and the nights got rather chilled. 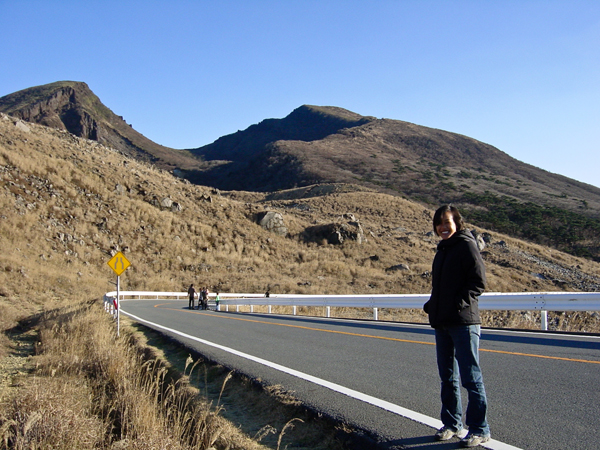 There is limited parking at the volcano, so you will have to walk up the road.

We have the summit in our sights. 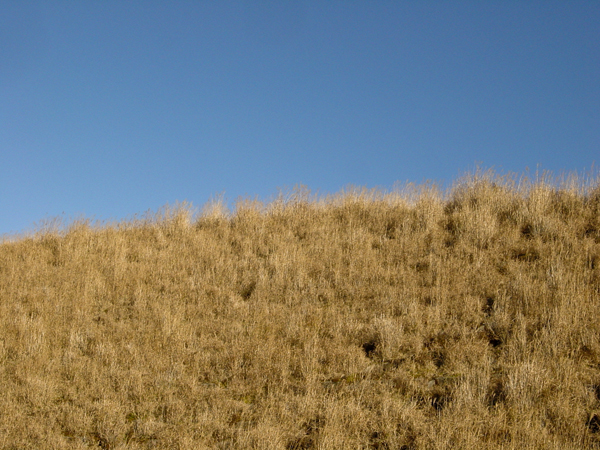 It’s almost spring, but the grass has yet to get any water and turn back to green. 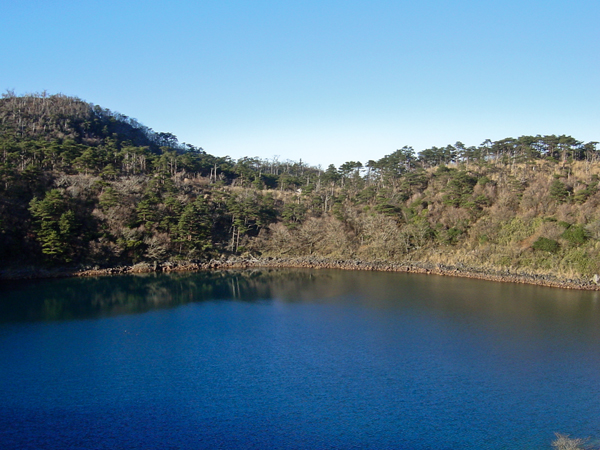 Along the walk to the entrance, there is a small volcanic lake to the other side of the road. This in itself could take a half day to explore. But we have our sights on the big prize. 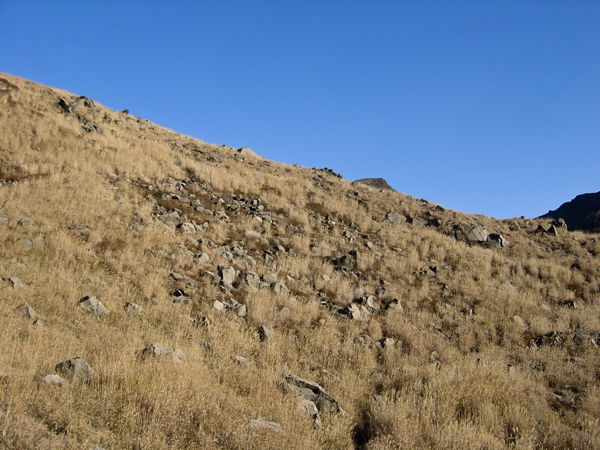 Chunks of volcanic rocks spewed from the eruption litter the adjacent foothills. 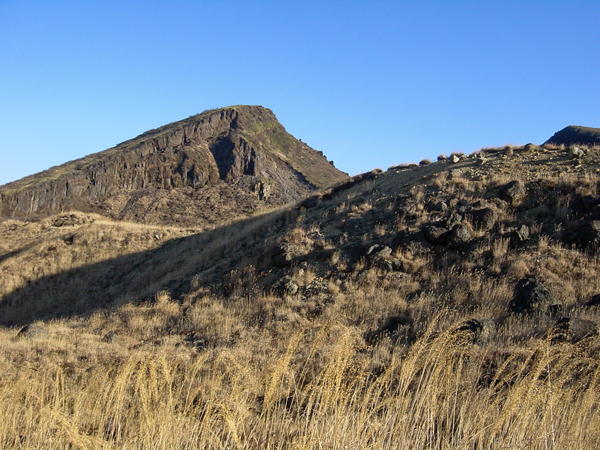 The land itself looks torn and rugged. It feels harsh, but even so, grass still grows. One of the volcanic peeks has a shade of green. All the more beckoning you on to discover its secrets and beauty. 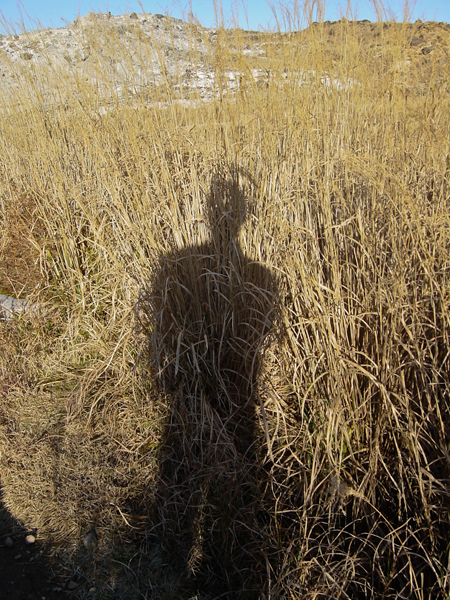 As you read my blogs, you will see I have a thing for grass. The higher the grass the better. In this shot, the oats were well over my head. And as I walked along, not even my shadow could pierce their tops. 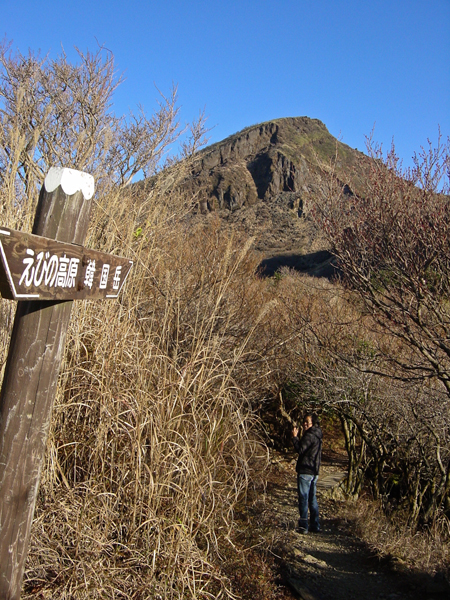 Finally, we have made our way to the  trail mouth. 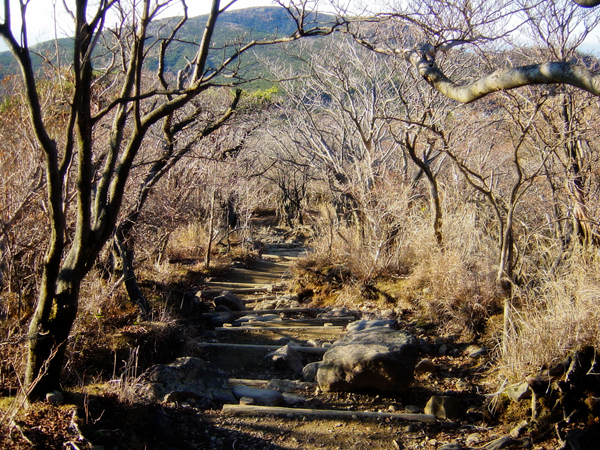 It begins with a slow incline. The land is thick with small scrub like trees. They have all lost their leaves in the winter and form a wicked little tunnel to pass through. Boulders still line the trail and logs have been places to help the way. But even in the beginning you have to watch your step. 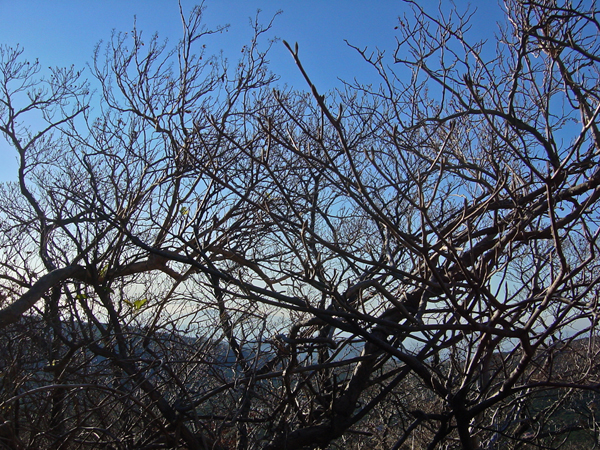 It feels as if I am walking through a living wicker basket. 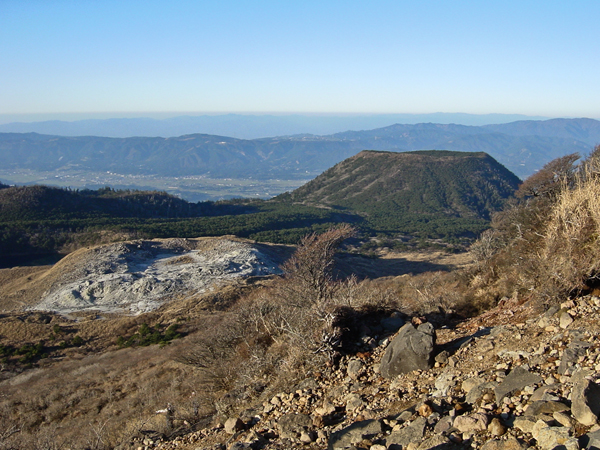 Once you break the scrub tree line. You get your first glimpse of the surrounding area. You can see a few blown volcano tops. Nothing too serious. But still impressive to see so many so close to each other. 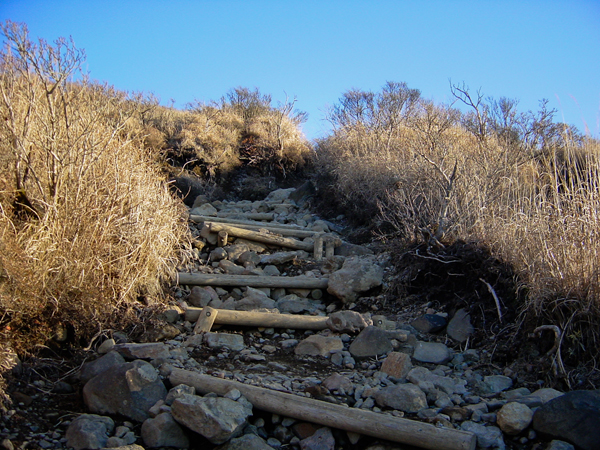 From here the trek gets a little tougher. Loose rocks fill the trail, and even though there are those little logs, they do nothing more than force you to step even higher from time to time to make it over them.

And now you can start to see the warm glow on the grass. The sun is starting to move into a setting position. So time is of the essence. 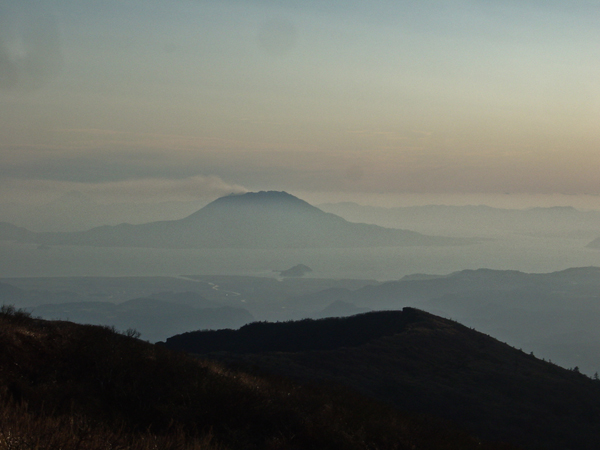 Closer to the top of the peak you can see a volcano off in the bay. That is the mighty Sakurajima. 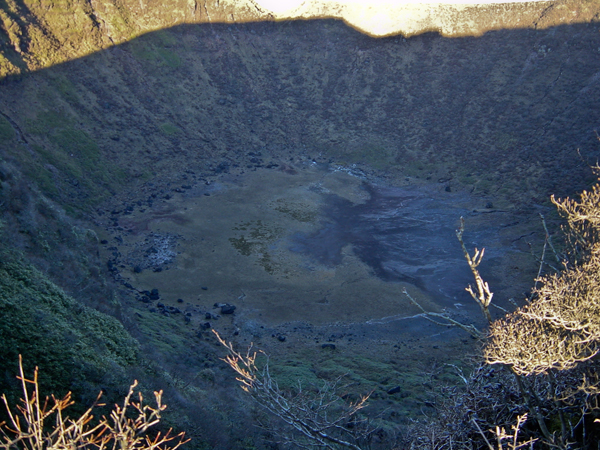 Yet further more interesting, you are now given the pleasure of viewing down into Kirishima itself. 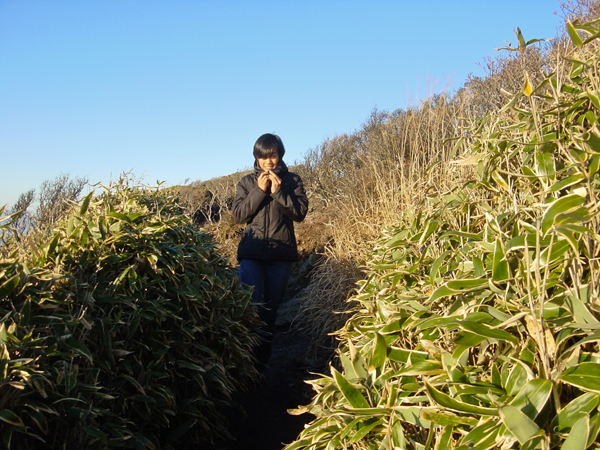 The green that was earlier seen was these low lying shrubs. They are well thick and a path through them has been worn down. 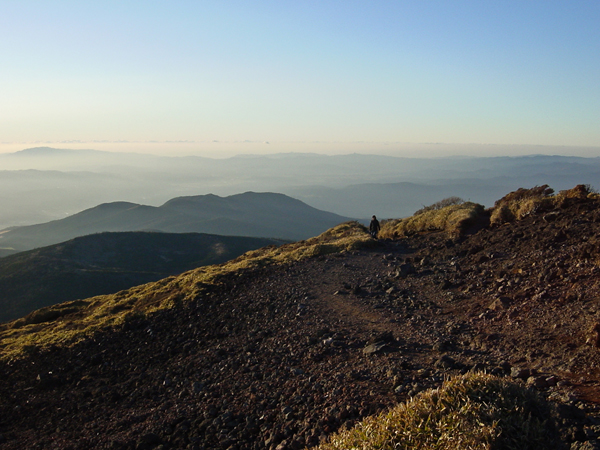 My enthusiamim took control and I made a fast pace as I neared the top. Every now and then I realized I should stop and wait for my trusty guide. 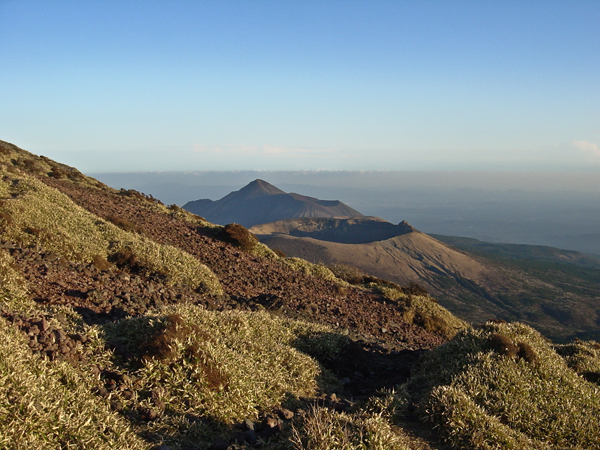 As you come around the edge you get to see a litte more of the surrounding area. In the distance are more volcanoes. Some of which have completely blown their tops.

The end of this photo is the peak. The ground has turned to a vibrant red. And a wooden post fence keeps zombie hikers from mistakenly slowly walking over the crater edge.

The Kirishima crater is not the prize here. It’s the surrounding landscape and the smattering of blown volcanoes. At the top one can only feel but in awe of the power of nature and only dream of what it must have been like to have so many volcanoes erupting in such close proximity of each other. 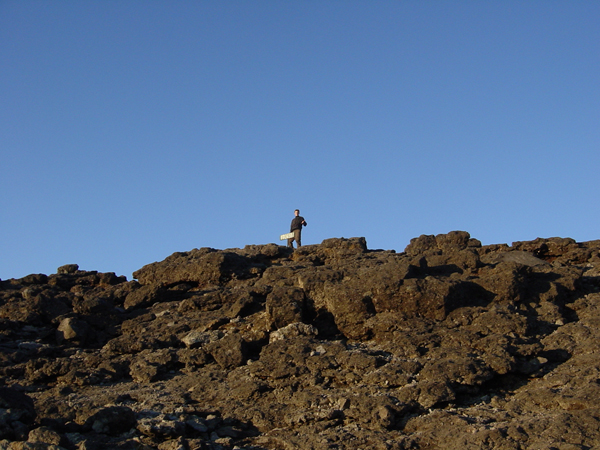 Of course I had to make my way up to the higest point and get that photo. Who wouldn’t? 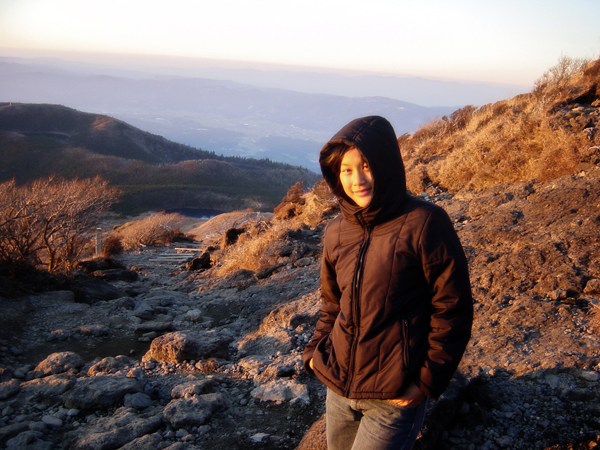 Our trip back down, the temps drop, but the color gets warmer. 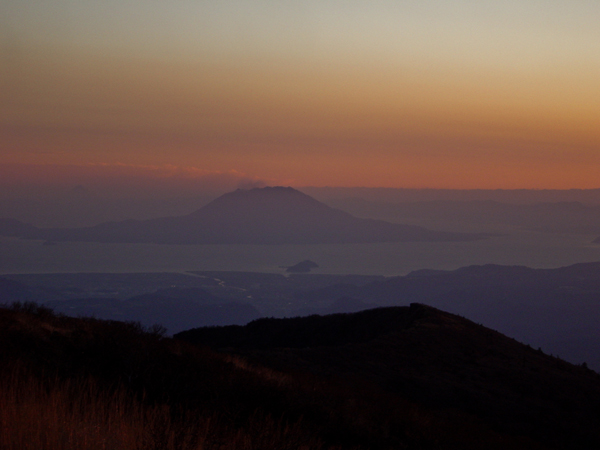 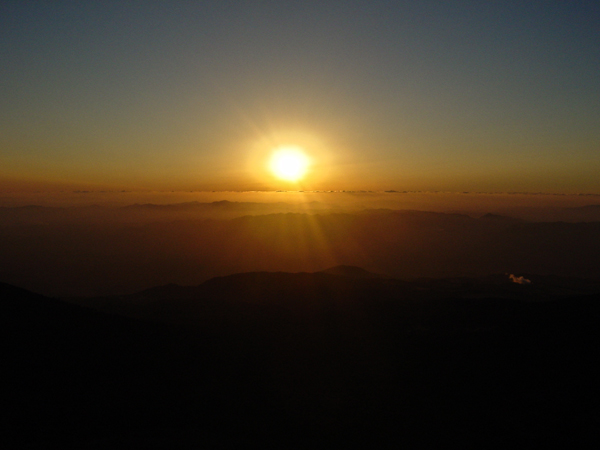 By now the temperature was dropping quick and so was the sun. It’s one thing to be slightly cold. But to not see where the heck you are going down a steep rocky trail is another. 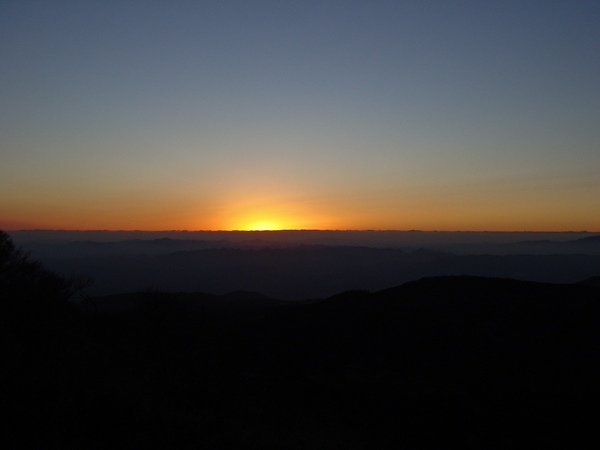 Soon after making our way back into town, we had some spicy ramen, picked up some shouchu and rented a few movies to call it a night.