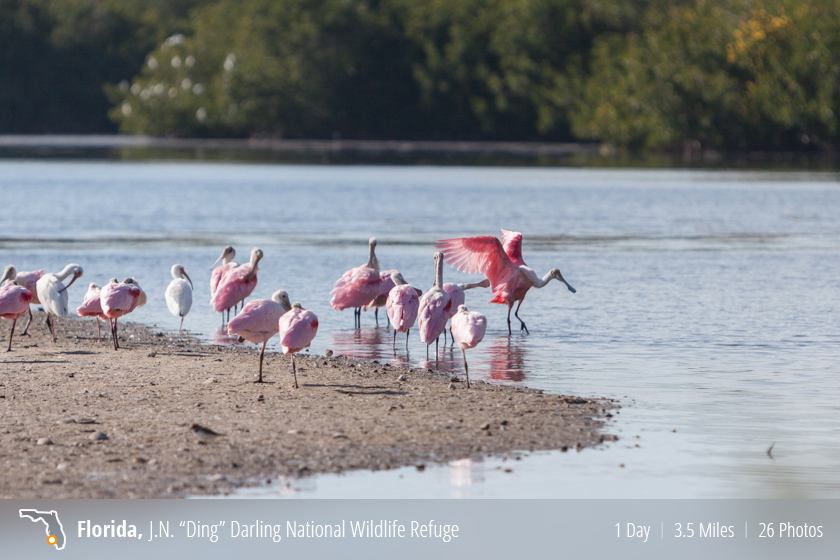 The J.N. Ding Darling National Wildlife Refuge is a curious place. Located on Sanibel Island, Florida, it fits in perfectly with the surrounding area. For those that have never been to Sanibel, one of the main things to do is rent or bring your own bicycle. With bike paths along most of the major parts of the island, it’s quite the friendly place for the recreational cyclist. Basically a nice easy way to tour the island, and the wildlife refuge is no different.

After driving into the refuge, there is a small booth on the side of the road where you pay for your access. It’s your normal affair. But what makes this place different is the fact that this is a one-way paved tour of the refuge. If you take a bicycle, there is a dirt trail at the end that will loop you around to the beginning. But if you are in a car, there is only one way to go, with stops along the way. And for the really lazy, you could just drive all the way through the preserve, see the majority of it, and never get out of your car.

So with that being said, this isn’t a very intimate experience. More of a comfortable way to spend the afternoon. Don’t get me wrong, there are ways to make it more adventuresome. Like walking almost the entire loop (a good four miles or so). But otherwise, you can sit back drive from stop to stop, get out if you want, or keep moving on to the next.

As you drive along, there are small bodies of water on either side of the road where birds will gather. Depending on the time of the year, you can see different kinds of birds as they migrate through the area. The reason we have come is to try to get some photos of the massive White Pelicans that nest here for only a couple months a year.

After we paid our entrance and drove into the refuge we quickly came to our first stop. Looking out the windows we could see a few herons and pelicans feeding on the bait in the shallow waters. None of the white pelicans were seen, but we got out anyways to see what kind of photos we could get. 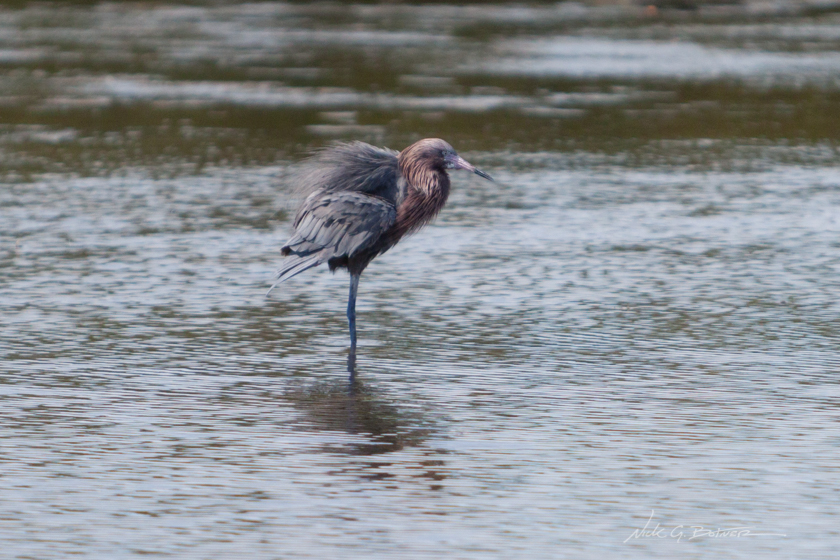 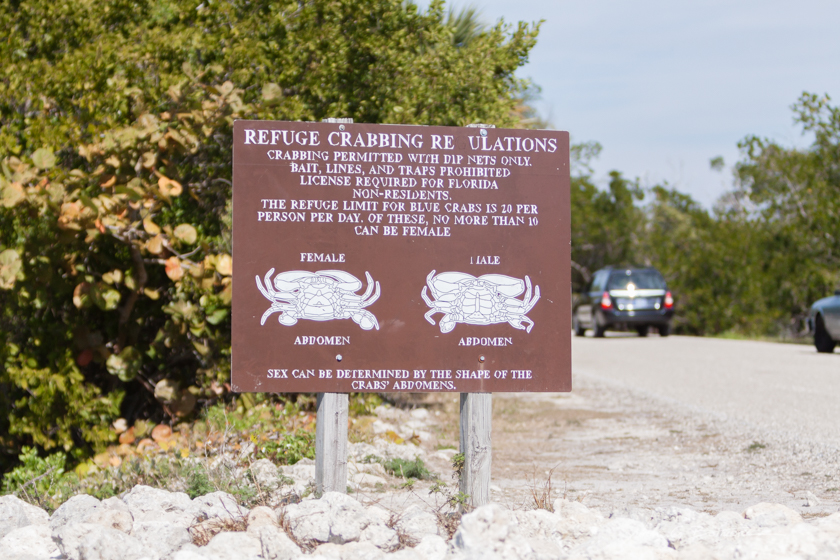 Here you can see the road and some of the cars as they tour through. Also, I didn’t know but I guess you can do a bit of crabbing in the refuge, if that’s what you are into. 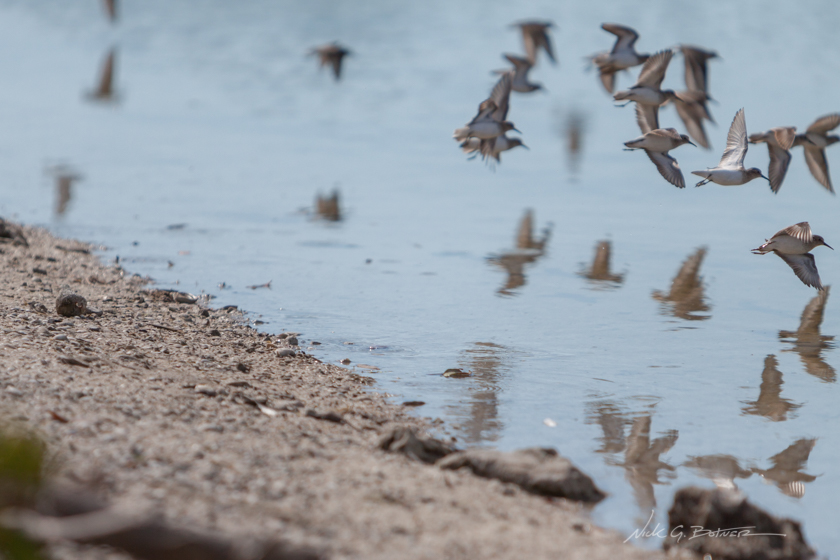 I wasn’t really happy with standing along the side of the road taking my photos with everyone else. So I hopped down onto the sand to see if I couldn’t find anything better. This flock of sandpipers were heading right for me, but turned right as I took my shot. They were amazingly fast!

This was just the beginning area, so we hopped back into the car and drove to the next location.

The next body of water is much much bigger. And since it was low tide, there were parts of exposed land where the birds were all resting. And by resting I mean sleeping. 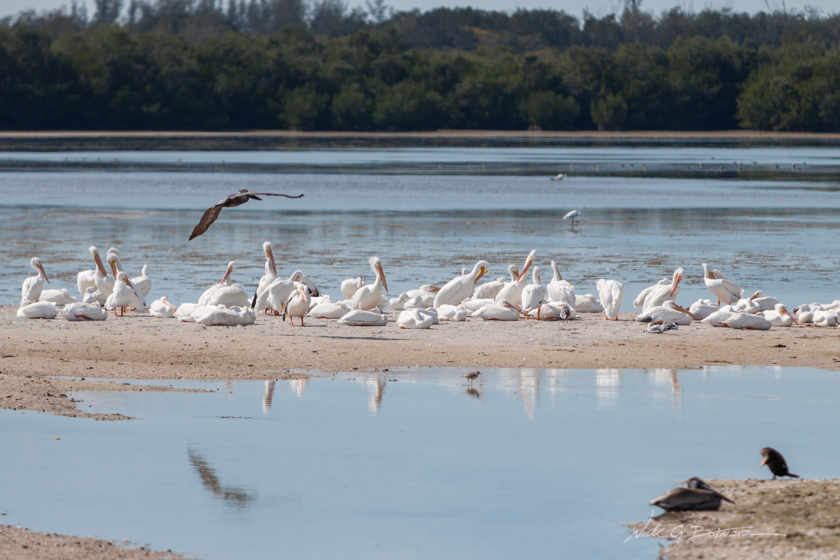 And here is what we had come to see. The big white pelicans. Sadly, they were so far away you couldn’t tell how big they really where. But lined up to some brown pelicans you could get a little sense for their size difference. 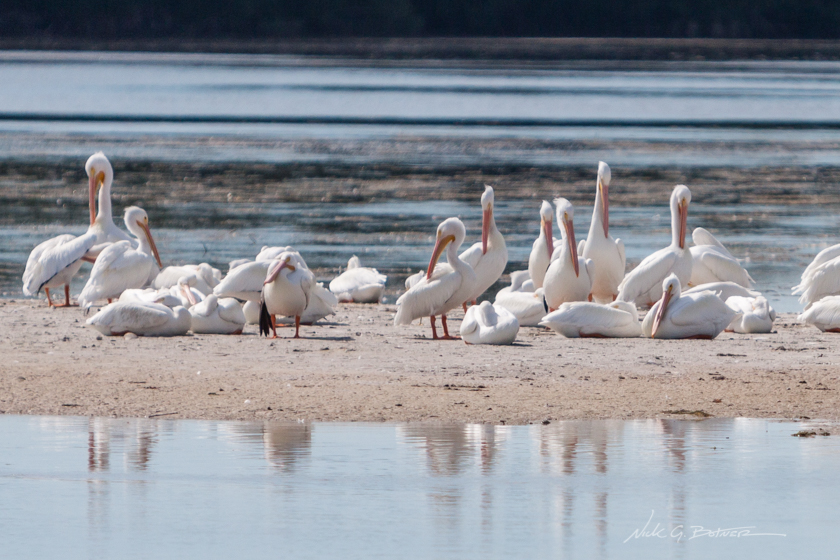 About as zoomed in as I could get with my 200. The white pelicans were all sleeping and cleaning themselves. It was late morning, and we were told by some other photographers that the best time to get the pelicans was early morning or late afternoon when they are flying in and out. We were told they will fly right over top of you, and with a wing-span of up to nine feet, they provide for some nice in-flight action shots. At least I imagine so. 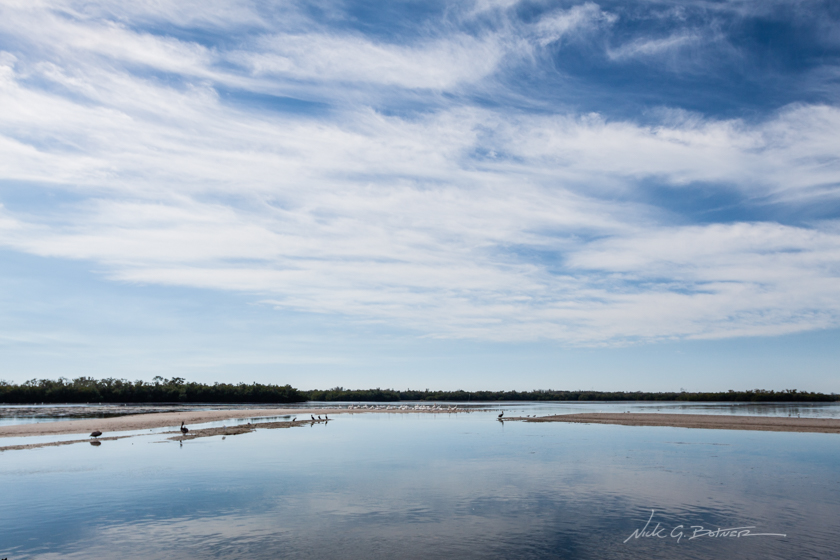 Well I could tell I was getting my fill of sleeping pelicans, so I switched out for my wide angle lens and tried to capture some of the beautiful weather we were having that day.

If you look in the center of the photo, on the land, you will see just how far out the white pelicans were.

Along the route, there are little bridges that connect the bodies of water from either sides of the road. And at this particular bridge there was a group of people clapping and cheering from time to time. They were all looking down in the water in front of the bridge. I became curious and decided to check out what all the commotion was all about. 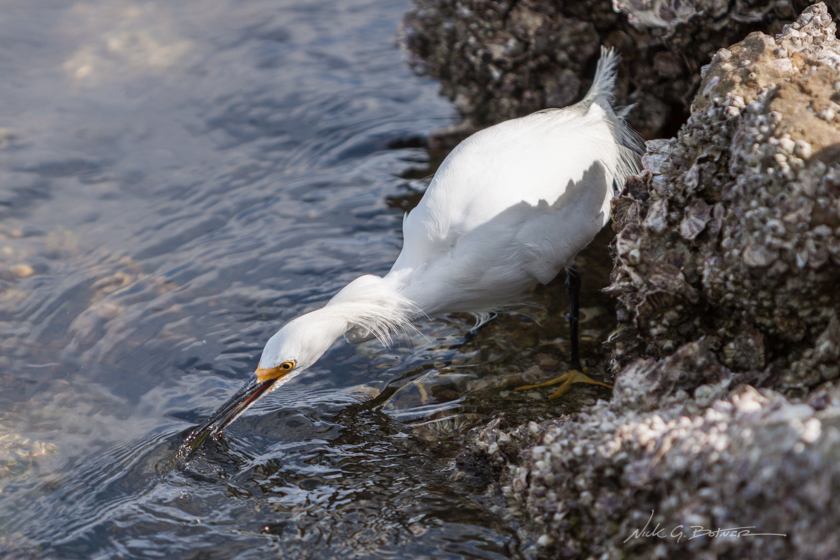 They were all watching this little snowy egret fishing along the waters edge. The current was flowing through, and this little guy was sitting there picking off the minnows as they passed by. 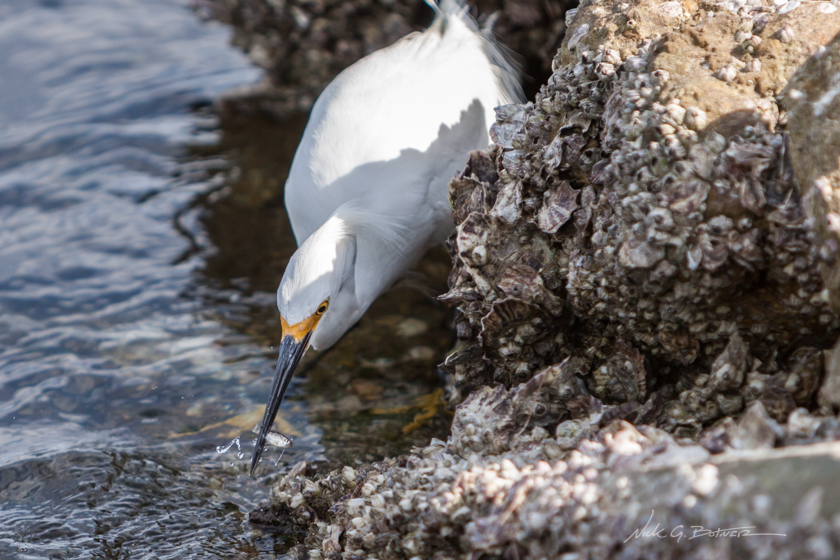 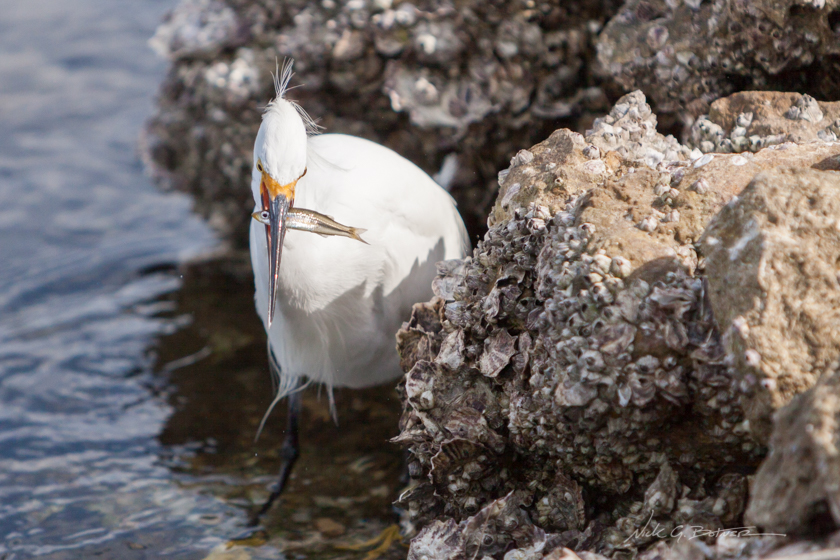 This went on for quite a while, and I was surprised to see this bird swallow up so many fish. 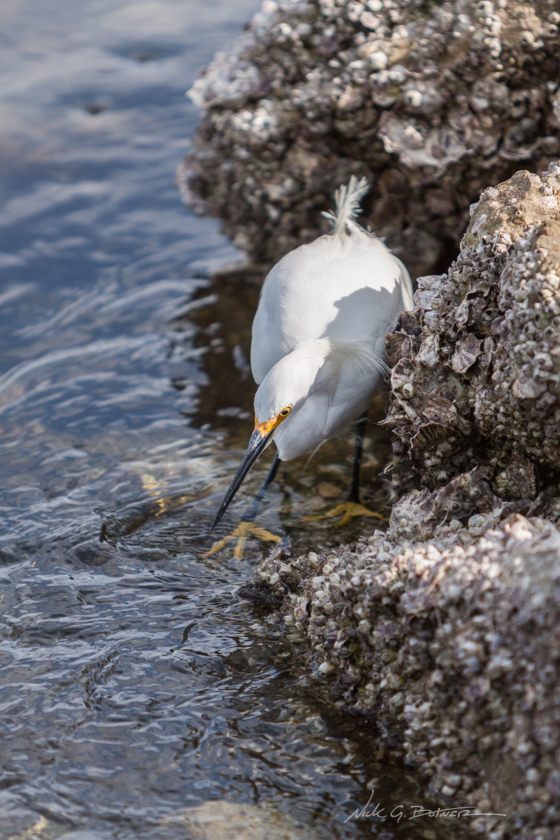 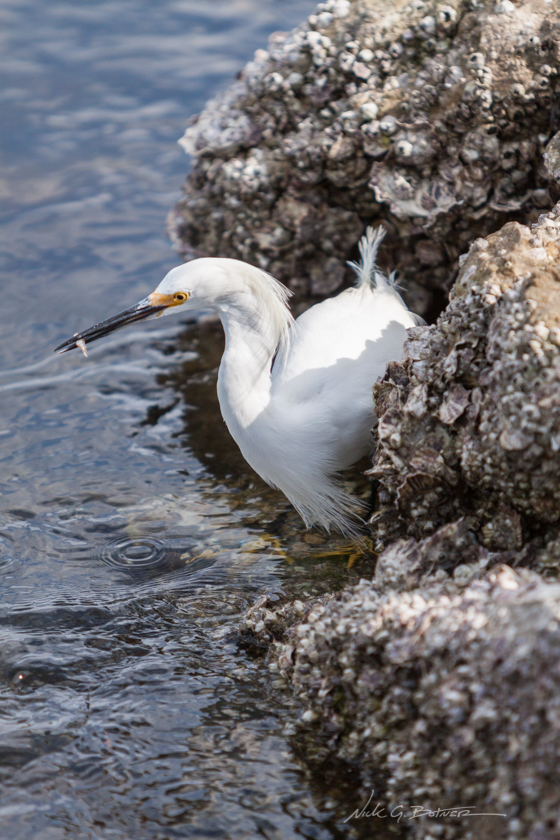 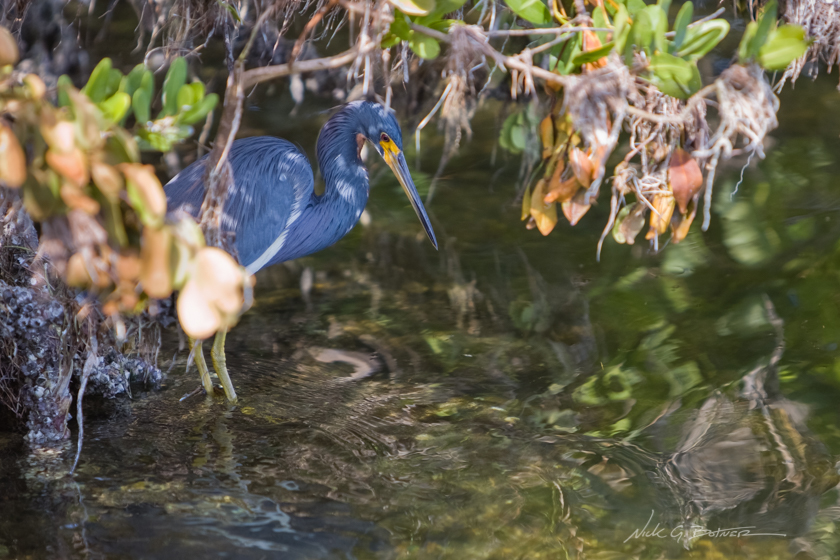 Hidden on the other side of the water was a tri-colored heron trying the same approach as the snowy egret. However, he didn’t seem to be as successful. 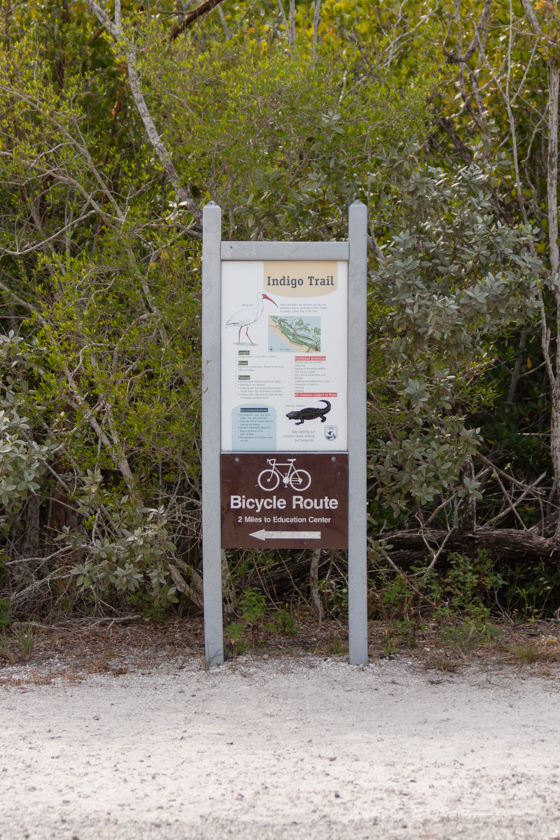 Moving along, further up the route, you will come to a parking area for the Indigo Trail. Accessed by both bikes and hikers, this is the largest walking path on the refuge, measured at two miles.

By this point I was dieing to get out the car and explore around. You miss so many little things when you are in the car, so I didn’t want to miss this opportunity to get out and run around. 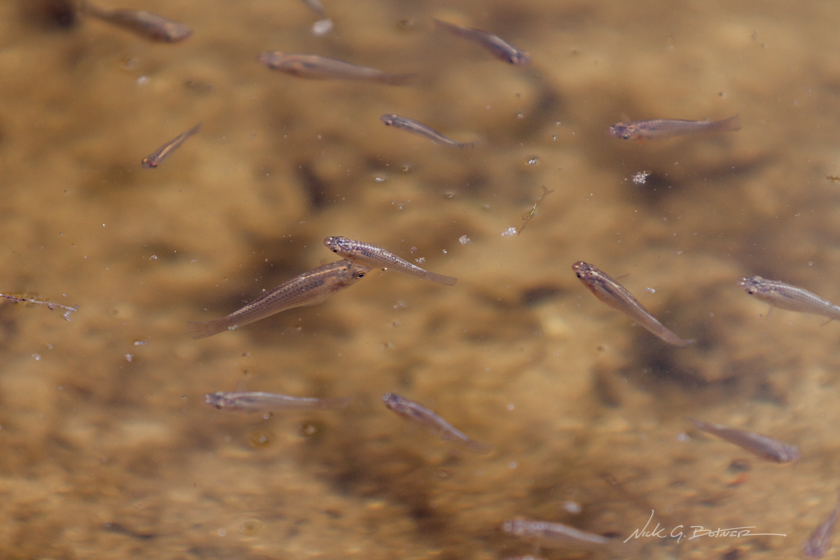 The beginning of the trail splits through some slow moving mangroves pools. These mosquito fish were barely moving in the afternoon heat. 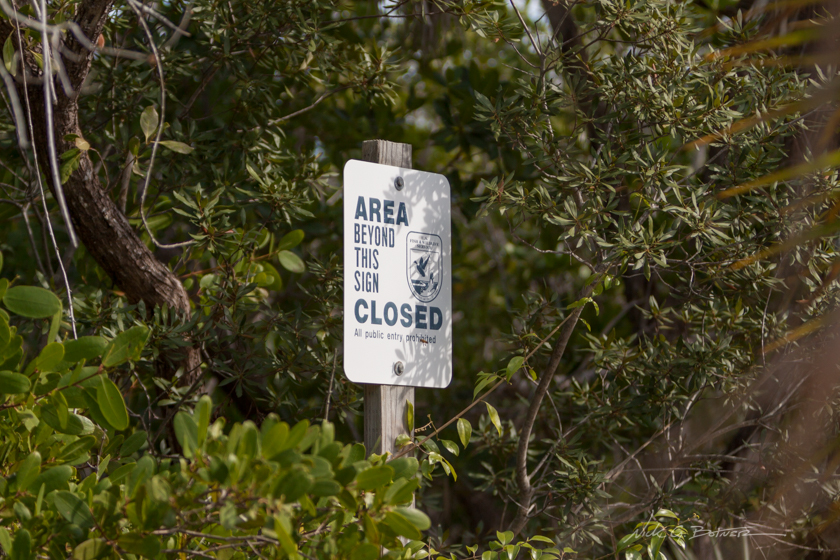 I normally love signs like these. But this time, there didn’t seem to be any opportunities for photos behind the signs, so we respected their wishes and continued on. 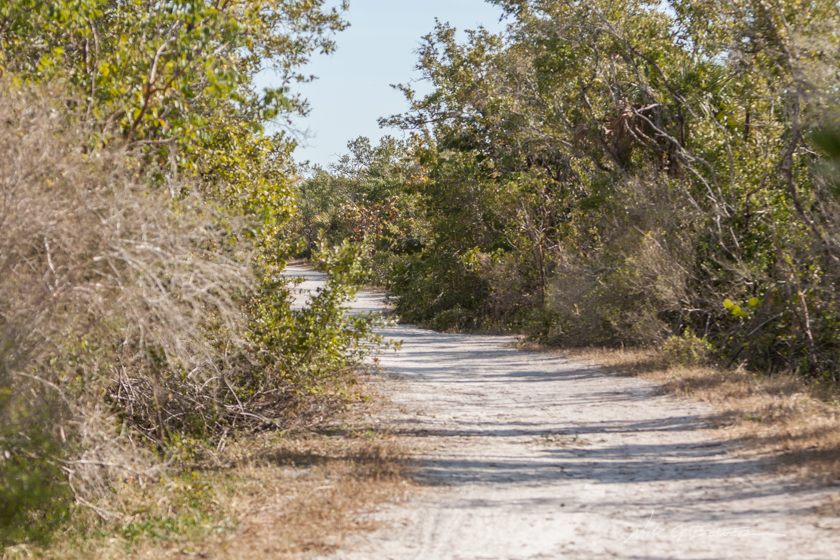 Here you can get a better sense of what a majority of the Indigo Trail looks like. Its a sandy trail flanked by scrubby mangroves and the occasional gumbo limbo tree. 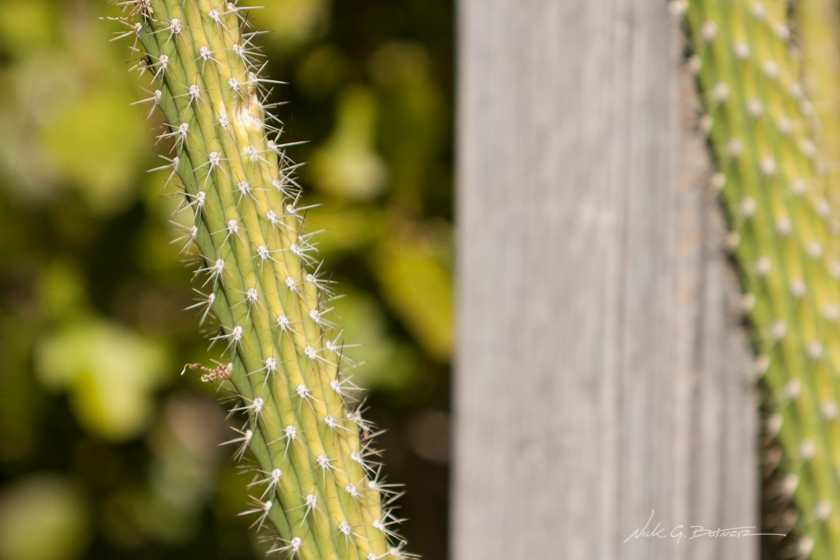 There are also a few cactus along side of the trail. 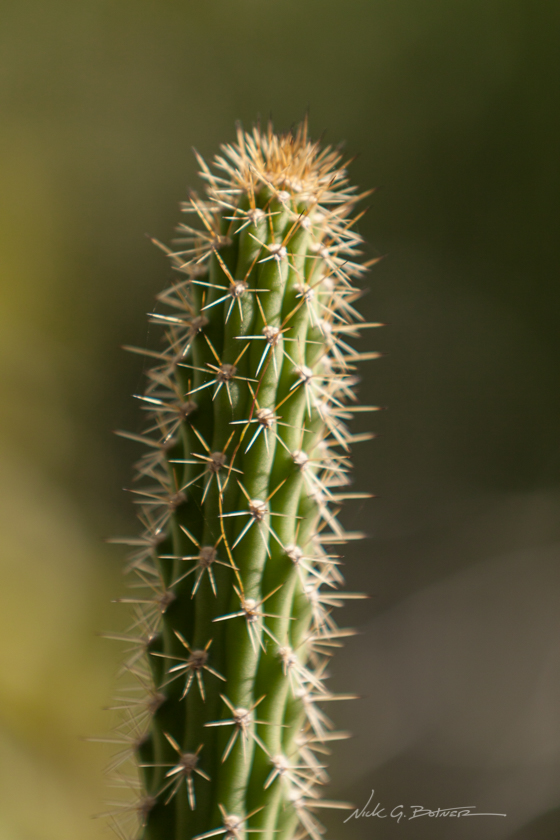 Providing for some interesting closeups. 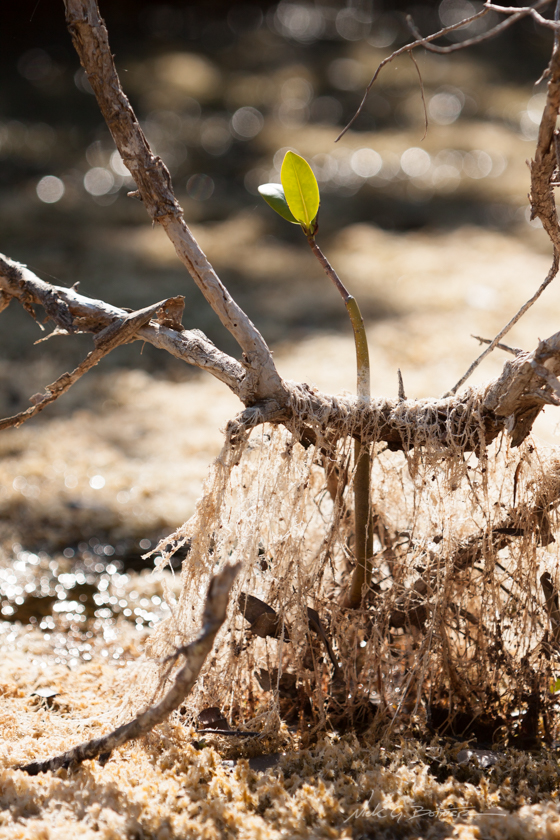 Parts of the trail do open up towards the end, exposing some small pools of water. It was low tide and this mangrove seed was just starting to take route. 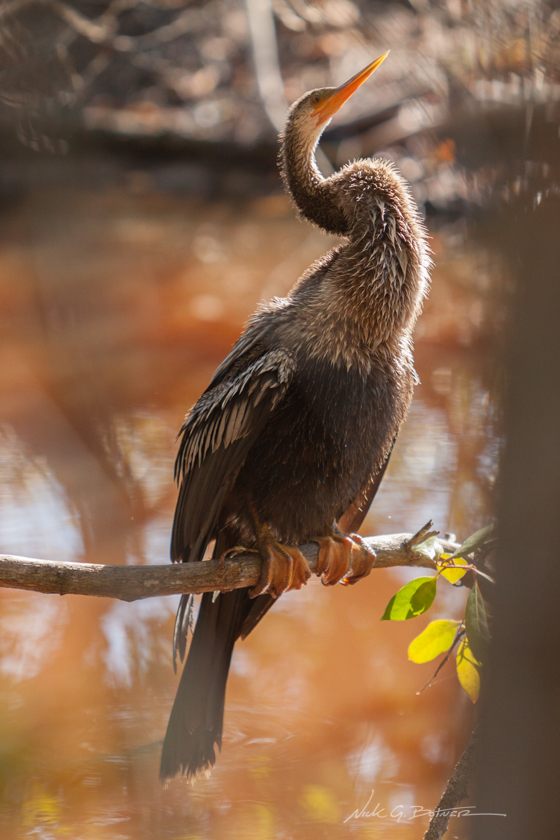 We nearly missed this anhinga perched on the mangrove limbs above the water. You couldn’t really see it easily from the trail, so we had to slowly sneak through some mangroves to try to get a better look. 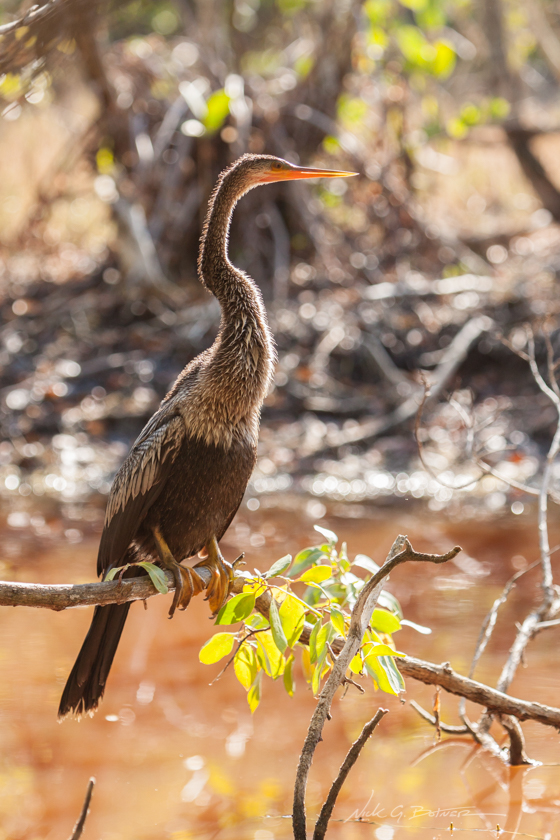 I thought for sure the anhinga would have flown by now. But it was patient with us and watched us closely. 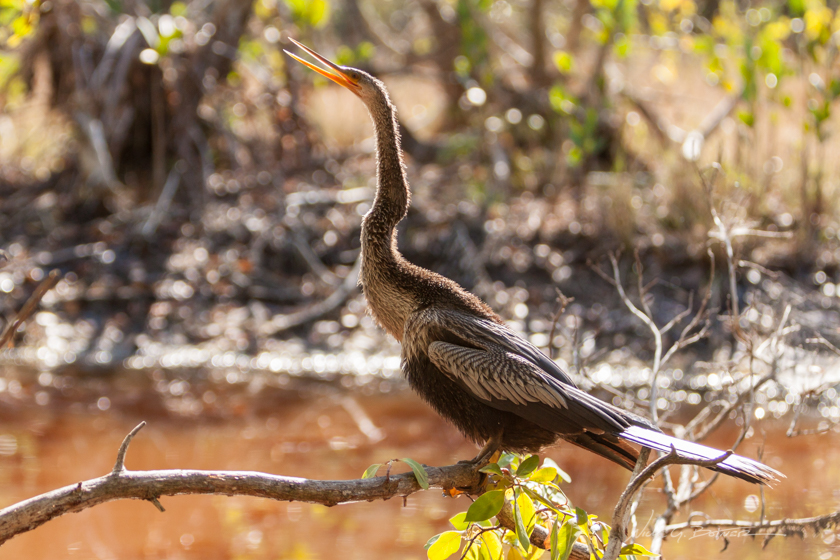 By now it had had enough of us and decided it was time to fly off. Instead it dove into the water and that was it. 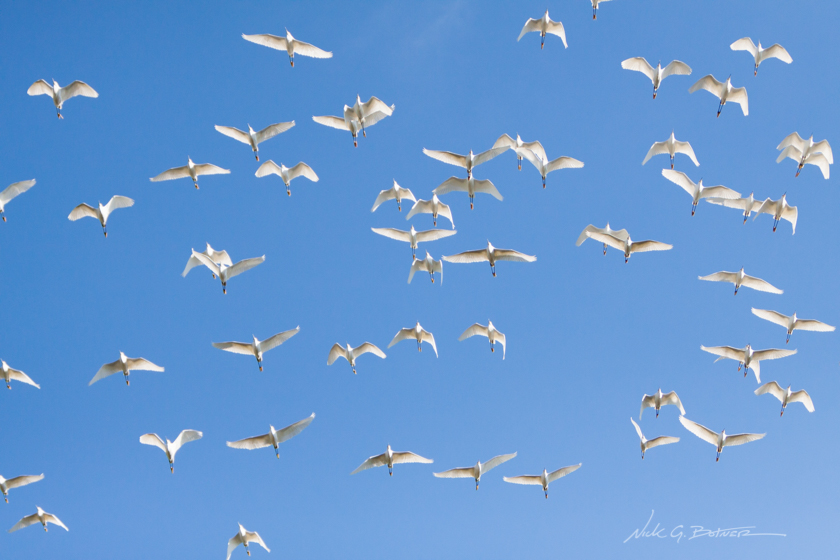 At one point along the trail, a flock of snowy egrets flew over head. I think this shot captured about 1/5 of the total flock.

Well we had made the two mile hike through the Indigo Trail. There wasn’t much to see. And by this point I was really liking the idea of having a bicycle. I only say this because of all the people who were passing us on their bicycles as we walked along.

So the trail spits you out back at the front toll booth. We weren’t going to walk back down the trail, but rather walk the main car route and see if any new birds had flew in. 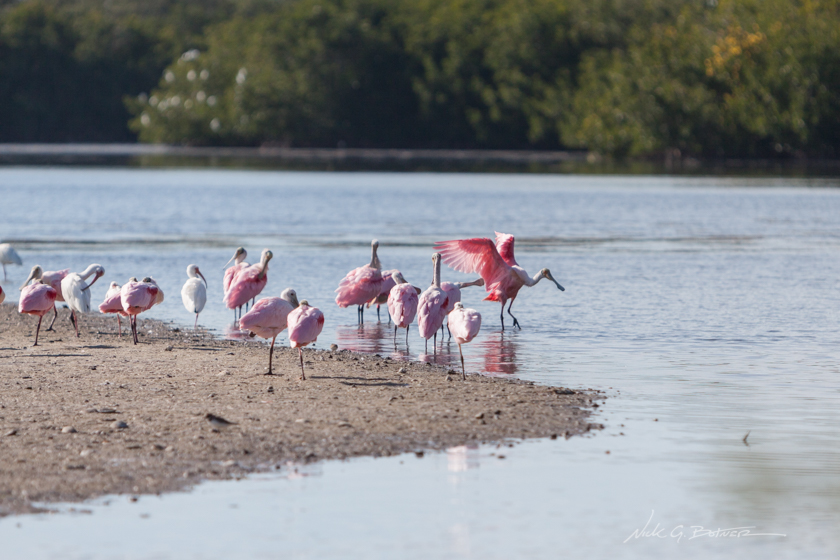 Turns out a flock of roseate spoonbills flew in while we were off walking the trail. 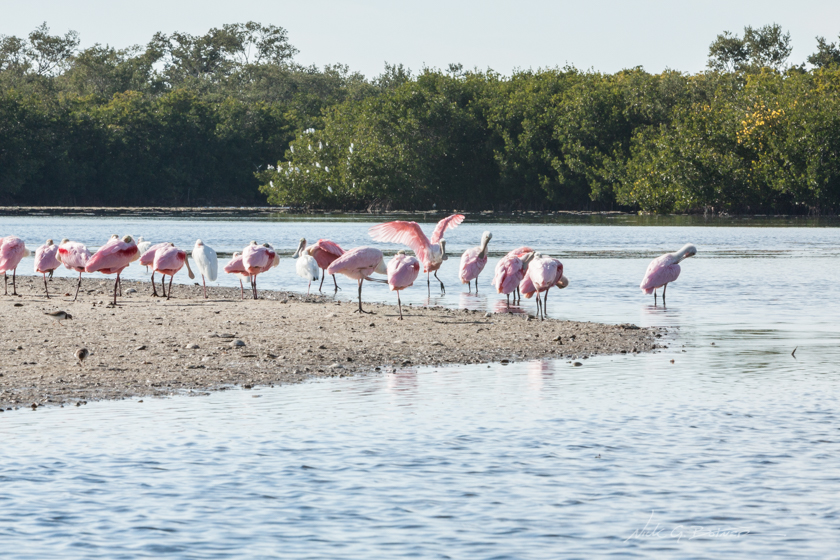 However, they were also rather far away and all I could really get were these group shots. 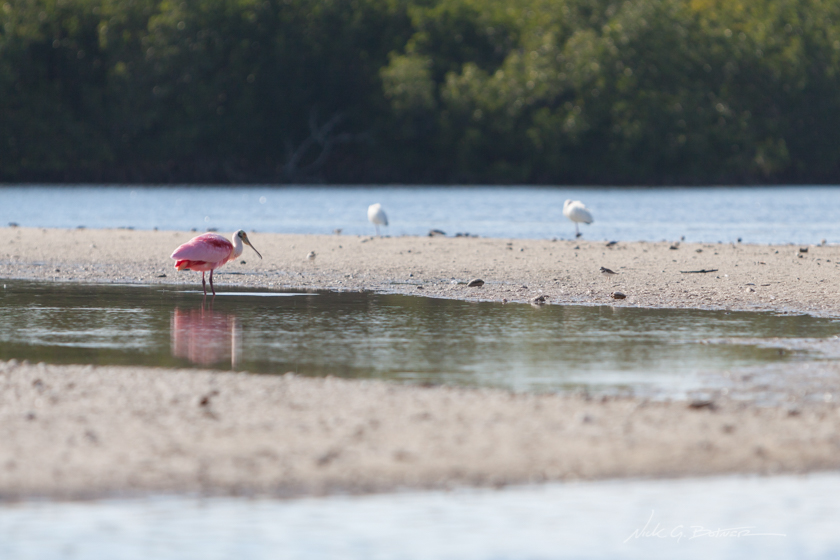 This lone roseate spoonbill was off feeding in the tide pool.

As we walked back to the car, the other bits of water hadn’t changed much. The pelicans were still sleeping. And there wasn’t much else that was new. However, I will say, the stretches of road where there is no water is extremely boring. Just solid mangroves. And what tortures you is the fact that the road is rather twisty. So as you get closer to the end, you think “One more turn! The car has to be right around that next turn.” But its not. And you have to walk more. People drive by and look at you like you’re some kind of photographer freak for walking instead of driving. Hah, or maybe that’s just my own personal opinion.

Well, we made it back to the car, and we were rather worn by this point.

What we passed on was the look-out tower. It’s further along the route, towards the end. And it basically overlooks more of the refuge. As we drove by it,we didn’t see any birds of interest. So instead of getting out the car and hiking up, we carried on.

Also, right before the end. There were some shorter trails. But again, by this point it was the middle of the afternoon, and we had a long trip home.

So that’s it for my J.N. “Ding” Darling experience.

Things I would have done differently if I were to do this again…Come earlier in the morning, like as soon as they open. Bring a doubler for my telephoto lens, what I had just wasn’t enough. Maybe bring my bicycle instead, and then do the whole thing a couple times from my bicycle. Just park the car, take out the bike, load up, and do the run. Oh and bring more fluids to keep hydrated!

If you’re interested in going, check them out on the web. http://www.fws.gov/dingdarling/ Look through their site and try to plan a time to visit when there will be birds nesting. Also look into making a weekend of staying in Sanibel, it’s a beautiful area. 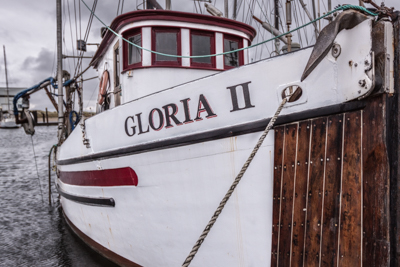