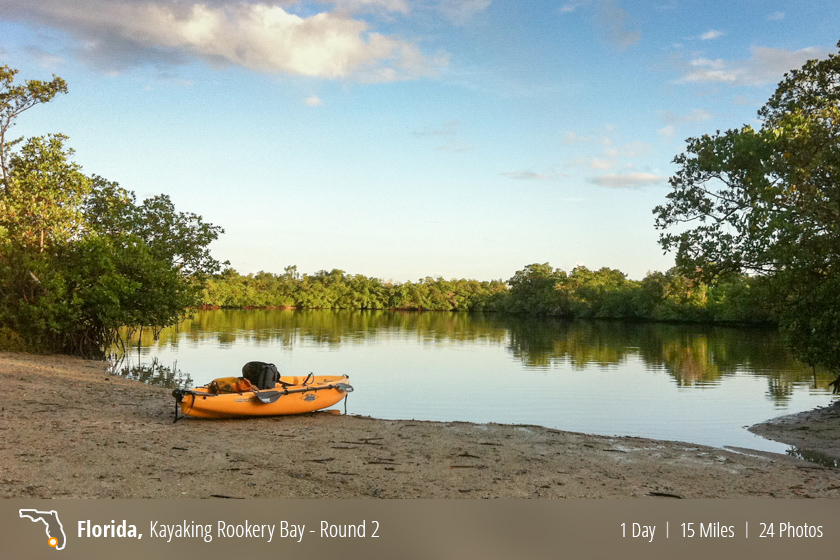 Early one Sunday morning I packed up the gear and set my sights on kayaking from Rookery Bay all the way up to Sand Hill Bay and back. With cameras in tow, here are the images I was able to capture. 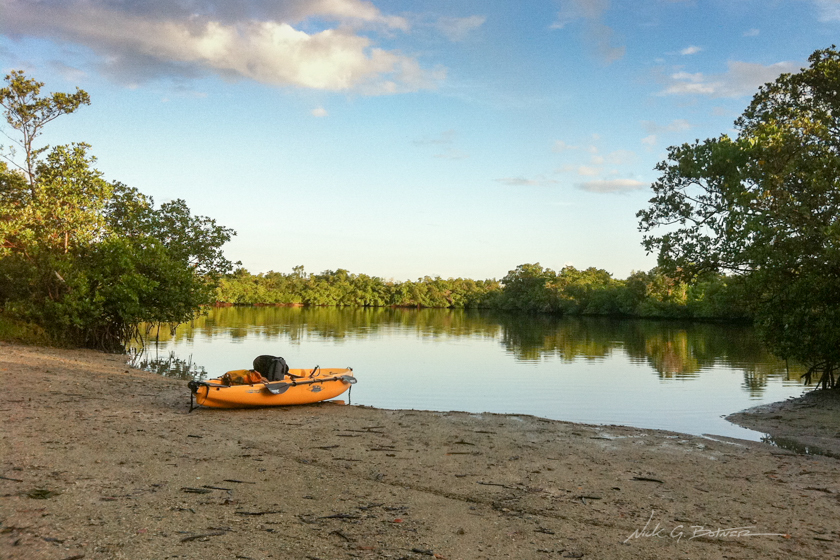 At launch, the tide was almost dead low. 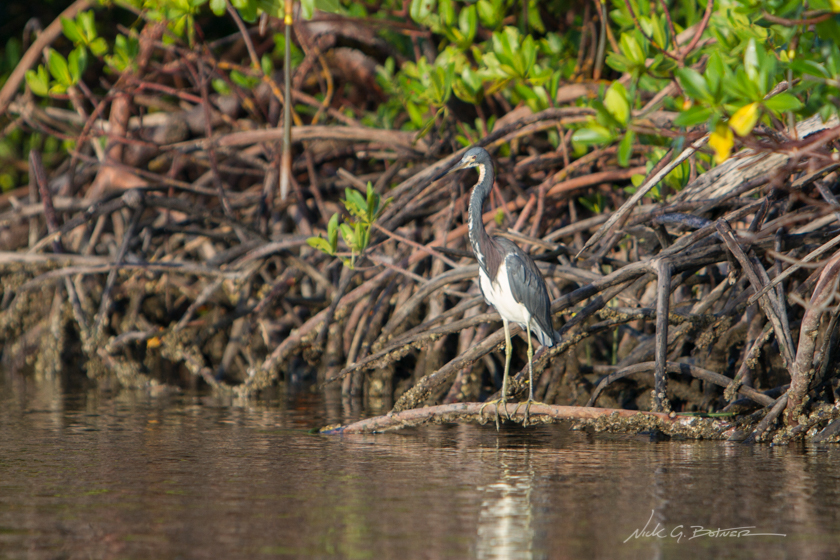 This tricolored heron takes advantage of the exposed mangrove roots and waits for unsuspecting minnows to flow past in the outgoing tide. 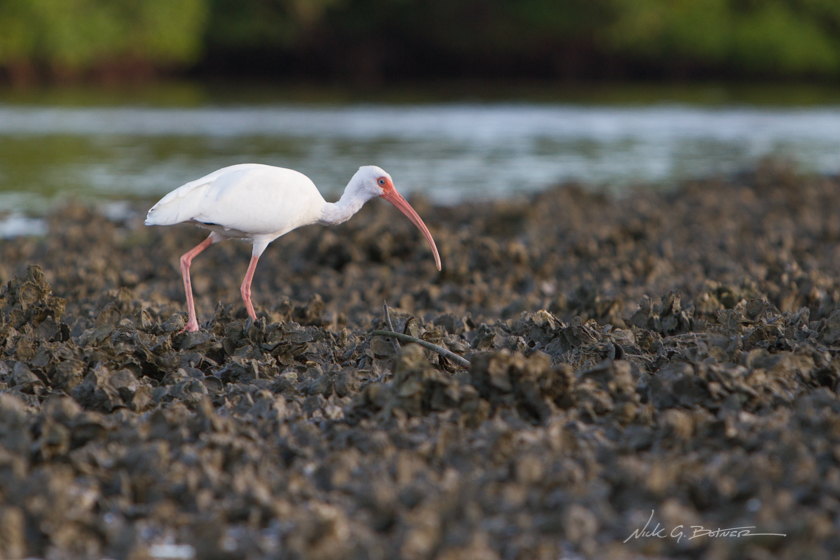 The low tide not only exposes mangrove roots, but it also exposes entire oyster beds.  This white ibis hunts through the exposed bed looking for any lost crustaceans. 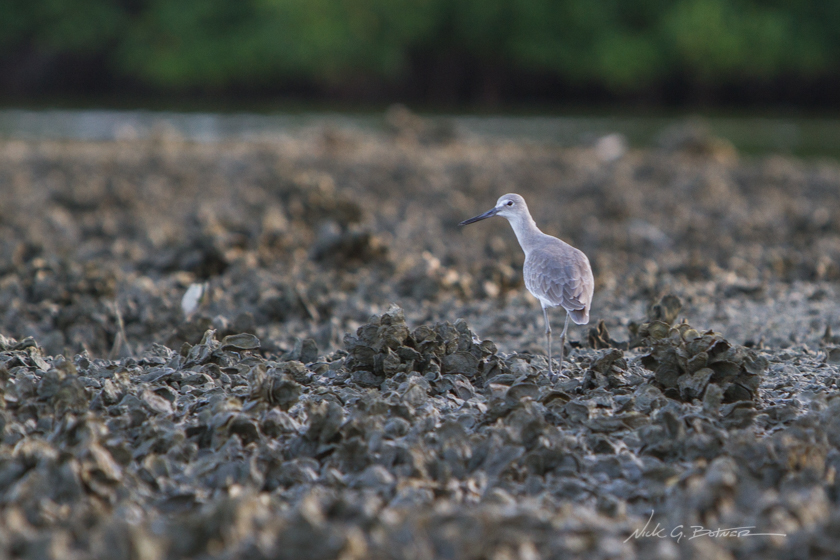 A willet joins in on the hunt. 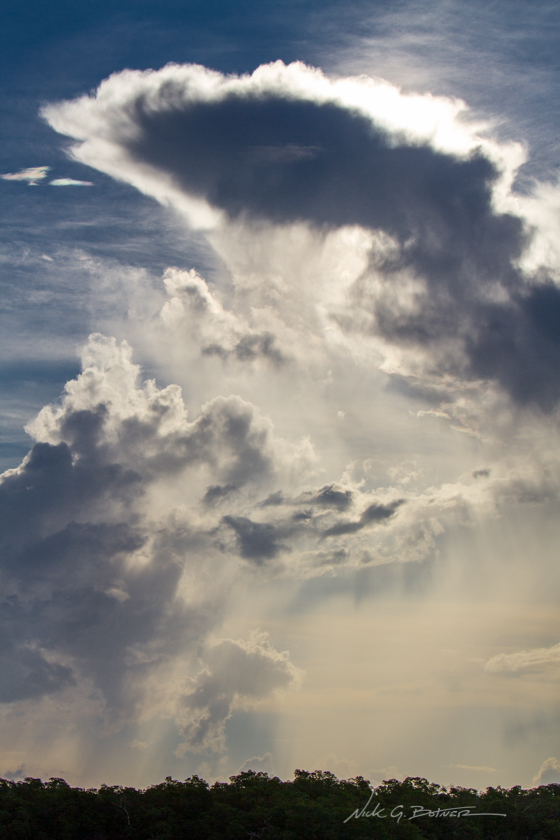 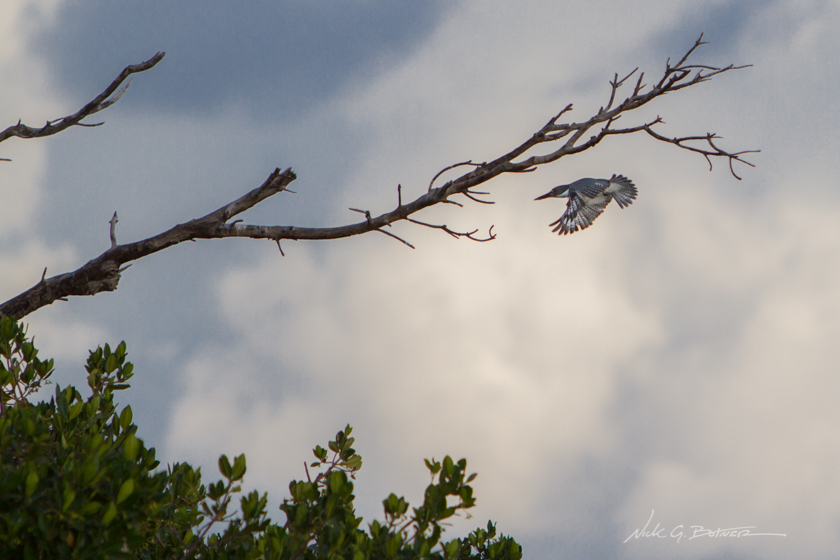 A common site in the Everglades, the belted kingfisher perches high atop the mangrove edge looking for prey. Unfortunately, the kingfisher takes no chances and rarely lets you get within decent photographic range. 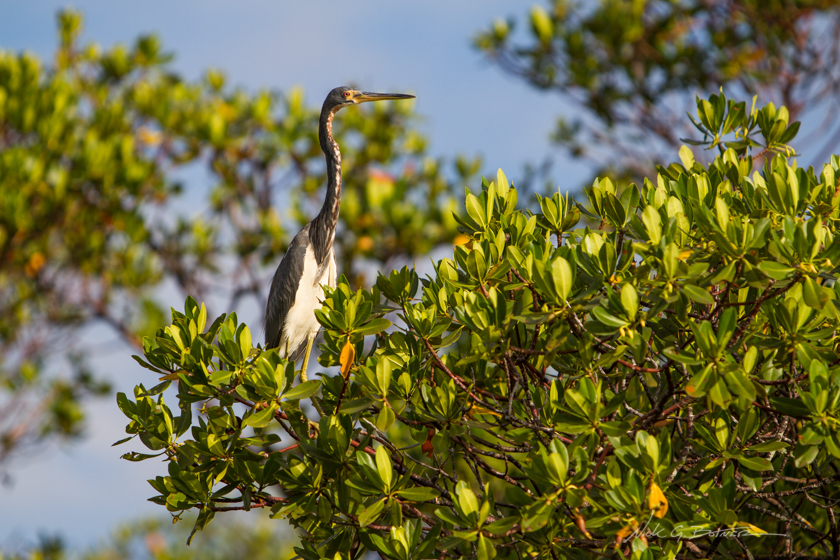 A tricolored heron rests on one of the many remote mangrove islands found in Rookery Bay. 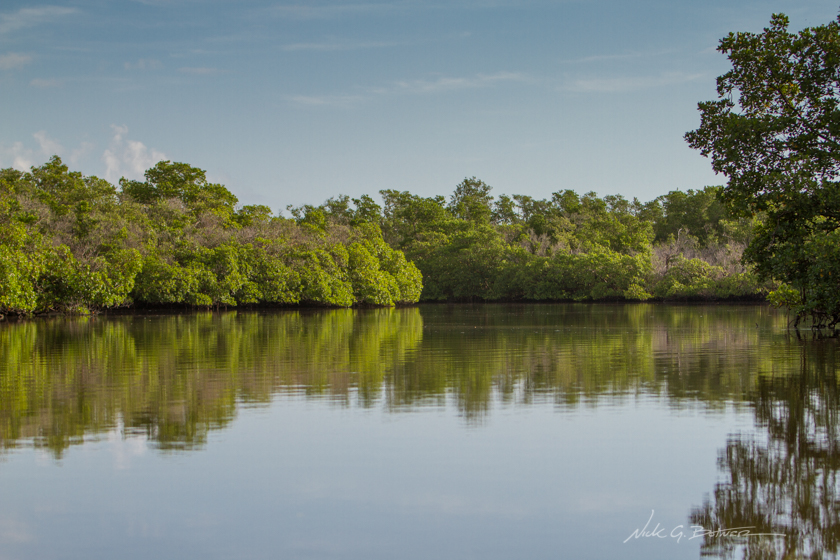 The lack of wind provided for some glassy inner river paddling. 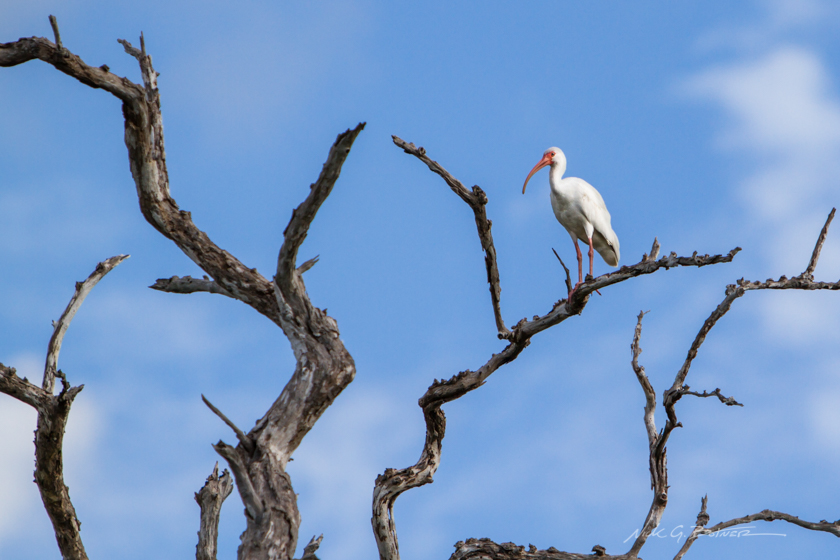 A white ibis casts judging eyes upon me as I paddle back and forth trying to get the right angle and cloud pattern for the shot. 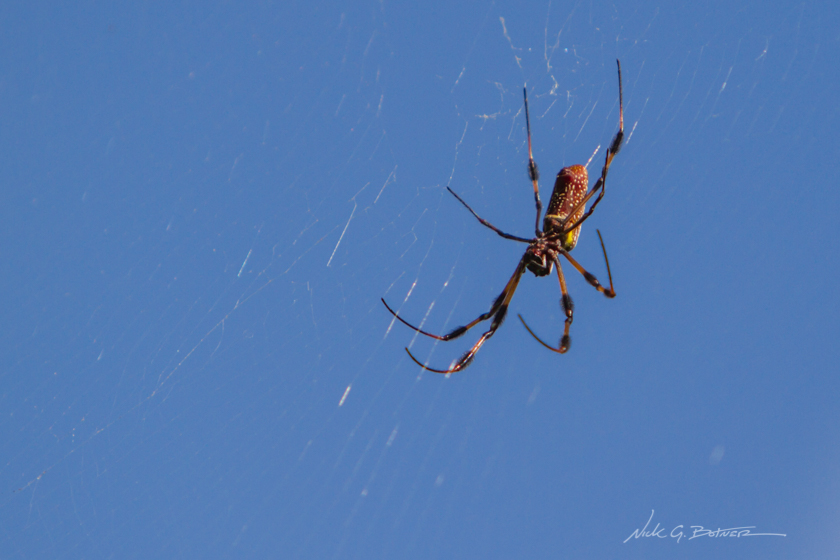 If this feels like it’s a bit too close, that’s because it was. This golden orb weaver (Banana Spider) was covering the narrow river I was paddling through. I had to duck down in order to pass underneath its massive web. For your reference, the body alone on this spider was almost an inch and a half. No include the legs into that and imagine how big it is. 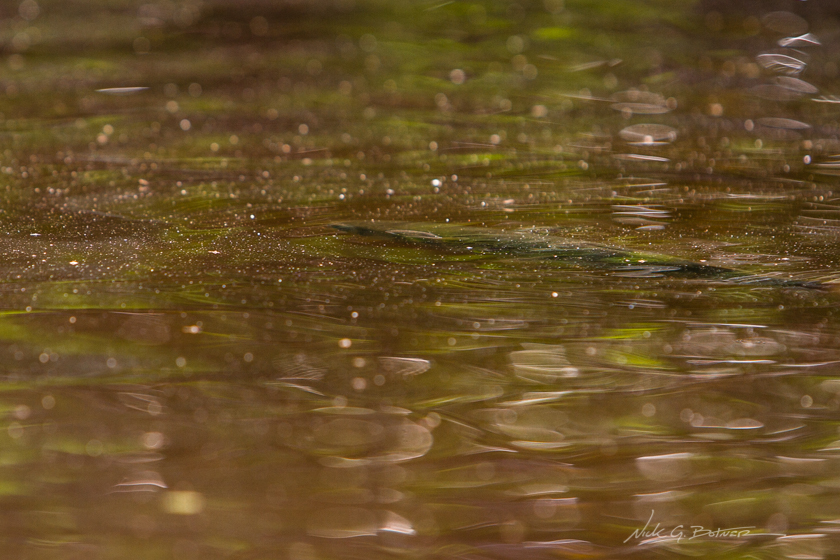 If you cannot notice it, there is a small school of lady fish resting just below the surface. 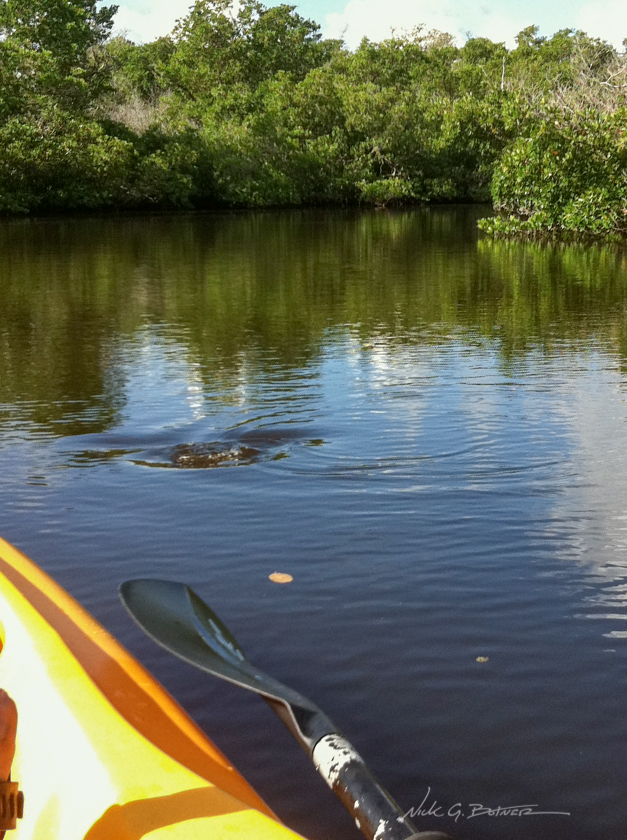 The Lady Fish like to play this game called “Wait till he’s right next to us and then let’s haul ass”.  You start to get used to the constant unexpected fish swirl/splash. It’s when you spook a large (4ft-5ft) tarpon right under the kayak that really sets the heart into motion. 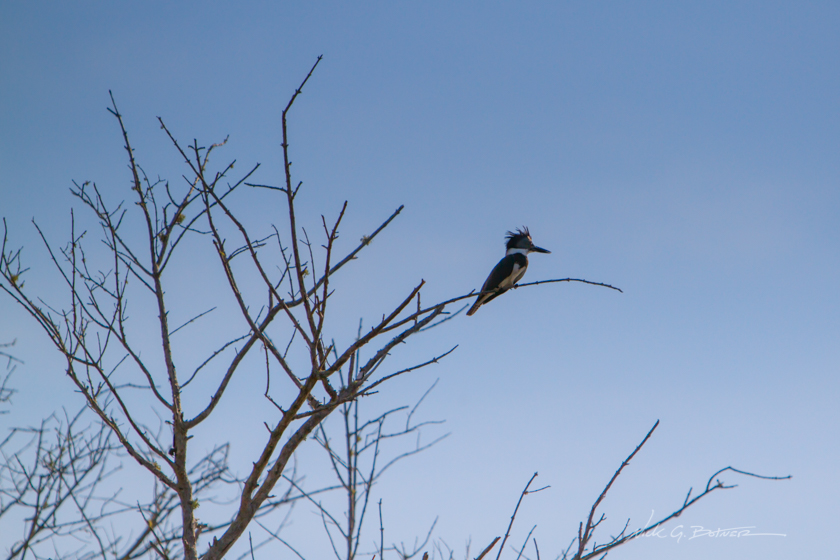 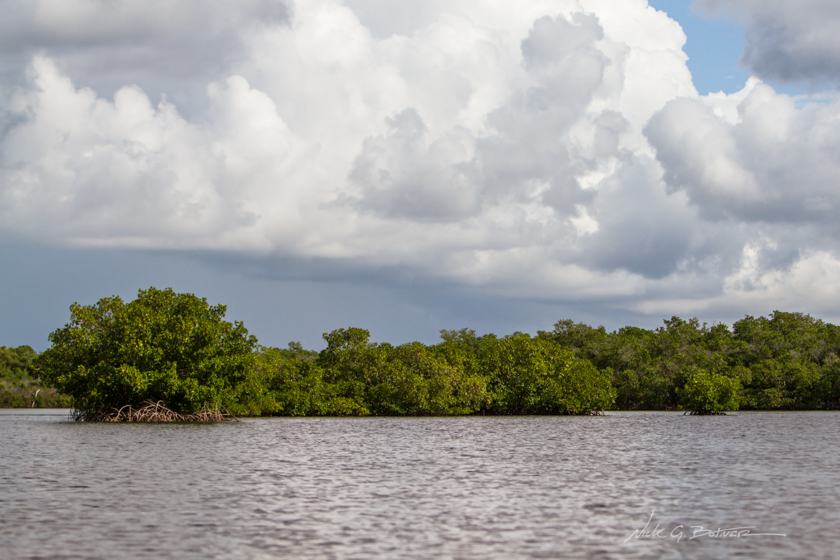 Halfway up the river, an early morning storm breaks out just north of me. 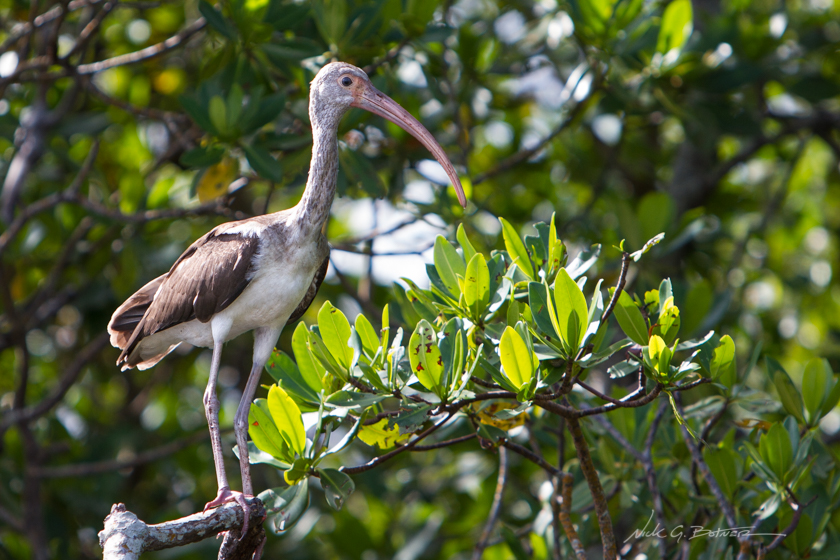 Juvenile white ibis, not the best looking bird, that’s for sure. 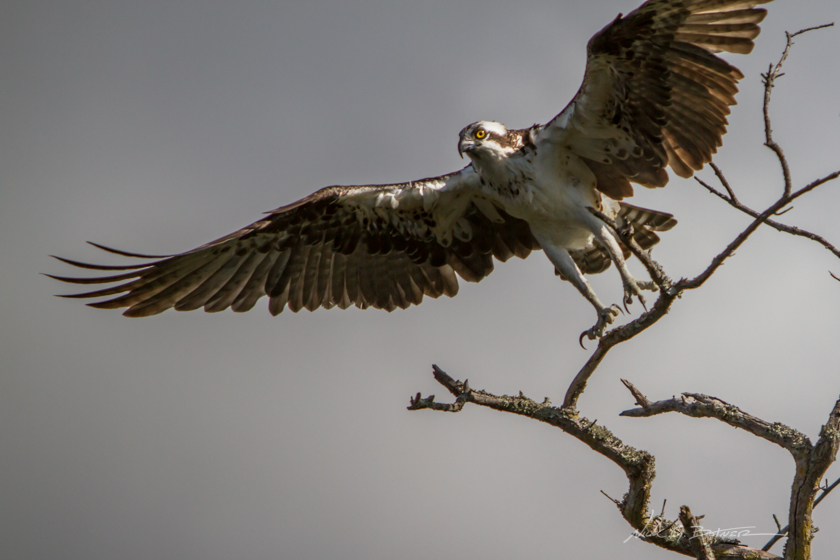 I was able to get surprisingly close to this osprey before he had enough with my strange paddling techniques. 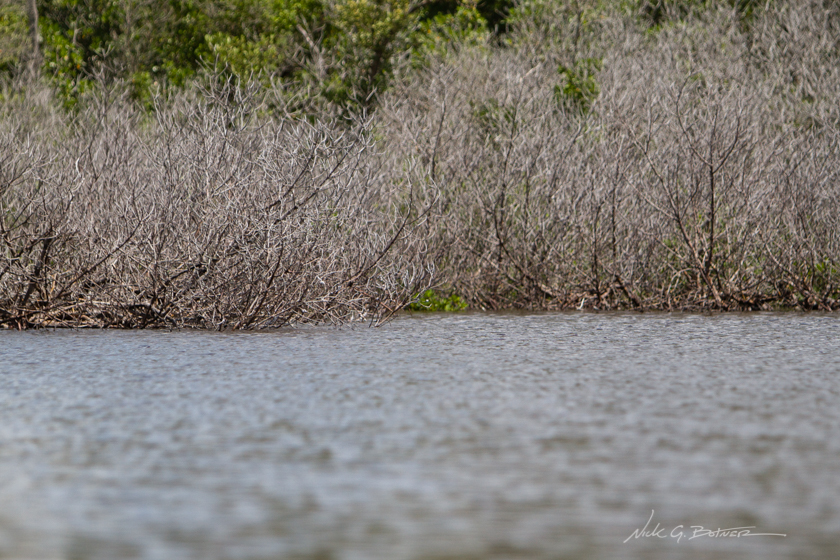 A few parts of the river were lined with dead plants. 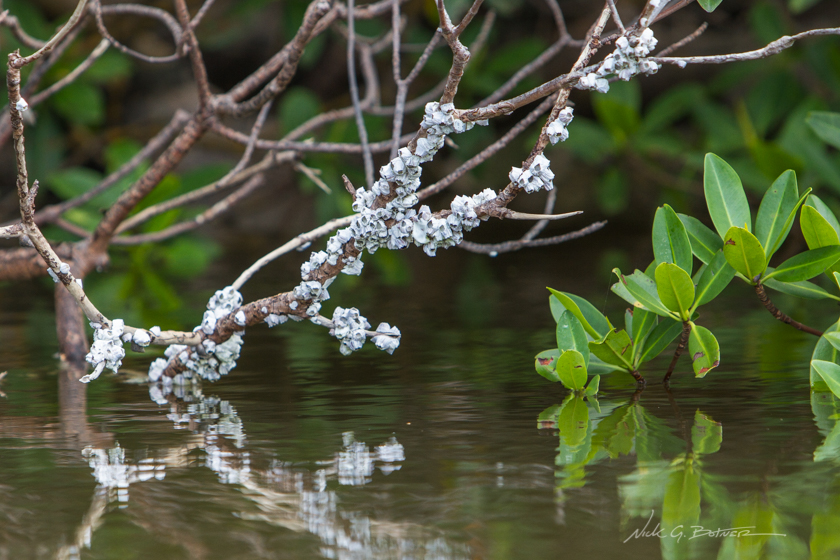 Dead barnacles that were once submerged, now hang dry even on a high tide. 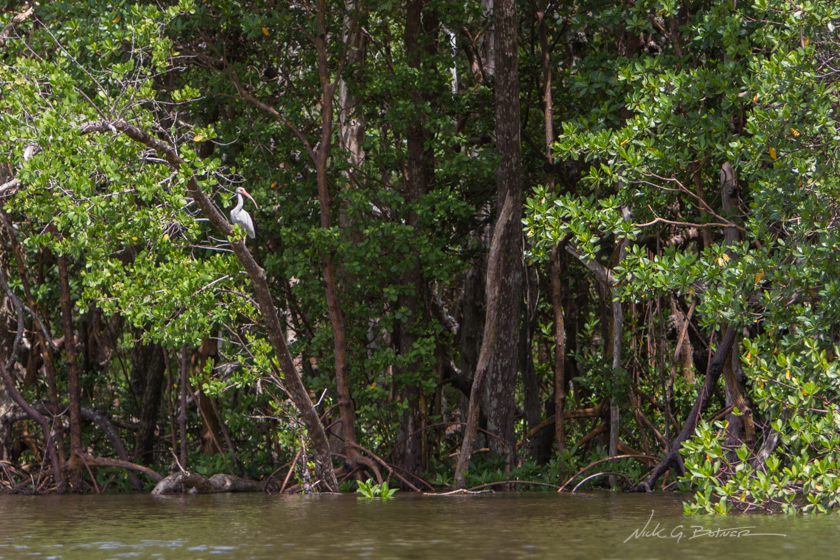 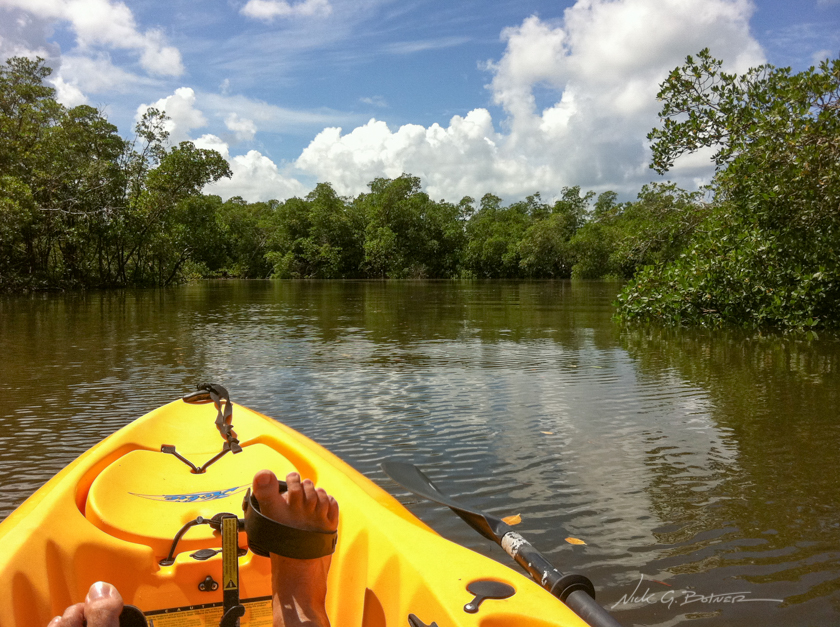 Even though this is taken with my phone, it’s a great shot that captures the serenity and peace I experienced that day. 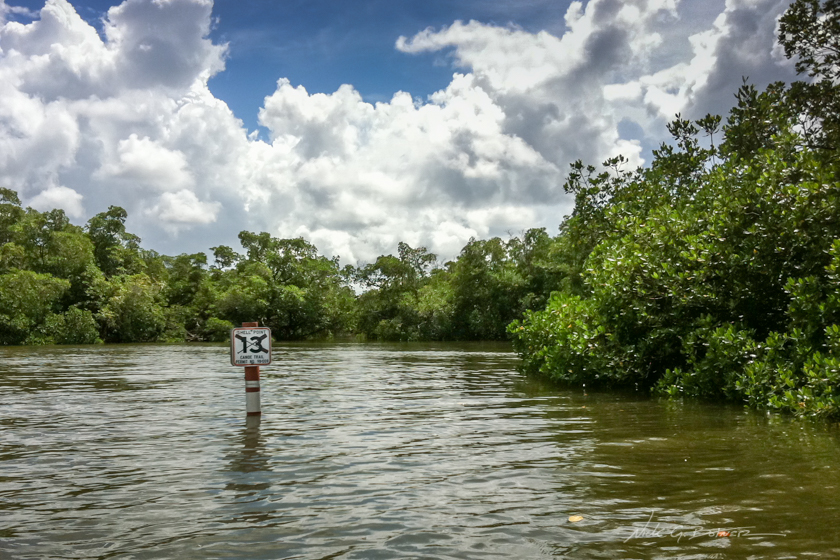 On the way back I decided to take the actual marked canoe trail. It’s a relatively short trail. But it takes you through some interesting little mangrove formations. Perfect for a slow moving canoe or quick family trip. 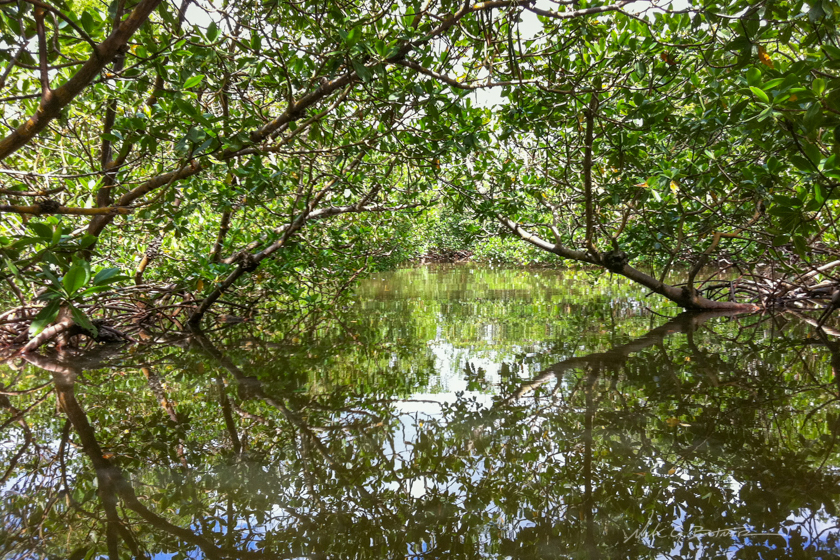 Some of the mangrove tunnels found on the marked trail. 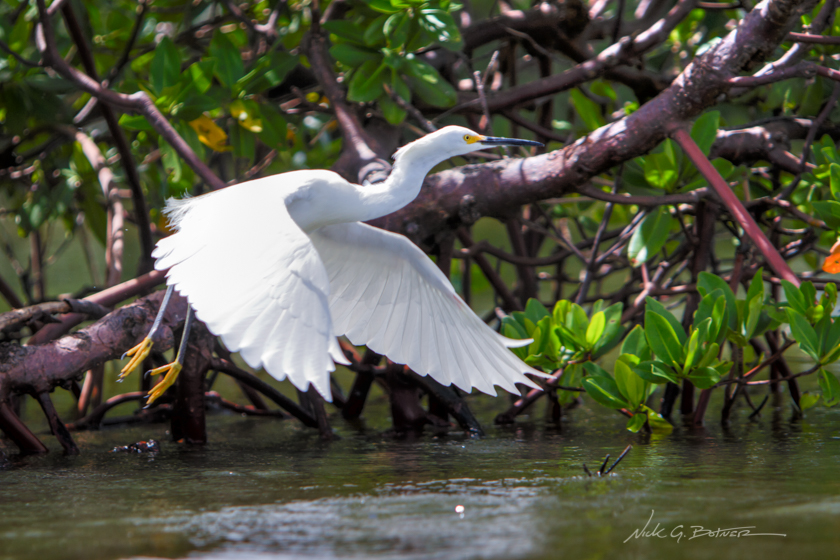 And finally on my return, a snowy egret watches post at the entrance of the lagoon.

This trip was roughly 8 hours and it covered about 15 miles of river. I spend a lot of time shooting photos and observing the wildlife. So someone with a faster pace could do this in 6 hours easily. Here’s a little map for those who are interested. There are tones of other rivers in the Rookery Bay area. I had always wanted to make it up to Sand Hill Bay, so that’s why I chose the route I did. 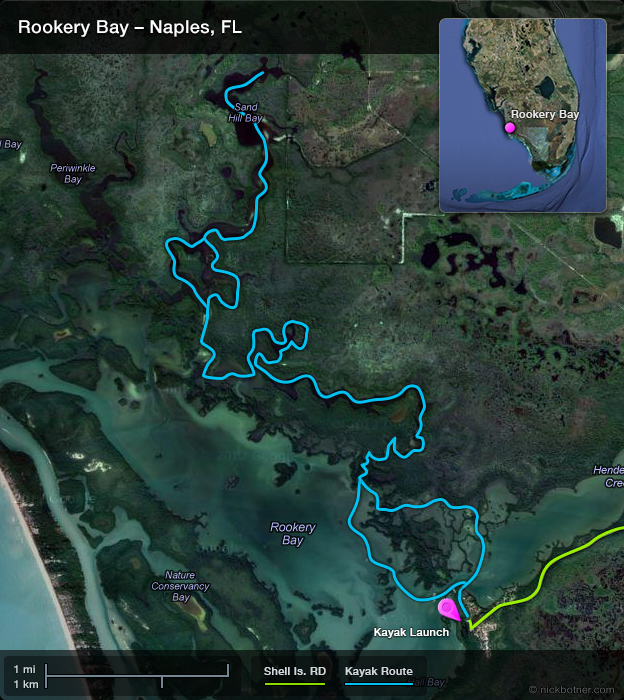 Thanks for reading/looking! Let me know if you found this useful and if you have any questions about planning your own Rookery Bay trip, I will be happy to answer them! 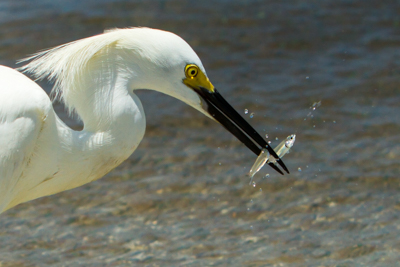