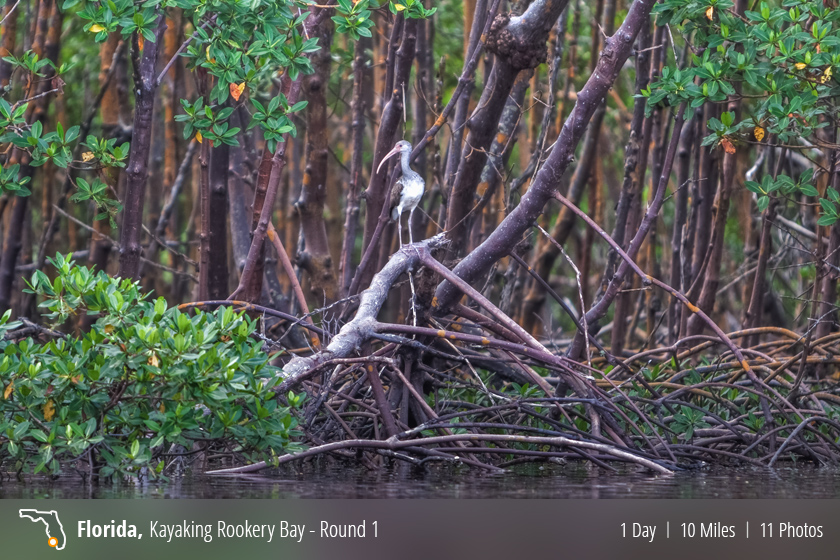 Having finally scored a Hobie Mirage Outback SUV kayak off of CraigsList, and equipped my car with Yakima roof rack system, I woke up at the but-crack of dawn and set out for Rookery Bay.

I must admit, bringing my camera on my maiden voyage might have been pushing it a bit. But to be honest, I wasn’t sure what was going to happen. It was a toss up between camera gear or fishing gear. Half the time I was happy I choose the camera and the other half I was cursing myself I left the fishing gear behind. 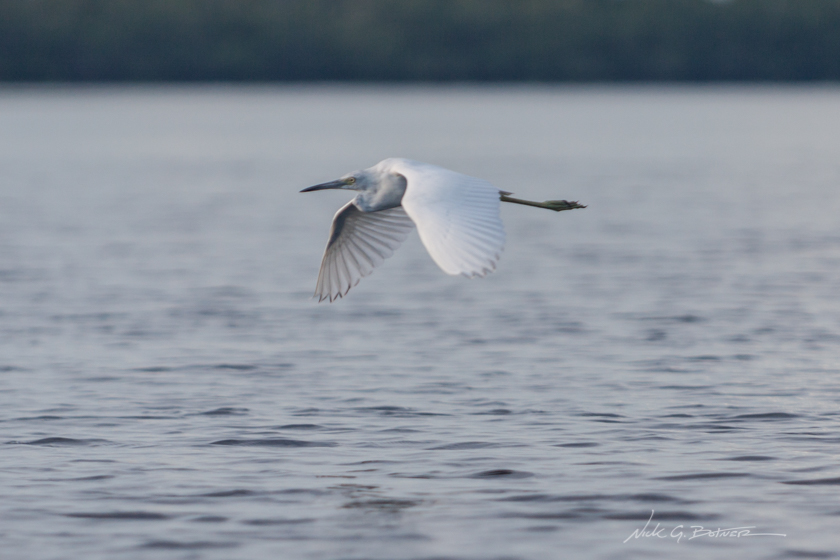 I believe I got into the water around 6:30am And right away there was quite a bit of action going on. 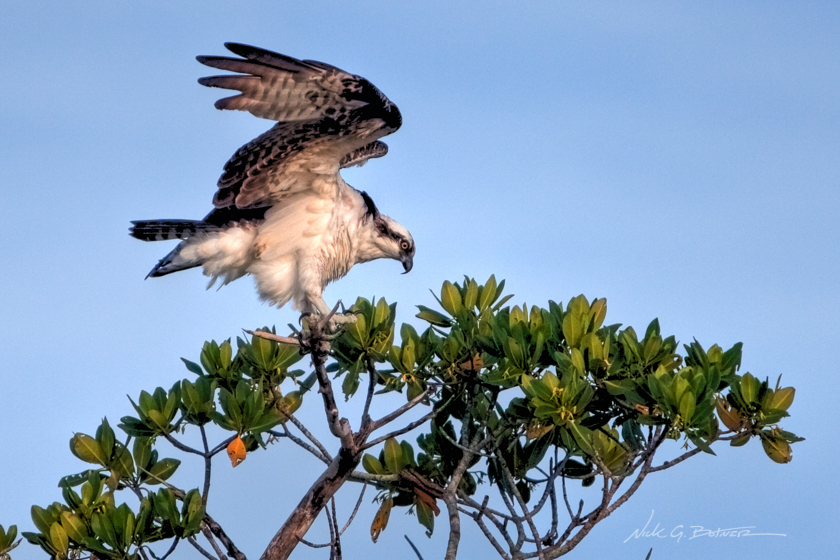 An osprey spreads it’s wings from the top of the mangroves as the rising sun starts to break the horizon. 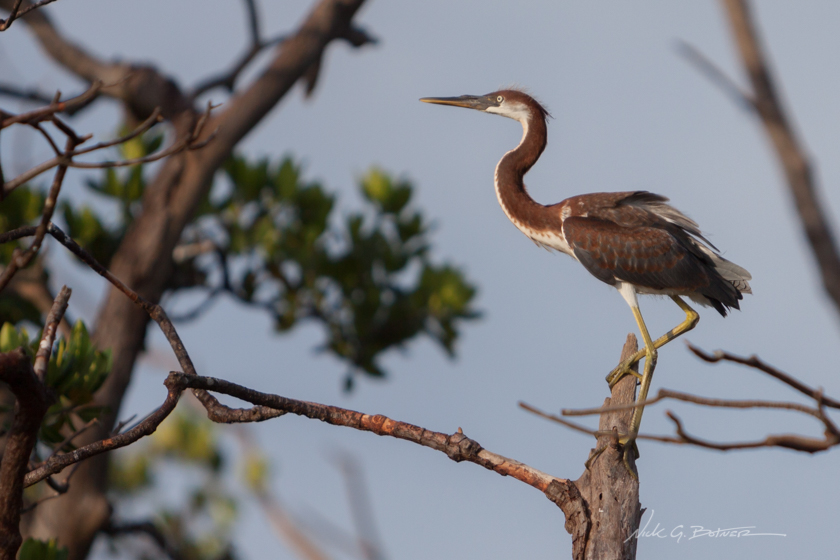 One of the mangrove islands was a booming nursery for the wading birds. There must have been 20 or so Juvenile Tri-Color Heron nesting out there. 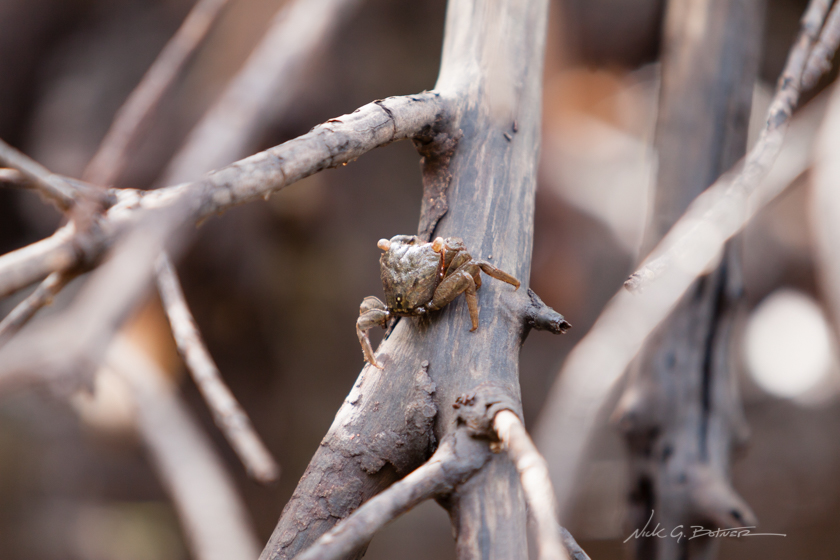 Armed with my iPhone and its Google Maps, I was able to navigate quite a few tiny passes tucked away in the estuary. Most of these small shallow passes were loaded with Mangrove Tree Crabs as they scurried up the roots to hide away from me. 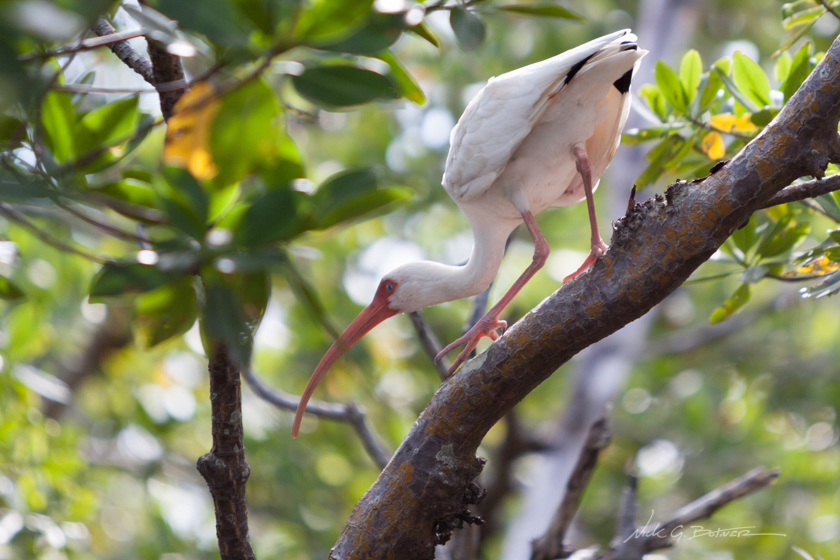 It’s a shame I blurred this shot. Would have been my favorite in the bunch if this White Ibis had just held still long enough for me to capture it. 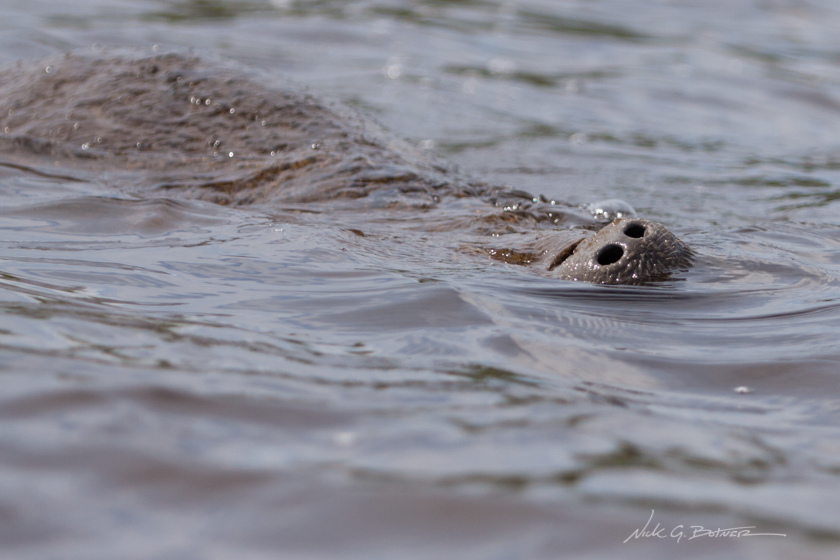 As I was cutting across one of the bays, I saw something off in the distance that caught my attention. It appeared to be moving, what ever it was it wasn’t just a floating log. It turned out to be an injured Manatee. I wasn’t sure what was wrong with it, I couldn’t see any prop marks on it. However, all it would do was float on its side and roll over every once in a while to get some air. 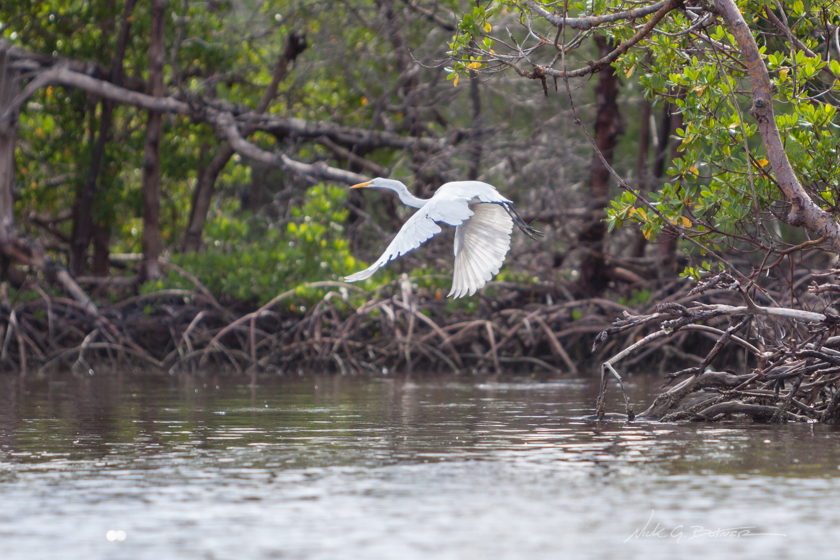 Great Egrets are “one” of the hardest birds to get a decent shot of. They do not let you get even remotely close, unless there is of course food. This is a typical, “I’m getting out of here because you and that giant yellow log you’re floating on looks like trouble” shot. 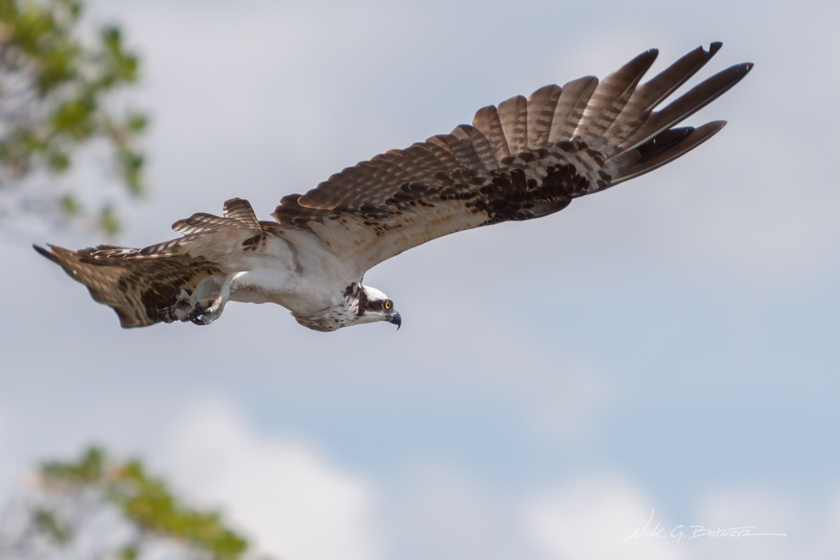 Ospreys on the other hand will let you get rather close before they take off. They tend to shake their head from side to side and puff up their feathers a bit to ward you off. But when they get tired of you, they just burst into flight. 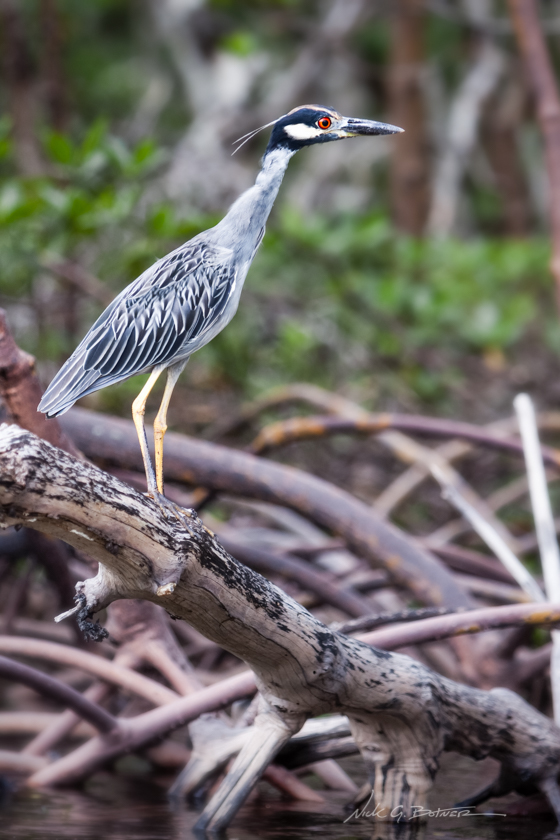 And then it happened, the highlight of my expedition. I was finally able to capture an image of a Yellow-crowned Night-heron. Usually a nocturnal bird, every time I come up on one, it’s by surprise. This guy was walking through the mangroves looking for something to eat. Now if I can just find one that doesn’t have its neck so extended! 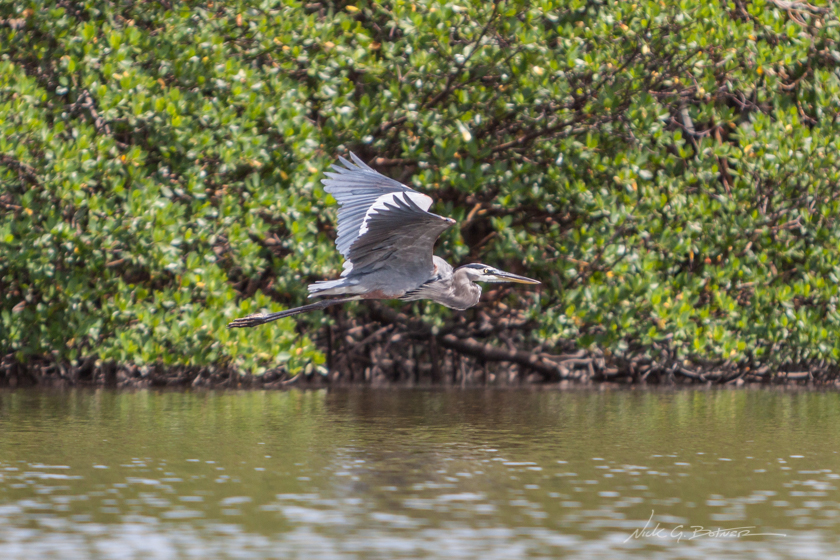 Here is the “other” bird it is near impossible to get close to. The Great Blue Heron always seems to hear and see you way before you see it. 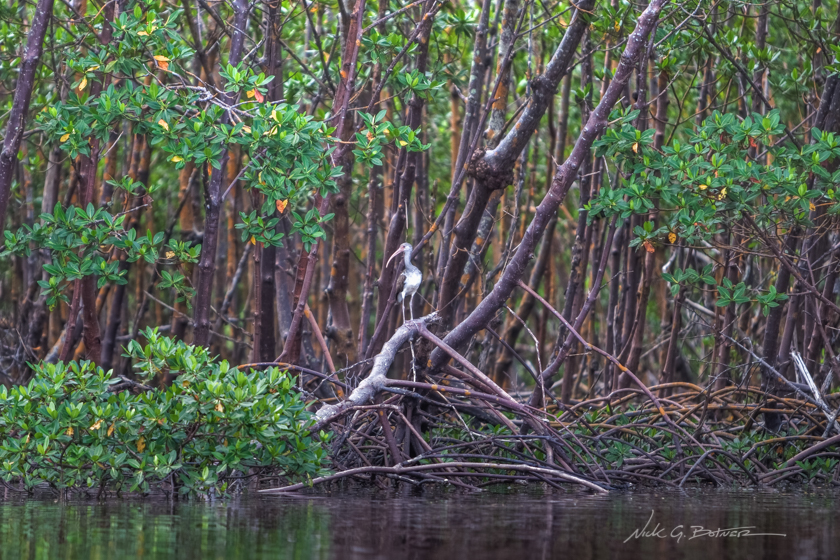 And finally, after spending six hours kayaking around in every nook and cranny I could find, I got this ending shot of a Juvenile White Ibis perched on the mangroves edge. While the bird itself isn’t much of a rarity here, I did like the depth of the shot where the orange mangroves fill the back of the shot.

Next expedition, I am sure it’s going to be another toss up between camera and rod. Well see.

Thanks for looking!
– Nick 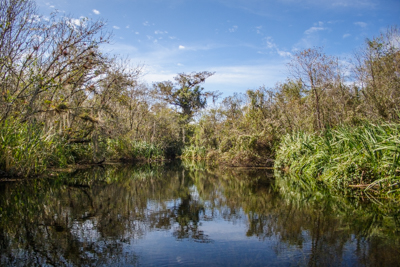