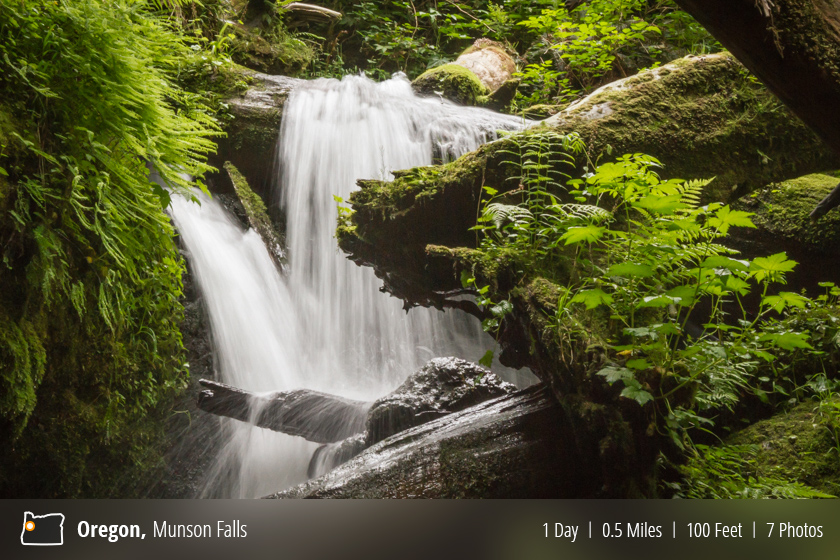 The other weekend I was heading back to Portland from a trip down south. I took a new route in hopes of saving some time. As I was driving through the back roads of Tillamook, I saw a small state park sign advertising Munson Creek Falls. Seeing as how the weather was overcast and rainy, maybe I could snag a few forest shots in this obscure locale?

Exiting the 101 and driving down Munson Creek Road for the first time almost feels like you might have made a mistake. As you pass through a pothole ridden farmland residence, you start to question what is really back here. Rusted cars and used baby transport systems line the road’s edge. At least someone was kind enough to mow “around” them.

Past the farm homes and into the forest, posted notices on the trees warn of the forest being watched for tree poachers. I can only imagine what it must be like to live a life of poaching trees.

However, as you make your way further into the forest, you end up crossing over the Munson Creek. It’s not spectacular by any means, but you get a sense that there might be something out here aside from rednecks and tree poachers.

As you pull into the parking lot, you will notice space is limited.  A couple picnic tables line the creek’s edge, making this feel more like a local rest stop than a State Park. But none of this really mattered to me at the time. Up until now, I’ve spent four hours in a car and I haven’t had the chance to get serious about photos all day. I find a little space and hop out, gearing up full suit to tackle whatever happens to be down that trail.

And what happened to be down this trail was a mob of senior citizens walking their Shih Tzus and Lhasa Apsos. Both coming and going, what the hell am I doing here?

You might be wondering why I am writing so much and not showing any pictures. Or you might have just scanned over my banter and headed to the photos anyways. 🙂  Well here’s the reason why. Not more than ten minutes down this trail, you are greeted with a distant view of the Munson Creek Falls. Which respectfully so, dumps water at a staggering height of 319 feet. Making it one of the highest waterfalls in the North West coast of Oregon. Unfortunately, it’s so covered in trees, taking a photo isn’t going to do it any justice.

Here is a link to some details and photos of the falls.

The reason the falls are so far away is because there is a border with a sign proclaiming “This trail is closed”,  which in Oregon means “Enter at your own risk”.

Having not had a single moment to take a photo all day, I was over that border quicker than I could think about it. 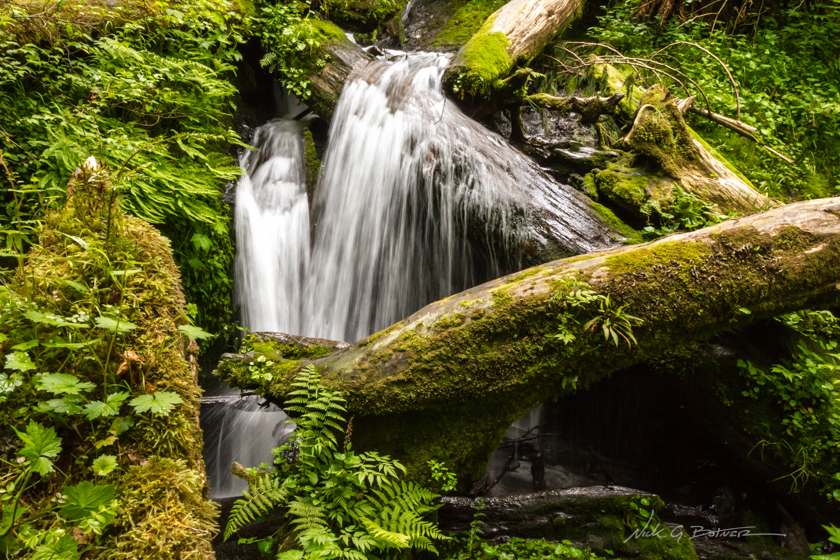 After crawling through narrow passages and crossing a portion of the creek, it became a little clearer as to why this trail was closed. There were fallen trees all over it. And I am not talking small trees, but massive ones. The shot above shows the creek pouring through all the fallen timber.

Determined to continue on. I was sure the trail was just out of reach. If only I could risk things a bit further, the rewards would pay off.

In order to make it to the other side. I shimmied my butt across a wet and slippery tree which had fallen over the river. Things were getting messy and I honestly didn’t care. This was going to happen. And that’s when I saw it… 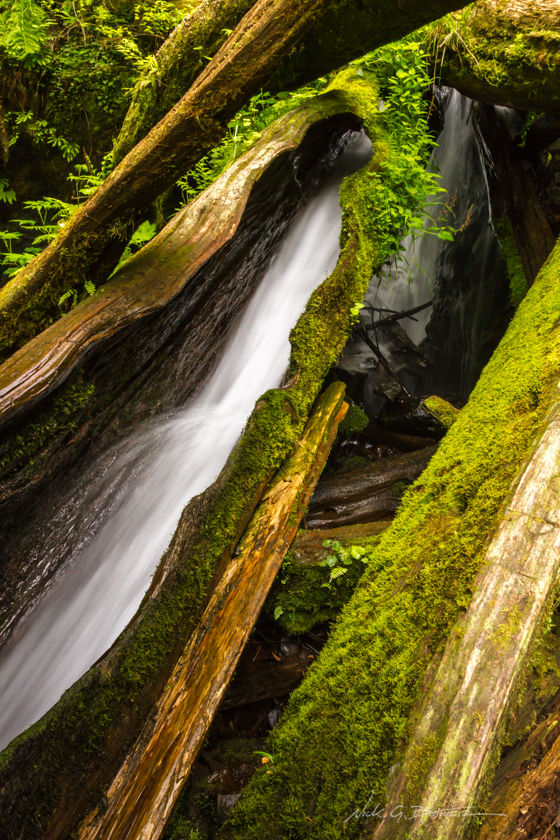 A tree. A tree with a waterfall running through it! 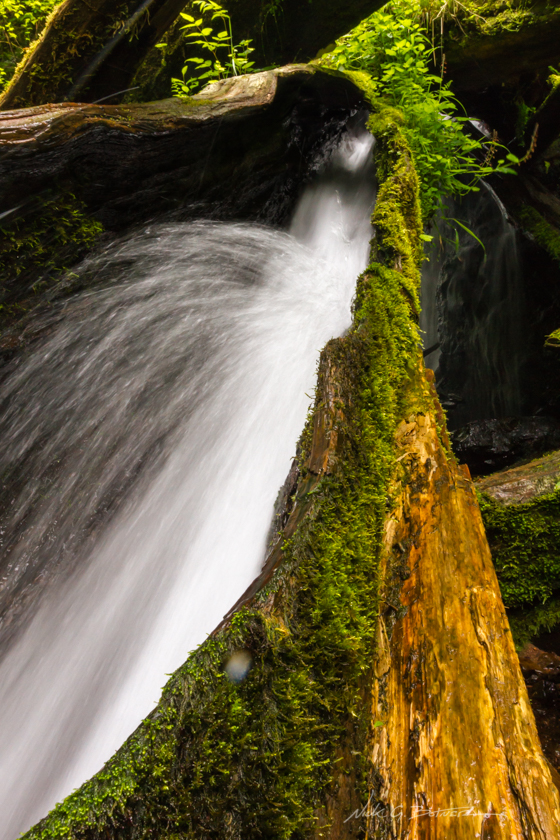 I don’t know if you can tell, but this is a big tree. About four feet in diameter big. And here is the creek, just ripping through it. 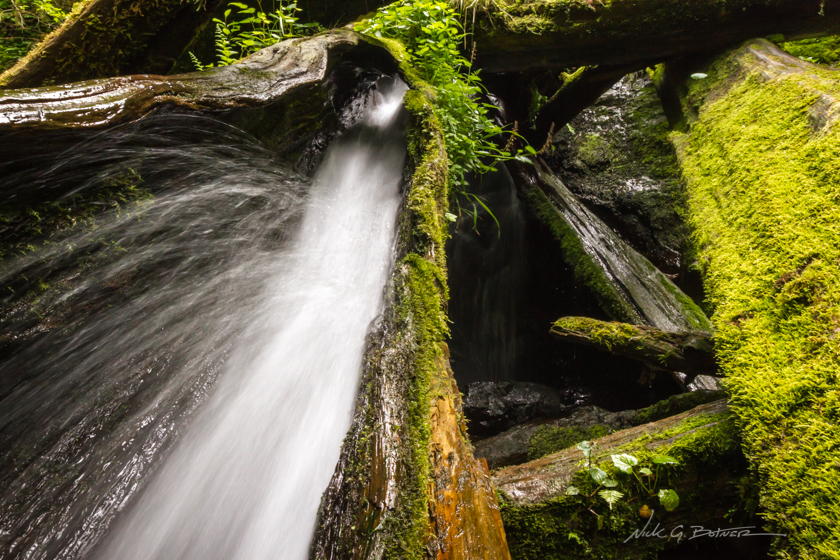 I got wet, my camera got wet, but this was what I had been looking for. Something I had never before seen. And it made all the hassle worth it. 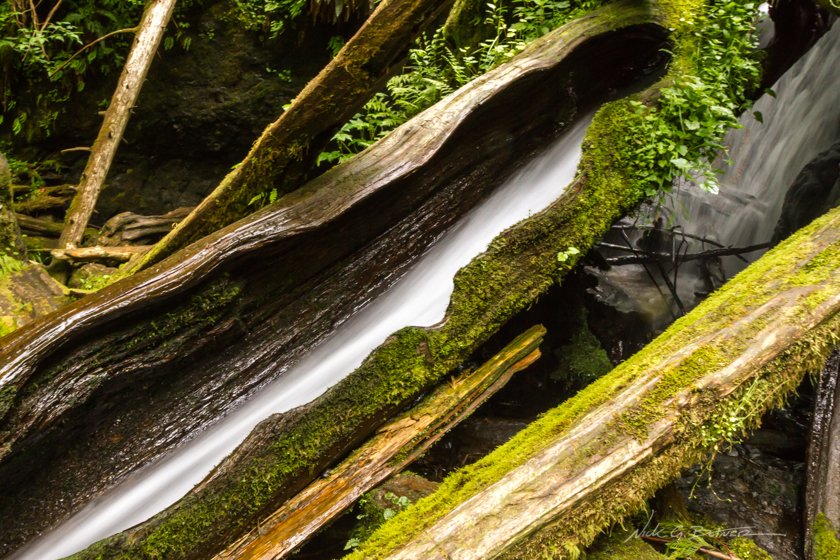 I did attempt to scale up the fallen trees in hopes of finding a trail. But without some serious cleats there was no way I was climbing up that mossy slip fest of danger and broken cameras/bones.

Having felt like I achieved what I was looking for, I shimmied my way back across the slippery logs of death and headed back to the car, wet and covered in tree mud. 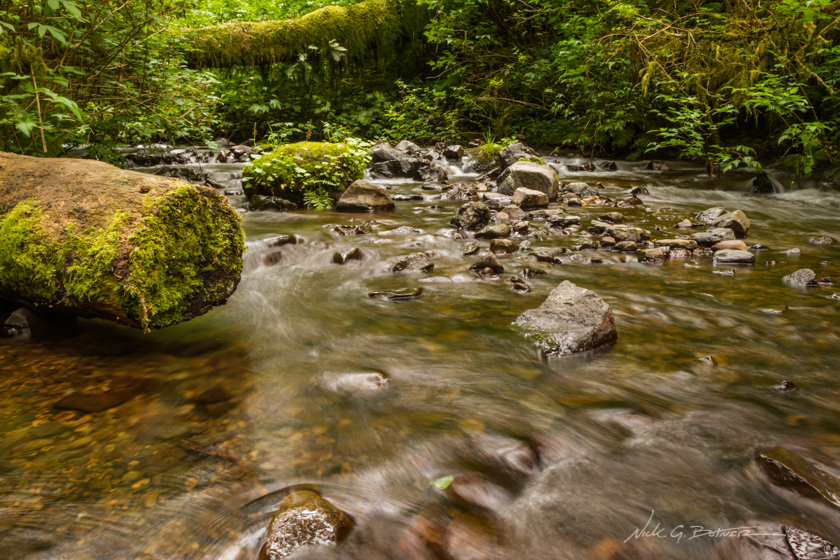 Back at the parking lot, I took a couple shots of the creek with as slow of a shutter as I could manage without blurring the surroundings. Having finished for the day, I turned around only to be surprised  by a pack of small filthy children. I wasn’t sure how they managed to sneak up on me, but they were silently watching my every move. Being out numbered, I worried that they might be the rogue gang of tree poachers. But as soon as I stood up and got out of their way they blasted past me to play in the creek’s edge. 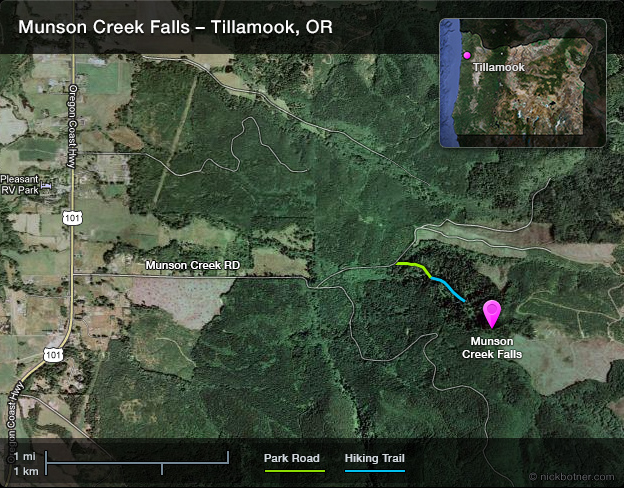 Here’s a little map and some technical details of today’s “adventure”. If you are planning on visiting Munson Creek Falls, it shouldn’t take you more than 30 minutes. And if you want to see the waterfall in a tree, bring some clothes you don’t mind getting dirty and some balance to make it across those slippery logs. 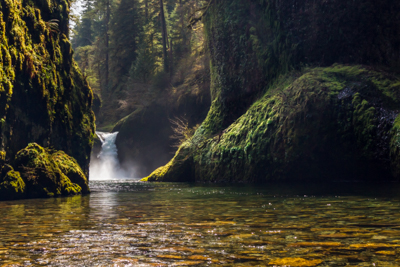