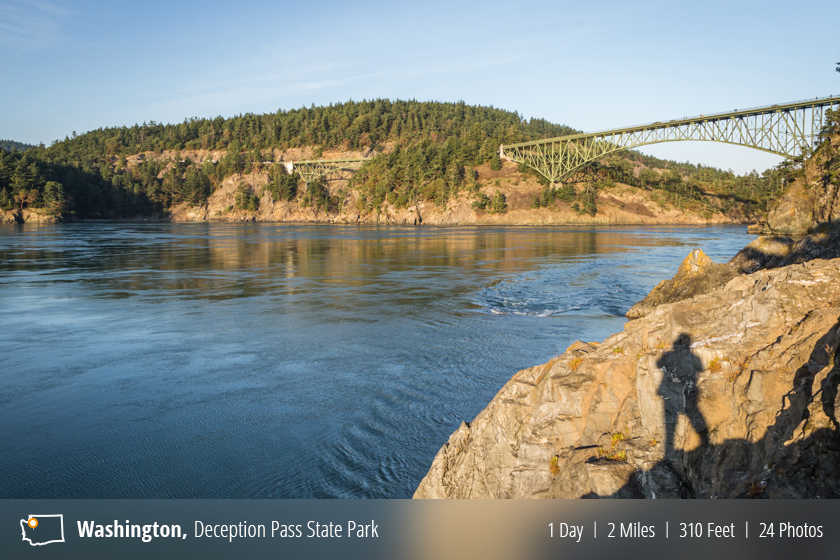 Just south of Anacortes, between Fidalgo and Whidbey Island, you’ll find Deception Pass State Park. I’ve never been up towards this part of Washington, so with the rare chance of a sunny day in the winter, I loaded up the car, left Seattle and started driving North.

I’ve herd of Anacortes before, but didn’t really know anything about it. I was really only headed that way because the road to get there looked rather interesting. Not only would I get to drive through scenic Whidbey Island, but I’d also get the chance to take my car on it’s first Washington ferry ride.

As I sat in my car waiting for the ferry to make it’s way across the Puget Sound, I loaded up the maps on my phone and started looking for state parks (I was really looking for the highest concentration of geocaches in a park). I had originally picked out Washington Park on Fidalgo Island. But as things took longer than expected, I decided I would make the most of the remaining sunset at Deception Pass. Actually, it was the name that really drew me in. With a name like that, there has to be something good about it. 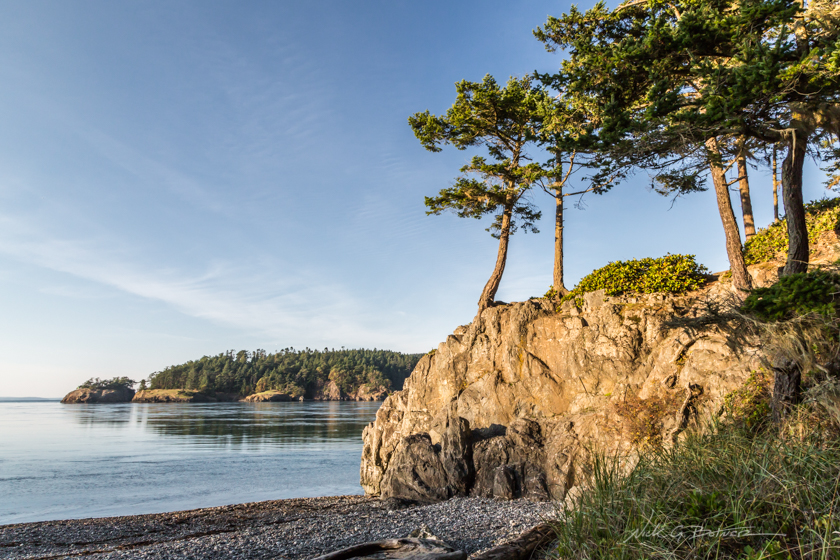 And boy was I glad I did. When I finally made my way to the waters edge I was greeted with sunset glowing rocks and low tides. 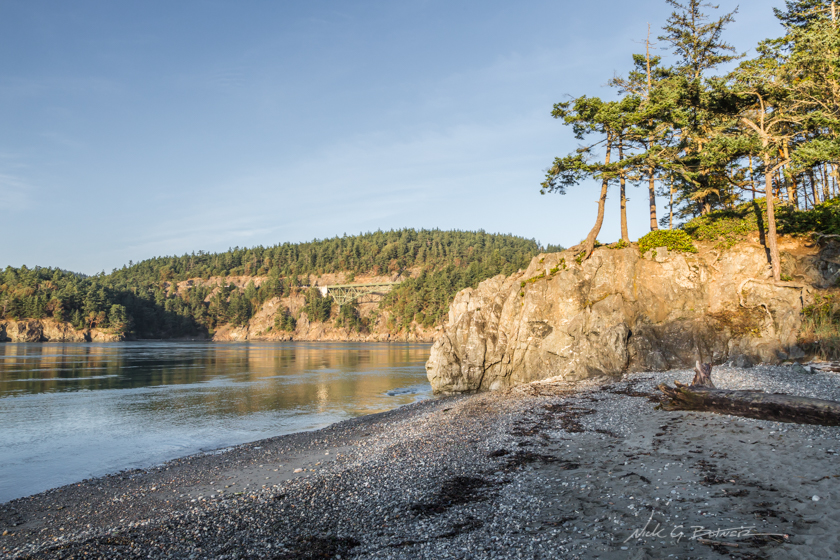 Even with all this beauty, I was really 30 minutes late. The tree line shadows were starting to cover up some good structures. So unfortunately I had to double-time things a bit and do my explore-n-shoot faster than what I wanted to. 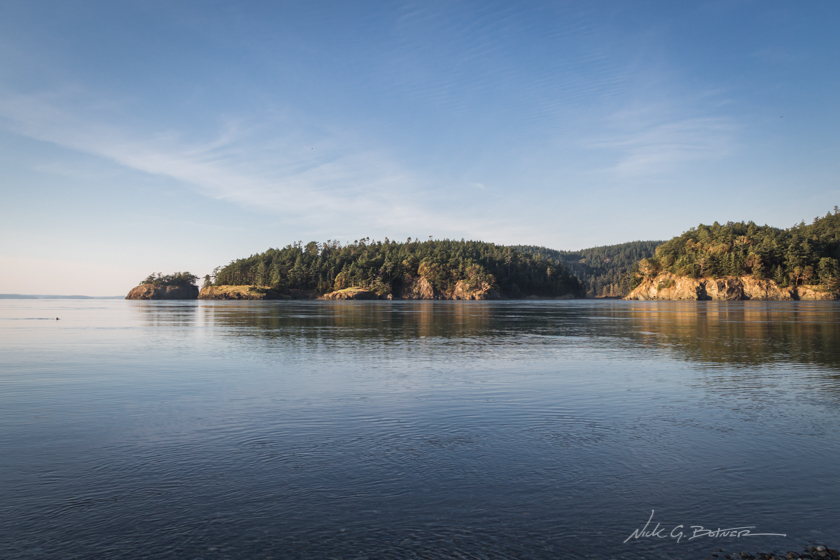 Looking north across the pass, Lottie Bay looks so peaceful. 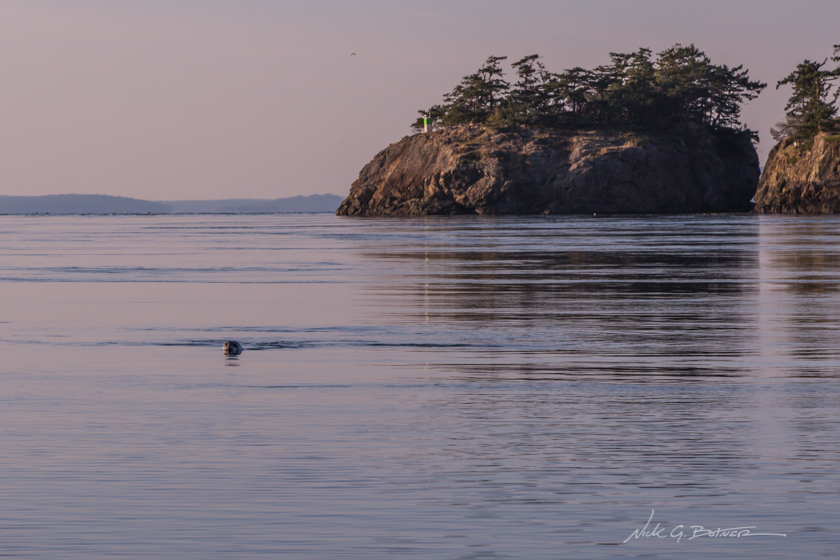 I wanted another angle, so as I crouched close to the waters edge I saw this seal making its way right towards me. I wasn’t sure how close it was going to get, but it eventually ducked back under. Disappointed, I was sure my nature calls were going to toll it all the way to my camera’s lens. 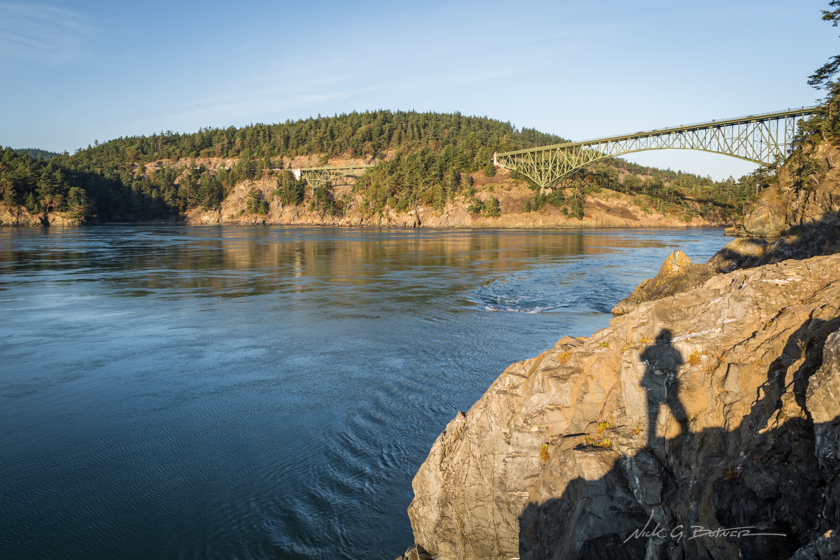 Half way up the beach there’s another set of large rocks. Perfect for climbing up and getting a decent shot of the Deception Pass Bridge.

In this photo, the current on the shore is ripping inwards. Making you think that the tide is going in. However, if you looked out into the middle of the channel, where the seals were swimming, it was obvious that the tide was actually going out, at an extremely fast rate. How deceiving. 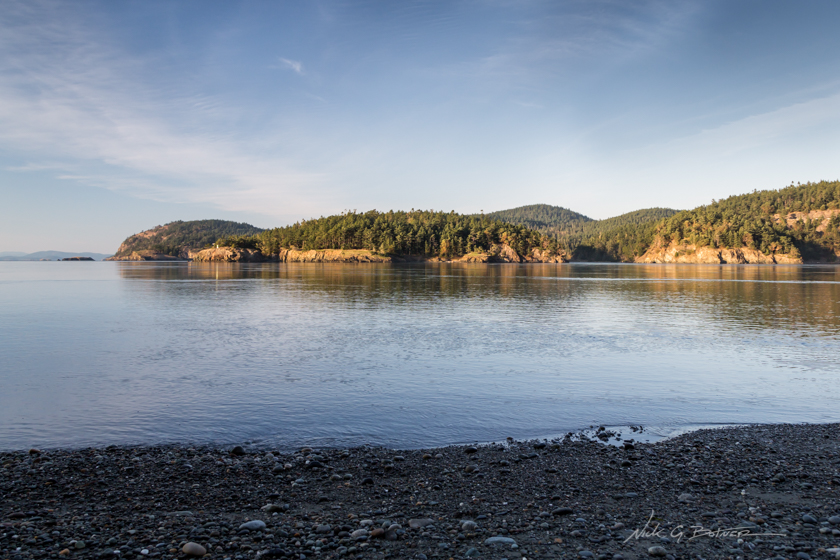 Meanwhile, other parts of the pass make it look like the water isn’t even moving at all. 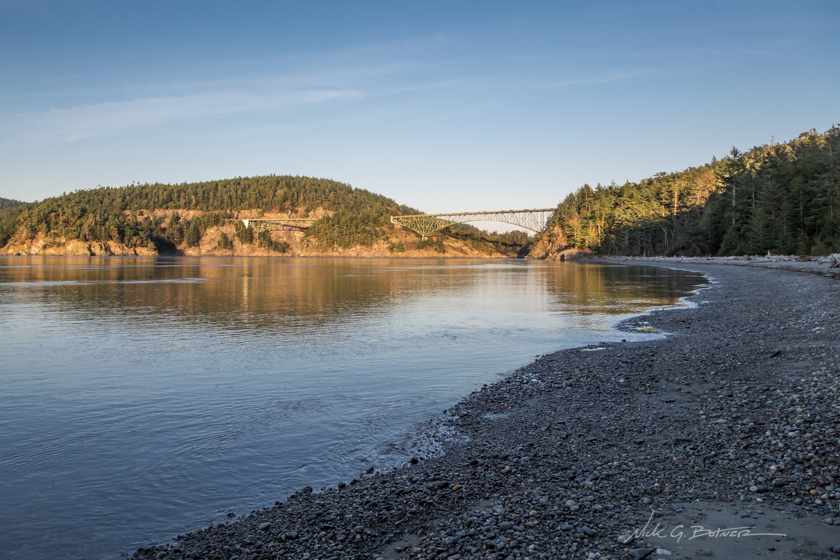 Almost to the cape’s edge, looking back at Deception Pass Bridge you can see where Pass Island separates the bridge structure into two pieces. 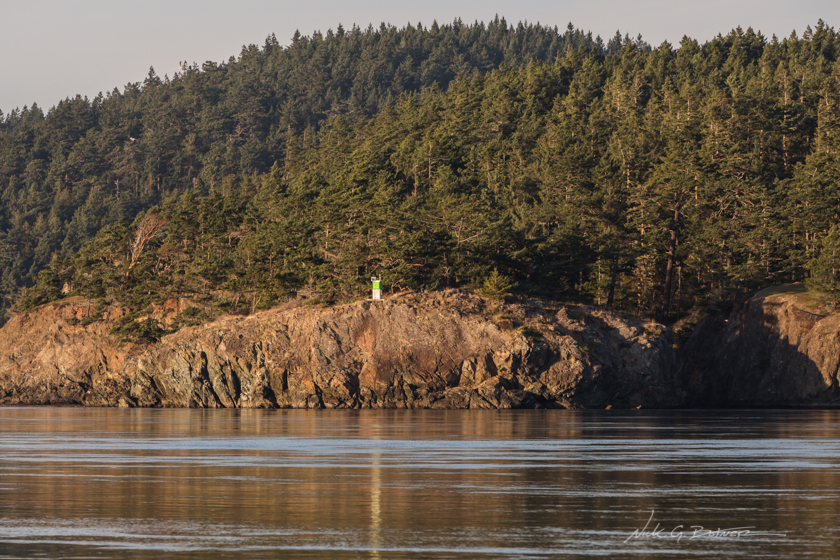 On the other side of the pass, a green channel marker sits atop the rocks, directing boats towards the safer body of water. 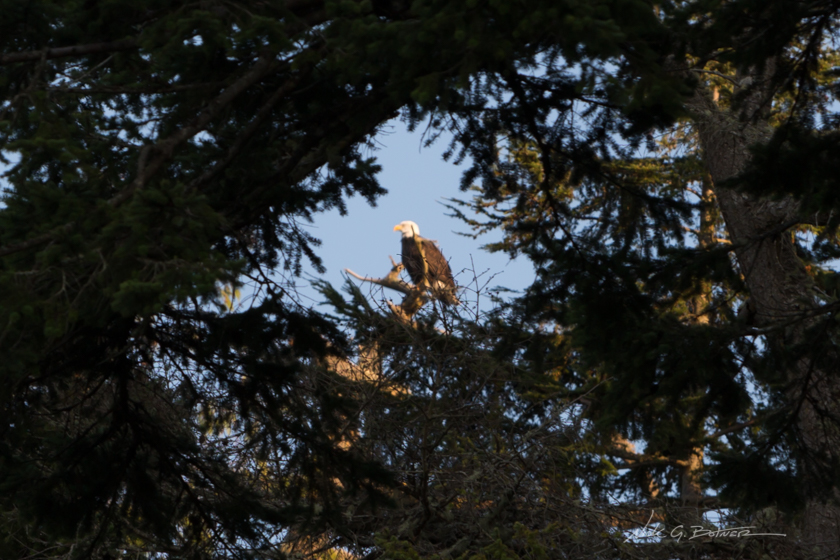 Right after I took the channel marker shot, this Bald Eagle flew directly overhead and out into the pass. It was continuously harassed by two seagulls before making its way back to the treeline. Unfortunately, none of those photos came out. 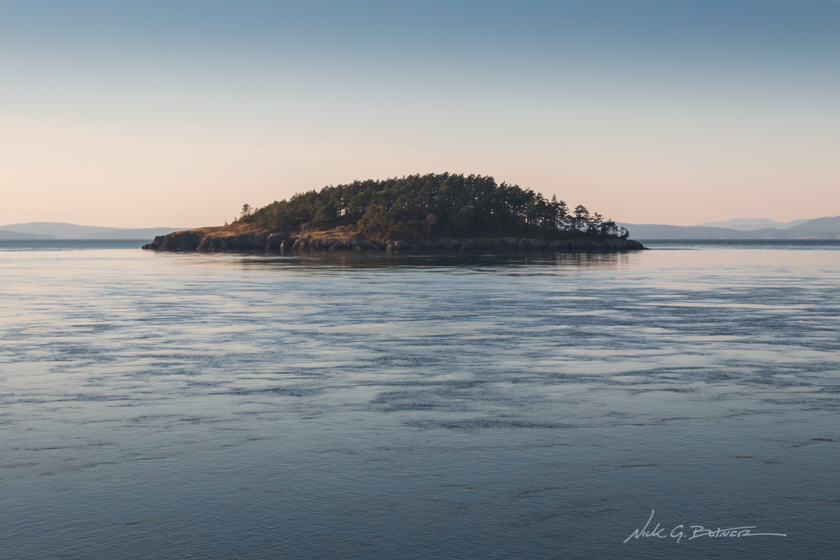 Deception Island. Such a great name for a book. 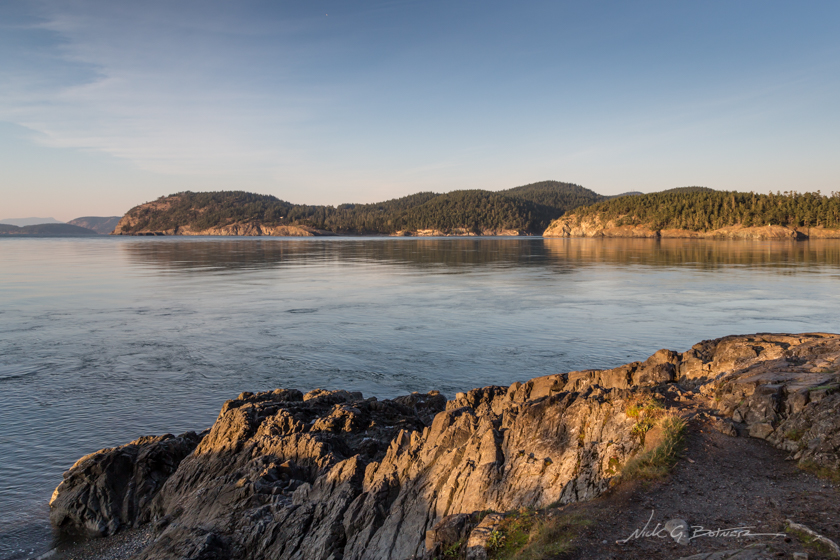 Almost to the main beach, looking back across the pass at Sharpe Cove with the entrance to Bowman Bay. 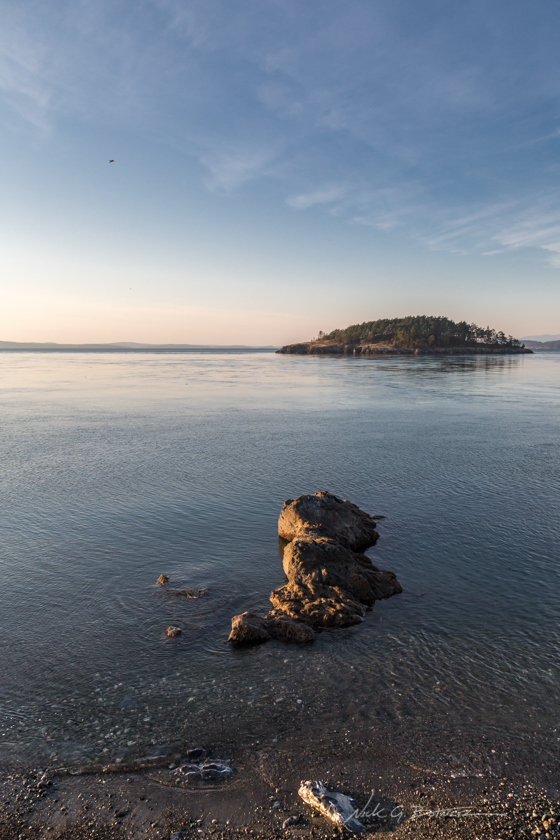 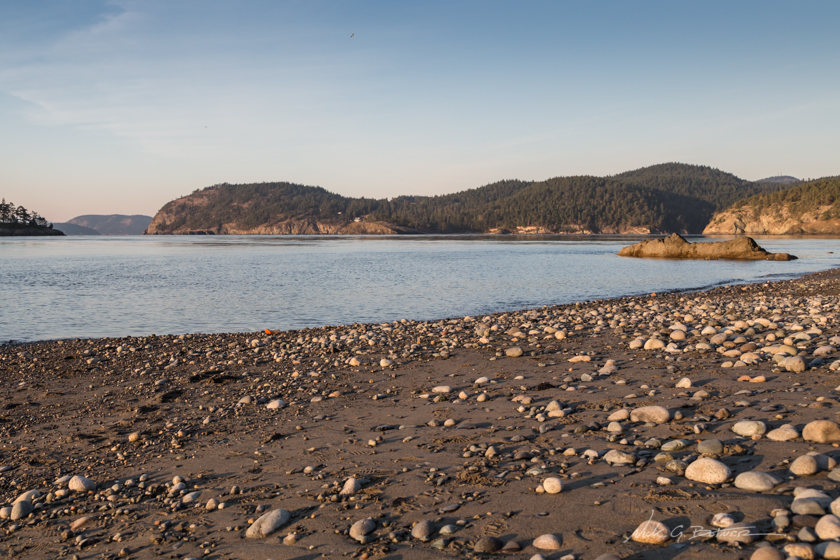 Finally, out on the main shore, the only real shots I could get were looking back at the pass. The rest of the beach was loaded with visitors. Somehow I was lucky enough to get this shot in between the groups of people walking up and down the beach waiting for the sunset. 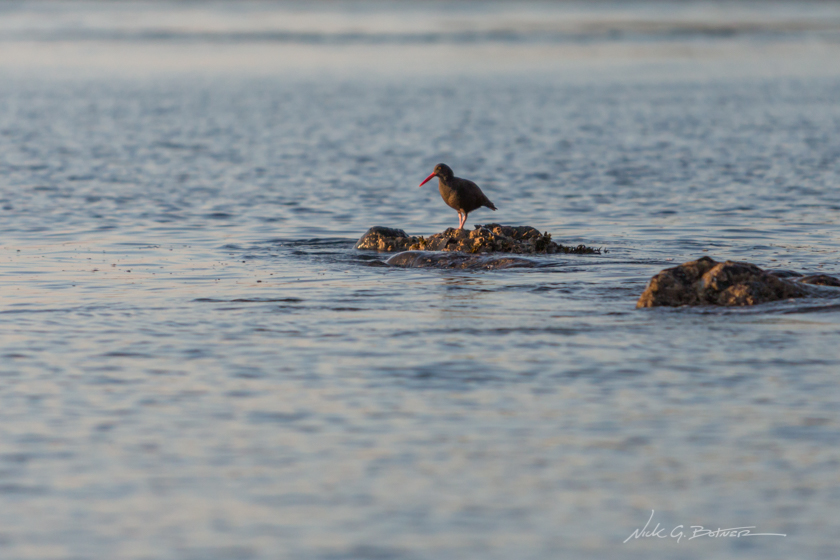 I did get to see my first Black Oystercatcher! Unfortunately I didn’t have the extension for my telephoto lens. So this was as close as I could get. 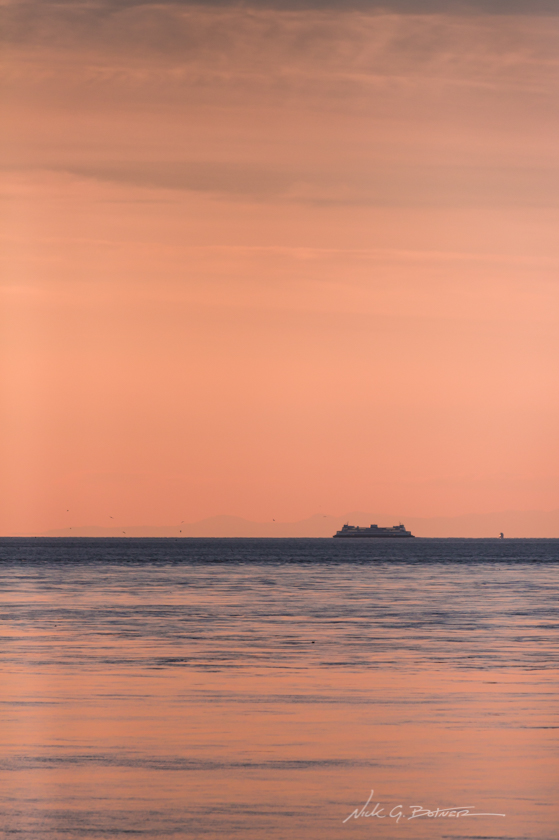 As the sun begins to set, a ferry departs Victoria BC and heads for Port Angeles, WA. 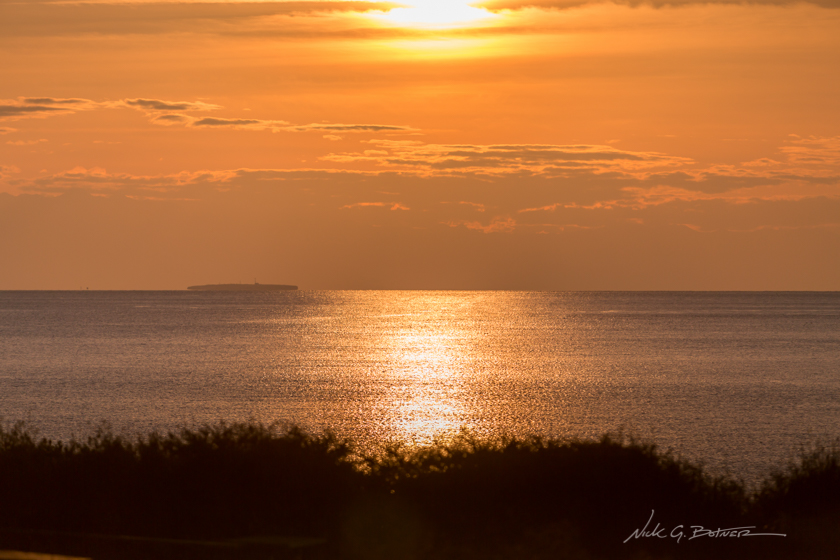 A golden sunset over Puget Sound with Smith Island in the distance.

As more people began to flood the beach, all hurrying to not miss the sunset, I had to make the decision to do the opposite. I reluctantly made the call to be safe and head back before things got too dark. 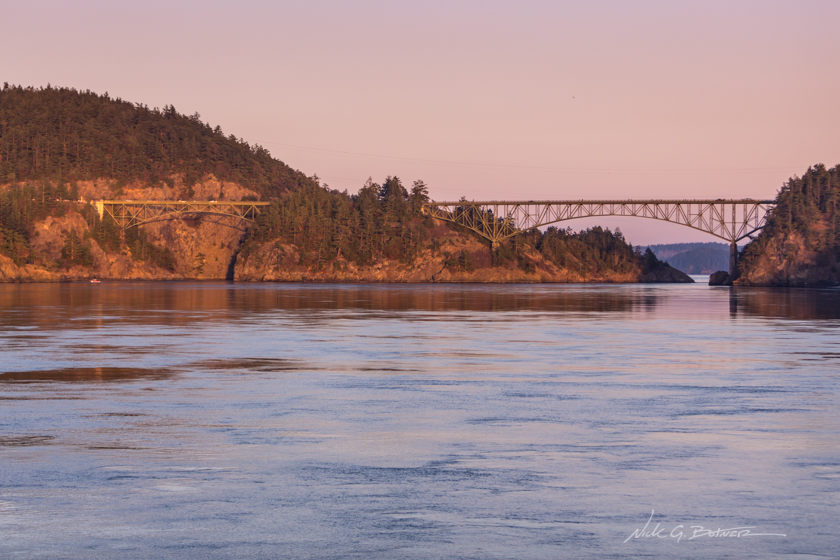 And even while I constantly questioned my choices. I was given colors and sights I would have not seen if I had stayed.

This shot came out a little weird. The bridge looks blurry, however it’s just how close the rafters are to one another. 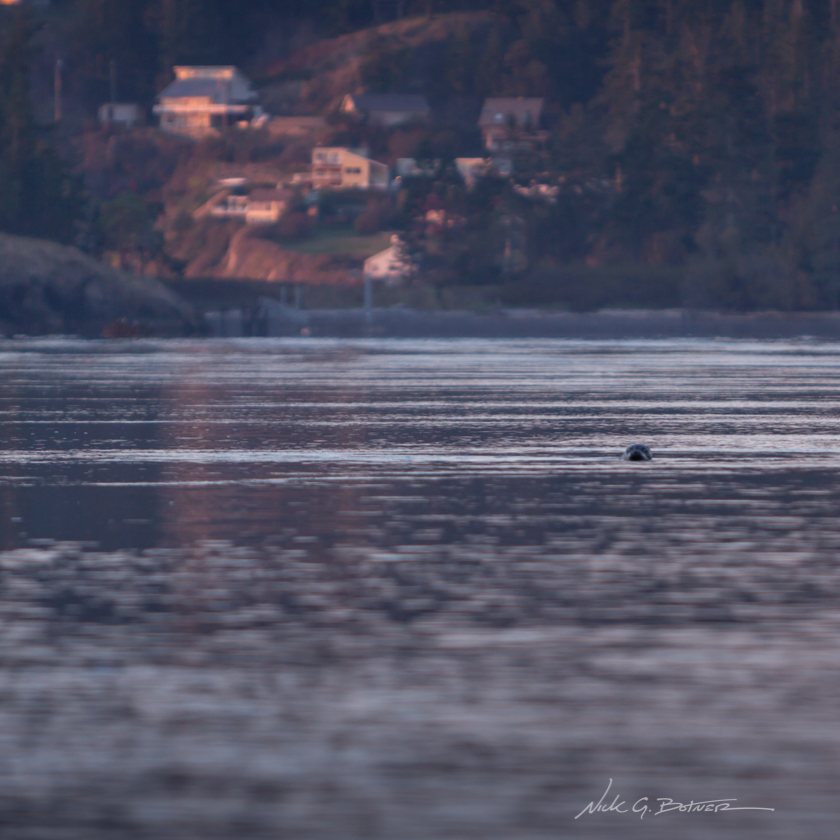 The seals were still out there. Diving and fishing. Getting taken out with the current and then swimming topside to makeup for the ground they lost. 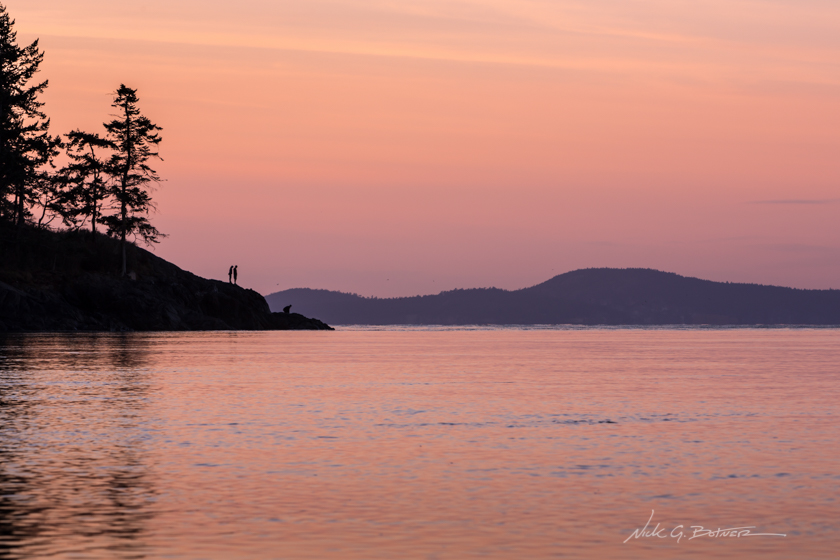 As I looked back again at the setting sun, I started to realize that I might have made the better decision. 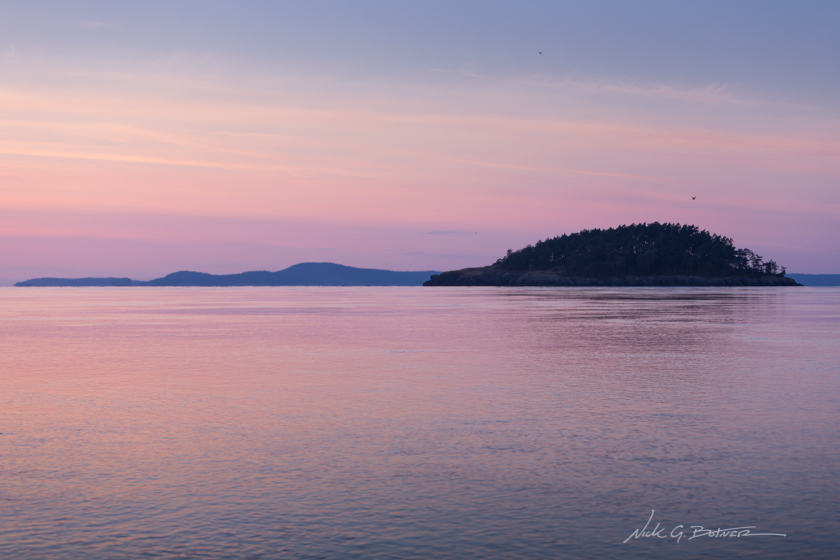 The whole sky was turning from orange to purple. I don’t think I’ve seen such colors before. 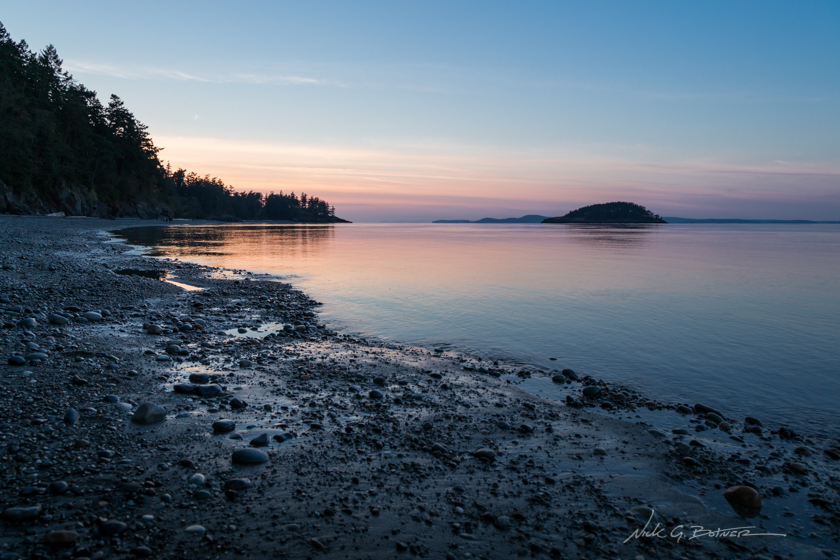 It wasn’t until I was almost back to the car that I once again turned around and realized I had made an amazing decision. 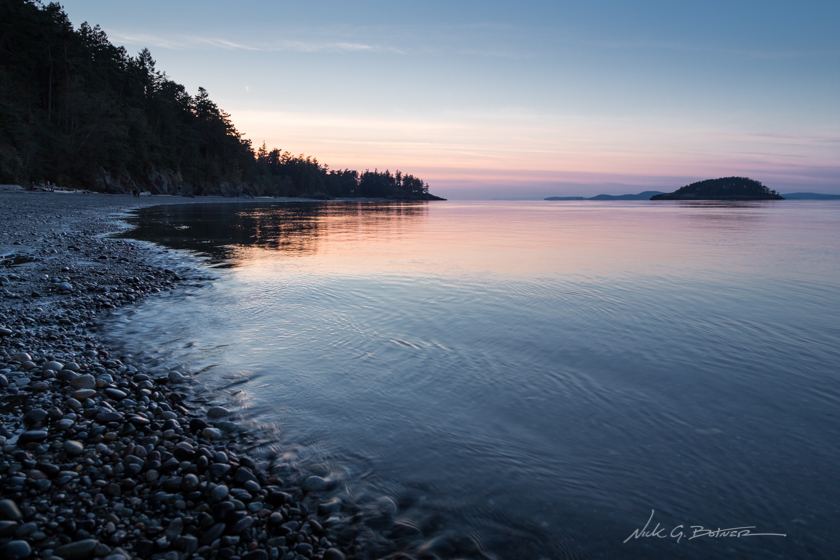 If I had stayed on the beaches edge, with the rest of the people watching the ball drop, all I would have had was a few cloudy orange photos over a blank horizon. Instead I walked away with some of the most beautiful Pacific Northwest photos I have ever taken. This shot above is my new desktop image. 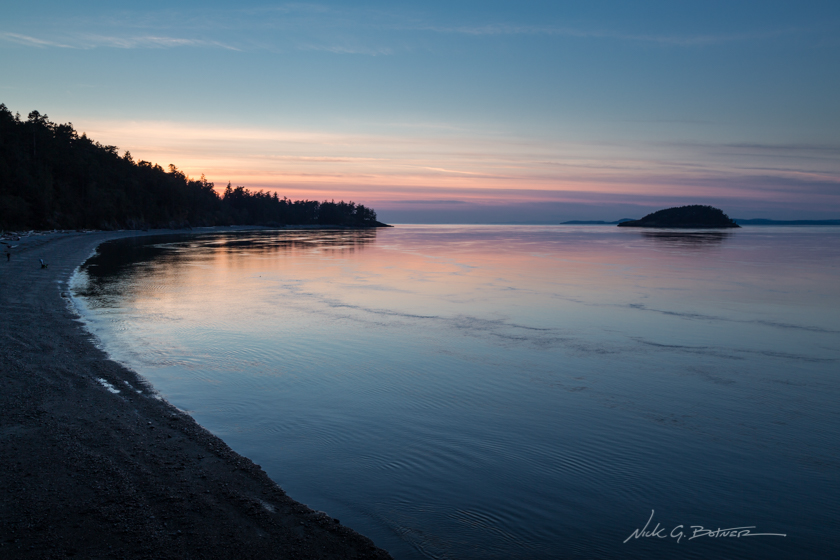 Back at the access point, I hopped up the large rocks and took a couple more photos just to try to encapsulate the experience. 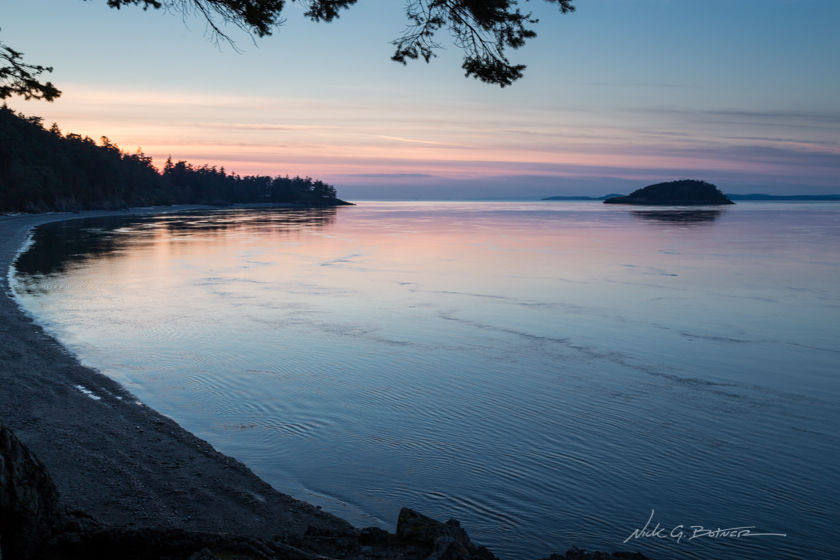 I’m not sure if adding a little bit of the tree I was under into the shot works or not. But the view is just too good to leave it out. I also noticed you can see a seal swimming towards camera in this shot.

Off the beach and walking back to the car, things were a bit darker. Thankfully it was still light enough to see. But it was definitely one of those moments I did not want to be out alone in the enclosing darkness.

When I made it back to my car, there were a couple cars still there. But the people I saw back on the beach had dogs and other people to help protect them from any troubles. So I loaded up right quick and plotted a course along the mainland to get home as soon as I could. The view had turned to night and I knew there would be traffic waiting for me as I re-entered Seattle.

Now that I’m back in the studio and have had some time to research the park and its surrounding landmarks. It turns out that this little hike I went on is part of the Pacific Northwest Trail. That would explain quite a few of the happy foreigners I saw back on the beach in their camping gear. Reminded me of when I was hiking Mt Hood on the Pacific Crest Trail. That time it was getting late, I was headed in from a day of hiking and here were these jolly Europeans just setting out on the trail. More on that adventure next time. 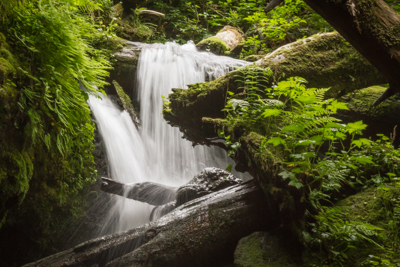