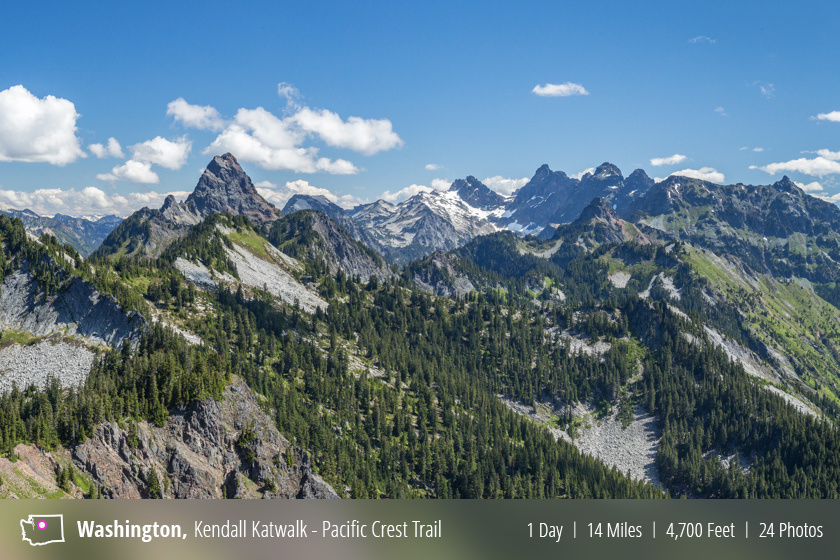 There is a little know secret hiding along the trail of one of the more popular trails. And all it’s going to take is a bit of scrambling to make your way to the top.

While reading about hikes close to Seattle, I saw the Kendall Katwalk mentioned. So I did a bit more research and decided we should give this one a go. I mentioned it to my girlfriend, Jen and she too had heard it mentioned a few times.

One of the things we had heard about this hike is how crowded the trailhead parking lot gets, as with most hikes within one hour of Seattle. So we loaded up the car and made our way to the trailhead by 8am.

Even at 8am, I would say the lot was half full. There must have been 40 or so cars ahead of us on a brisk Saturday morning. Keep in mind, this is also a Pacific Crest Trailhead, so there is going to be a bit more interest in the hike.

After registering at the trailhead we made our way into the forest. It was surprisingly chilly, and I was hoping to break out of the trees sooner than later. But you will not leave the forest until you have made roughly 4 miles through it. It’s a nice little jaunt, but the real fun doesn’t start till you get above that treeline. 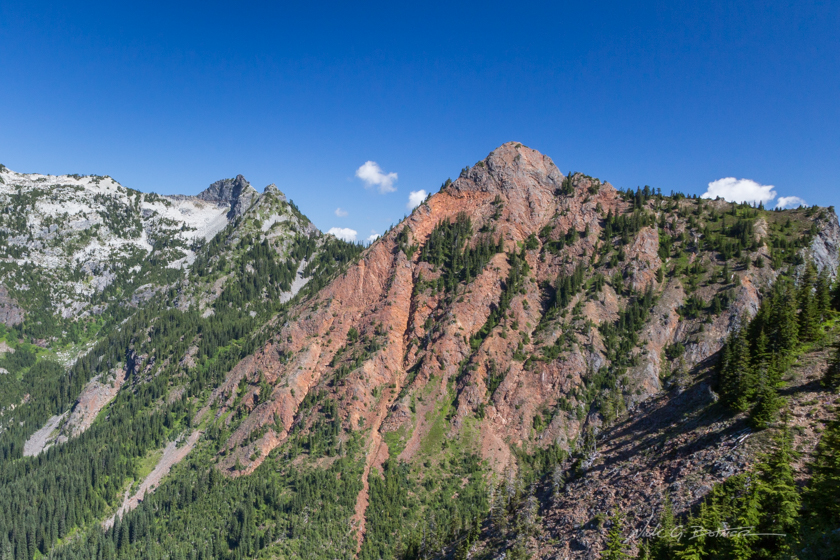 Once you are out of the trees, at the end of a switch back is a little boot trail through a clump of trees. If you take this, you will get some nice views of Red Mountain. 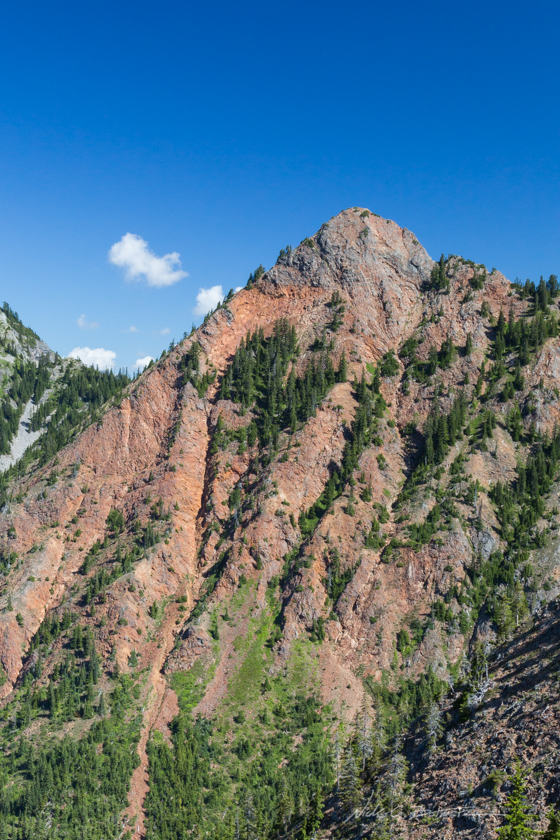 I was getting a little desperate for views, so Red Mountain was quite welcomed at this point. 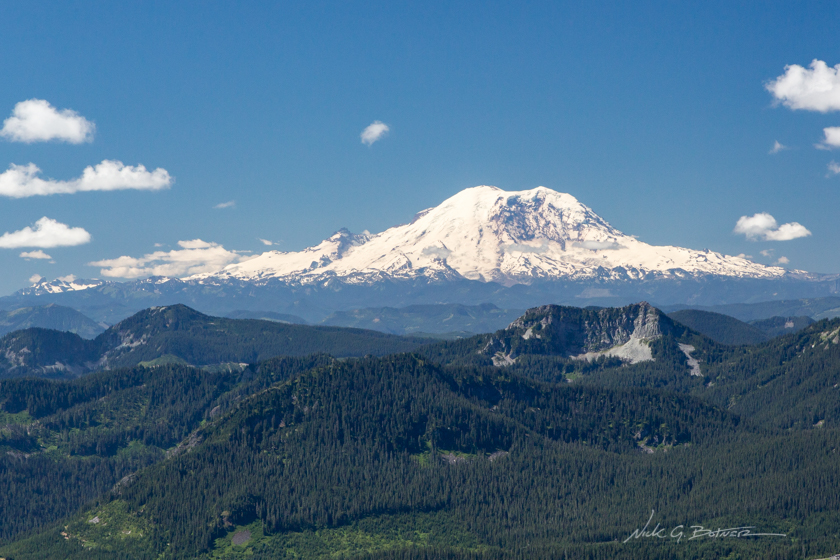 Once you hit the talus field and really break out of the trees you are greeted with a stunning view of Rainier. Looking south, towards Rainier, you have Tinkham peak in the foreground. Silver peak is just out of frame, to the right. 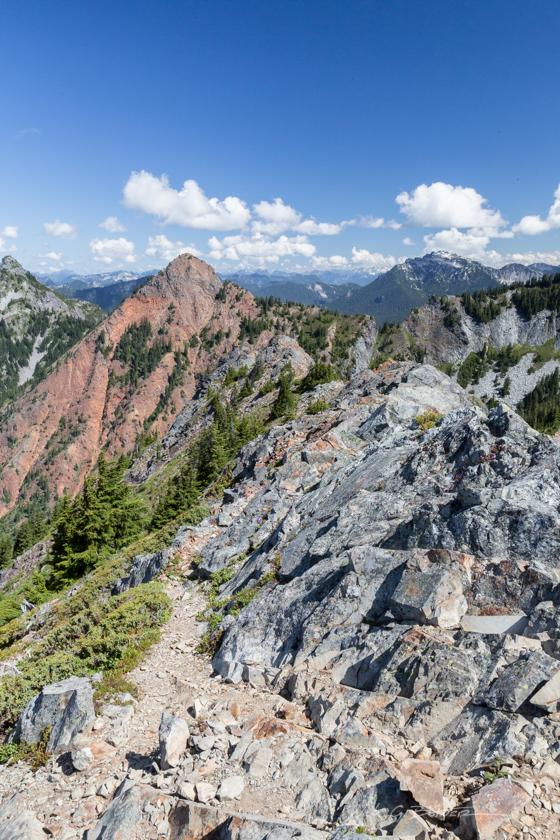 So the secret I mentioned in the beginning has nothing to do with the Katwalk. The real event is finding the scramble trail up to Kendall peak. Not only were the views fantastic, but this is the first time I have summited a peak and then enjoyed my entire lunch alone. It was a shock to me, seeing as how crowded the trail head was, but up here, there wasn’t another soul.

Looking north from the peak, you have Red Mountain with Big Snow Mountain in the background.

Here’s the view looking east. Thomson is the peak sticking up on the left. 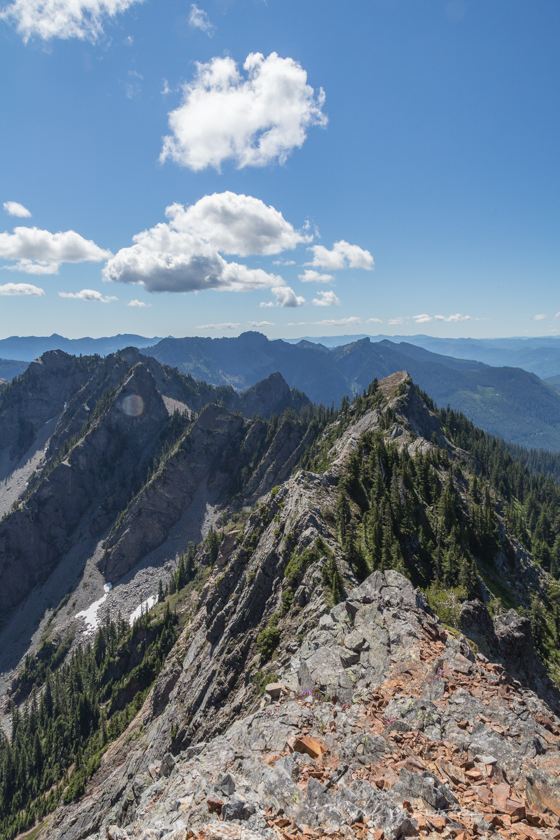 Here’s the view of the edge of the ridge looking south, Rainier is just out of frame to the right. 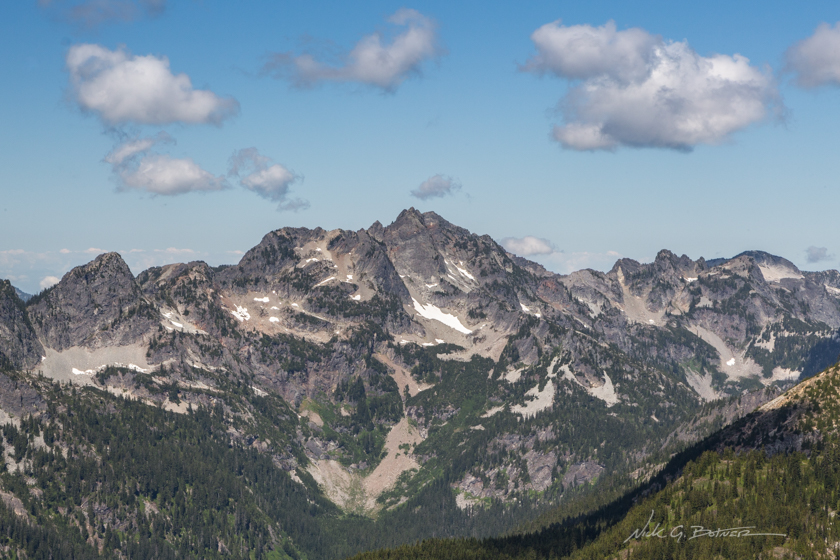 And looking west, you get a beautiful view of Chair peak. Melakwa Lake on the other side. 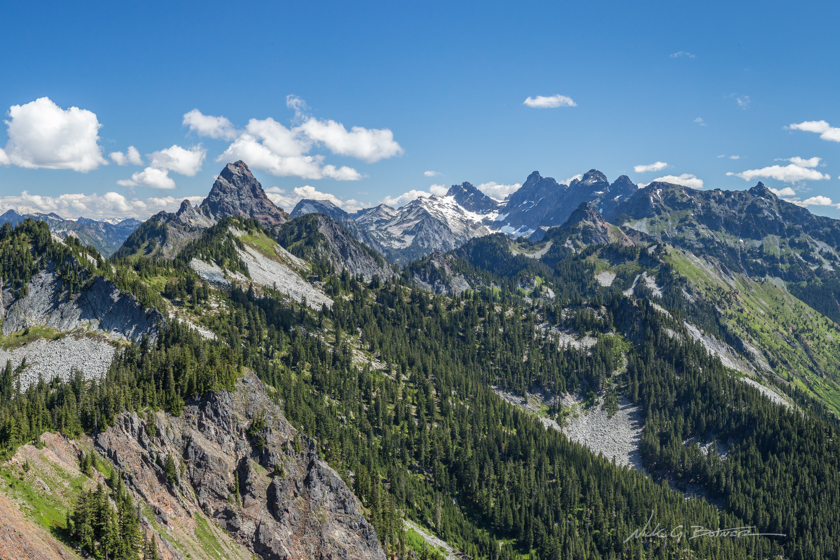 I couldn’t get over this amazing view of various Cascade peaks. Included in this shot, from left to right, is Thomson, Overcoat, Chimney, Lemah and Chikamin. 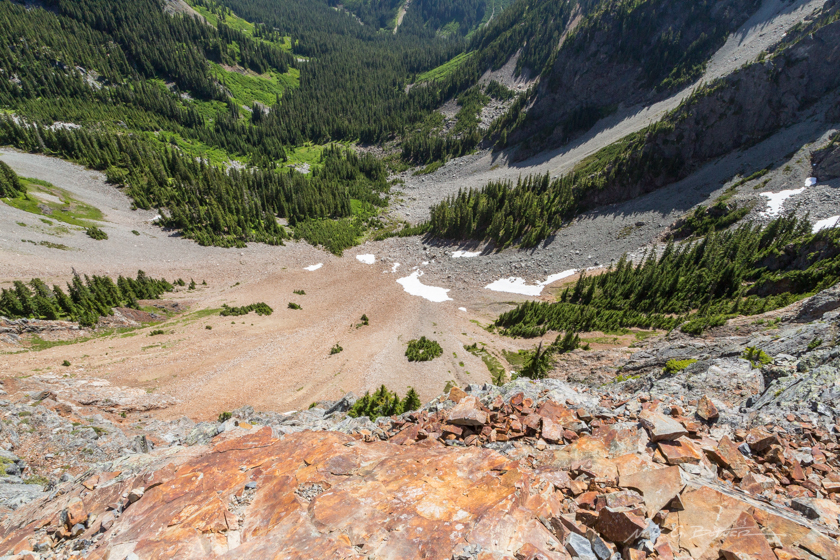 Looking east, towards the peaks, there is a steep dropoff. 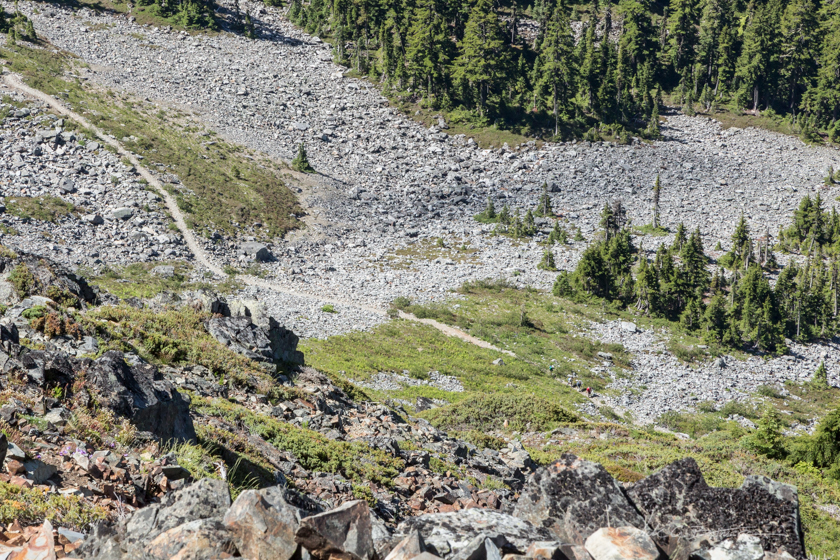 And looking west, you can see the Pacific Crest Trail. This is the trail we were on, and that’s how far up you have to scramble to get to the summit. I’ve included hikers for reference. 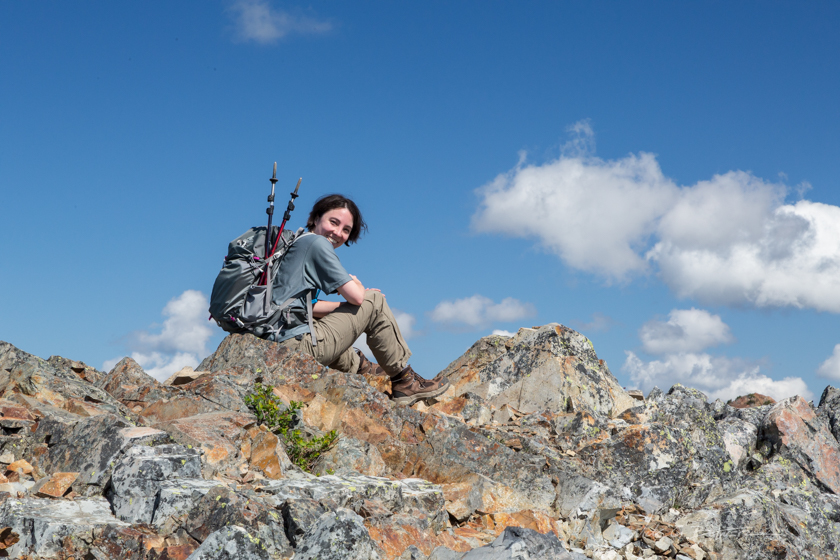 Jen happily signs the summit log while I try to get my fill of photos.

Here’s a pano I took with my iPhone. This shot encompasses south to west to north. You can see Rainier to the left, then I90 highway in the pass, some of the smaller Snoqualmie mountains with the higher peak being Chair peak, then the larger peak closer to the camera is Snoqualmie Mountain, followed closely by Red Mountain, then in the distance is the massive Big Snow Mountain, and ending on the prominent peak of Thomson. Oh, and Jen signing the summit log.

After Jen was done with the log, I kindly asked her to step behind me so I could take another pano. This shot encompasses west to north to east. If you are wondering where the Katwalk is, it is hidden in this shot. But you can approximate it’s location by finding Thomson peak and then bring your eyes down till you go through some trees and then hit the boulder mound almost halfway down. The Katwalk is behind the top of that boulder mound. 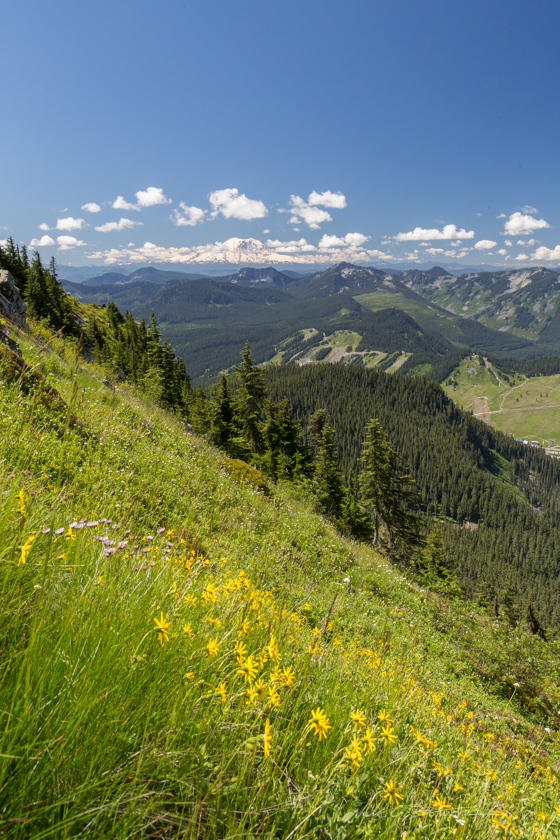 After tacking the summit scramble, it was time to see what the Katwalk was all about. So we started our reverse scramble and made our way back to the PCT. 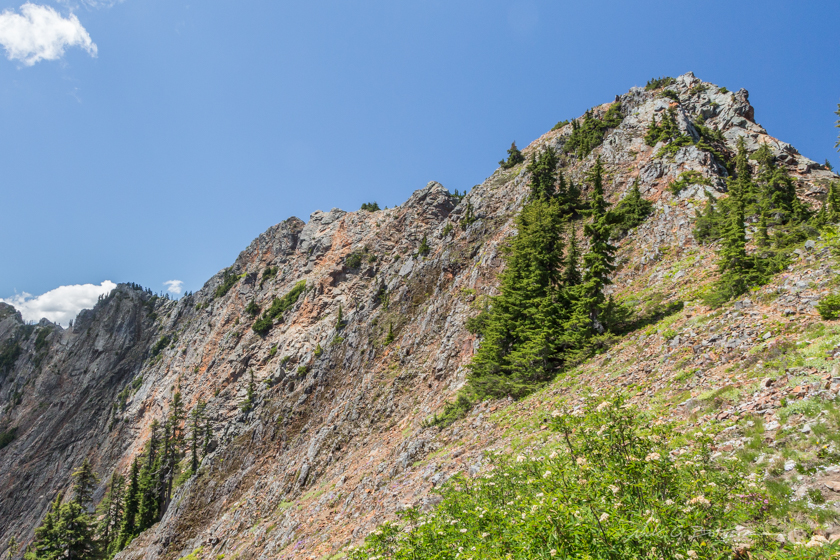 Here’s a view looking back at the Kendall summit. The peak is center left in this shot. 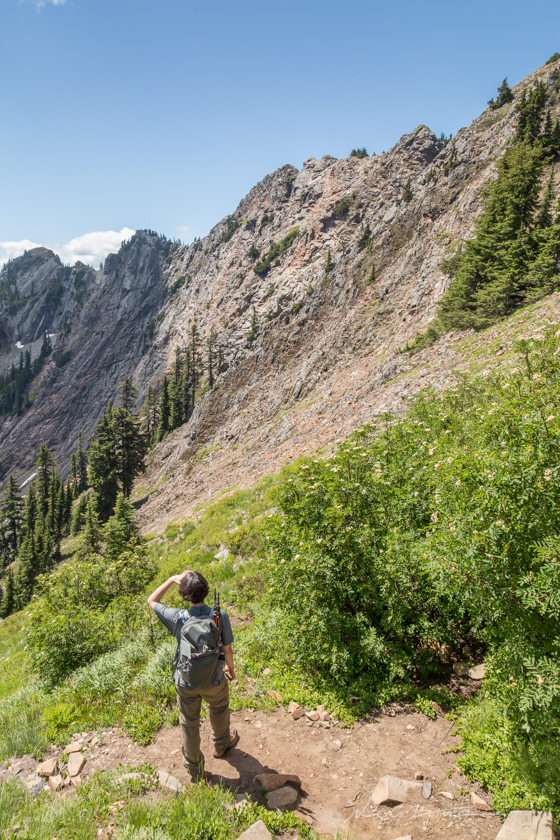 Jen inspects where we were. She is impressed. Impressed she did not end up tumbling down the scramble. 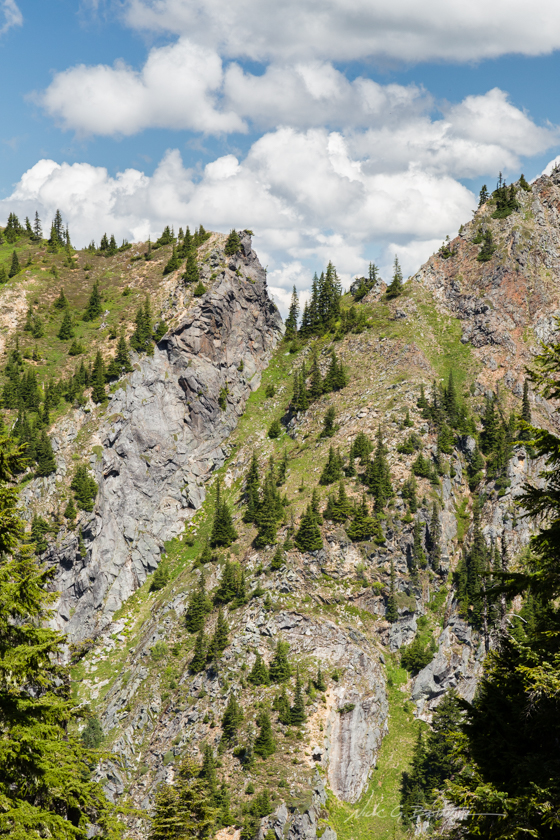 Looking at the ridge where Red Mountain lies, there is a portion that appears to have cracked, split and shifted a hundred feet. 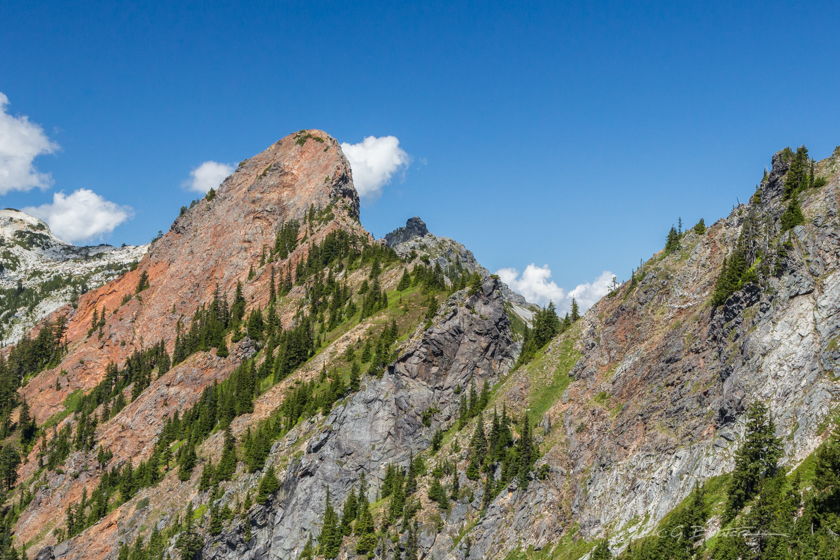 Almost to the Katwalk, you get a side view of the side of Red Mountain.

My favorite shot of Red. I just love the colors and the angled gradation of various terrains. 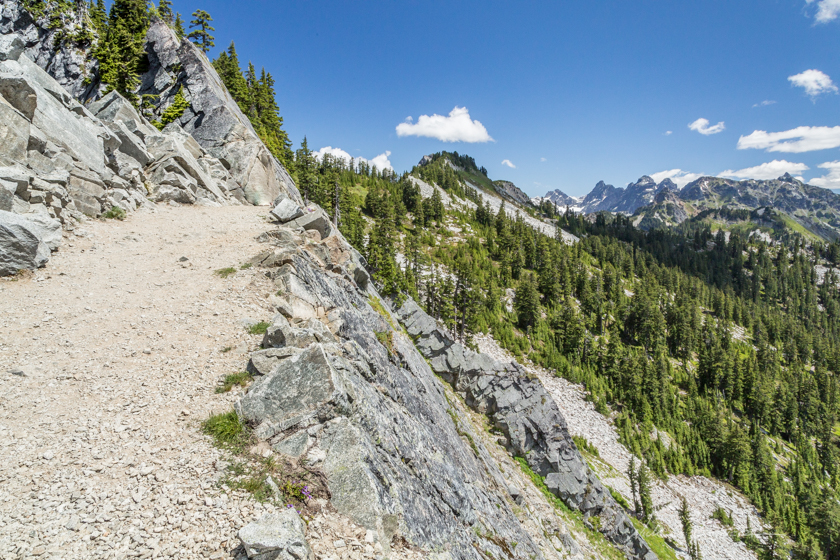 And a short way from the summit you will arrive to the Kendall Katwalk. 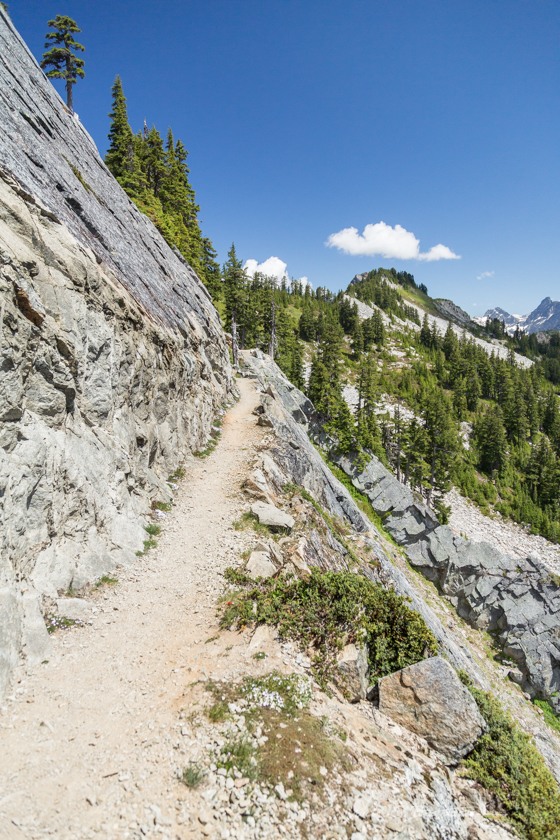 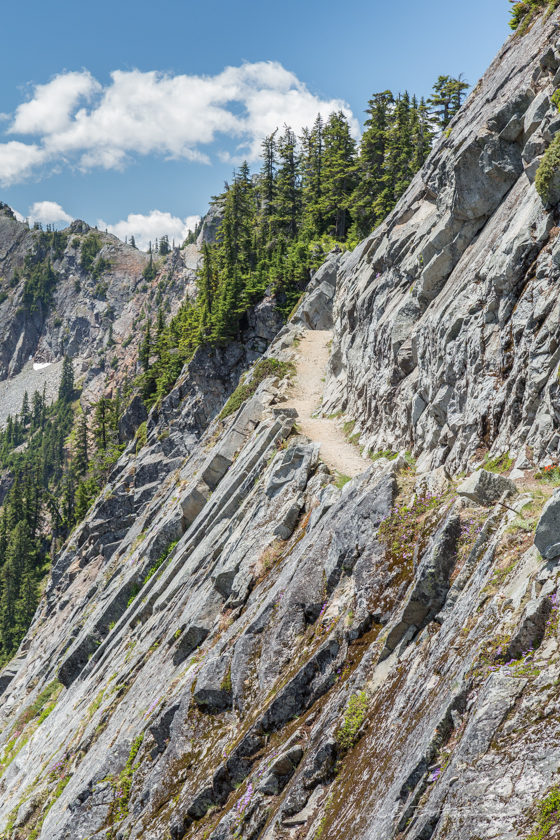 And this is what it looks like after you have walked past it. To be honest, if I had come out here just for the Katwalk, I would have been a little nonplused. I mean, don’t get me wrong, I admire the work it took to blast out that rock. But when I think of catwalks in stadiums and theaters, I think of narrow nerve wracking paths. This is more like a comfortable wide path on the side of a mountain. 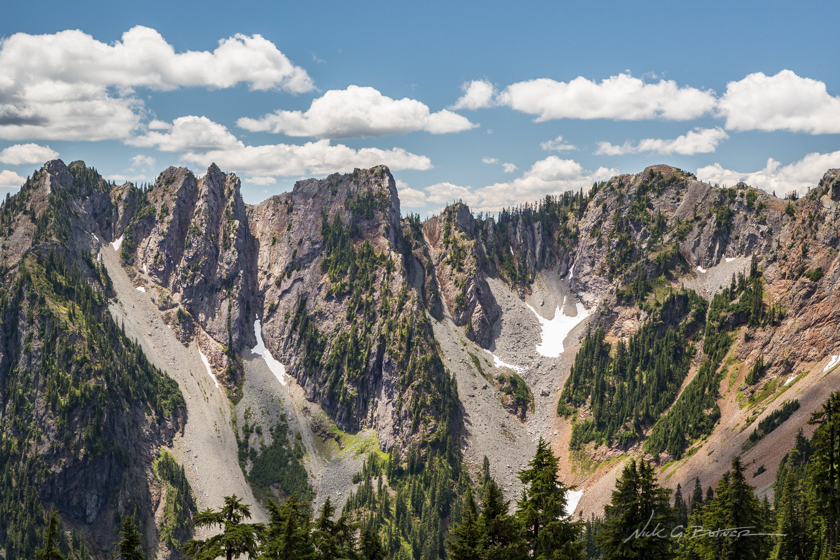 We continued on past the Katwalk, which doesn’t take long for some of the lovely views to be had. 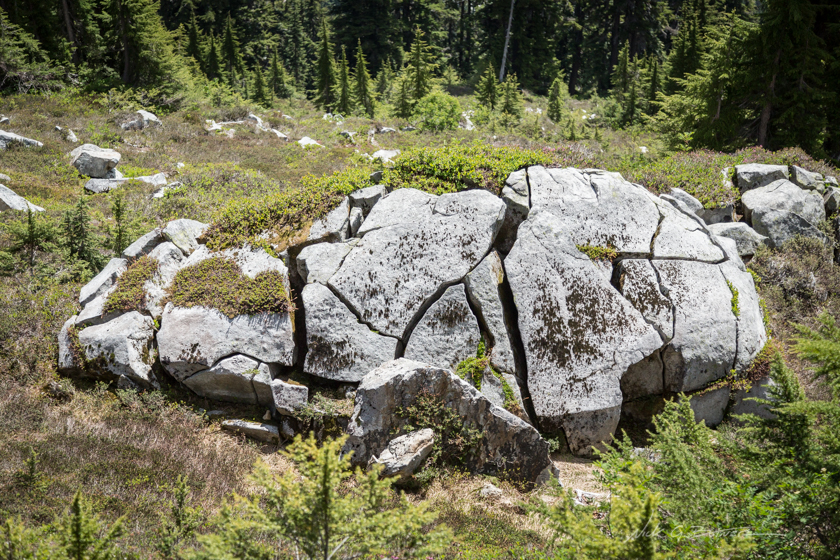 This boulder looked like a petrified godzilla egg that shattered on impact.

After about a mile or so past the Katwalk, we had racked up roughly seven miles. Things were starting to get good, but we knew we had seven miles back to the car. So we decided to resist the urge to continue and turned back for the car. 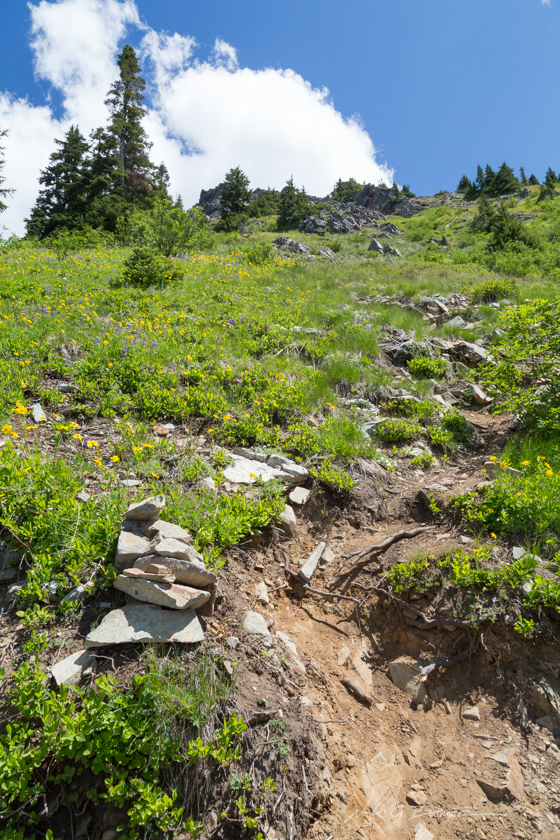 Along the way back, I remembered to get a photo of the scramble trail up to the summit. It’s really hard to tell how steep this is for the photo. But it’s a lot more impressive in person. 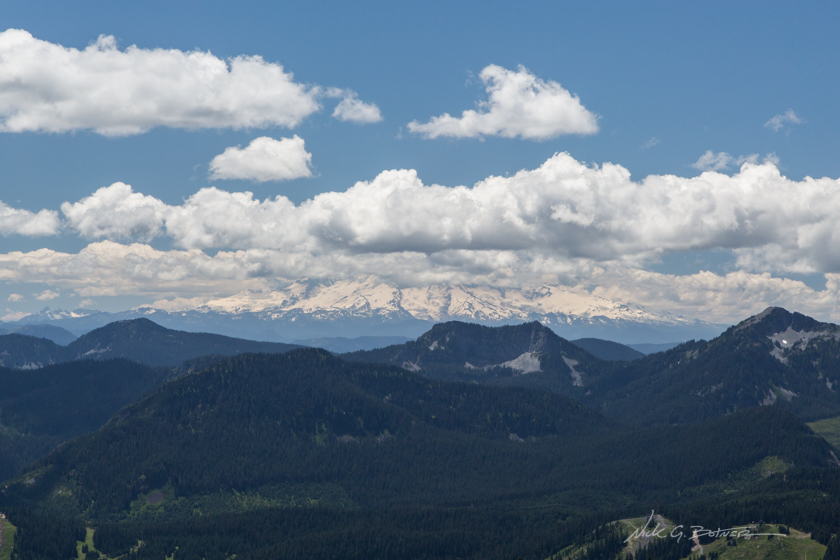 Along the trail home, the clouds started to roll in. Which was a bit sad, because it clouded the beautiful view of Rainier. Also, you can now see Silver Peak on the right edge of this shot. 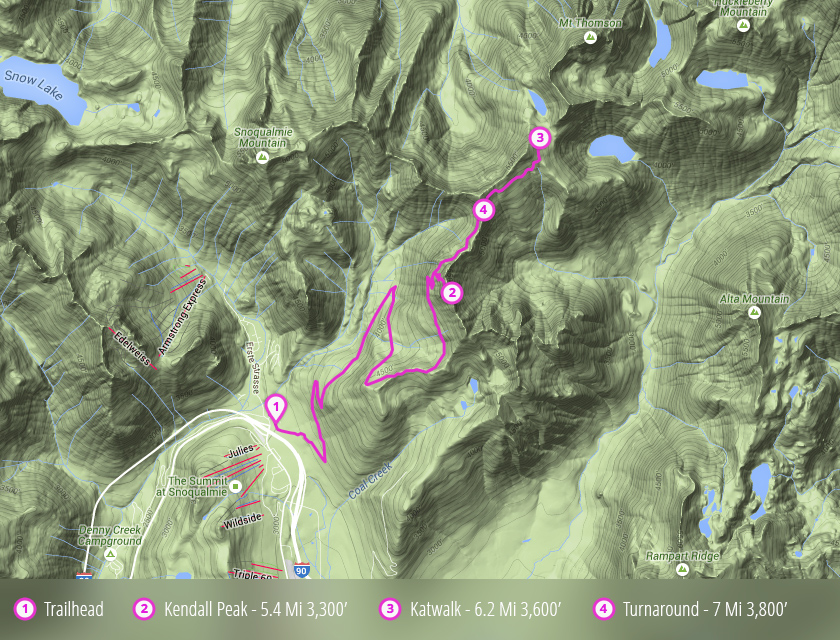 So here we have it! Roughly 14 miles and if you count the ups and downs (like my GPS does) then we could say this trip was somewhere around 4,700 feet in elevation gain. That might sound like a lot, but when you spread it out over such a long distance, it’s really not that bad.

In fact, I recommend this hike to a lot of people. I tell them about the scramble, but I also recommend it to beginners as well. Once you get up to the Katwalk, its more or less on an even keel for a few miles. The views up there are beautiful, and it would also be an easy overnight with all the space once you get past the Katwalk.

So hopefully my photos have convinced you to summit Kendal. And if you are on the fence, you should get off it right now and start planning your trip. This was honestly one of the most rewarding local trips I have taken (aside from the time I went up Snoqualmie Mountain).  The only caveat is you need to get to the trailhead around 8:30am on a summers day. Or you might have an issue with parking.