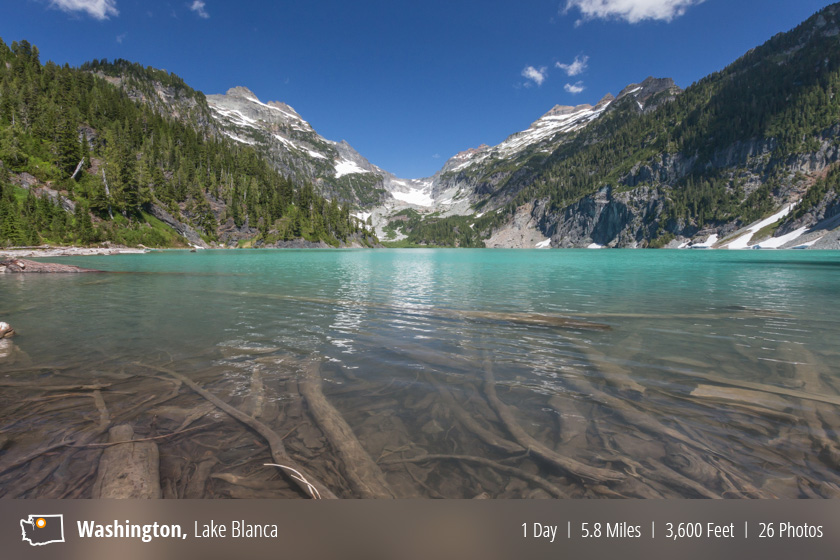 Nestled deep in the Wild Sky Wilderness, Lake Blanca rests as an emerald jewel hidden behind a staircase of switchbacks.

Reading the trail reports on WTA, I had to wait out the remaining snow before visiting Lake Blanca.

Getting to the lake, from Seattle, took a little over two hours. It actually took me a little longer because I was worried I would run out of fuel on the forest roads so I turned around at one point to fill up before going all the way into the wilderness. 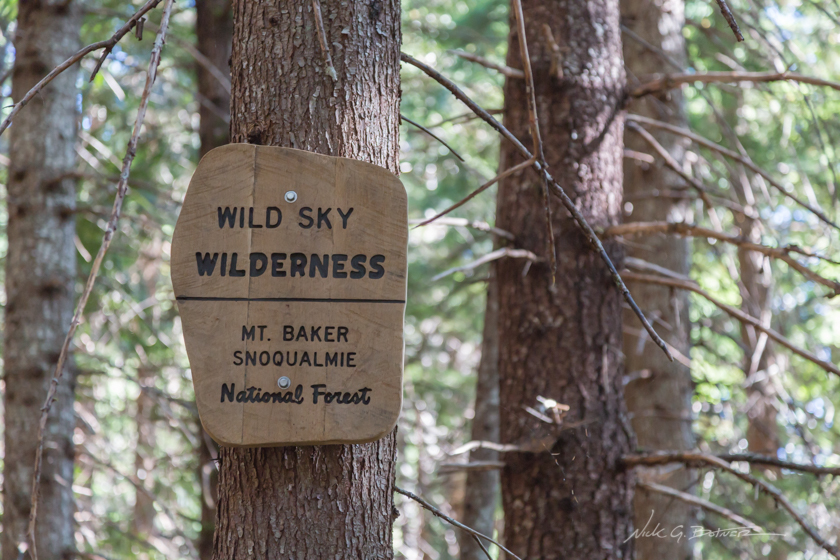 When I arrived at the trailhead, there were already a plethora of cars in the parking area. Only a couple of them seemed to be fresh, the others were all there for overnight trips.

The hike to Lake Blanca is an interesting one. Make no mistake about this trail, it’s here to put you through your courses. Right off the bat, you have about a minute of hiking before you hit the staircase of switchbacks. During my hike, I decided to count the switchbacks and see how far I could make it before needing a rest. I continued to count them all the way up, and I ended up with 22 switchbacks before the trail eased up and became a bit more windy. 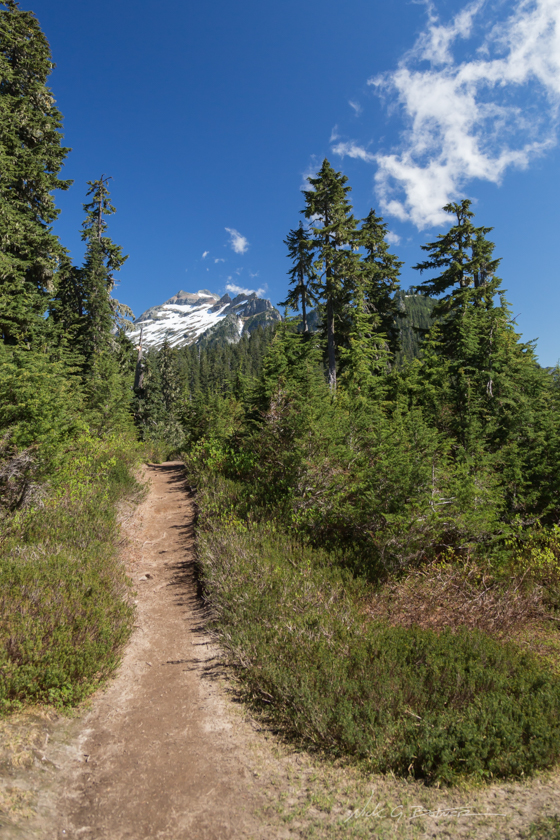 Taking photos of switchbacks is no real fun. So the camera didn’t even come off the clip till an hour later and I was up on the crest of the mountain. 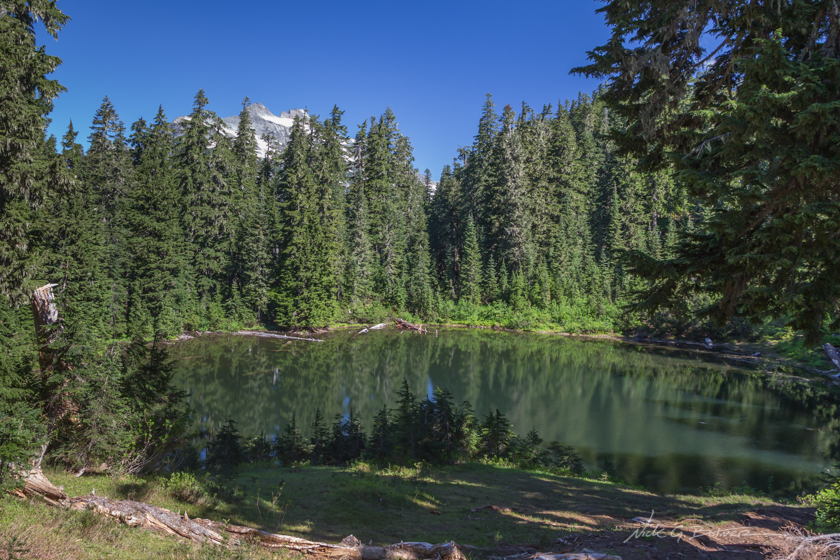 During your hike to Lake Blanca you will pass by the Virgin Lake. A shallow lake with little to no movement, it seemed to be more of a pond than anything else.

It’s also from here that you will start your descent to Lake Blanca. So if you need a moment to catch your breath, there are a few meadows and mountain views to take in before heading down. 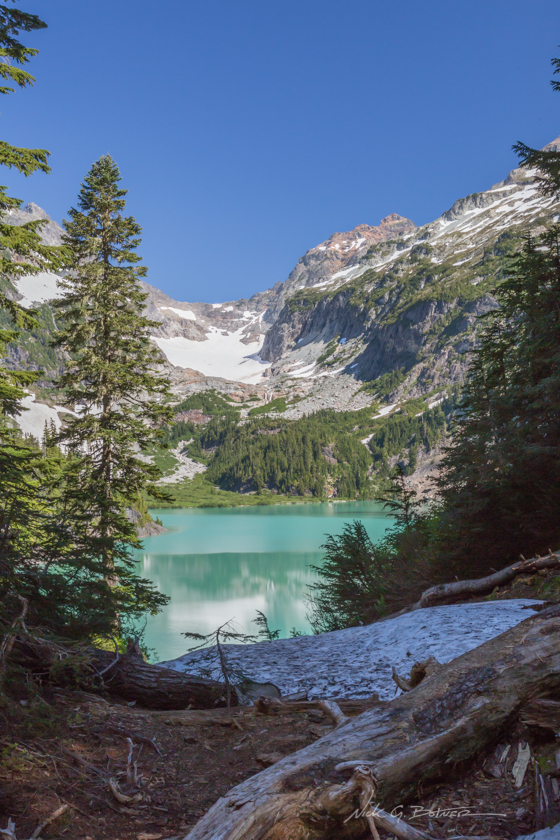 First sneak peak of the lake. 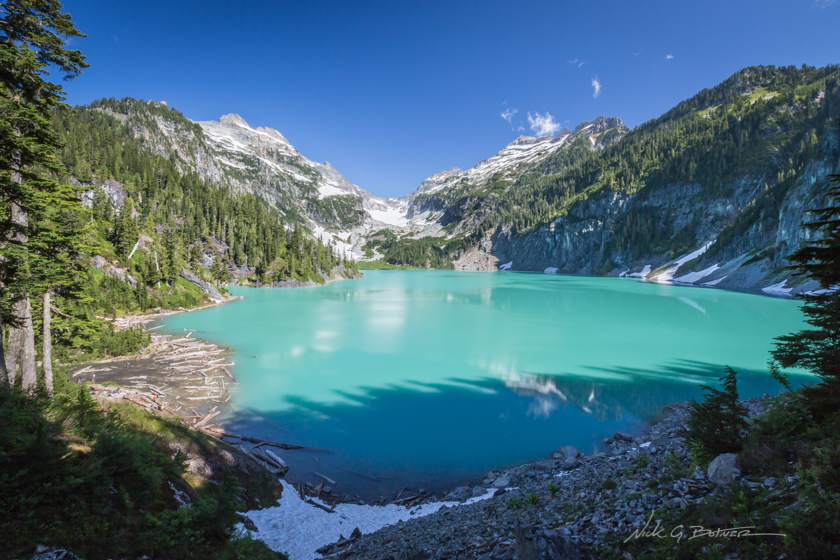 I was so excited to finally be at the lake that I took the first side trail and scrambled along the southern ridge of the lake.

As you can see in the photo above, the way the land forms, early morning light is blocked via a cliff on the southern edge of the lake. Looks like I will be able to take my time and wait for the light to improve. 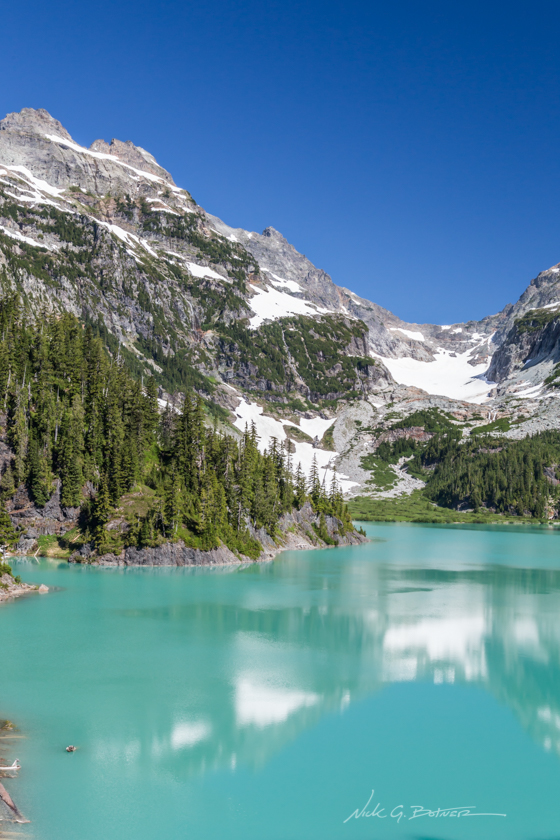 It’s really amazing to see a lake with such colors. 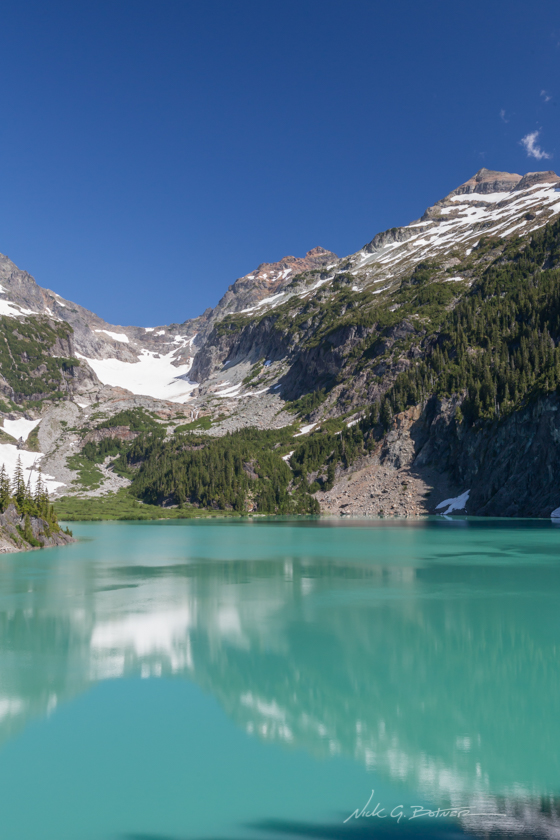 It’s too small to tell, but there are a few waterfalls on the other side of the lake. 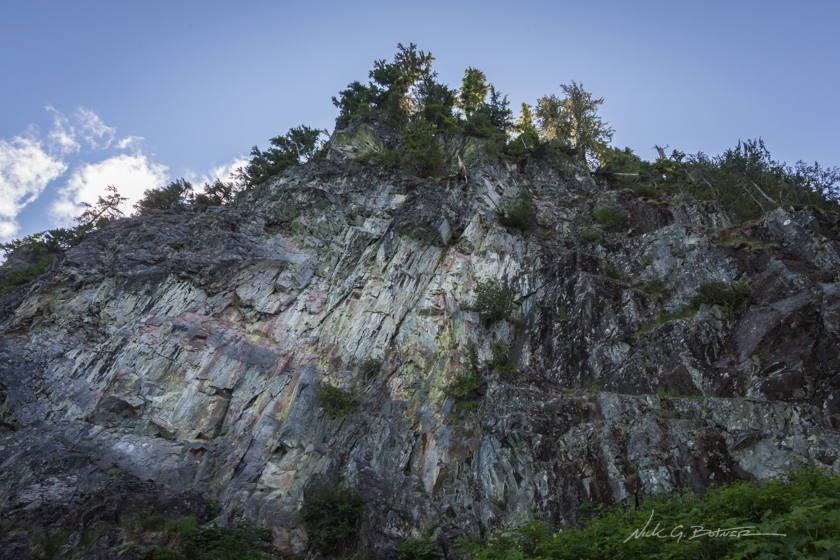 Looking behind me, a sheer cliff does its best to block out the morning light. 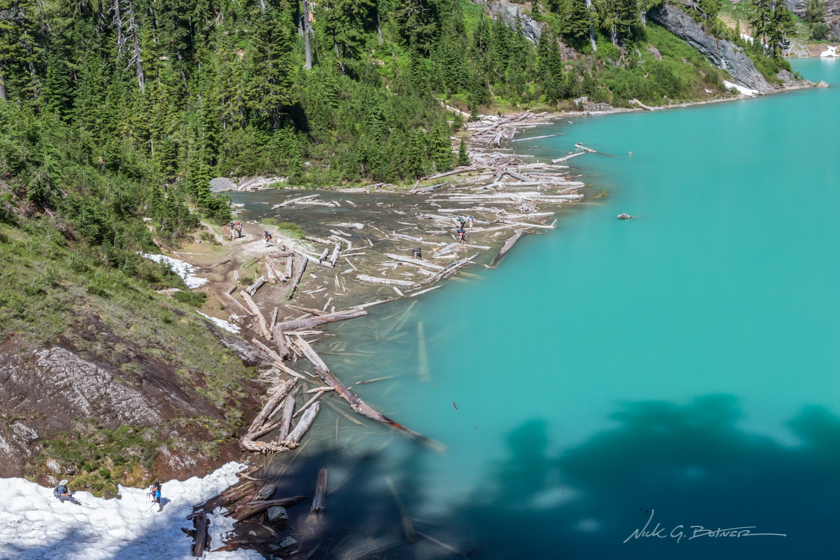 Sitting up on the ridge, I watched as backpacker after backpacker forded the river on their return trip. And if you look closely, there is a little photoshoot going on down in the snow. 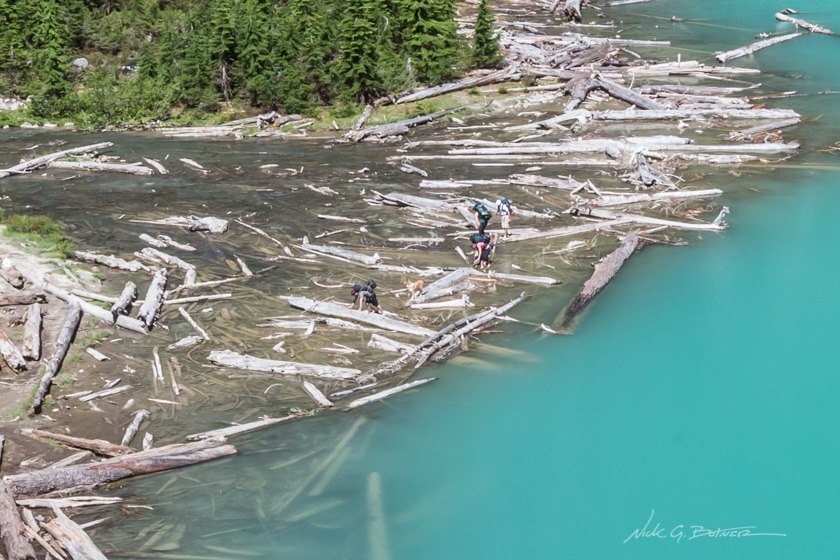 Here’s a closeup of some backpackers who decided to try and not get their feet wet by taking the long way over the log jam.

After watching quite a few people ford the river, it was faster and safer to just walk through the narrow part. Taking the outer log part only resulted in the backpacker having to get wet in the end no matter what. Plus I watched quite a few dogs fall off logs and have to be dragged back up via their collars. 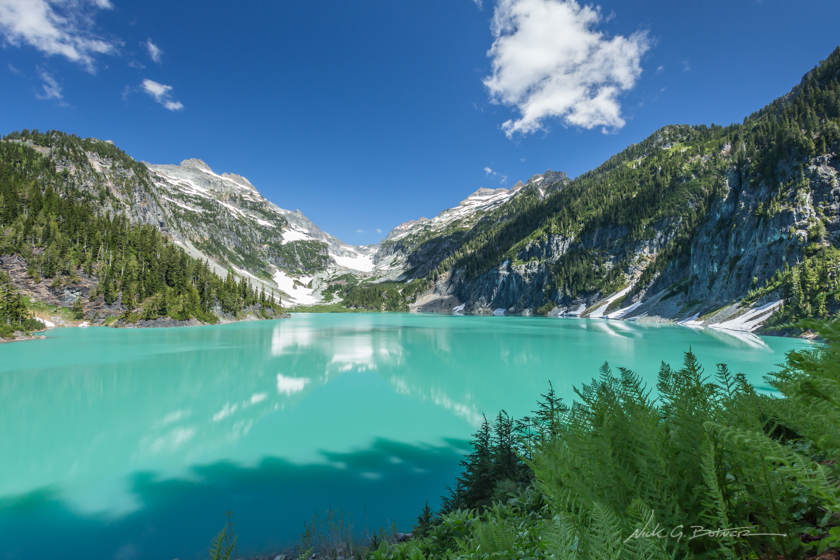 Still waiting for the sun to come up.

By this point, my fingers started to get numb. Of course I have been sitting in the shade for almost an hour. But it’s summertime. I wouldn’t have thought that it could still be so cold here. 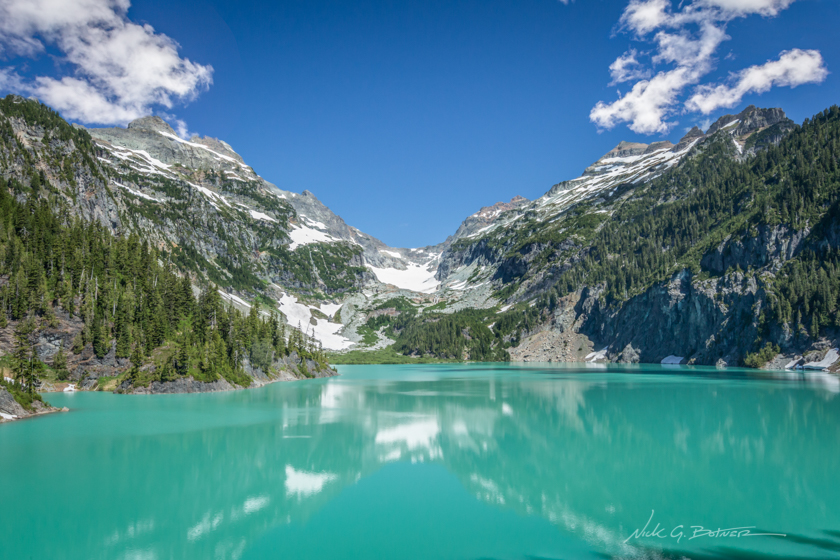 With boredom setting in, I couldn’t wait any longer and decided that this was enough to get down to the lake and start taking some shots. 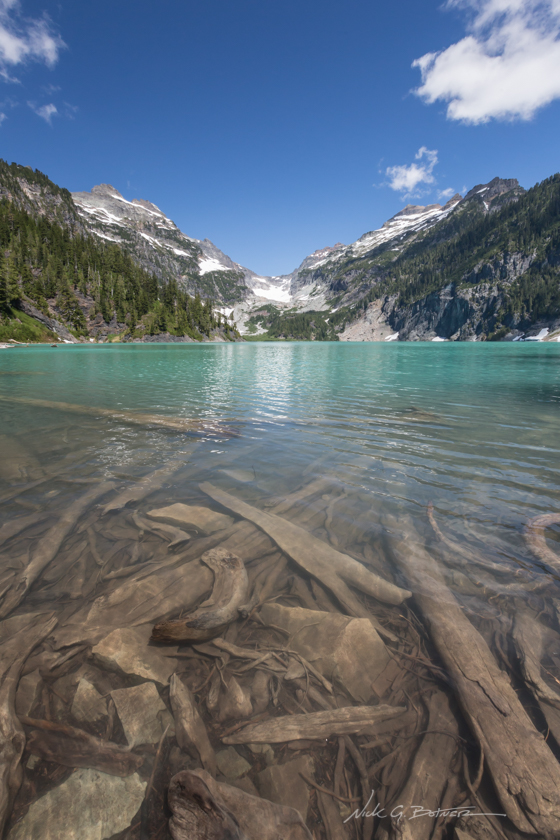 Probably my favorite shot of the whole day. It doesn’t focus on the color of the water, but does a great job showing the sunken logs at the lakes edge. 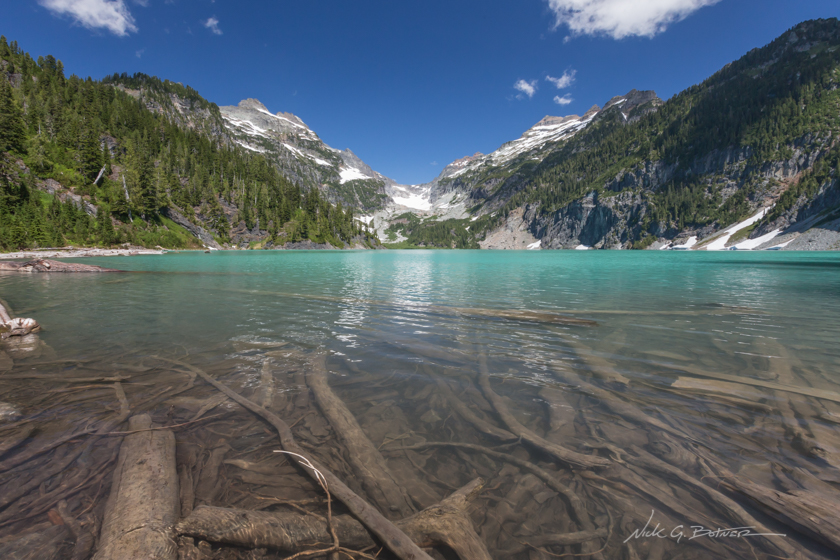 Not as captivating of an image when shot in landscape. But still beautiful none the less. 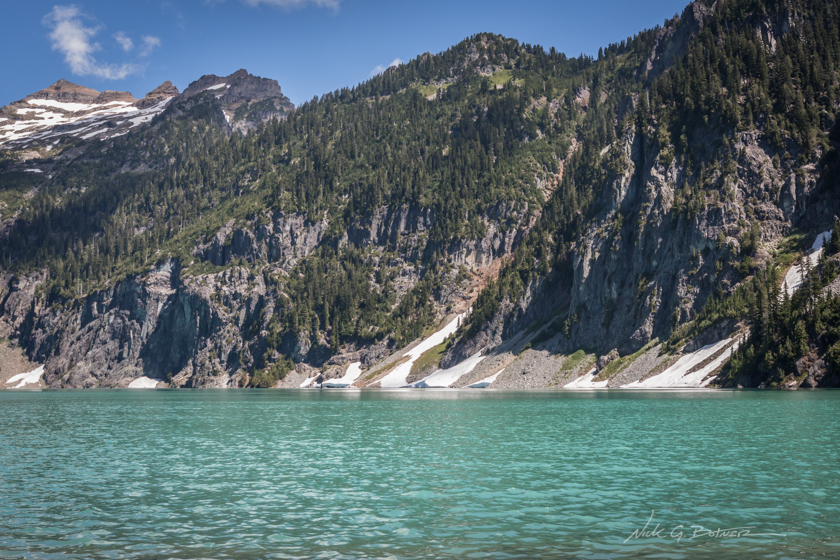 A view of the shores edge along the eastern side of the lake. 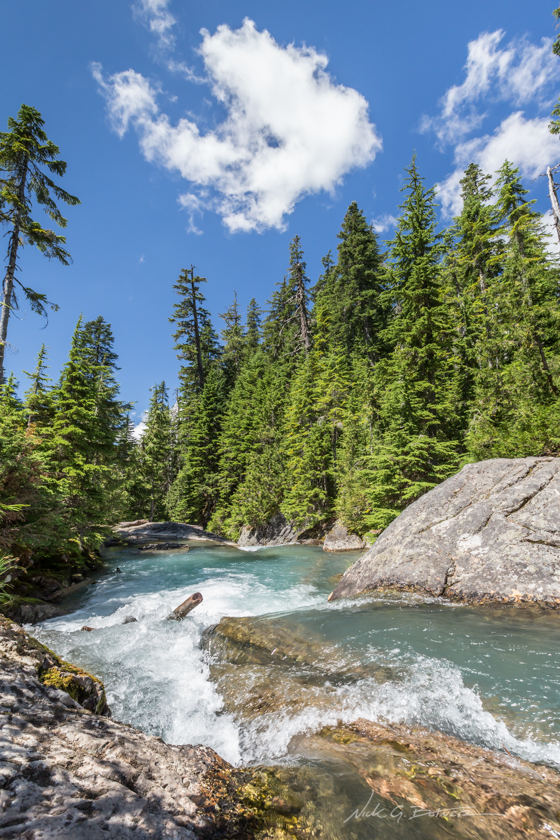 Having filled up on lake photos, I headed over to the log jam and went to see where the river started. 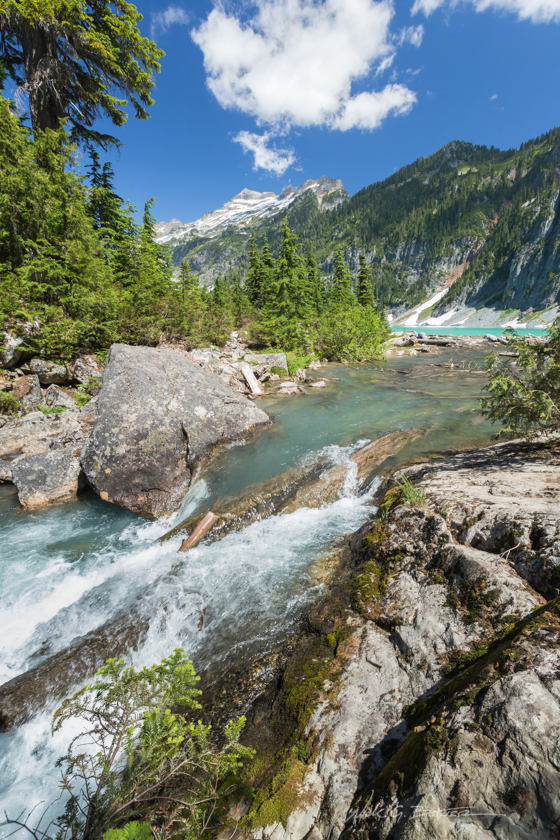 Looking back at the lake, the river gets its first set of rapids. 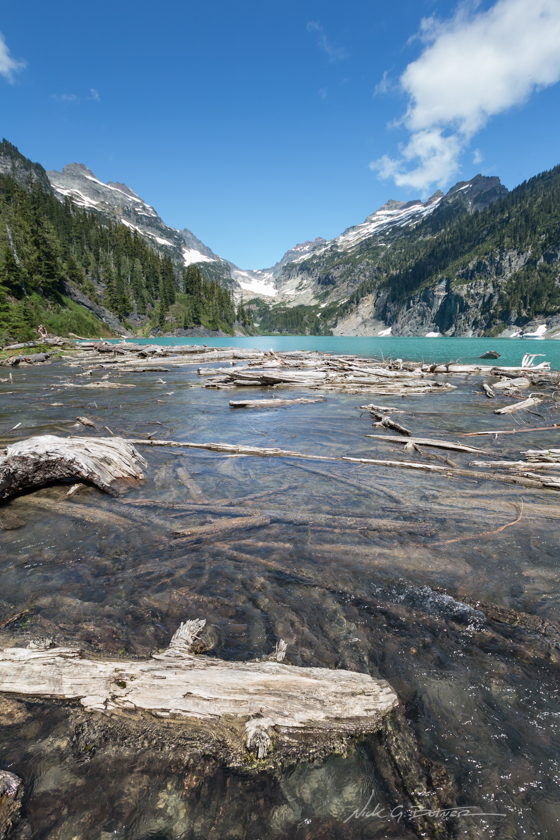 Not quite done with the lake, I wanted to see if I couldn’t make something of the log jam. 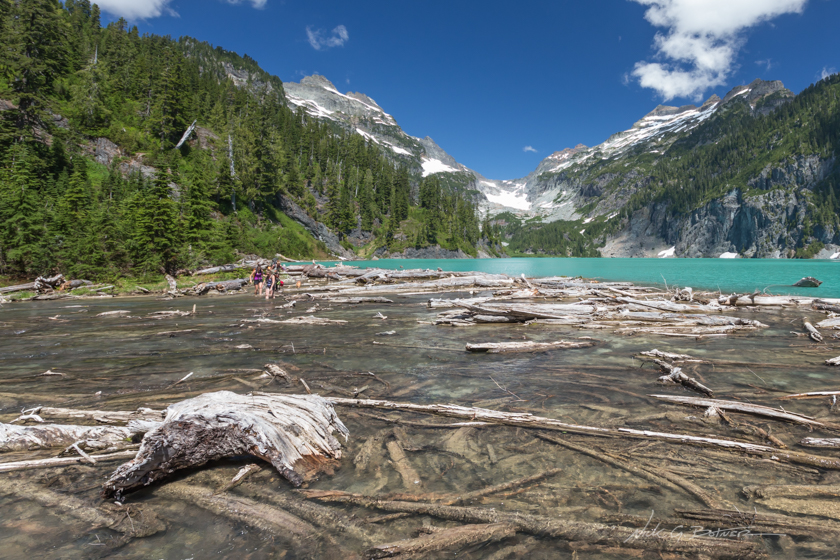 A group of backpackers and their dogs set course to ford the river. 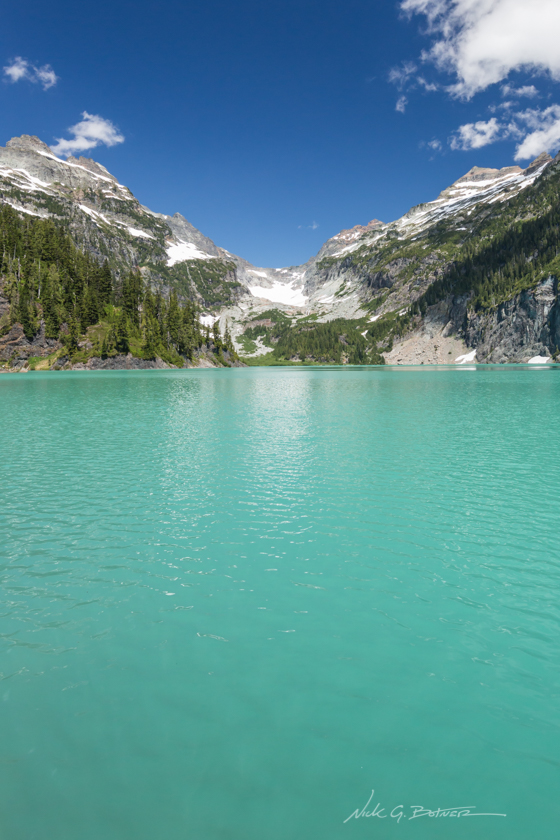 So maybe I wasn’t done with lake photos. Not wanting to go back just yet, I hopped out onto the log jam and tried to get some shots where you couldn’t see the shores edge. 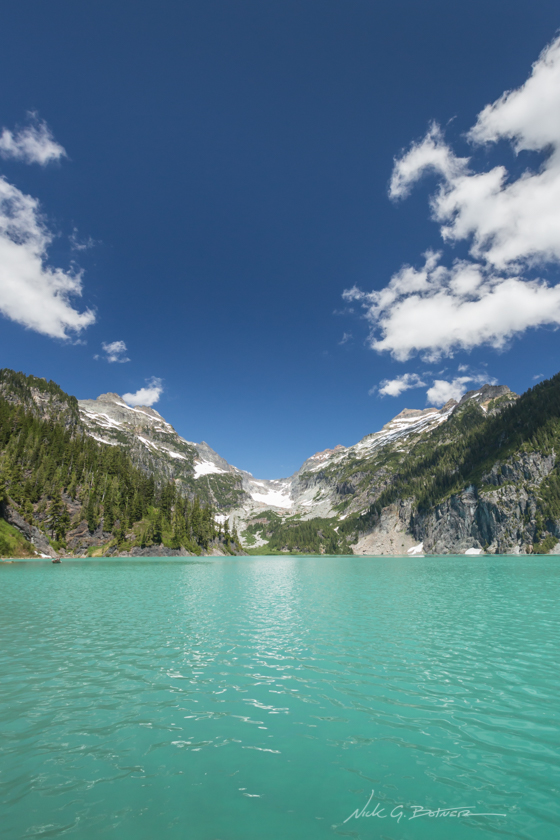 Sadly, the afternoon meant that the wind would pick up and blow out any chance of reflection on the waters surface. But it also introduced some much needed cloud structures to the shot. 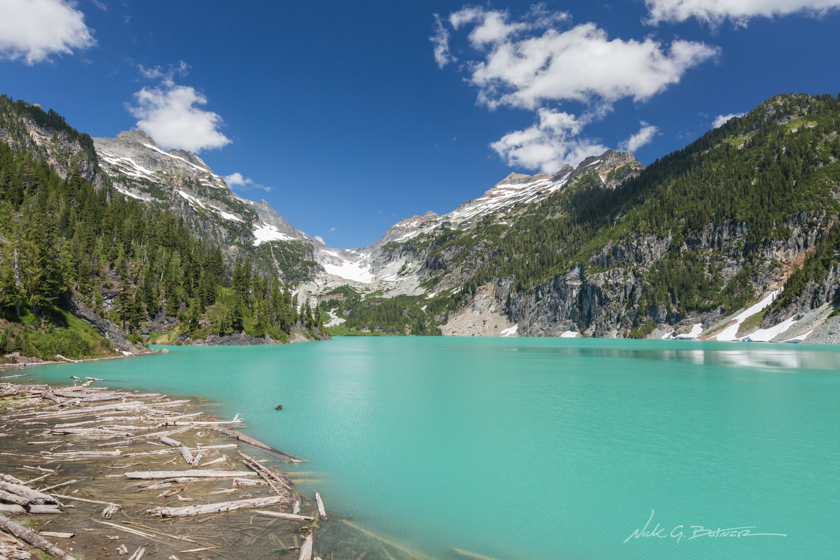 Feeling accomplished, it was time to head back. Here’s one last look at the lake before turning into the forest. 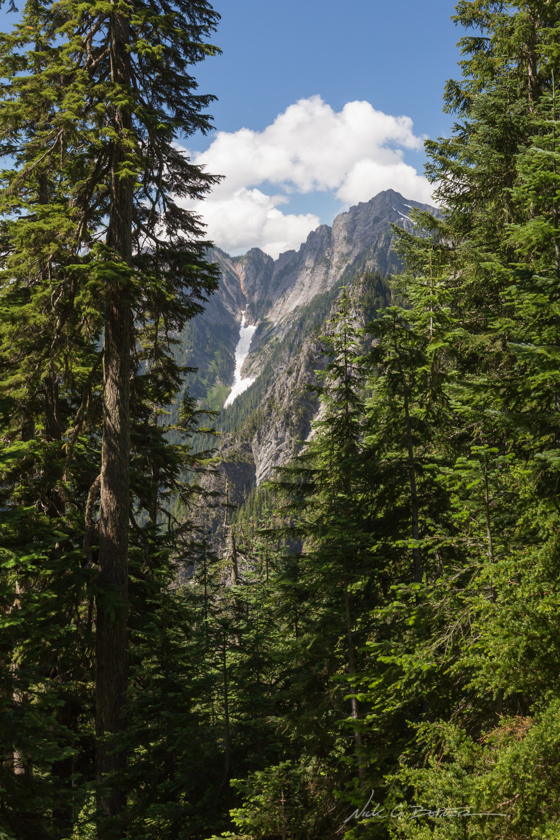 It’s interesting, the things I missed, when I was hiking towards the lake. 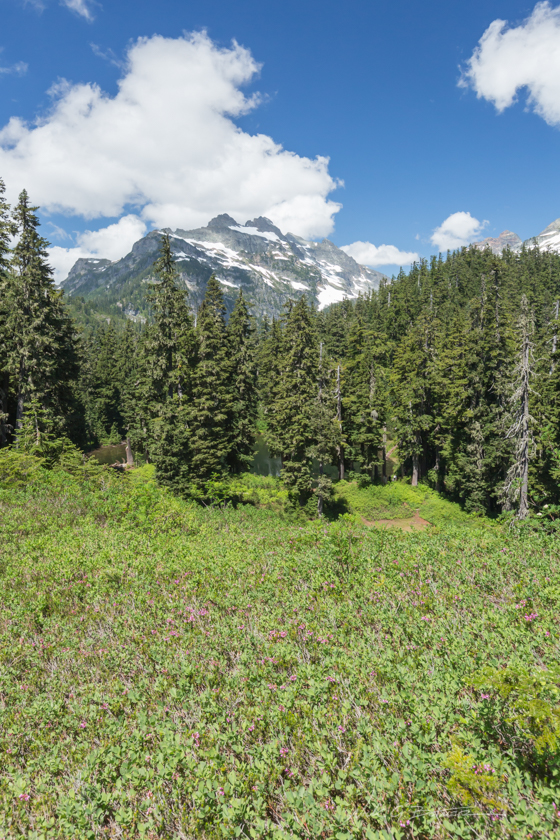 I was so focused on time and my destination that I missed a lot of these views on the way up. 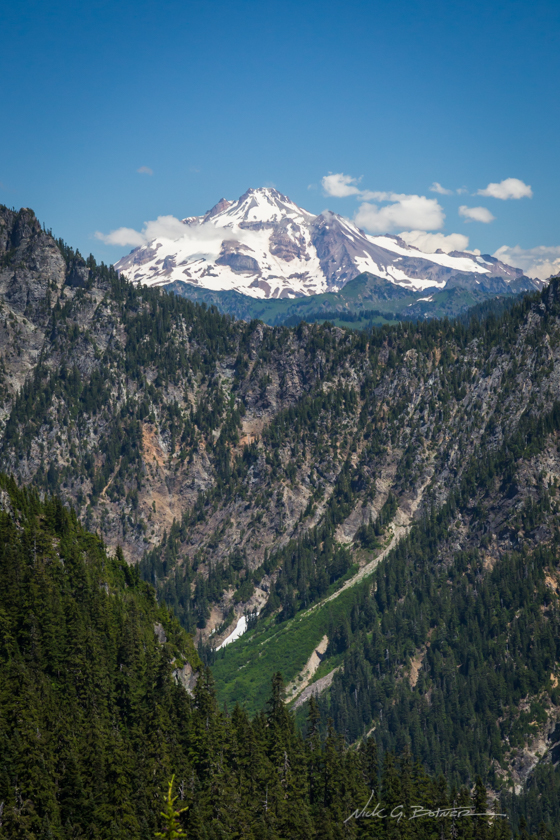 In fact, there are multiple places you get a clear shot of Glacier Peak. 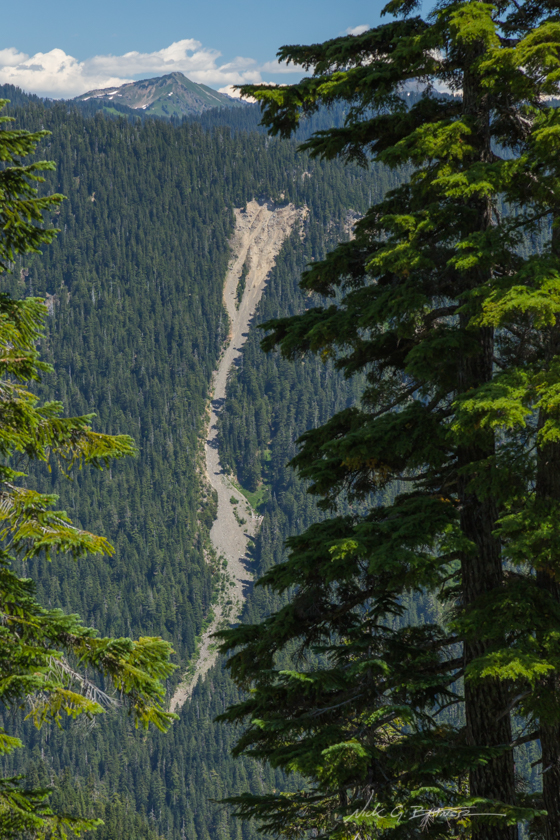 Or this view of a landslide on the adjacent mountain ridge.

All in all, it was an unexpected and welcomed treat to see a few more things before heading back down the staircase. Which was a lot of fun in and of itself.

So if you are looking for a quick, strenuous hike with a big payoff, then Lake Blanca is for you. See how far you can make it up the staircase before needing to catch your breath. Or bring your trekking poles and take your time working your way up. Either way it’s a winning situation. 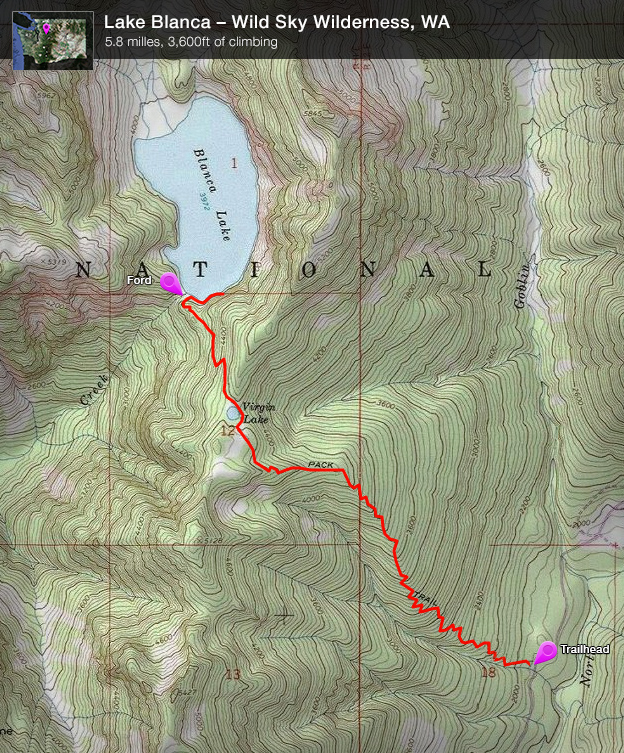 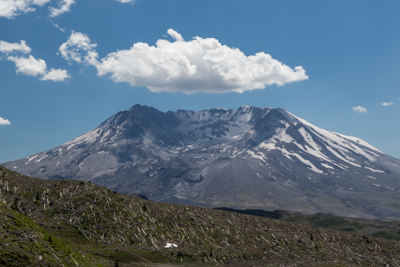