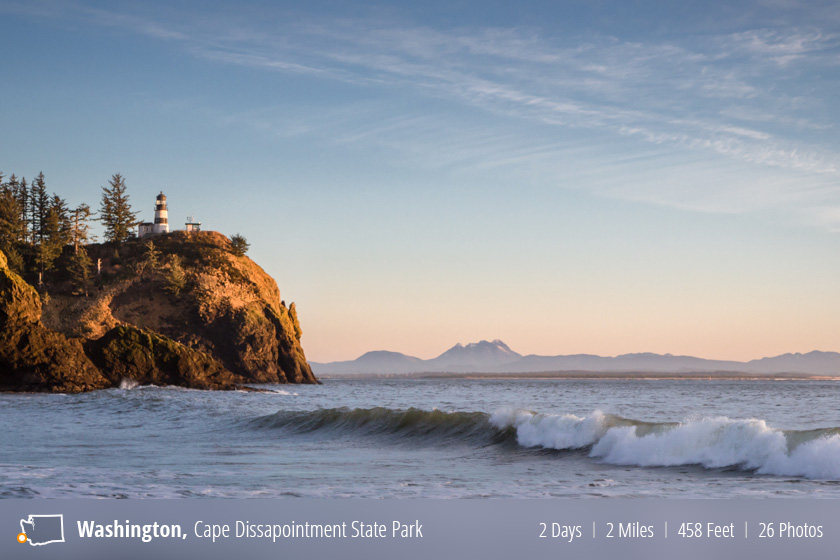 Back from a Christmas break in Florida, I decided I would do something different this New Years and go camping in a couple State Parks. First up on my list was Cape Disappointment State Park in Southern Washington.

When researching popular Washington State Parks, Cape Disappointment registers high on the list. And seeing as how it’s a little over three hours drive for me (Seattle) I would need to make a camping trip out of it. Well, in order to get the best lighting conditions that is. So I packed up all the gear and headed south.

Time was short for me, and the weather was amazing. Especially with it being winter, blue skies are a rarity. So first thing I did was rush to the ranger station to register my vehicle and pick out a camping spot.

With all the formalities out of the way it was time to tackle the park as efficiently as possible. Less than three hours of light I needed to hit all the hot spots and still have time to set up camp. 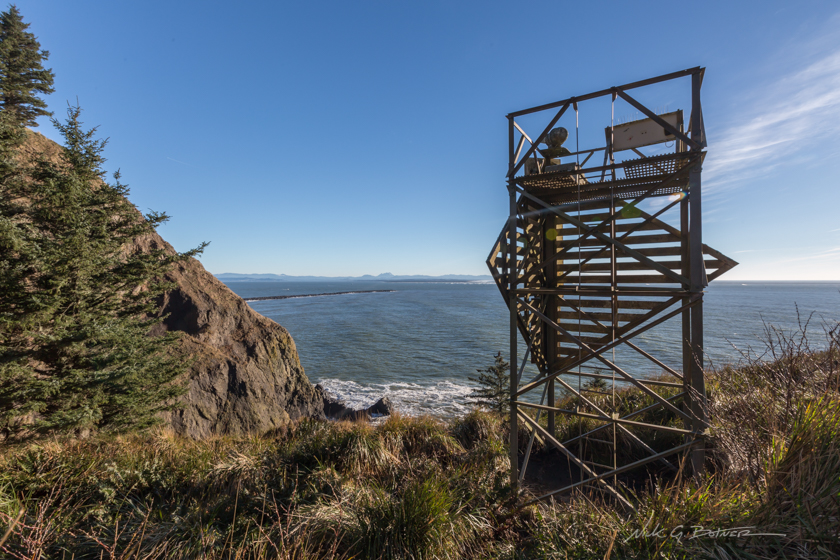 First up was heading to the Cape Lighthouse. Parking was ample and the trail was roughly a quarter mile to the lighthouse.

There are a couple things to see a long the way, inner bay and a small cove, but the real attraction is the view from the lighthouse. 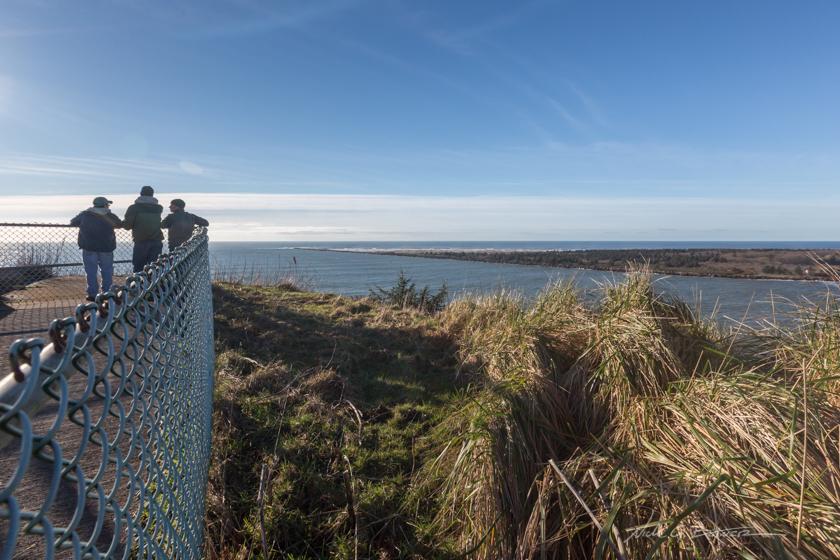 The viewpoint is chained off, but from here I could see that the waves were pounding the coast. The wind was moderate and I still had some time before things would go dark.

So I took a few more photos and high-tailed it back down the trail. It was definitely time to make my way to the next view point. 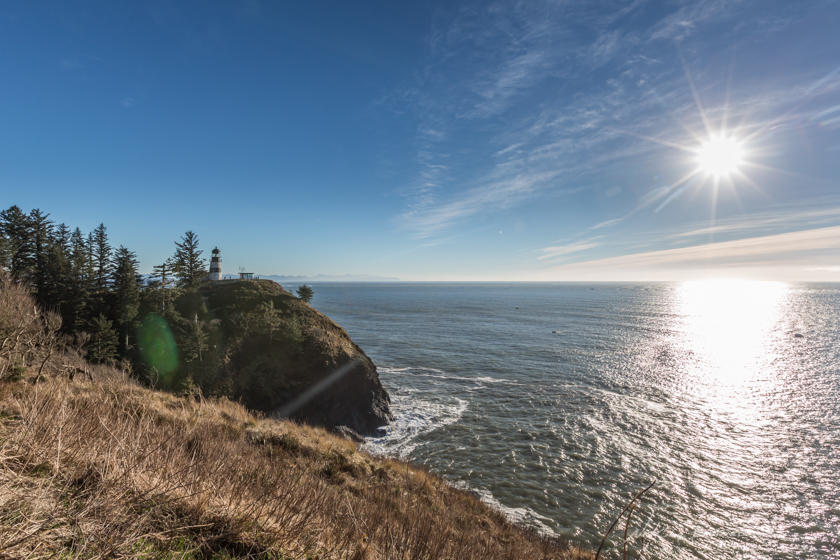 Looking South from the Lewis and Clark Interpretive Center you can see the Cape Disappointment Lighthouse. The small structure to the right of the lighthouse is as far out as you are allowed to walk. 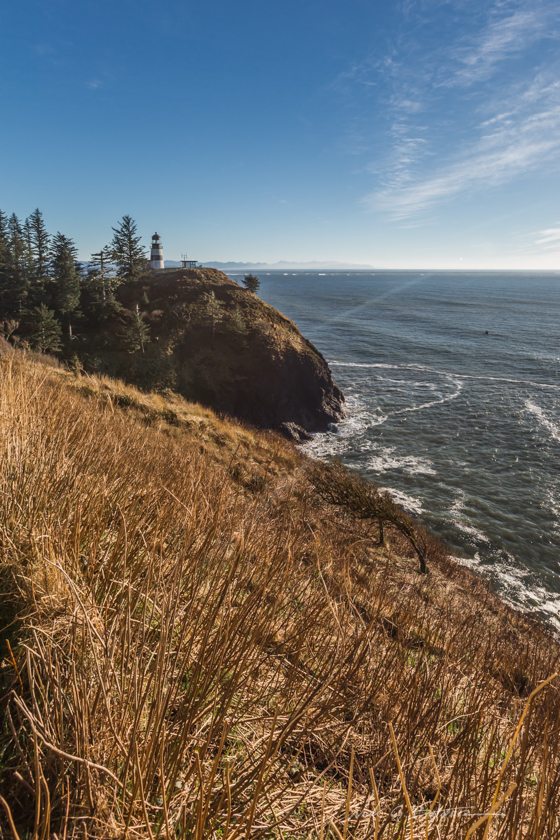 Another view looking south. I wonder what this looks like in the spring. Will the grass be green? 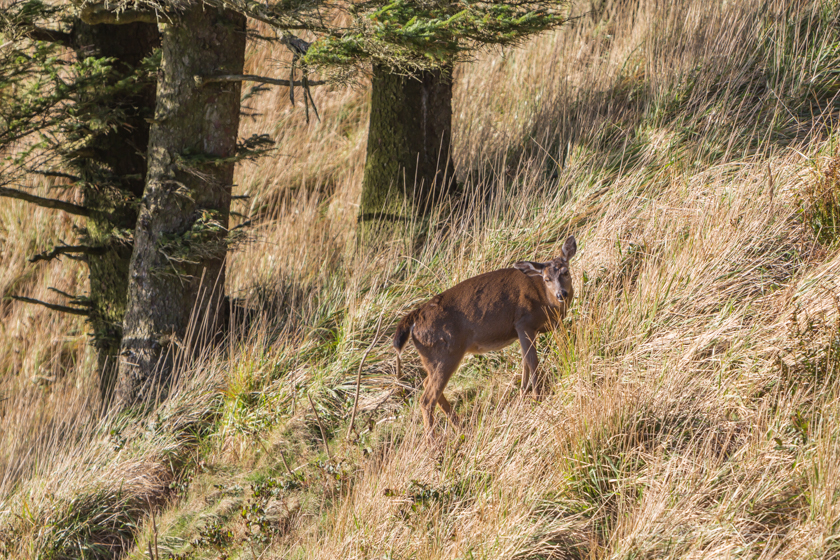 Just North of the center I was able to spot a single female deer feeding on the grass. 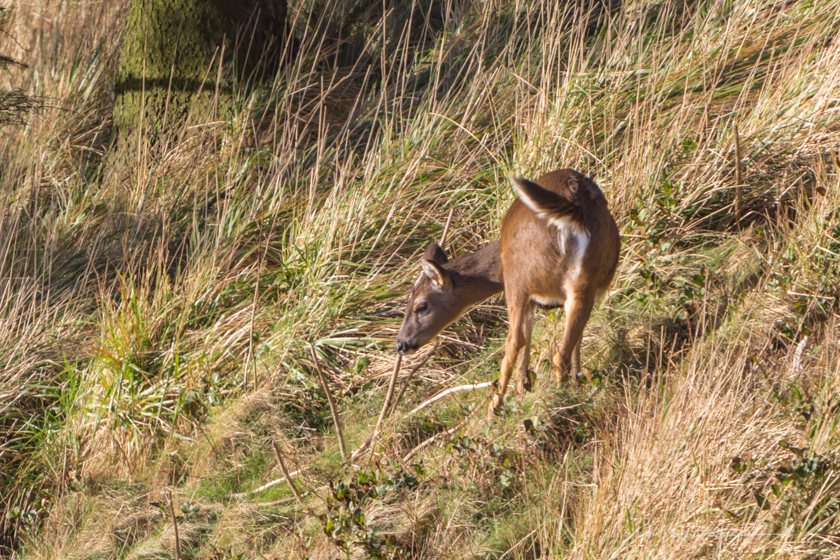 I pointed her out to a few other visitors and when they left I tried calling out to see if I could get a head turn in my direction. With no such luck, and a ton of deer butt, it was time to move on.

Instead of heading back to the car I saw the trail leading North. So I took that and then did a little off trail hiking to see if I could get a better shot of the lighthouse. But before that happened, I tried to get a little closer to the deer. 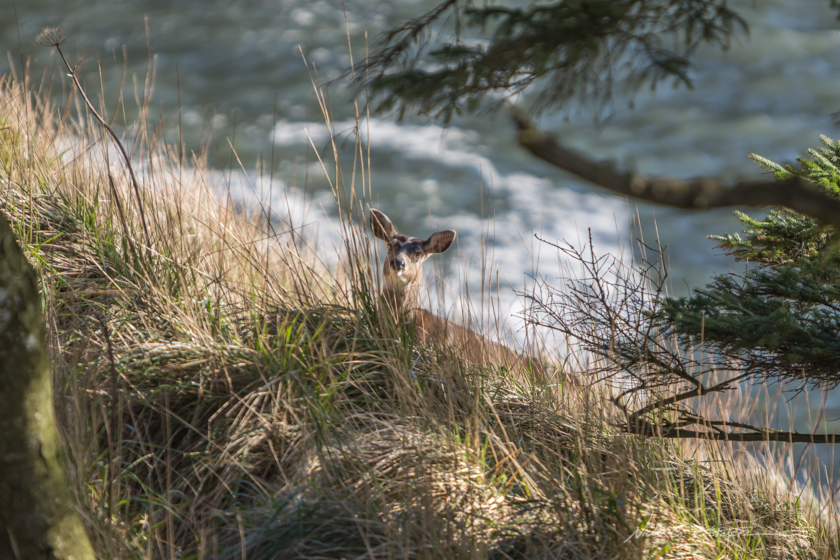 She was now paying attention to me. Only because I was trying to make my way through fields of thorn bushes and wasn’t the least bit quiet about it.

With this being as close as I wanted to get, I went back to scoping a better lighthouse shot. 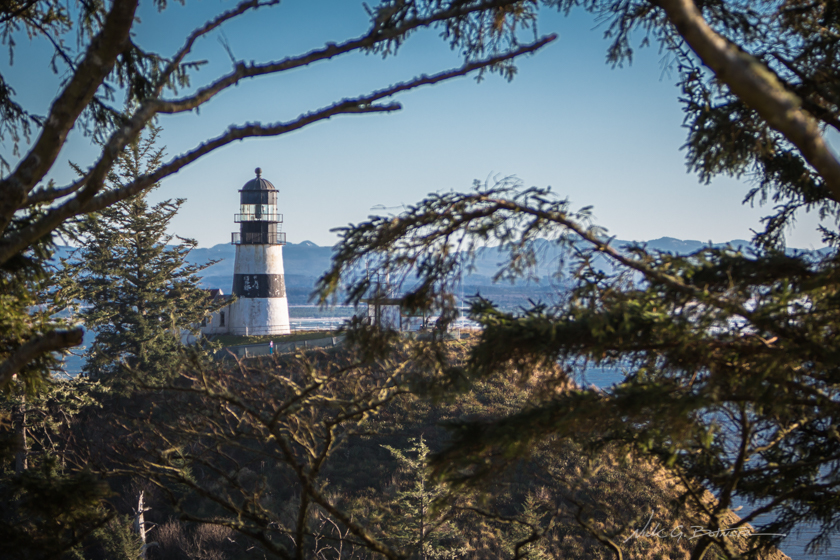 Success. Just enough break in the trees to enable me to get an interesting shot of the Cape Disappointment Lighthouse.

With the lighthouse wrapped up it was time to head down to the beach and see what the waves were like on the North Jetty.

Parking close to the beach was blocked off. And with time closing in on me, I had to run what seemed like a half mile to get to the beach. Of course a half mile isn’t much. But with a camera and a backpack full of camera gear (maybe 15lbs or so) it makes running a little less easy. 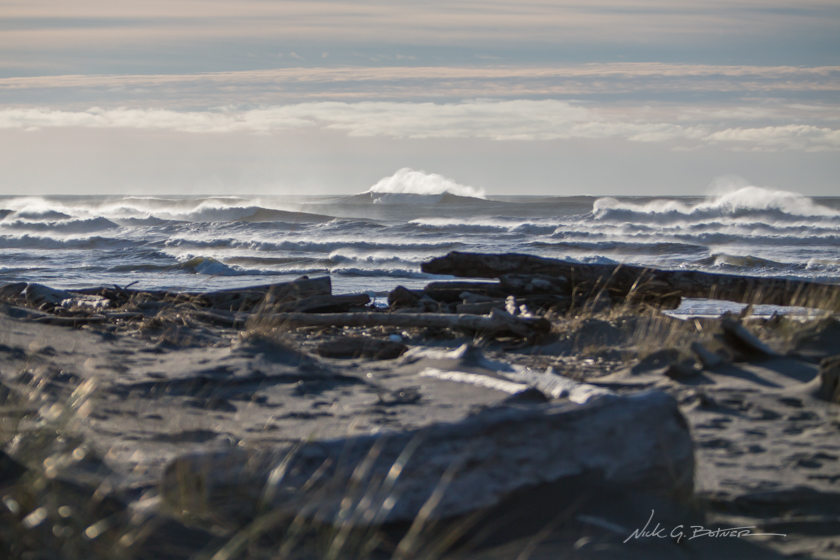 Just before the beach you need to cross through the dunes. Once you make it through that you are greeted with a view of the North Pacific. 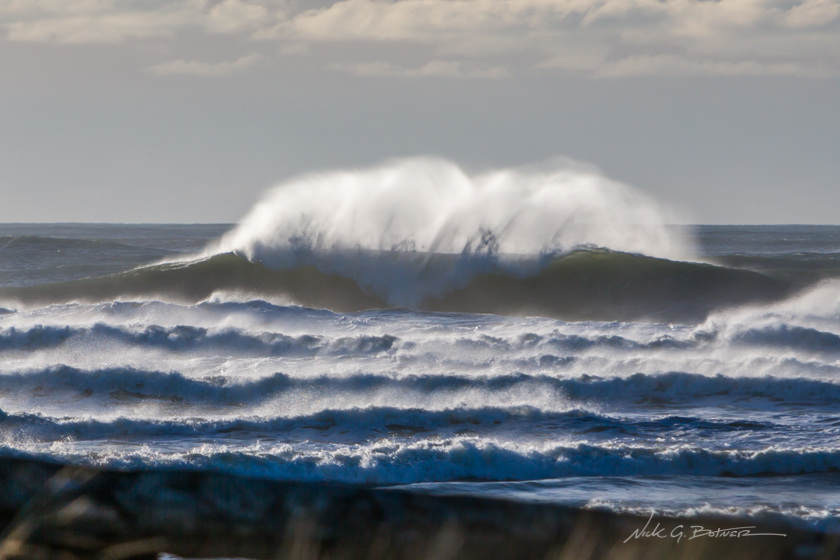 Surf was definitely up. And with the wind ripping into the face of the massive waves, it made for some spectacular spray as the waves crested. 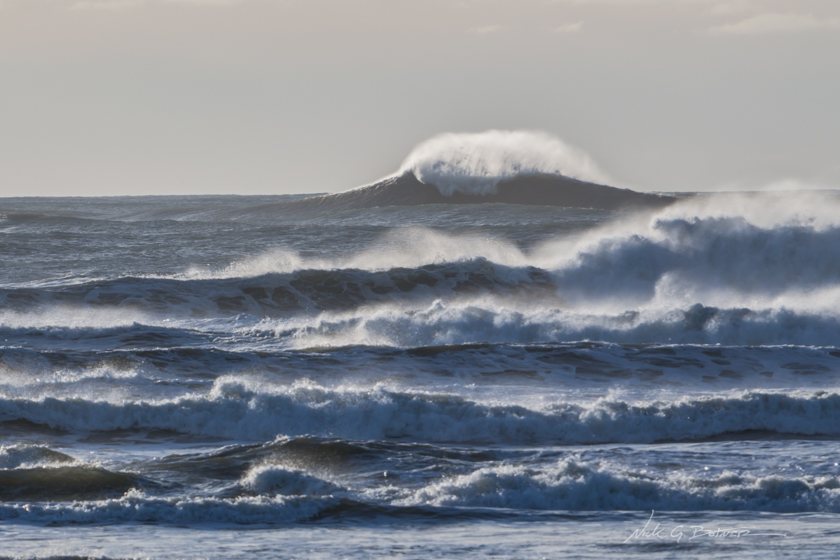 Every now and then a huge set would roll in and break on the outer bar. 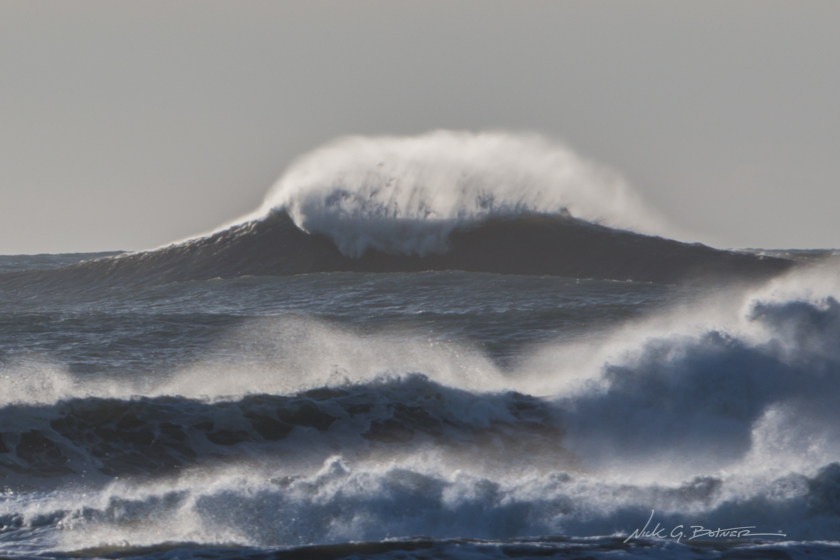 Judging from the scale, I would say the face of this wave is between 20ft – 25ft. It’s not a record wave, but that is still a big wave. 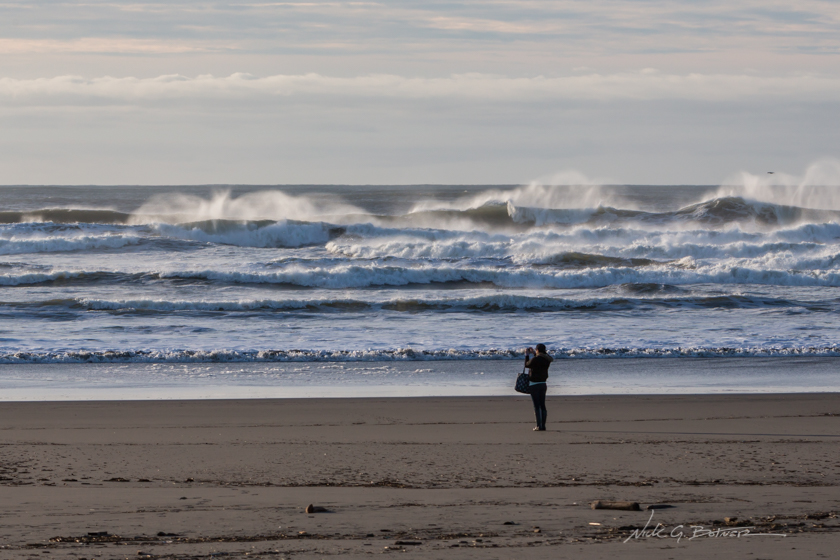 There was one other person out there who had the same idea as me. 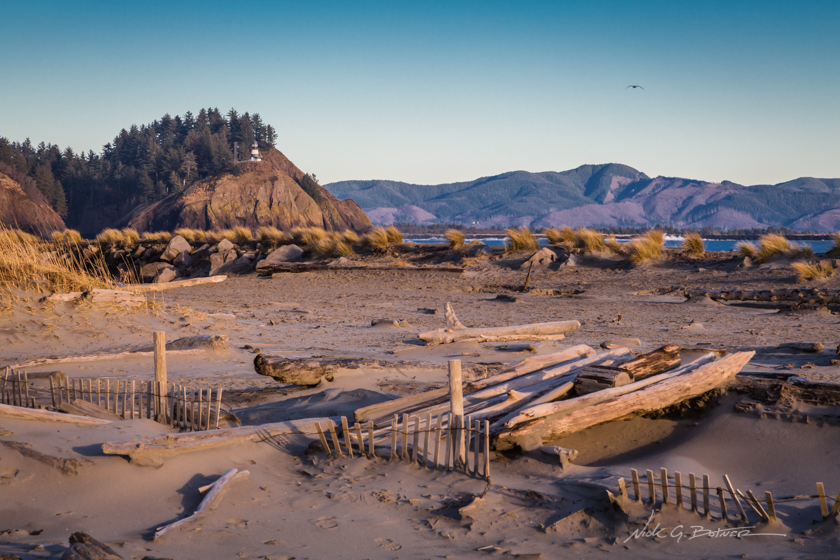 Looking back at the cape lighthouse, the setting sun was now starting to throw its warming colors over the landscape. 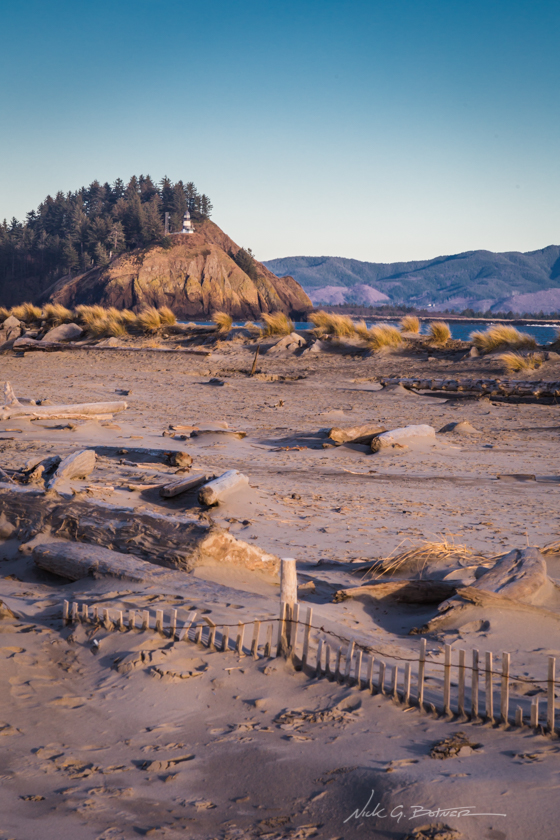 Another angle showing part of the retention fences. 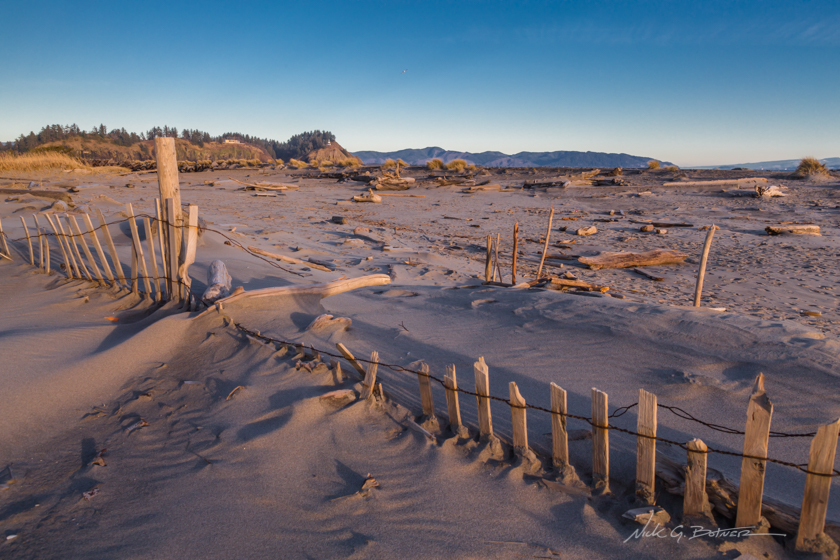 Not sure how well they work. But these fences were mostly ripped apart. 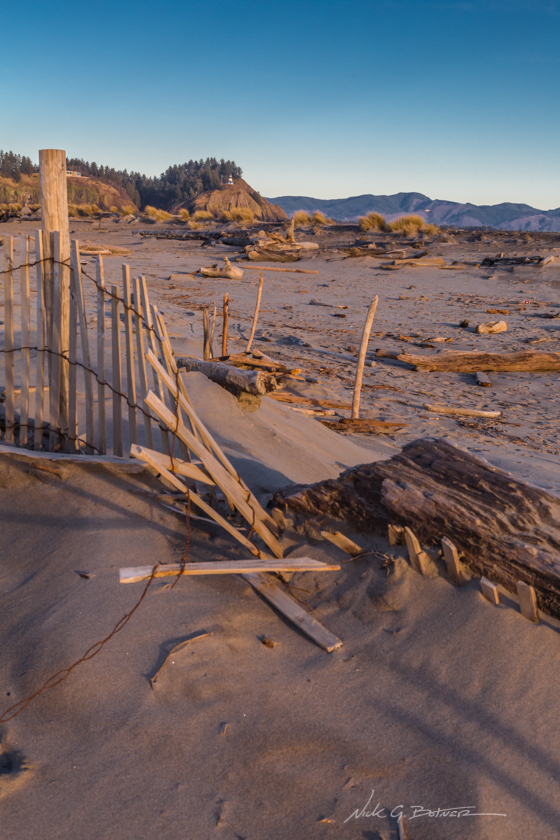 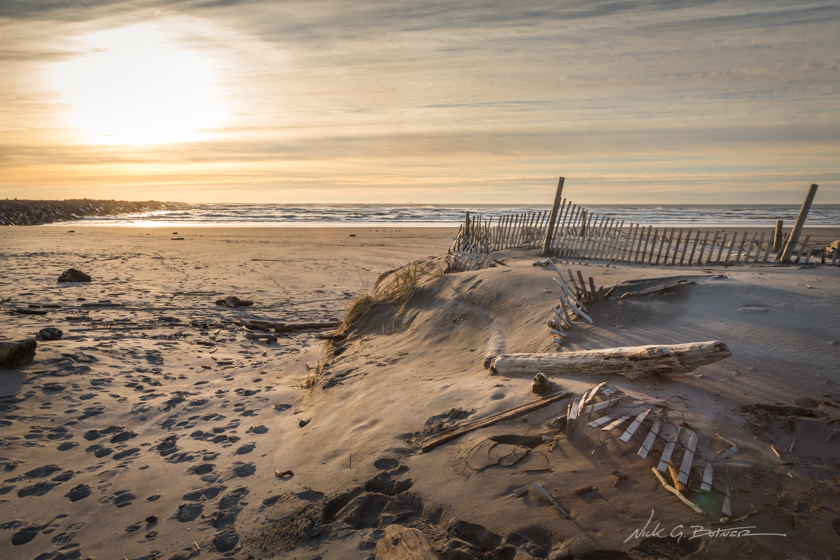 Seeing that the sun was now entering into a haze of clouds I was able to get just a couple more shots before the bright warm lights would go away. 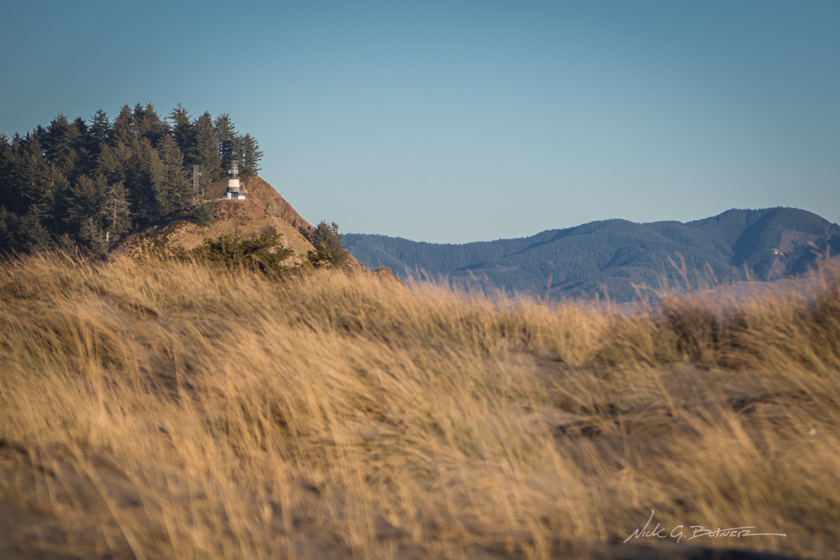 At this point I figured the golden light would almost be over so it was time to make the long hike back to the car. 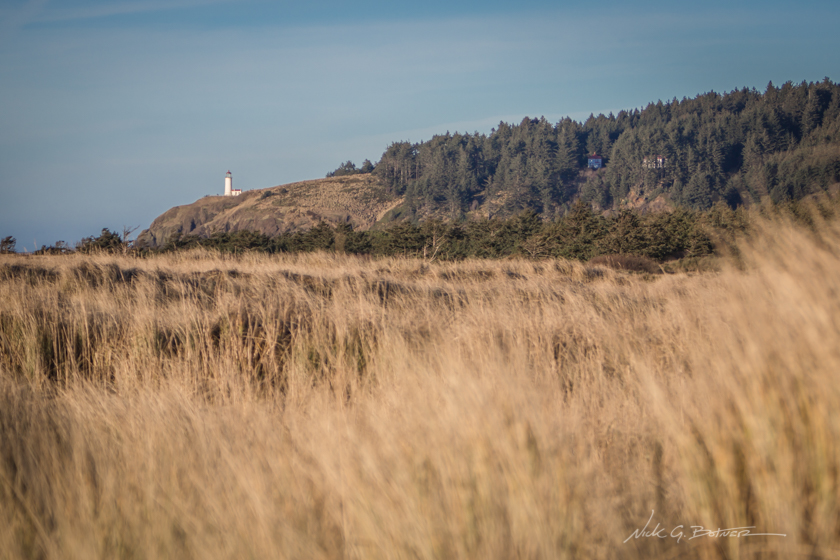 Just north of the cape is the North Head Lighthouse. This was as close as I made it to the lighthouse. I had planned to maybe check it out once I got the tent set up. But those plans didn’t end up working out. 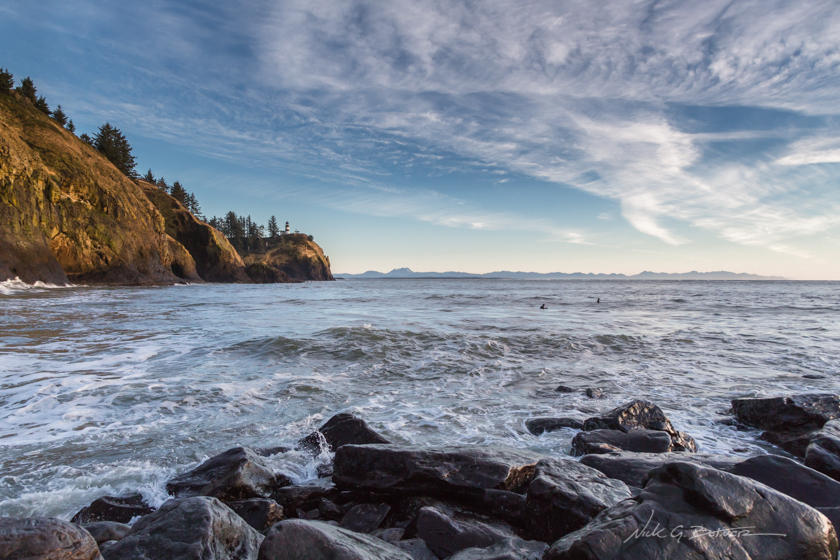 When I was previously driving out to the beach, I saw a location I wanted to come back to. It was a little cove area where the North jetty starts. It provided for an interesting angle on the cape lighthouse, so I scrambled down the rocks and posted up. 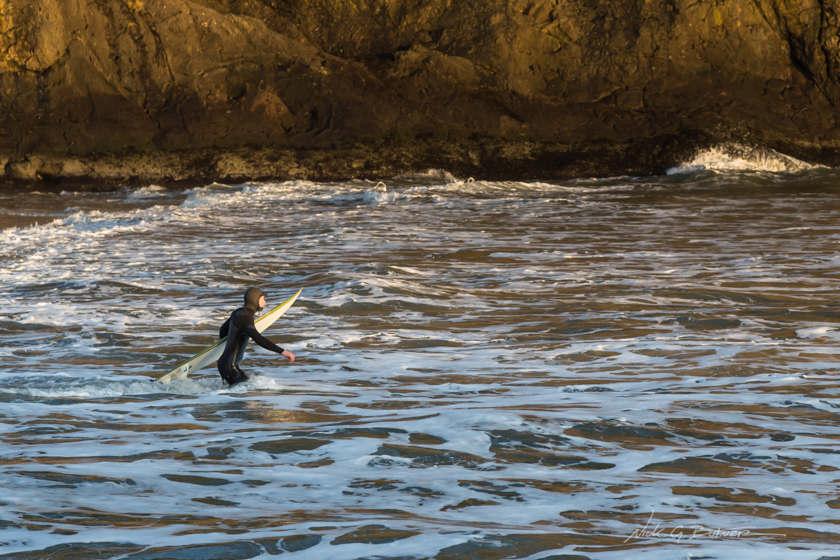 Even with temps in the mid thirties, a few surfers were making their way out to the break. 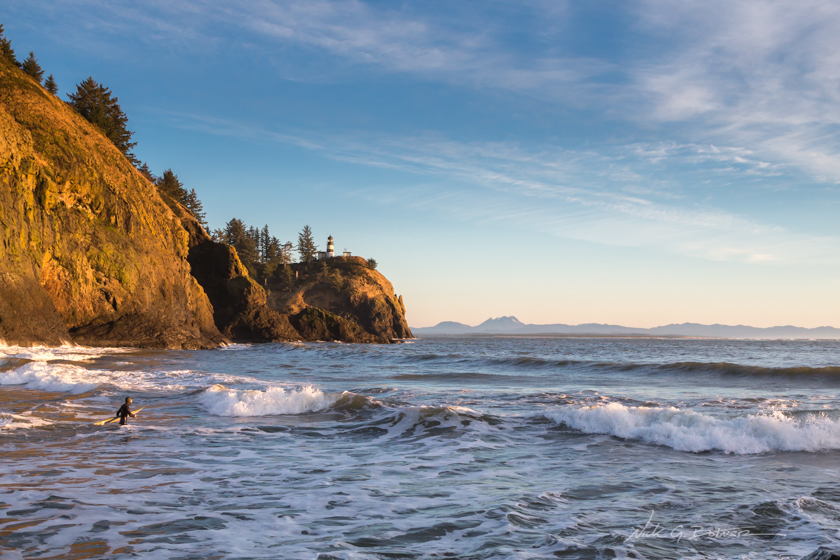 And just then, a small photographic miracle happened. The sun broke out of the clouds and momentarily casted its golden rays on the shore once more. 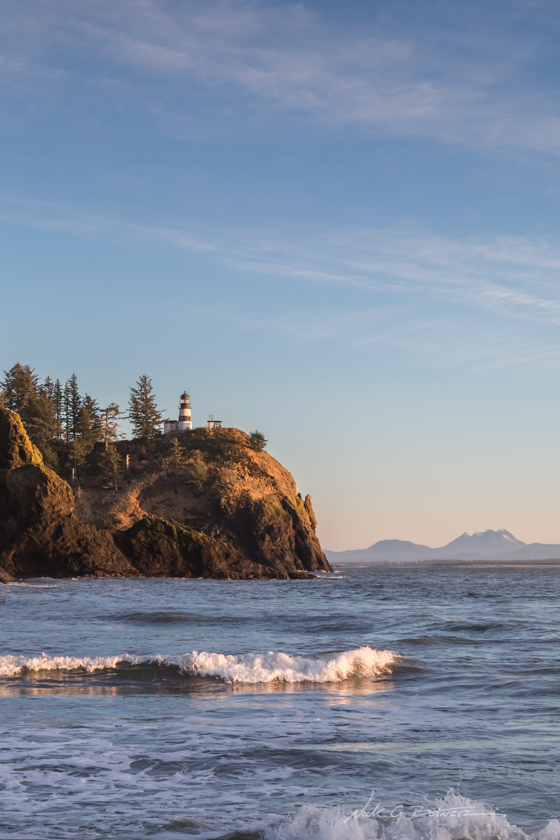 This was the view I was hoping for. 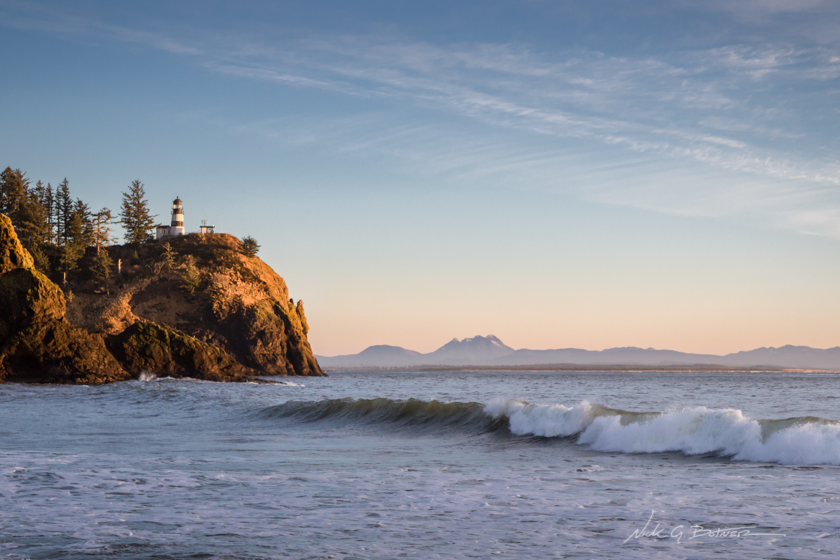 And luckily, within that tiny window of light, I got a set wave as well.

Right after that shot, the sun went back into the clouds and everything went cold. I hung around a little while longer but everything was just getting darker and uglier. It was time to pack things up and make camp for the night before things got too dark.

The night was cold. Dipping into the low thirties, I was easily awake by 6am and ready to break camp for the day.

On my way out the park, there was one last little trail I wanted to check out. Maybe I could get a good view of sunrise from the McKenzie Head lookout. As I went up the trail I realized I forgot my tripod. I knew I would need this, so I had to run back and grab it.

Returning up the trail I could see the sky was starting to change. “Shit” I yelled out and started to run up the steep trail.

Completely out of breath I forcefully tromped through the thorn bushes and scrambled to get the camera set up. 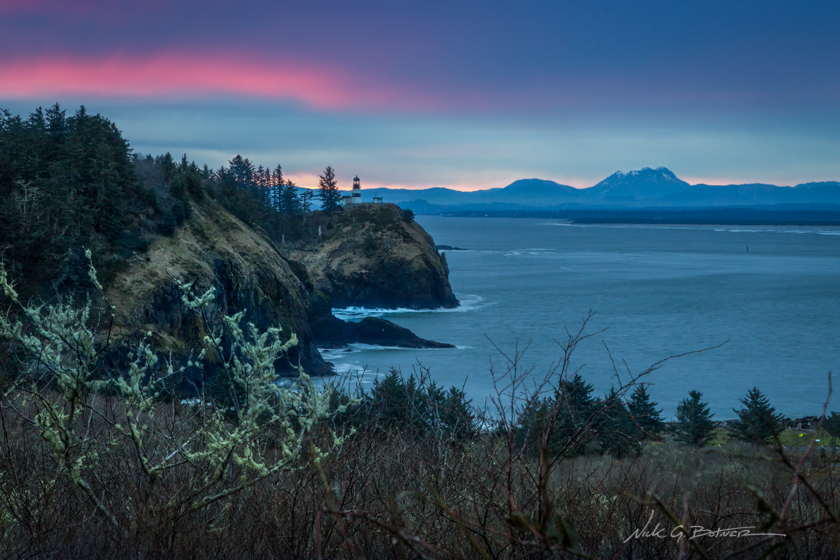 The reason for the rush was this amazing pink glow in the sky. And sadly, as amazing as those colors are, things were 10 times more impressive a mere 5 minutes earlier.

The photo above is the second photo I took, the first was a blurry mess. I stayed at this location and shot roughly 50 more photos on three different lenses. All of them paled in comparison to this shot. If only I hadn’t forgot the tripod I would have had the shot.

Even so, I am still impressed by the shot. I’m just happy I got up there and got something. Next time (tomorrow’s new camp site) I vowed to make the morning light no matter what. More on that one next post.

So in review. Cape Disappointment did not disappoint what-so-ever. The park is astonishing. The facilities are clean. The camp sites are plenty-full and in a great location to the beach and the rest of the park. This is definitely a location I want to come visit again in the summertime.

If you have the chance, make your way to Cape Disappointment. You wont be…err…you’ll love it. 😉 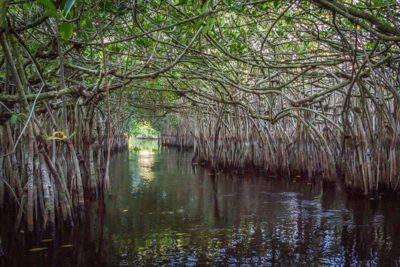